When, after 18 years, Stephanie Saharopulos left her job as retail manager at Barnes & Noble to pursue a career as a full-time DJ, little did she know that journey would lead to her to a place wholly unexpected: opening her very own plant shop, Peacock & Co.

“I ended up quitting to pursue that, which was crazy now that I think about it,” said Saharopulos. “It was really scary, I was one foot out, one foot in all the time. And finally, there was one day at work where I just felt it and I knew it was time to move on, and I didn’t look back.”

After years of sharing a space with designer Kimberly Latham’s East Village boutique, Anneise, Saharopulos just recently opened a shop to call her own a couple of miles away in Long Beach’s Alamitos Beach neighborhood, adding to the cluster of businesses on Cerritos Avenue and Third Street, including Lord Windsor Coffee.

One of the few pieces of good news during the pandemic—too often it’s a restaurant or a small business’s closure making the paper—Saharopulos’ move to 306 Cerritos Ave. brought many customers out on Friday, Aug. 14 as well as the following Saturday, with many of her longtime patrons being residents of the area.

“Everyone showed up, people waited, no one complained,” Saharopulos said. “It was really hot, everyone was so just lovely and gracious about everything and excited for me and excited to have this in the neighborhood because this truly is in the middle of a residential neighborhood.”

Saharopulos sources her plants from mostly wholesale growers from Hawaii and Florida and currently carries wares by two artists, ceramicist John Lawrence and handmade macrame hangers by Analy Arroyo. Now that she has the space, she’s hoping to bring in even more local artisans. 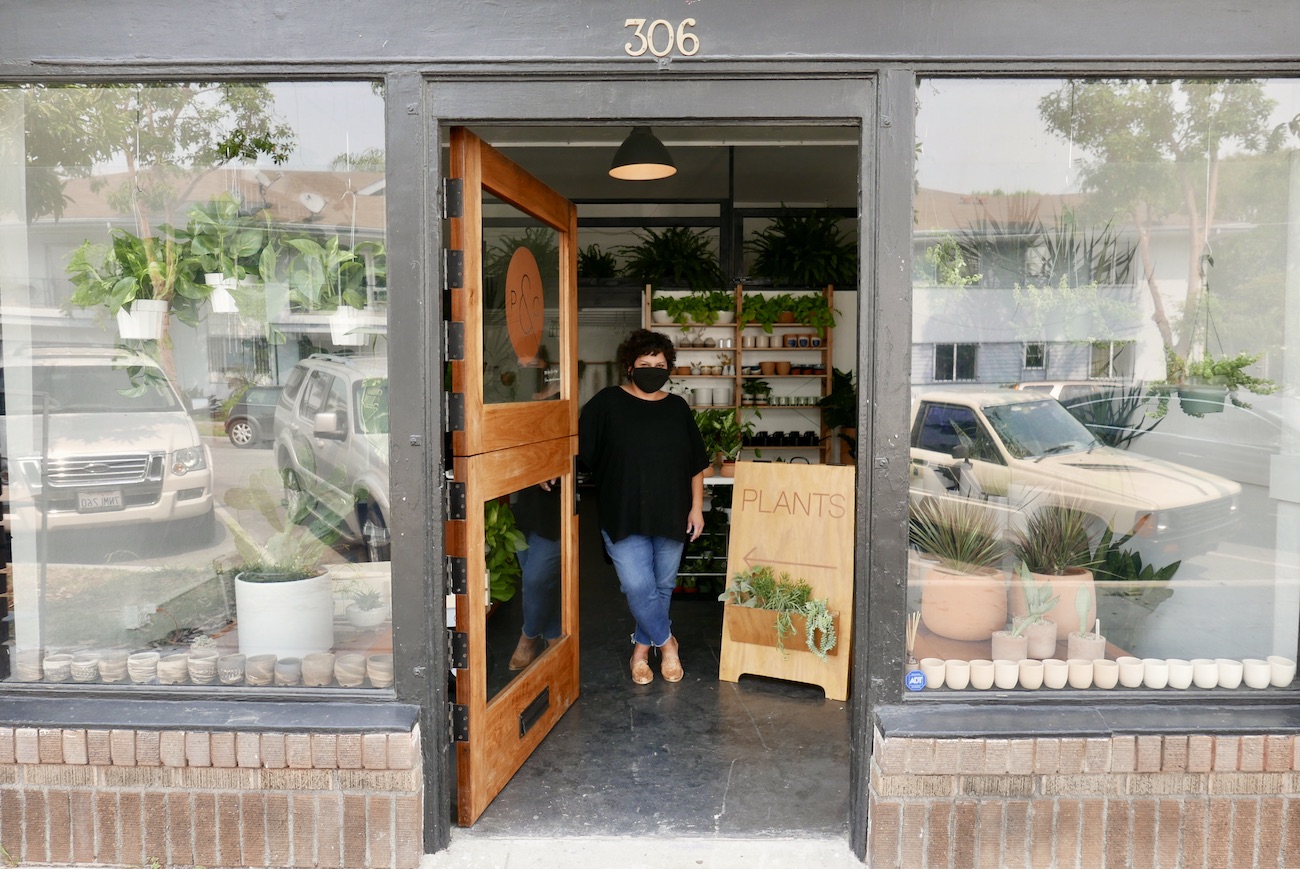 After quitting her job at Barnes & Noble, Saharopulos jumped into DJing, performing at everything from local weddings to art shows in Downtown LA. Invited to a trade show, she found that the booth she created to promote her DJ business, left her feeling more inspired than music. And while music certainly helped her climb out of a place where she was feeling stuck, having worked for a corporation for almost 20 years, she realized maybe it wasn’t music she wanted to pursue anymore.

“I knew I loved creating spaces so I wanted to see where that took me,” Saharopulos said.

Saharopulos said that during the pandemic, just being with her plants in the small, North Long Beach home she shares with her husband, has made her realize the importance of her work, how bringing plants inside requires you to connect with the outdoors and why running Peacock & Co is so fulfilling to her.

“You start to see them [your plants] grow and I think that is when it’s really something special, because it’s like, I’m taking care of this living thing,” said Saharopulos. “That is something I think, even for me hit home, which is kind of crazy because I’ve owned a plant shop for six years.”

One reason why she’s always wanted her own space is to be able to do anything she wants with it. A creative first and foremost, and a businesswoman second, Peacock & Co is something she can always recreate, from bringing in new elements, from the music to the smell, to the types of plants and home goods she carries, it’s Saharopolus’ full heart her customers get to experience every time they set foot in her store. 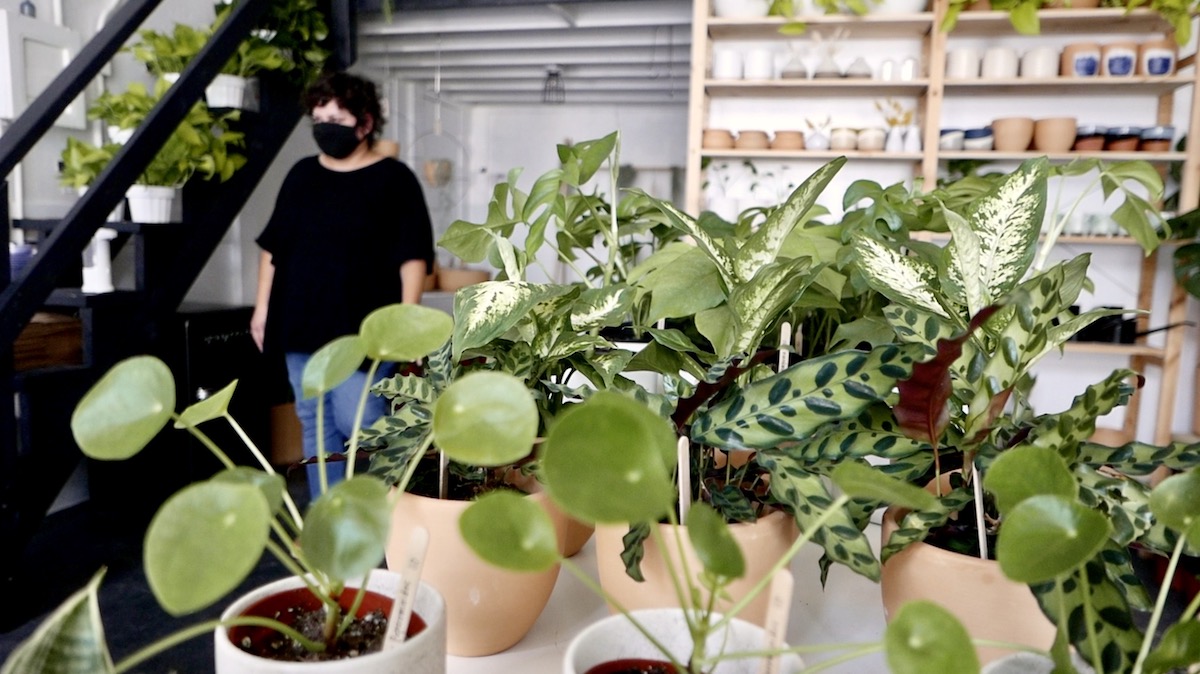 Owning her own business is a dream she’s had since she was young, but how that’s taken form over the years has been quite an evolution. The name Peacock represents “the umbrella of services,” from event coordinating to DJing to selling housewares, that Saharopulos has offered. She’s wanted to change the name many times, but her fan base has always urged her not to.

When she introduced, the “& Co” to Peacock, a question arose, “Who is the & Co?” Saharopulos tells her customers, “the ‘& Co is you! I feel like it’s my community,” she said.

When she first popped into Anneise nine years ago to hand Latham her card, Saharopulos struck partnership gold. Latham, who had opened Anneise in 2011, was trying to activate the East Village Arts Park—a hidden, often unused plot of green space down the block and around the corner from her tiny 114-square-foot shop. She asked Saharopulos to DJ services for a series of weekly lunchtime gatherings she’d set up there.

The two went on to collaborate on several events for the East Village, but it was in 2014 that Latham invited Saharopulos to share her space selling home goods and a few plants; Saharopulos’ passion for DJing, and later event planning, having turned into a love for helping people create beautiful spaces in their homes.

“We’ve always been able to work out ideas for a better outcome,” said Latham. “It was never her way or it was never my way, it was how do we meet in the middle, how do we get an even better solution to what we both want to do? I think the thing I’ll miss is the direct collaboration. It feels great, helping anybody out with a shop and then seeing them go off and do it on their own, it’s awesome.”

“Those six years were so fun, I learned so much, and I learned so much from Kimberly,” said Saharopulos. “Through that, I realized plants are a huge part of making a space look beautiful, and we evolved into a plant shop.

“You want to be in a place that makes you feel something, and there’s something about that, that I love, and just the process of that is what I think keeps me going. I can be creative all day long.” 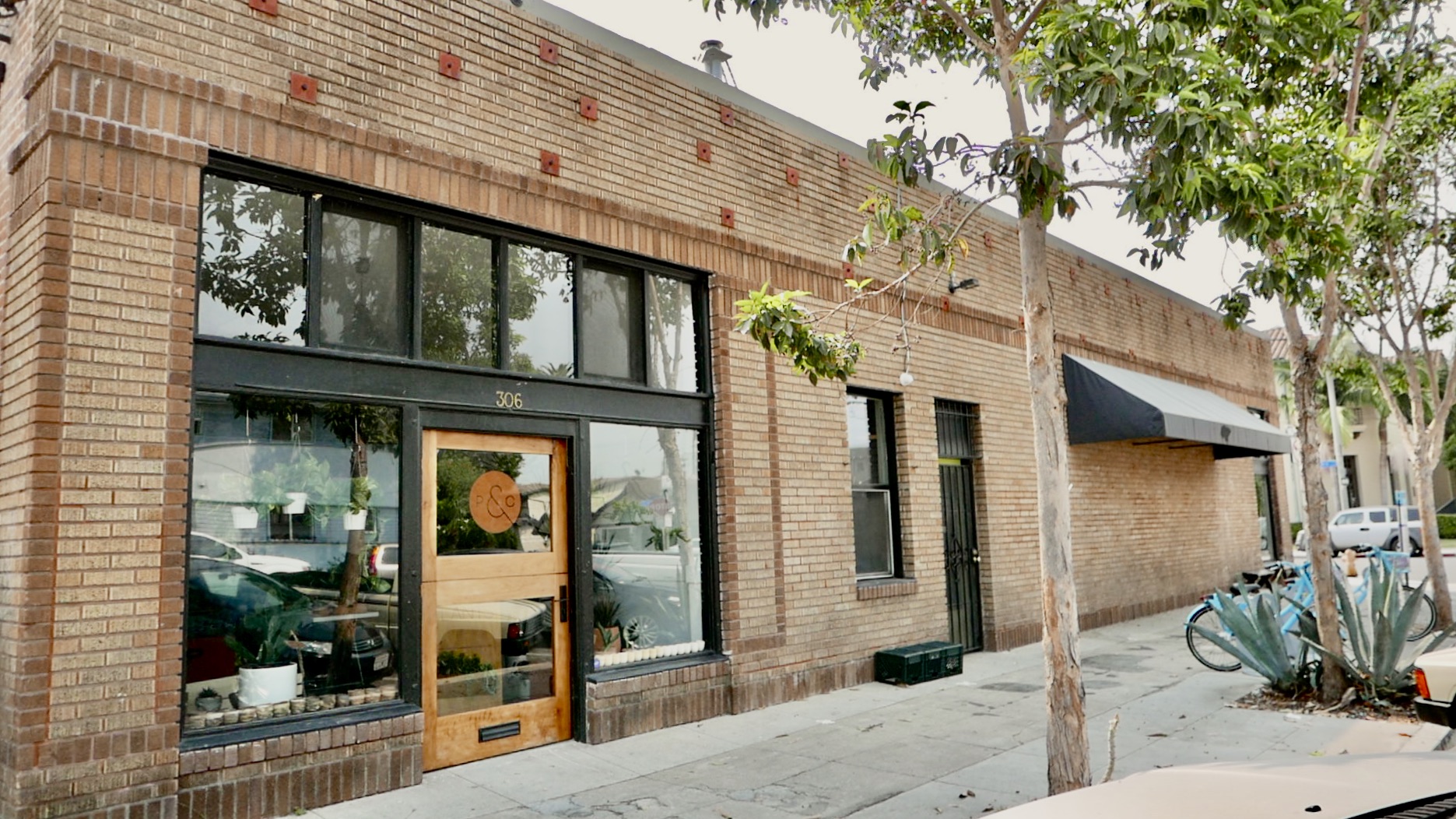 Peacock & Co.’s new space is located at 306 Cerritos Ave. Two people are allowed in the shop at a time, wearing a mask and maintaining social distance is required. For more information on visiting, pick-up options and hours, visit wearepeacockandco.com and check out the Instagram @peacockandcompany.