How to make a holiday charcuterie board, according to Long Beach cheese experts • the Hi-lo
- ADVERTISEMENT -

Grazing board, snack board, “charcoochie,” whatever you want to call it, the holidays are the season for charcuterie boards.

I’ve been getting into these tasty snacks by having themed movie nights where we have a snack board and cocktails that match the movie (like PolyJuice Potion cocktails for Harry Potter night). But all I really do is pick up some cheese, salami, crackers, dried fruit and dips from my local Aldi. Maybe I’ll get a little crazy with a log of goat cheese rolled in cranberries, but I’m not really making a fancy charcuterie with flavor pairings and (insert posh accent) “just a hint of rosemary that brings out the flavor of the fig and does another thing.” 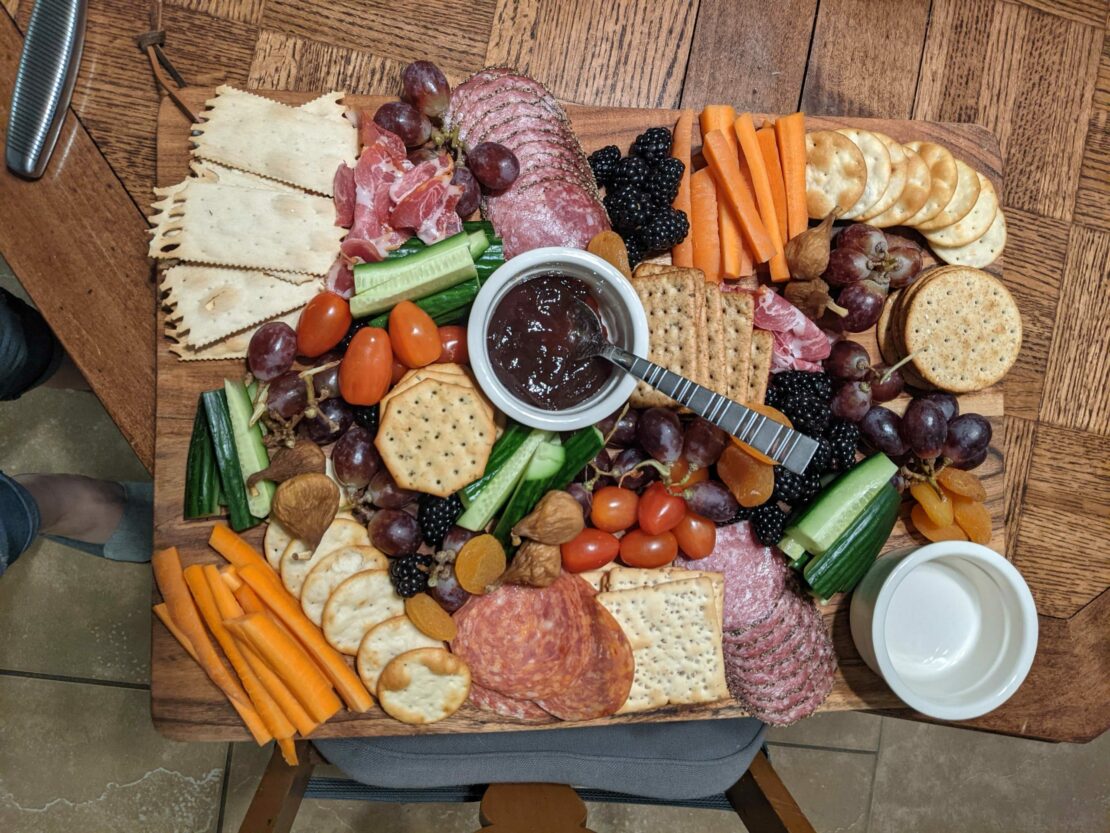 A still pretty impressive rookie charcuterie board I made before becoming a master at Oh La Vache. (Not pictured: the cheese on a separate board for allergy concerns). Photo by Valerie Osier.

I want to do it up proper for the holidays— bring out the best charcuterie practices if you will.

So I went to the experts I knew of at Oh La Vache cheese shop on Fourth Street and asked them to show me the ropes. Owners Erika Pozo and Jessica Sarwine were nice enough to give me a crash course this week.

The first thing Sarwine told me was that, despite my posh expectations, there are actually no rules to cheese boards: “Do what makes you happy,” she said. But, if you’re like me and need at least some guidelines so you don’t end up with eight different kinds of cheese in your fridge, she gave me starting points.

First things first: cheese. It shouldn’t be surprising that the local cheesemonger suggested starting there. Go with three kinds of cheese in different textures: soft, medium and hard. Sarwine also suggested going for different milk sources for a nice varied board, calling cow, goat and sheep the “holy trinity” of cheeses.

Layout the cheese first, with your softer cheese, like brie, staying in its original shape so it doesn’t run everywhere as it warms. She suggested cutting your medium cheese in cubes or triangles and try to cut the harder cheeses, like pecorino, in thinner shards because they can have a strong taste. Sarwine tends to go for an anchoring technique, with two of the cheeses in adjacent corners of the board and the third in the center across.

Once you get your three main kinds of cheese, try to pick a cheese with a stronger flavor, like bleu cheese, cheddar with onions or a blueberry goat cheese, she said. 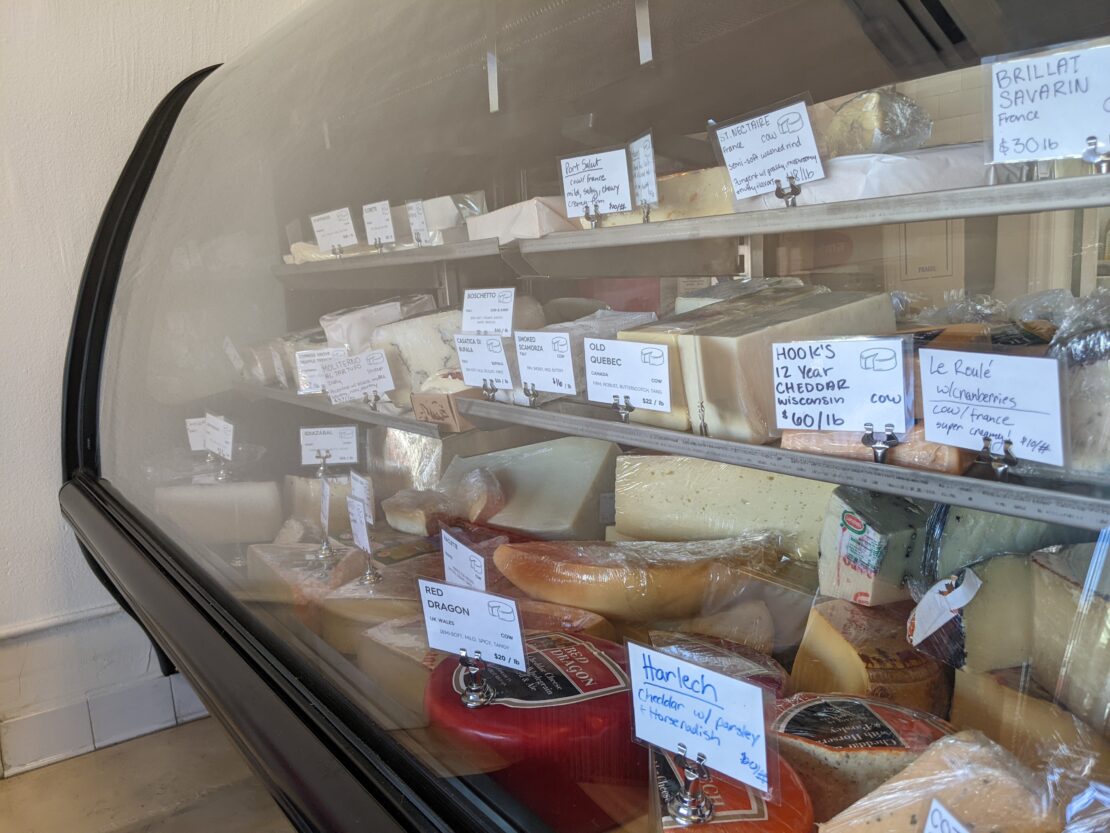 Some of the available cheeses at Oh La Vache shop on Fourth Street. Photo by Valerie Osier.

Again, the idea here is to vary textures and flavors: a harder salami, a softer prosciutto and something with heat. Once you place your cheese anchors, you can roll up or ribbon the salami in the empty spots and place the prosciutto in a loose pile.

As for portion planning, if the board is meant as a snack or appetizer, plan for two to three ounces of meat and cheese per person. If it’s going to be the main course, plan for about four to five ounces per person. But, “there’s nothing wrong with leftover cheese,” Sarwine said.

She also urges you to get experimental with your placement—make a salami river down the board or try your hand at salami roses.

When it comes to bready things, again mix up the textures. Get a nice baguette or freshly baked bread, then get a rosemary cracker and a nice sourdough cracker, Sarwine said. There are still no rules but aim for a more basic cracker and a more fancy one (rosemary is pretty fancy to me). Either lay out the crackers around the meat and cheese or keep them on a separate plate to plan for dietary restrictions.

After the meat, cheese and bready things have their spots on the board, start to fill in the rest of it with other accouterments, Sarwine said. Start with something salty, like pickles and olives. Then go with something sweet, like a jam.

As for the flavors, since most cheeses are salty, sweet things tend to go well on boards. There are some flavors that play better together, like bleu cheese and honey or fig jam with almost any cheese, she said. One combination she’s recently discovered is Moliterno al Tartufo (a Peccorrino infused with black truffles) paired with honey.

A last piece of advice from Sarwine:

“The key takeaway is to not be intimidated and have fun. And play around with it: Practice does help you figure out your own style and what you’re into. And when all else fails: YouTube.” 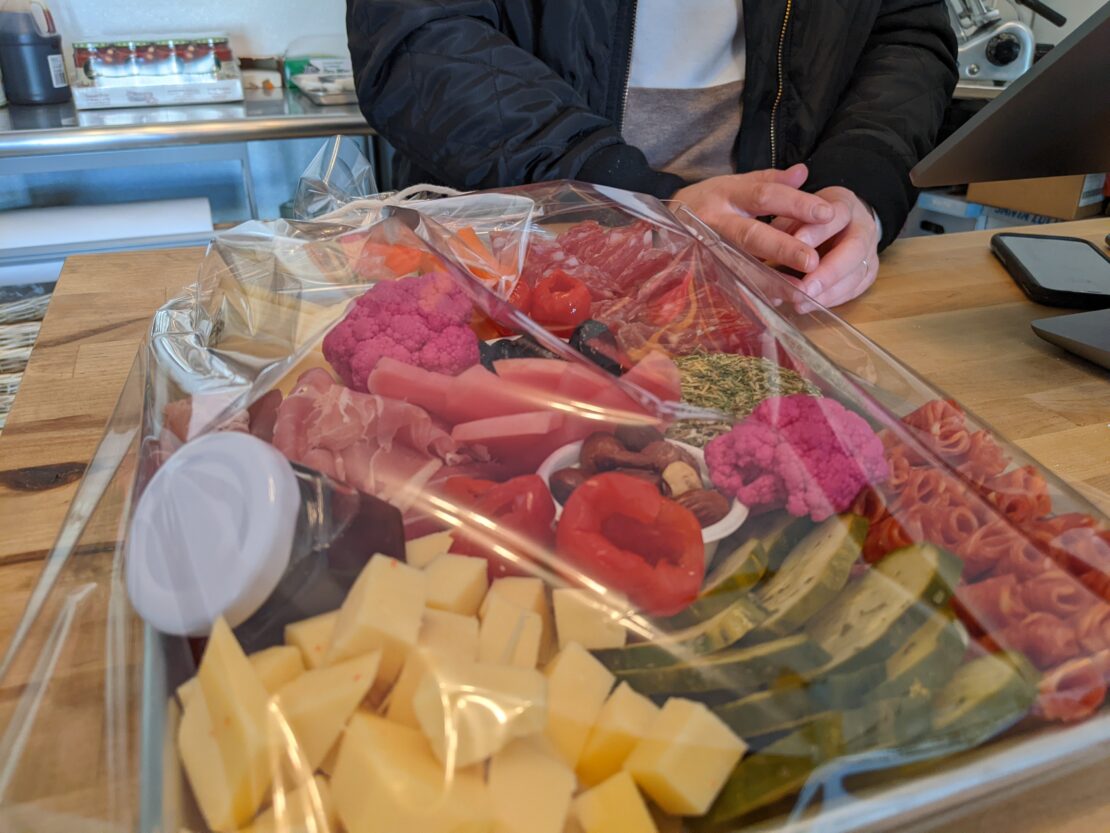 A custom charcuterie board for a customer at Oh La Vache. Photo by Valerie Osier.