From a parklet stationed at the corner of Anaheim Street and Stanley Avenue Friday evening, the smells and sounds of sizzling street tacos permeated the air. Guests sitting on wooden picnic tables sipped beer and cocktails, chatting and joking among themselves. Television screens glowed with Game 3 of the World Series.

Friday’s grand reopening was a big win for Supply and Demand, which saw a sizable turnout of guests filling nearly all of their available patio space. As the new kids on the block, the bar and music venue at 2500 E. Anaheim St. had been opened just shy of seven months before the pandemic.

What was formerly the Blacklight District, a dive bar and music venue known for its punk and metal lineups, its poor Yelp reviews and infamous feature on season six of Bar Rescue, was bought and revamped by husband and wife Kevin and Erica Norton with Jair Aguirre. After spending a small fortune on much needed renovations, Supply and Demand saw its first patrons the end of July 2019.

Just as the Zaferia venue was starting to get its footing, along came the pandemic and its stage went dark. While they’ve been making the most out of their space as a studio for a weekly live music stream on Twitch, in tandem with SOS Booking & Productions, after nearly eight months without patrons, they’re just happy to see new and familiar faces.

Like other bars that have recently reopened, Supply and Demand’s reopening is contingent on operating as restaurants do. Patrons are served outside at tables spaced six feet apart and food is always on the bill. 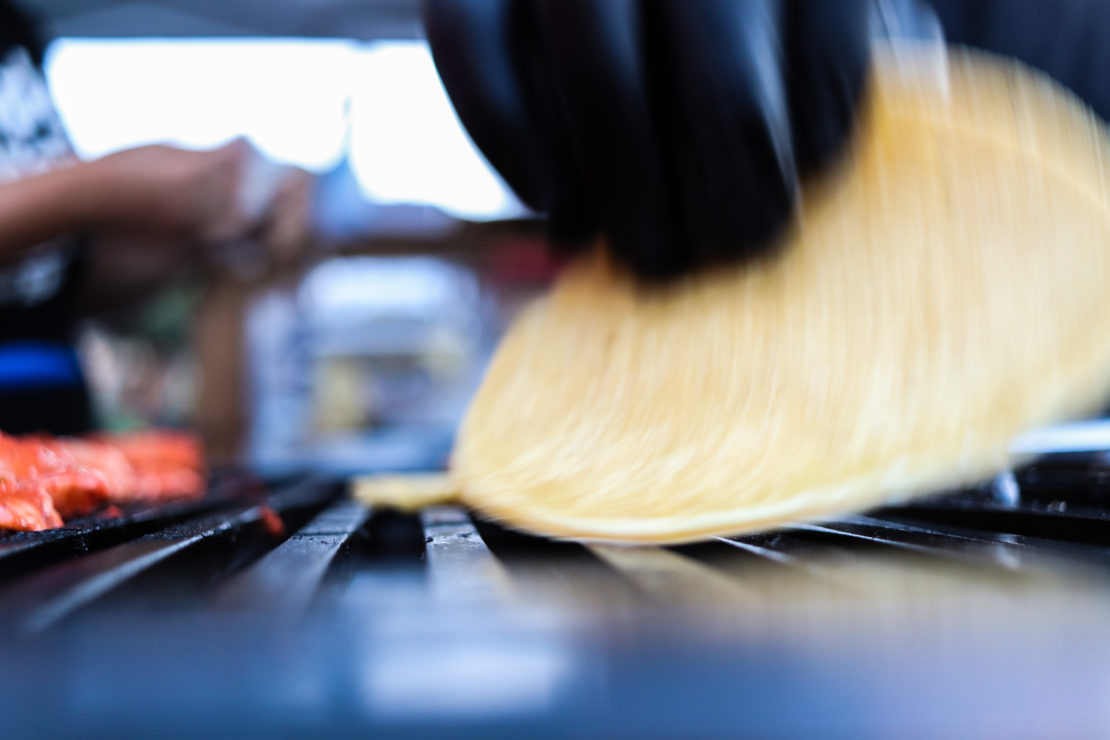 Chef Dennis Johnston flips one of the handmade from scratch mesa (corn) tortillas on the grill of the LBC Tacos cart at Supply and Demand Friday, Oct. 23, 2020. Photo by Cheantay Jensen.

While the bar is still in the process of rehiring staff and ironing out the kinks until they can resume full-time operations, Supply and Demand will be open for limited hours Thursday through Sunday from 5 to 10 p.m. 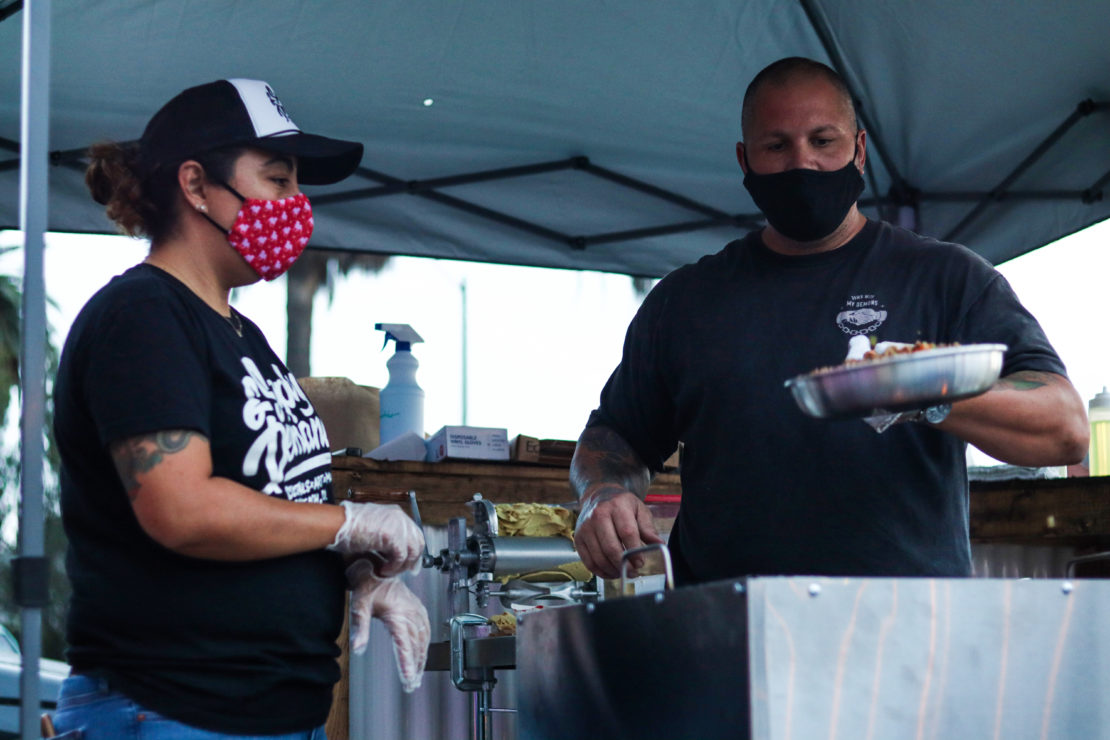 Operating the LBC Tacos food cart Friday evening was Supply and Demand co-owner Erica Norton and Dennis Johnston. Johnston is chef with over 25 years in the industry, four of those years spent as the executive chef for US Foods. Johnston is also a carpenter, owner of ARC Woodworks and Fabrication, and built the bar’s new parklet, which he said took about four days. Photo by Cheantay Jensen.

Sound engineer Jazz Straub, 29, laughs with his colleagues from SOS Booking & Productions on the parklet space adjacent to Supply and Demand during their grand reopening Friday, Oct. 23. Photo by Cheantay Jensen. 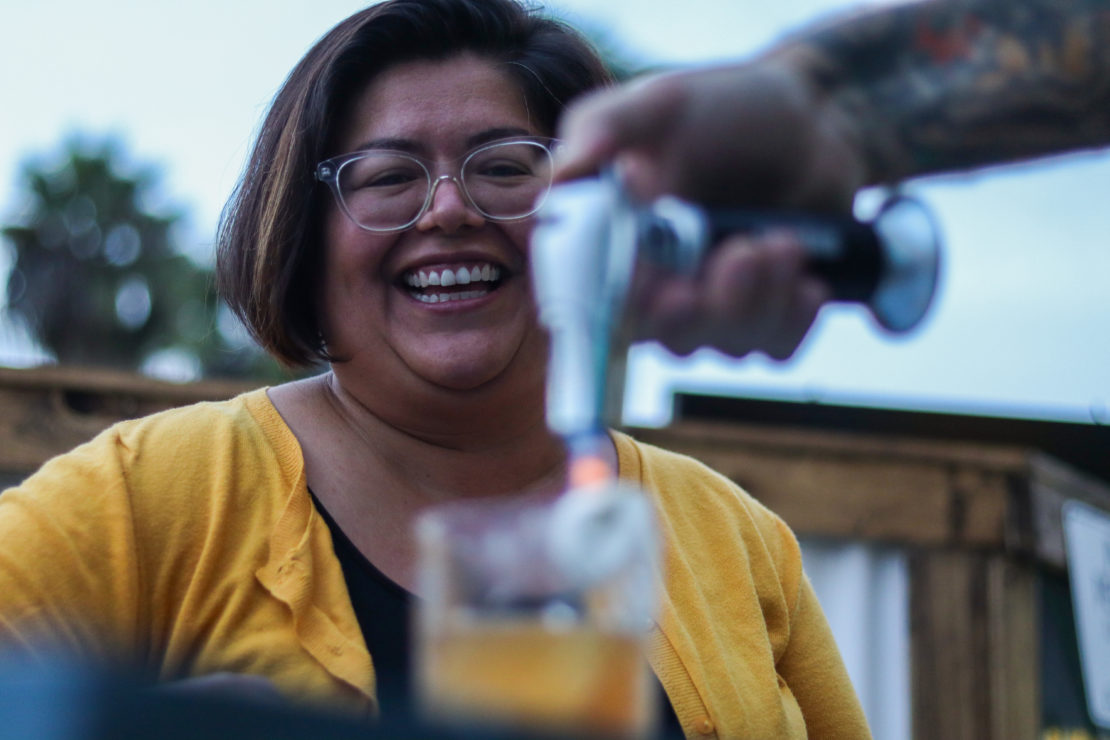 Local Sara Garcia watches bartender Damon Dagger toast the marshmallow garnish on her bourbon-based cocktail. “This place is my go-to spot, my watering hole,” Garcia said, who lives just a few blocks away from the bar. “I love the people here.” Photo by Cheantay Jensen. 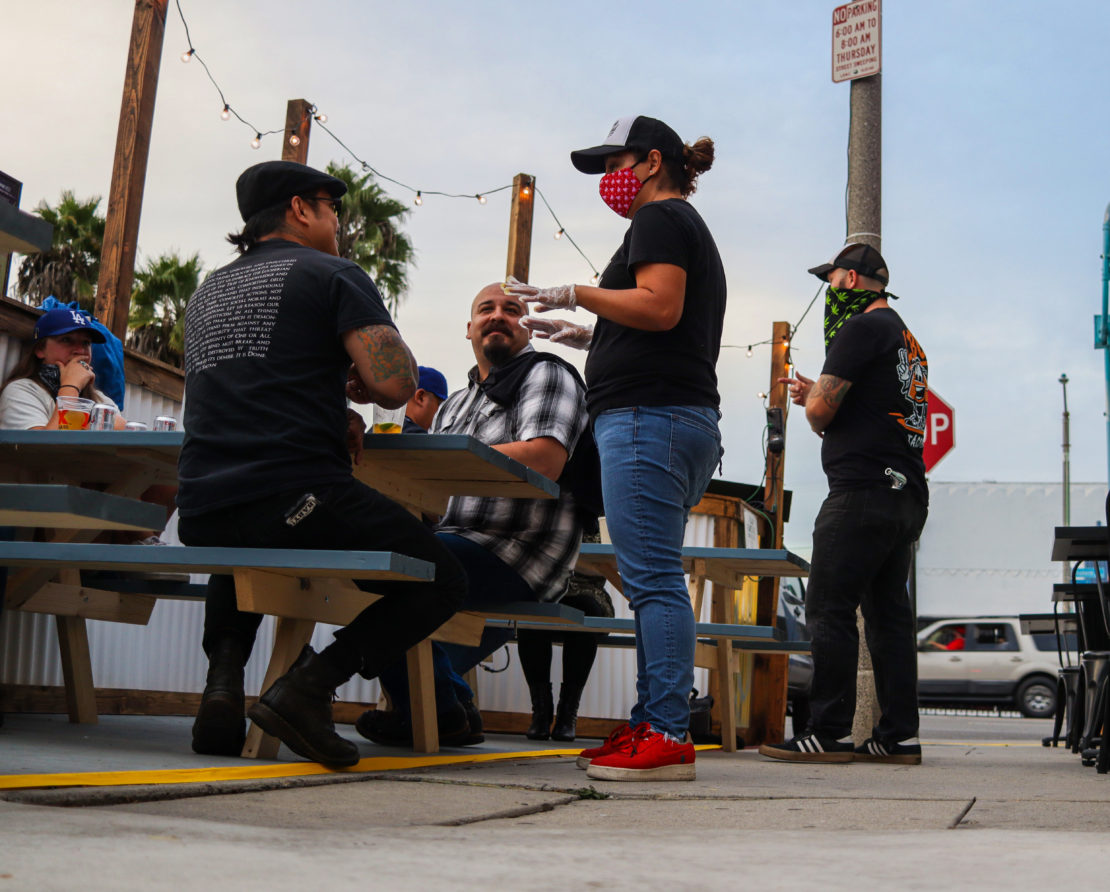 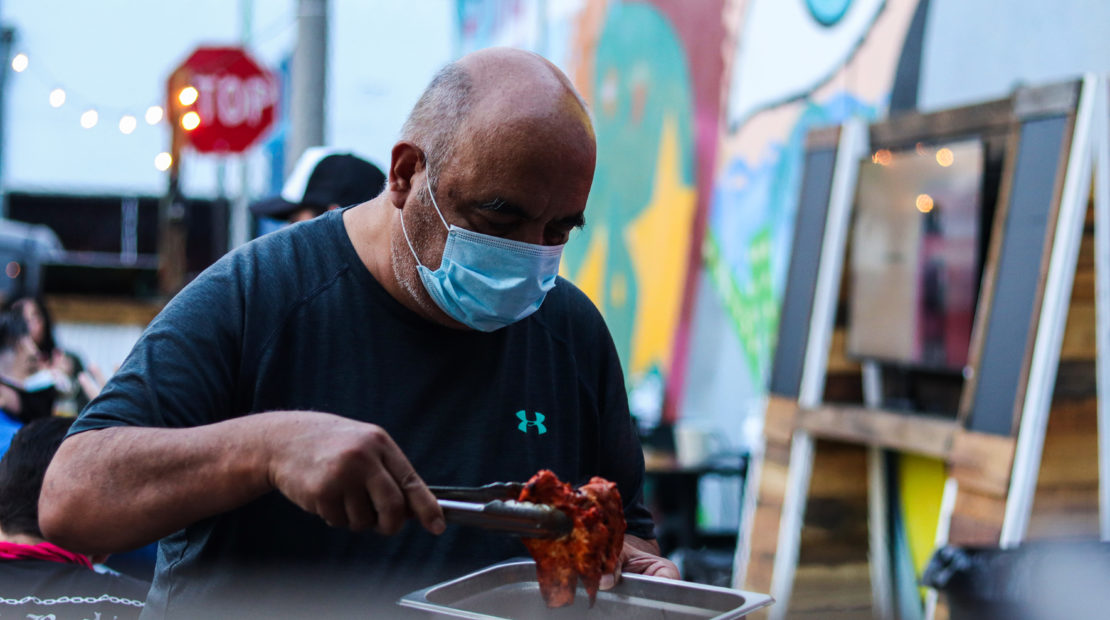 Supply and Demand employee Hannah Gillies watches Game 3 of the World Series from her table outside. Gillies said she’s known Erica Norton for years, helped open Supply and Demand last year and helped the business owner open The Socialist before that. Photo by Cheantay Jensen. 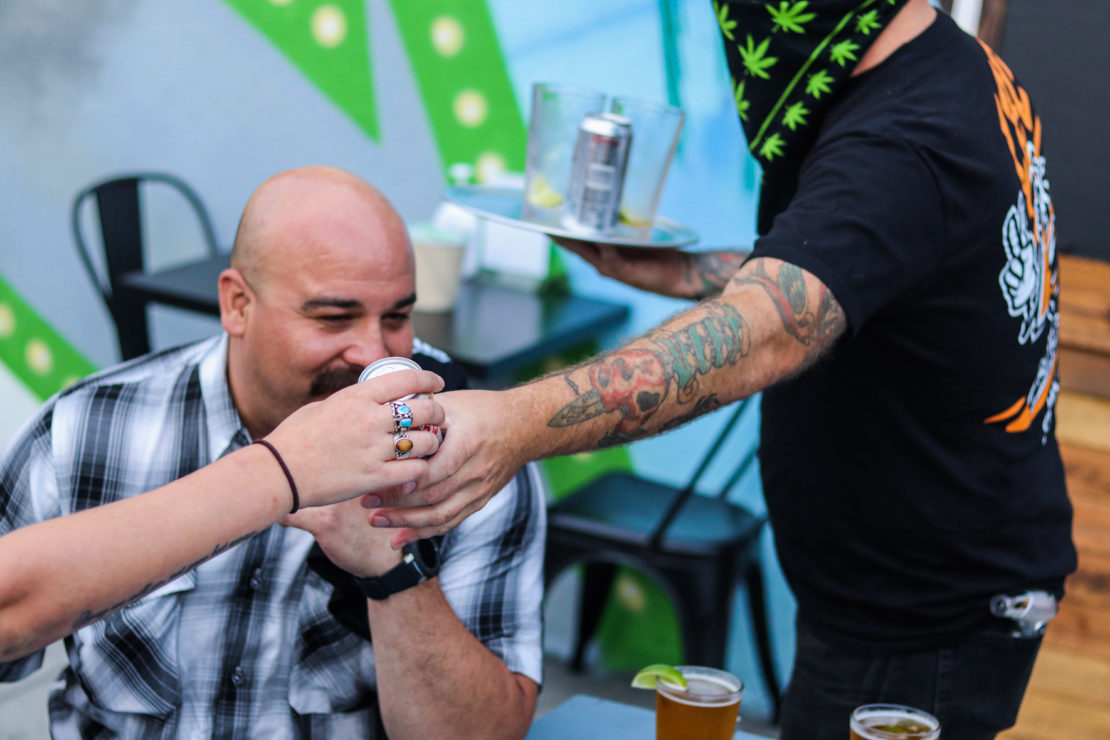 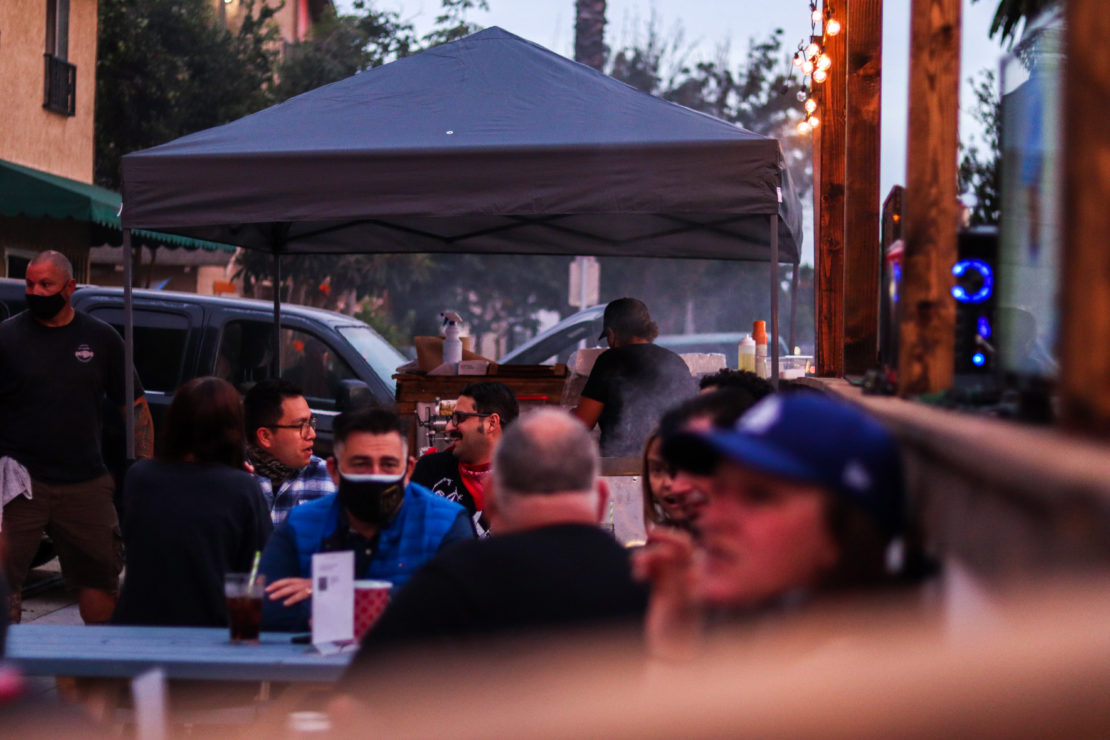 Supply and Demand saw an impressive turnout with patrons filling nearly every available table. The LBC Tacos cart, the brainchild of owner Erica Norton, stands on the north end of the parklet. Photo by Cheantay Jensen.