IN PICTURES: Live music mainstay Alex's Bar reopens for business, with food offered by Out West Kitchen • the Hi-lo
- ADVERTISEMENT -

It was an auspicious weekend for Zaferia District which saw the return of not just one, but two bars reopen for business, including live music mainstay Alex’s Bar.

The bar, located on 2913 E. Anaheim St., announced its soft reopening Friday and its grander one Saturday over social media featuring a photo of their new 100 capacity parklet, which encompasses nearly 3,500 square feet of the venue’s parking lot.

After being closed for nearly eight months, owner Alex Hernandez was evidently in high-spirits during Saturday’s opening, saying “it feels like a thousand pound weight has been lifted from my shoulders.”

Like other bars, Alex’s operations are contingent on taking up the many aspects that restaurants do. Temperatures are taken at the door, guests are served outside at tables spaced at least 6 feet apart, and food must be on the same bill with alcoholic purchases.

Harbor Bar’s chef Erik Simmons, who owns Out West Kitchen, reached out to Hernandez once he learned that the city would allow bars without fully licensed kitchens to reopen with a food service—a concession the Long Beach Bar Coalition had been appealing the city for since the end of August. While the menu will be rotating, patrons can choose from a selection of Out West’s specialty grilled and smoked meats (tri tip, pulled pork, chicken and pork hot links), barbecue wings, and a slew of other Southern-inspired appetizers and side dishes. Patrons can access the menu by scanning a QR code on their phone and order their meals from bar staff.

While the venue won’t be able to host live music—state law currently doesn’t permit any kind of live entertainment—the parklet does feature a few TVs, including a projection screen at the front of the space. Game 4 of the World Series was Saturday’s entertainment, but Hernandez said he plans to show pre-recorded episodes of his recent live-stream initiative in the future.

Alex’s Bar will be operating at limited hours, Friday and Saturday from 4 to 11 p.m. and on Sunday 2 to 9 p.m. The bar may open up Tuesday and Wednesday for the World Series games, Hernandez said. You can keep up with their operation hours on their Instagram or Facebook pages. 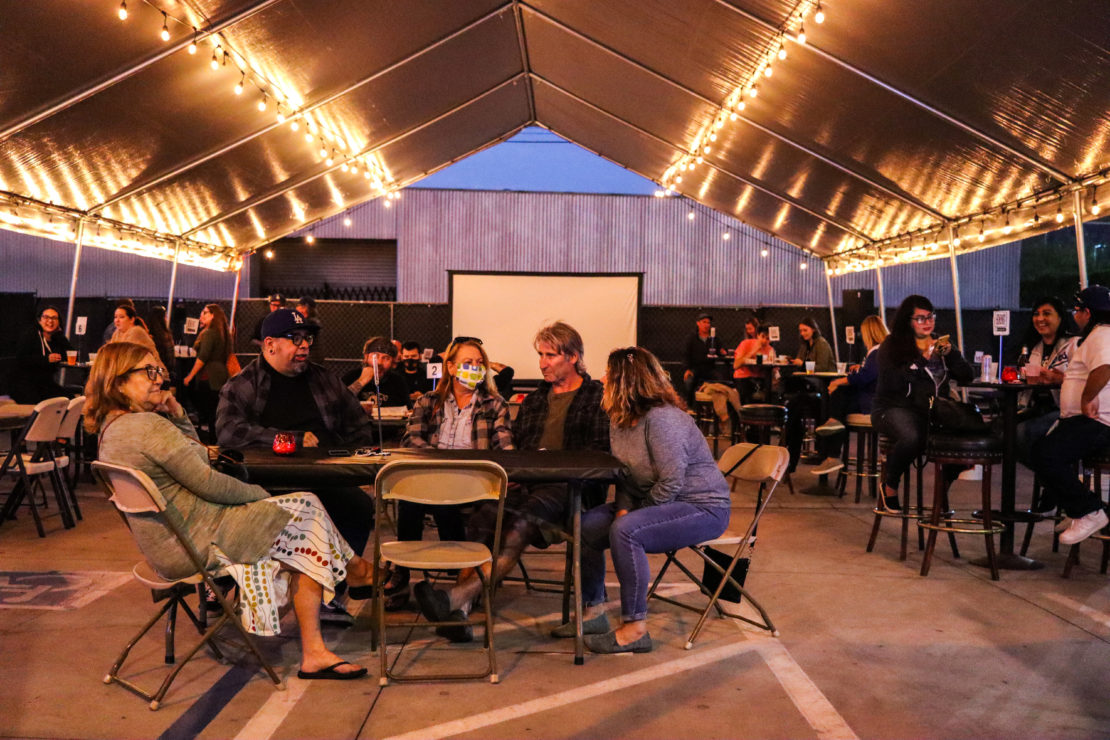 Alex’s Bar’s new parklet, arguably the largest in the city so far, can safely accommodate 100 patrons. The space is about 3,500 square feet and allows for tables to be spaced farther than the standard 6-foot rule. Photo by Cheantay Jensen. 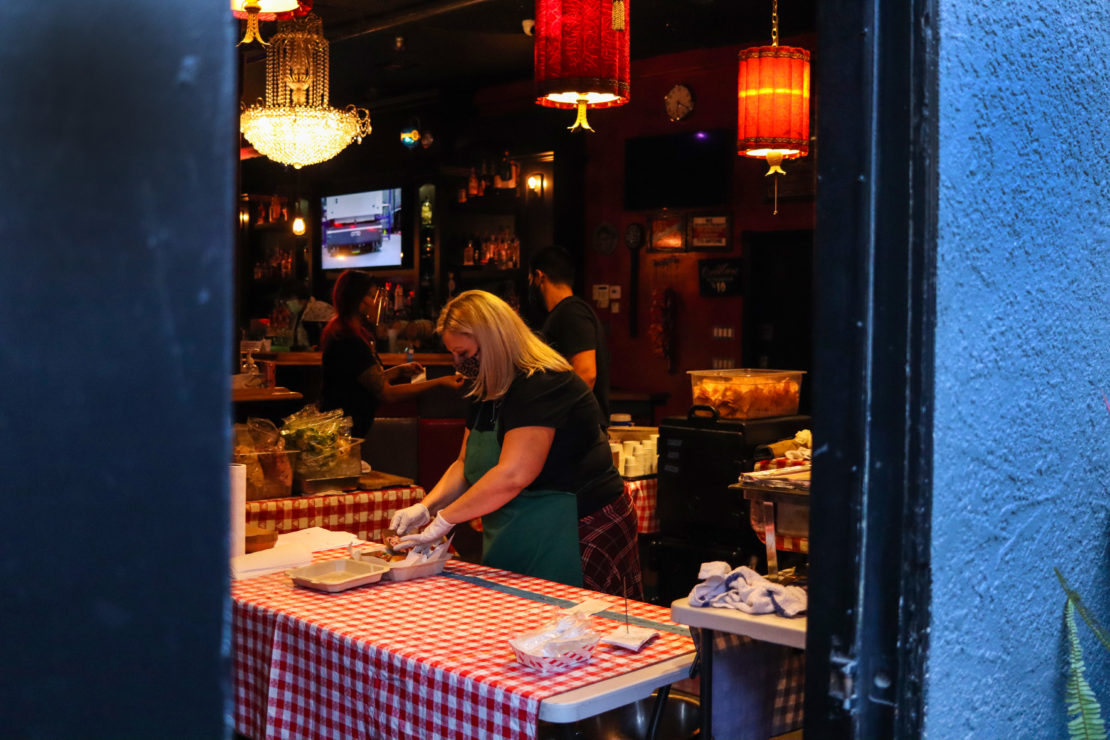 Krista Robinson helps prepare food provided by Out West Kitchen from inside the bar during the Alex’s Bar grand opening Saturday, Oct. 24, 2020. Photo by Cheantay Jensen. 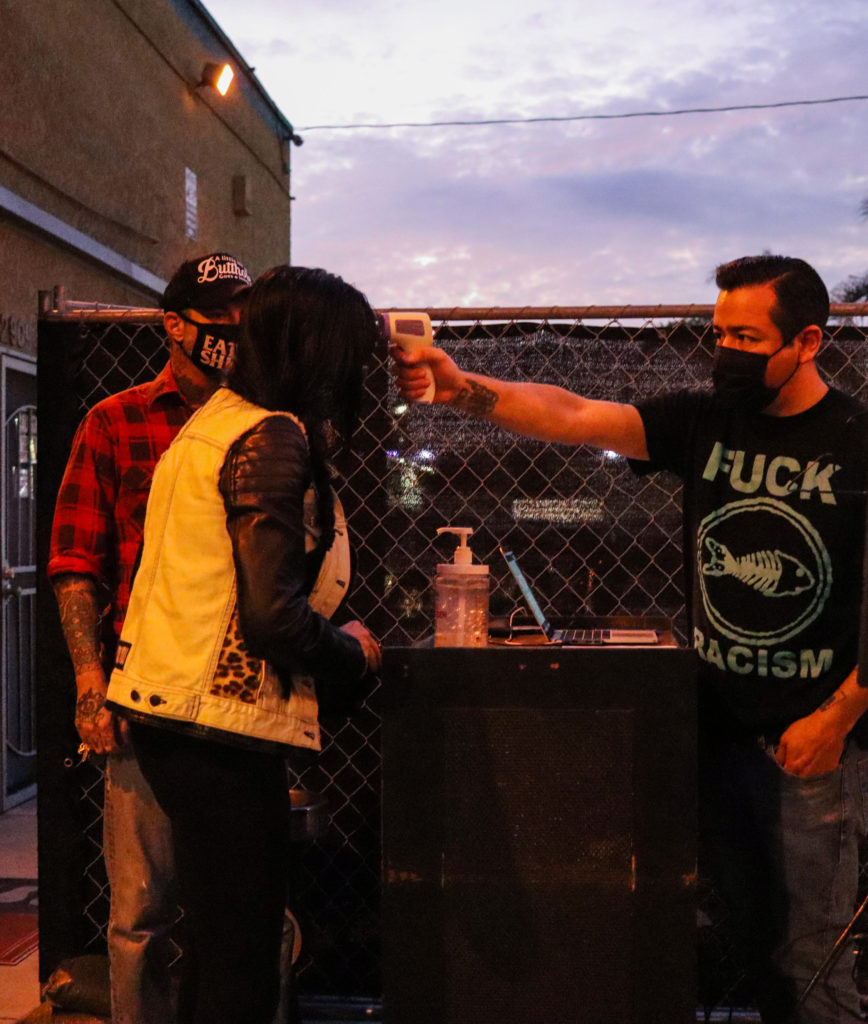 Guests’ temperatures are taken at the door and masks are strictly enforced. Photo by Cheantay Jensen. 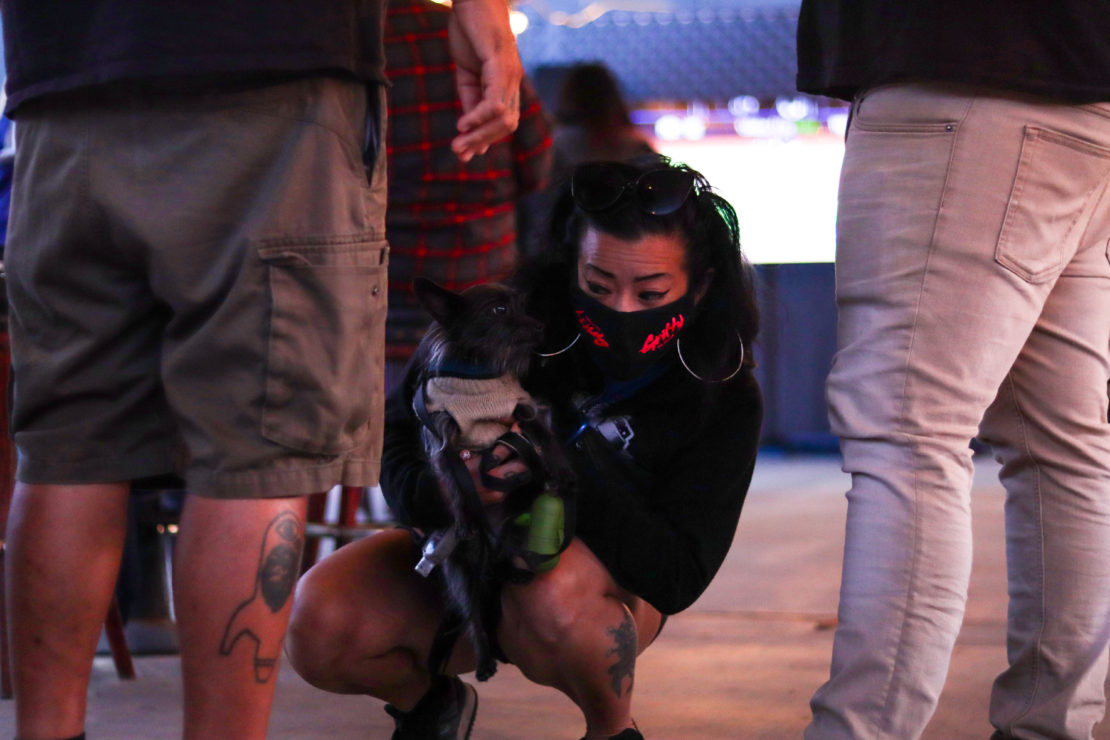 Local Linh Le and her dog Eddie arrived near dusk for the grand opening of Alex’s Bar Saturday Oct. 24, 2020. Photo by Cheantay Jensen. 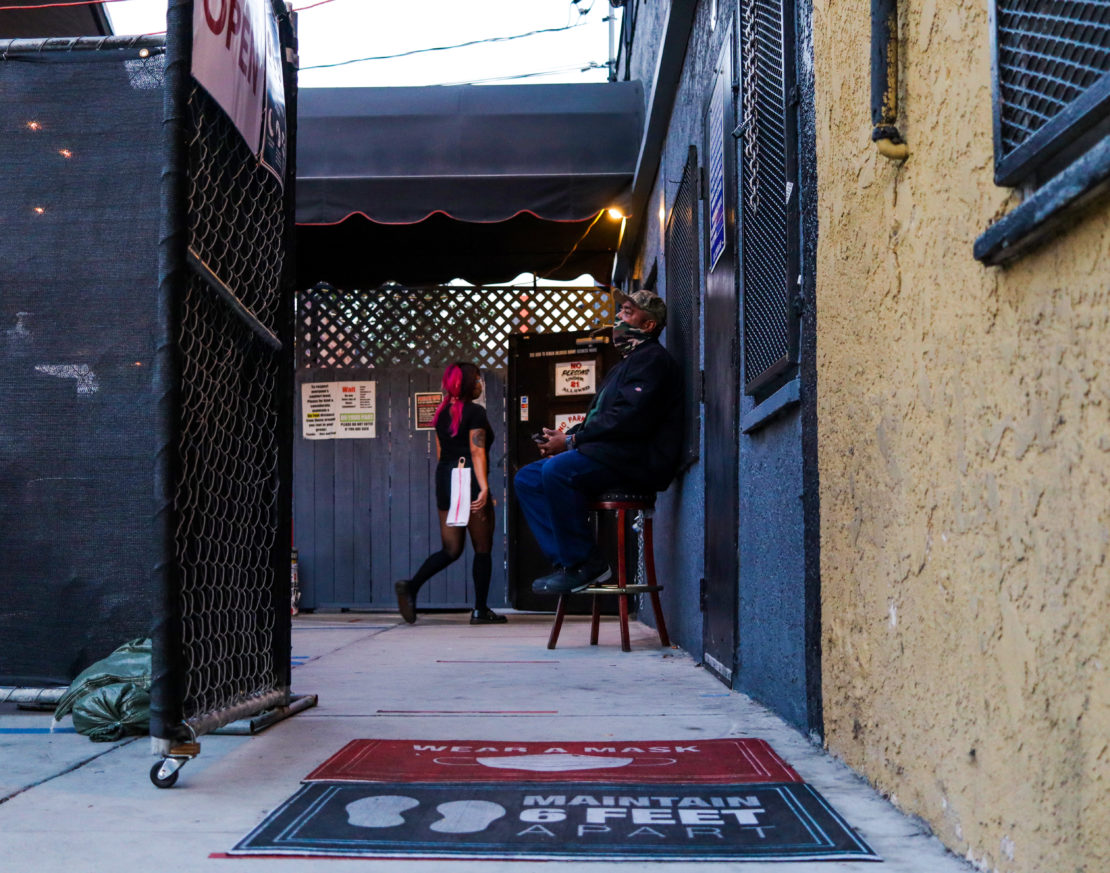 A long-time employee of Alex’s Bar, bouncer Mark Flowers, checks IDs and ensures that guests arrive with a mask on and have their temperatures taken. Photo by Cheantay Jensen. 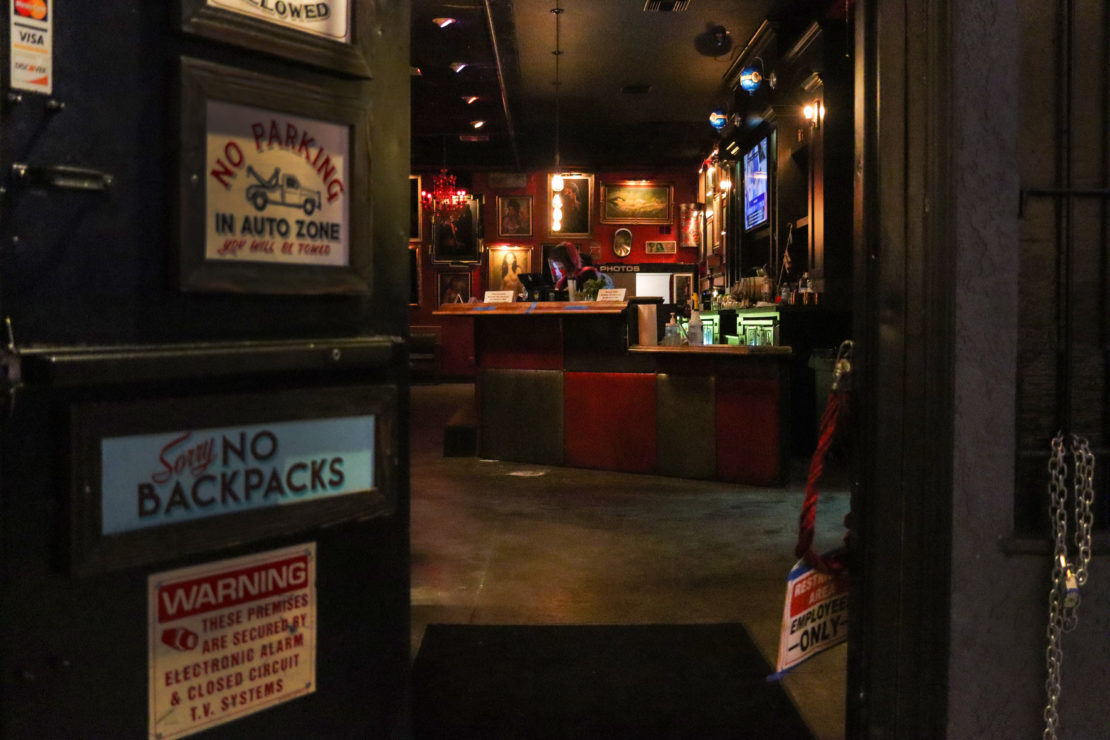 Operating table service only, Alex’s Bar staff prepare cocktails behind the bar and walk the drinks out to seated guests. Photo by Cheantay Jensen. 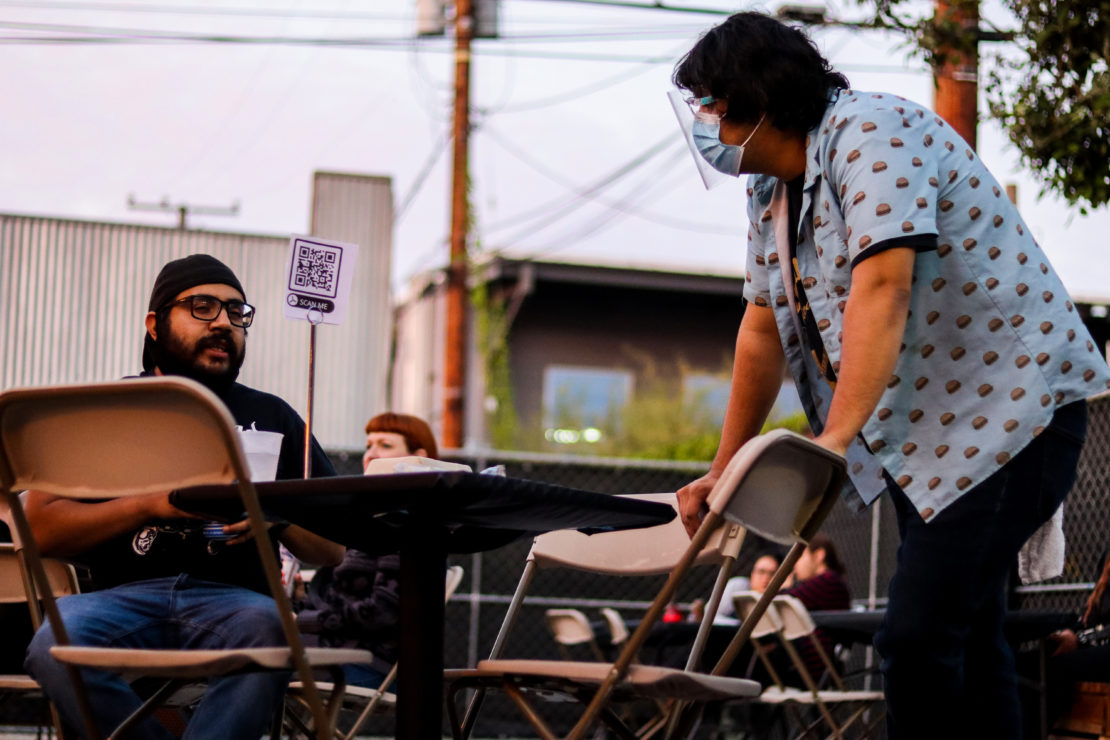 Bartender Mike Yager takes Henry Rivera’s order as Alex’s Bar is offering table service only. Rivera drove from his home in Compton to visit the bar’s reopening, and added that the bar is one of his favorite spots. “The people are great and give awesome service.” Photo by Cheantay Jensen. 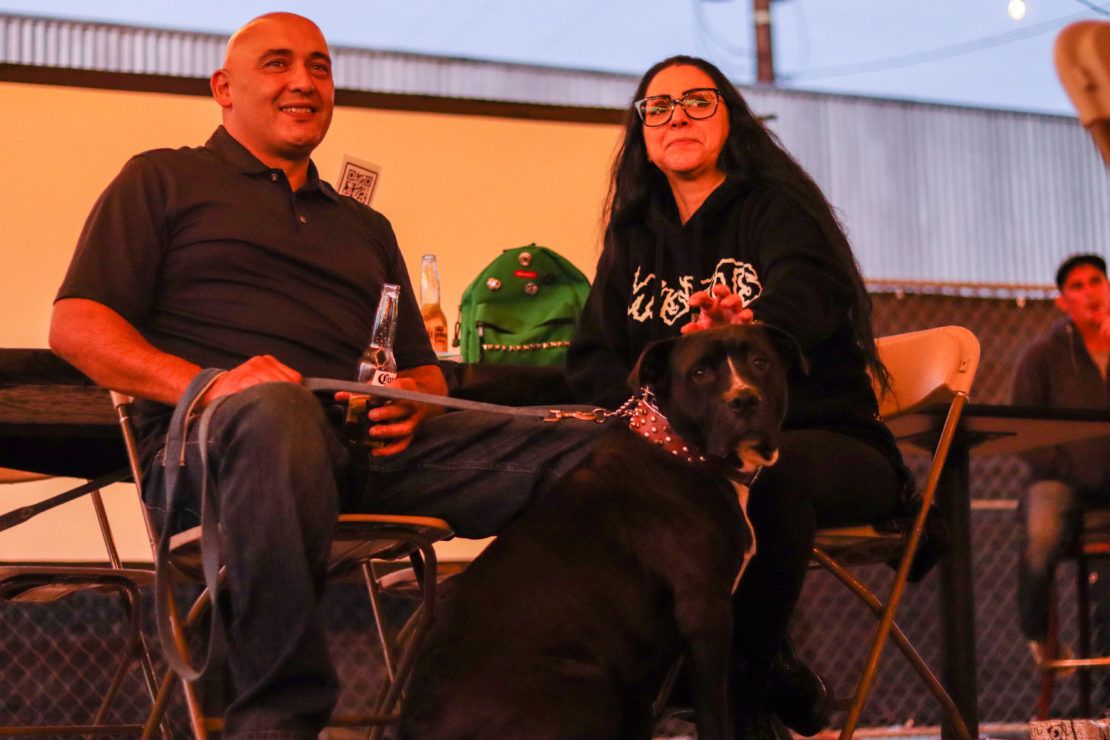 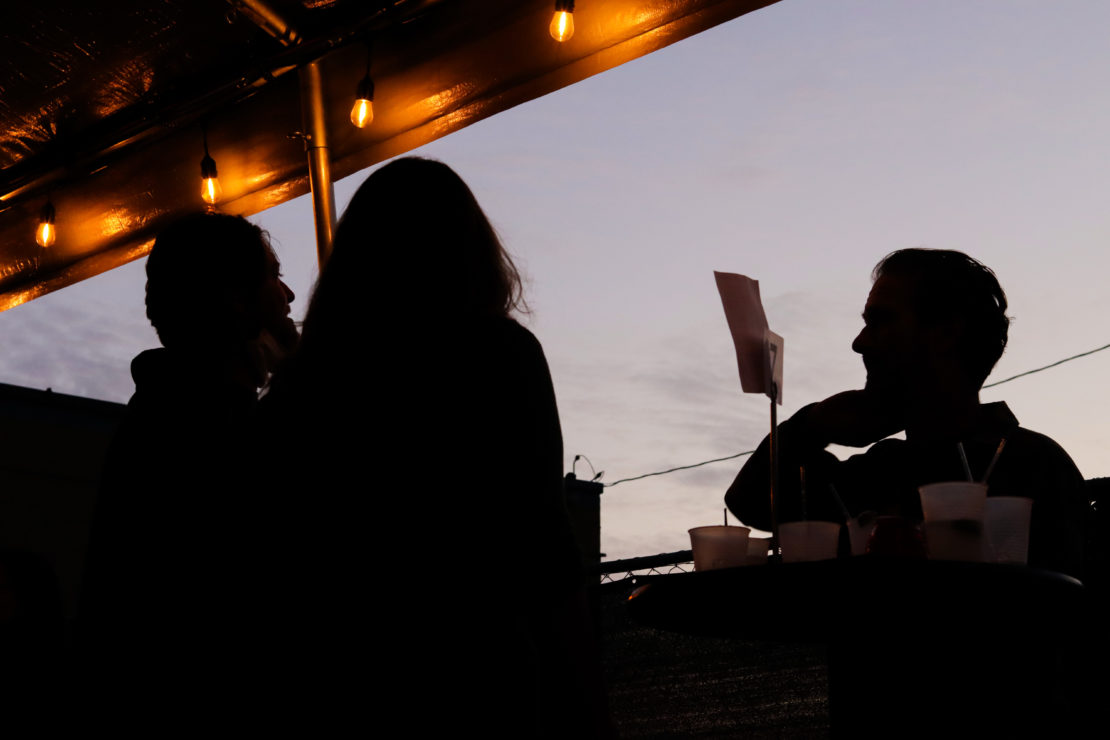 A party of three sits at a table bordering the bar’s new parklet during the grand reopening Saturday, Oct. 24. 2020. Photo by Cheantay Jensen.