In the Studio is a monthly multimedia series that highlights local artists and makers, in their element, doing what they do best. To contact us, email Visuals Editor Thomas R. Cordova at [email protected].

There are two things Justin LaRose can expect every morning when he steps—springs, more like it—into his workshop in North Long Beach.

First, the excited mews of a chunky, round black cat named Grizzly who, LaRose will tell you, is the true owner of the shop. And, second, that this is the cleanest his cement floor will look after the next nine—maybe 10—hours he’ll be holed up inside. Wood flakes—they just get everywhere.

Surrounded by all the tools he could possibly need—table saws, hand saws, lathes, sanders—LaRose makes his wood art out of old, broken skateboard decks.

“As a skater, you can totally tell how it was broken,” the 41-year-old said. “If you land too far forward or back, you’ll have breaks at the truck marks…If you had a real bad day, and you just start axing your board on the curb, there will be X marks on the side of the board. It all has a very real story.”

For LaRose, though, bad days are hard for him to come by. Which, he said, “is nuts,” because for most of his life, LaRose felt like he would never amount to anything.

The computer science major dropped out of college his freshman year at Western New England University in Springfield, Massachusetts. He said it was too expensive to go back, and so he resolved to live the rest of his days going from whatever job would give him a paycheck.

“I would just work to skate, and that was always my thing. I just really loved skateboarding,” the Marlborough, Massachusetts native said.

When he came to Long Beach in October 2003, LaRose’s first job was working as a barista at Portfolio Coffee, where he met his wife, Kristin. She was a customer at the time, then later his manager. They’ve been married for nearly 11 years.

He then did some retail work at Quicksilver. For a while he’d worked with a manufacturing company building trade show booths. Then, a coffee roasting gig. For fun, he’d refurbish antique furniture.

Though the paychecks always came through, LaRose described his jobs as dead end. Nothing ever invigorated or challenged him.

But when his mother died, LaRose sunk into a deep depression. He was so low, he said, that even skateboarding wasn’t bringing him the same unshakable joy it had always provided. After a nudge from his wife to find something, anything creative, to do, LaRose found himself in his garage, surrounded by old woodworking tools he had accrued from yard sales and decided to chop up an old skateboard he had lying around.

“I made a block out of it. And literally, that block was like gold to me,” he said.

He made a pendant for his wife, first. Then a coffee handle. But the cogs in his brain started to turn. What else could he make out of skateboard decks? Turns out, you can make almost anything. 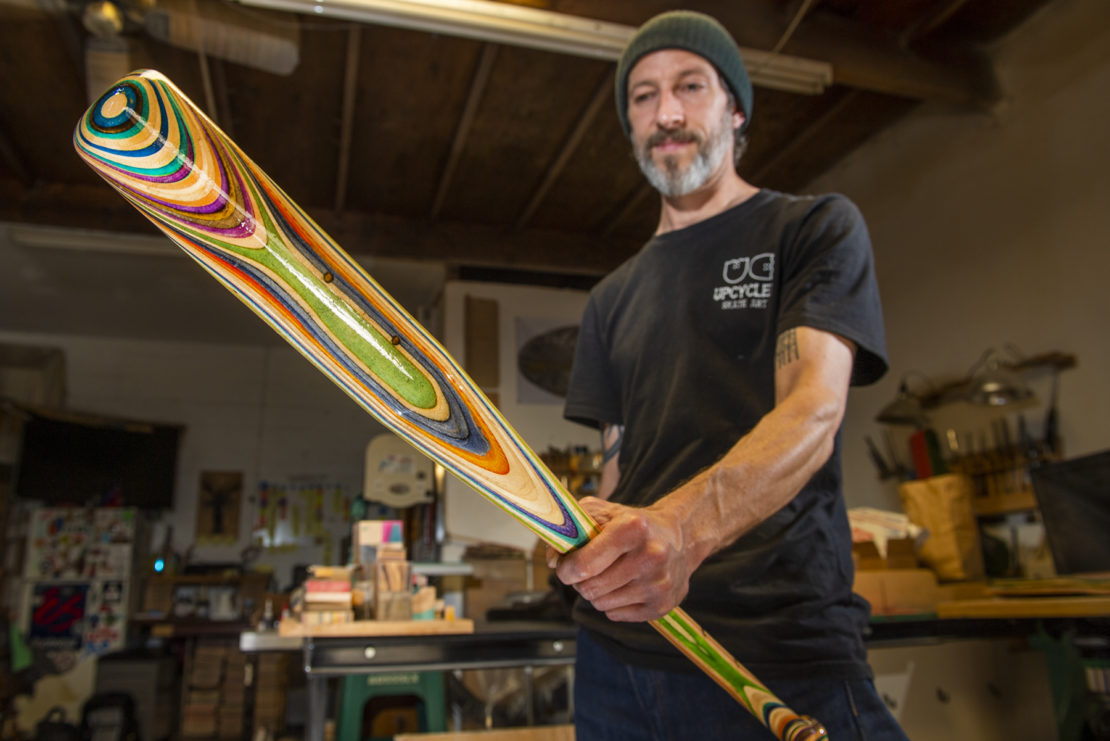 Justin LaRose holds up a bat that he made out of broken skateboards in his wood shop in Long Beach Monday, March 22, 2021. Photo by Thomas R. Cordova.

There’s almost nothing, LaRose said, he won’t consider trying to make out of used skateboard decks. Except for gun parts. Don’t ask, he said, not happening.

When LaRose felt like he was starting to get a handle on his crafting, he began posting his work on social media, namely Instagram. Seven years ago, this was pre-algorithm. His work started to catch some traction and he landed his first commission from South Korea—an espresso handle.

Then, ex-pro skater, Mikey Ray, commissioned LaRose for a small pocketknife. Ray shared the piece on his own channels which garnered LaRose more attention. It was then, he said, he knew he could make a career out of this.

Machine manufacturing company Grizzly (yes, that’s what his cat is named after) thought so too and offered LaRose all the tools he could need, which helped refine his art, putting it on another level entirely. 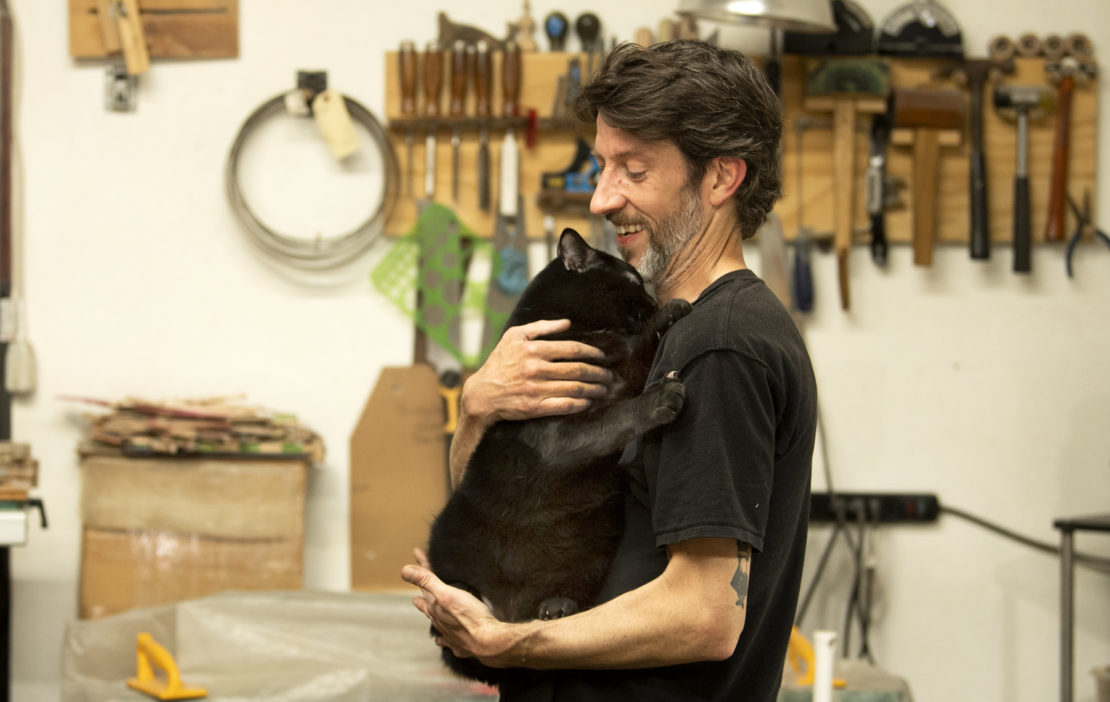 He got into the game at a good time, too. Though Japanese artist Haroshi is arguably the most renowned artist in this realm—his iconic middle finger statue made of skateboard decks outside of Huf headquarters was defaced into a fist last year during the anti-police brutality protests—LaRose said when he started seven years ago, no one else was really doing what he was. He found a niche in coffee and espresso wares, chefs’ tools, and practical, handheld objects.

It’s rare for people to find a career that ignites passion. Even rarer, still, that they find one that fuses all of their passions together. Skateboarding, woodworking, even his love for coffee, have all been blended into one beautiful craft through recycled skateboard art. And for LaRose, he said it’s kind of hard to get over.

“It’s literally like being at a skatepark every day, being able to play, explore my creativity,” he said. “I’ll never get tired of this. Legitimately, I feel like I’ve just cracked the iceberg.”