There’s a stretch of 10th Street in Rose Park, along the 2700 block between Ohio and Temple avenues where it feels like something’s missing. Perhaps you’ve driven along this urban swath once or twice. You hit a stretch of sporadically empty storefronts and you think something belongs here. But what? Well, maybe that’s just me. Every time I cruise along 10th I see this strip of buildings and I expect to see something filling in a space that makes me want to stop — but I’m always let down. Until now.

My head whipped around as I passed a brightly colored storefront that looks like amoebae floating aimlessly. Blues, pinks and yellows in blob forms against what was simply a white building weeks before. I excitedly stopped in my tracks, much too excitedly to those driving behind me I suspect, if the horns and hand gestures directed at me could be taken as an indicator, but I had to get look at what was going on here.

That exterior was way too cool to be another succulent plant store, or hair salon.  And then I noticed in the windows the signs that read: Coming Soon … another coffee shop! And above the door letters came into focus: Wood Coffee Co.  And I thought to myself, this is what belongs here! It’s perfect.

“We strive to create a space for all, but truly highlight a space for LGBTQIA+ and vegan individuals to feel at home,” owner Nolan Wood told me in an email. “We hope to be more than just a buzz word statement or idea, and [hope to] continuously evolve to bring the space to life in a way that holds up to our vision.”

Nolan Wood, 31, is no stranger to the world of addictive stimulants. “I spent the last 13 years in the world of corporate coffee. Starbucks… maybe you’ve heard of it,” he said. (And actually, yes I have heard of it. Home of 590-calorie coffee drinks, and pumpkin spiced diabetes — but I mean no disrespect. I’ve met many people who are so unfortunate as to reside in a coffee desert, for whom Starbucks is the only coffee they know, and their love for it is pure.) But this isn’t going to be anything like a Starbucks, Nolan’s vision for Wood Coffee Co. has been percolating for years. Ten years to be exact — although it wasn’t until five years ago that he actively began working to bring his vision to life.

A transplant from Fort Worth, Texas, Wood landed in Southern California five years ago, and settled in Long Beach in the beginning of 2021, as he started searching out the perfect place to foster those with a socially acceptable addiction, and become their savior.

“I was trying to be strategic with finding a location that didn’t have other coffee shops within a 10 minute walking distance, as well as something more neighborhood driven,” Wood said. “I only looked at a couple of other locations before I saw this one and it just immediately felt right.” And I couldn’t agree more.

Here’s a little note on coffee: How addictive is it exactly? Three cups. That’s all it’ll take. If you drink three cups consecutively over three mornings, you’re physically addicted. Ever have a morning that you didn’t get your coffee on time and you started feeling like you were maybe getting sick? A cold, a bug or something? Nope, that was addiction. Or rather, that was the beginning of withdrawal (which actually begins while you’re asleep). Ever thought that you’re not you without your coffee? You’re not wrong. Caffeine raises your IQ and intensifies your cognitive function enabling you to focus and problem solve (according to: Caffeinated by Murray Carpenter).  And if you’ve been drinking soft-drinks since you were a kid, then you haven’t been you without caffeine for quite some time.

In addition serving the greatest gift a plant ever offered the human race, extracted by various methods, and presented in a multitude of ways, Wood Coffee Co. will also be offering plant-based fare that will be serving items “in their most natural form. Whether it be from farm to table or farm to cup,” according to the website: woodcoffeeco.com. 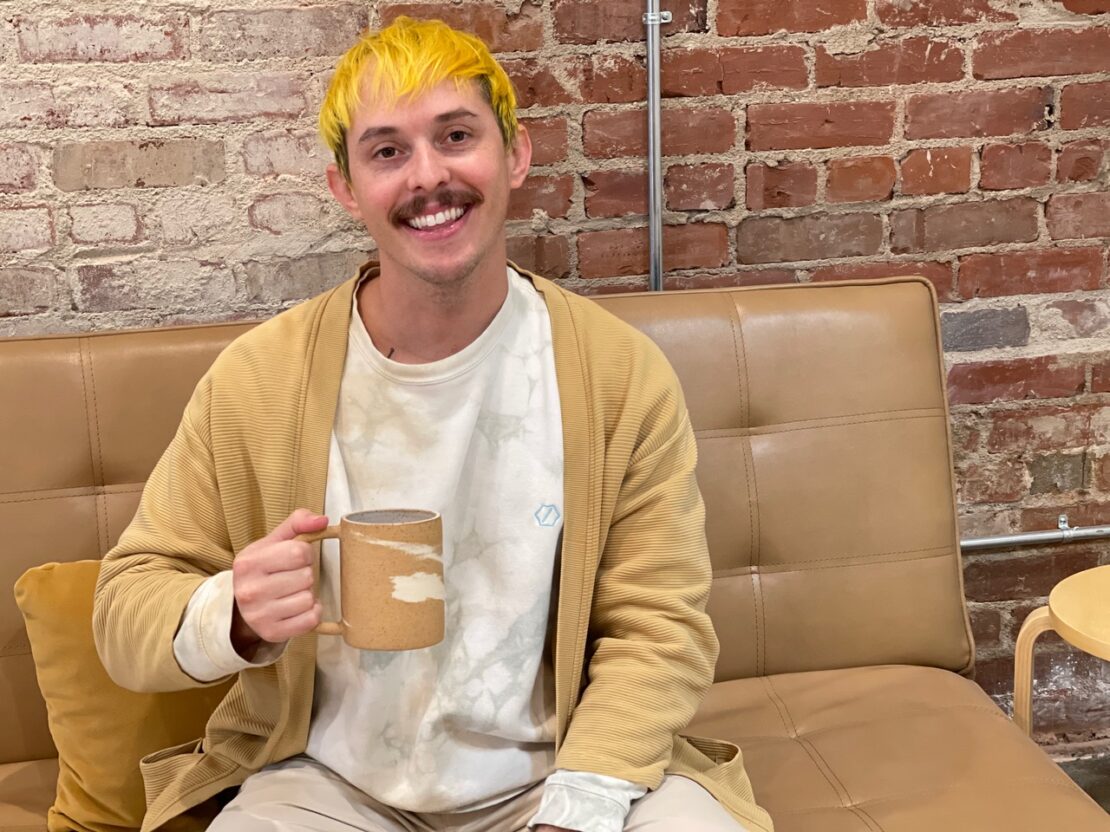 Nolan Wood enjoys one of his beverages at Wood Coffee Co., coming soon to Rose Park. Photo by Matt Miller.

While Wood Coffee Co. won’t be roasting their own beans, they will be sourcing from Equator Coffee, a Northern California LGBTQ+ owned company, and will offer “an all vegan selection of pastries provided by The Good Good LA (a woman-owned all vegan bakery in Los Angeles),” according to the website. And they plan to work with other local vegan businesses down the line to offer a variety of food options. The website also reads: “We are here to support and uplift marginalized communities through networking and collaboration (and coffee, duh). Our goal is to provide a space for all, while prioritizing a haven for the LGBTQ+ community.” Wood Coffee Co. is slated to open in mid December. Follow on Instagram: @woodcoffeeco for updates.