A group of Filipino organizations and allies will host a virtual parol lighting ceremony, Saturday, Dec. 12, in honor of this week’s International Human Rights Day, to highlight the ongoing violence in the Philippines and to help fundraise for the hundreds of thousands devastated by typhoons this year.

“Pailaw: Parol Parade for Human Rights,” takes place via Zoom from 5 to 6:30 p.m. and will include an online activity for attendees, a performance from a member of Anakabayan, a Long Beach youth organization, as well as prayers for the many lives lost to violence and natural disaster, this year.

The typhoons that hit the Philippines in November killed dozens of people and caused nearly a million people to be evacuated. 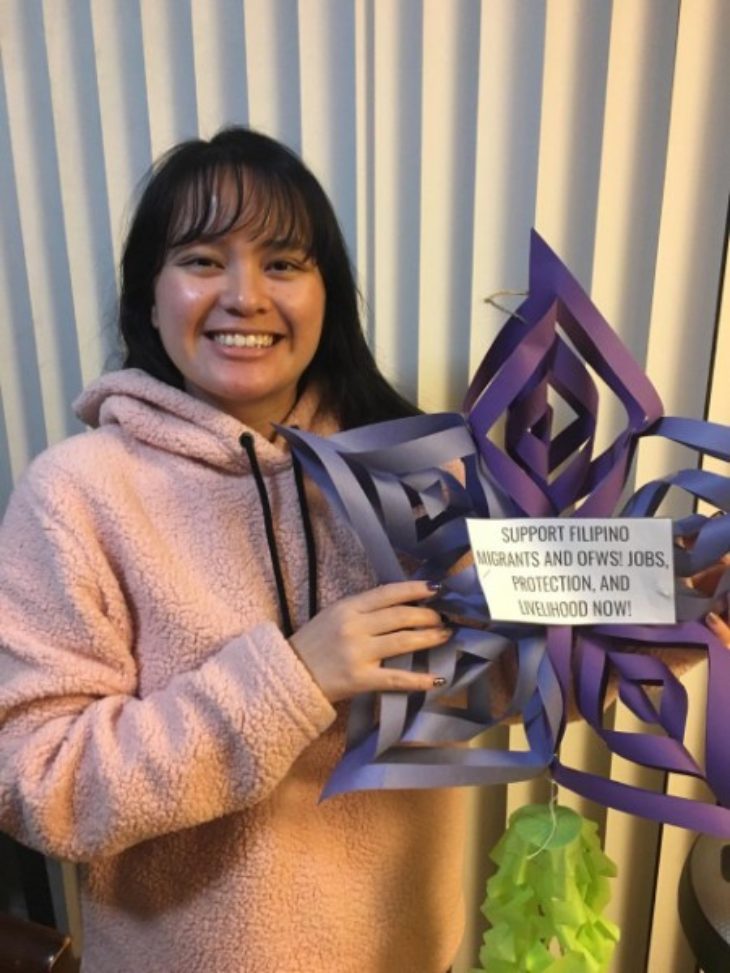 Janelle Rivera, member of the Malaya Movement, holds a parol made out o paper. Photo courtesy of Jennifer Benitez.

Before the natural disasters, local organizers and Cal State Long Beach students urged Congressman Alan Lowenthal to further campaign for the Philippine Human Rights Act, a bill he endorsed that would suspend security assistance to the Philippines until its government, under President Rodrigo Duterte, reforms its military and police forces. Many activists say Duterte’s government promotes and commits numerous violent, human rights violations, including the brutal arrest of two Long Beach journalists.

Parols, star-shaped lanterns, are commonly lit by the Filipino community around Christmas time as way to “show the triumph of light over darkness,” said Jennifer Benitez from Philippines-U.S. Solidarity Organization (PUSO) of SoCal, an organization helping to put the virtual event together.

These lanterns are traditionally made with bamboo sticks, strings and tissue paper. The star, which can vary in textures and colors, sometimes has two tails on the bottom to make it look like a shooting star as it hangs outside.

This past week, the Malaya Movement, a Filipino political group, hosted a parol making workshop, while the Filipino Youth in Action group will be selling holiday cards as well as receiving direct monetary donations intended to help with typhoon disaster relief.

Despite the updated stay-at-home orders, organizers seek to bring together hundreds of people to engage attendees “under the banner of human rights,” they said.