Long Beach rapper Donnie Waters chose music as a path away from poverty, gangs and trauma • the Hi-lo
- ADVERTISEMENT -

By day, 27-year-old Edwin Armenta works at an Amazon warehouse to earn an income to support his 2-year-old daughter. By night, Donnie Waters, his alter ego, spits bars with his lead producer and a few friends at a humble studio in the Wilmington neighborhood, just west of Long Beach.

He’s an emotional man, growing up in a household that didn’t let him express his feelings of hurt and trauma surrounded by gang violence, becoming numb to the sound of gunshots outside his homes, whether growing up in the Washington neighborhood at 15th Street and Cedar Avenue or his current block on 56th Street in North Long Beach. Music serves as his therapy, allowing him to vent his soul onto a mic.

Donnie Waters, as he prefers to be called, was born and raised as a Mexican American in Long Beach, and aside from the obvious get-that-bag goal, his greatest intentions with his music are to inspire and, in a way, console other people with unavoidable traumas that come from poverty, “race wars,” death or myriad obstacles inherent in immigrant life. 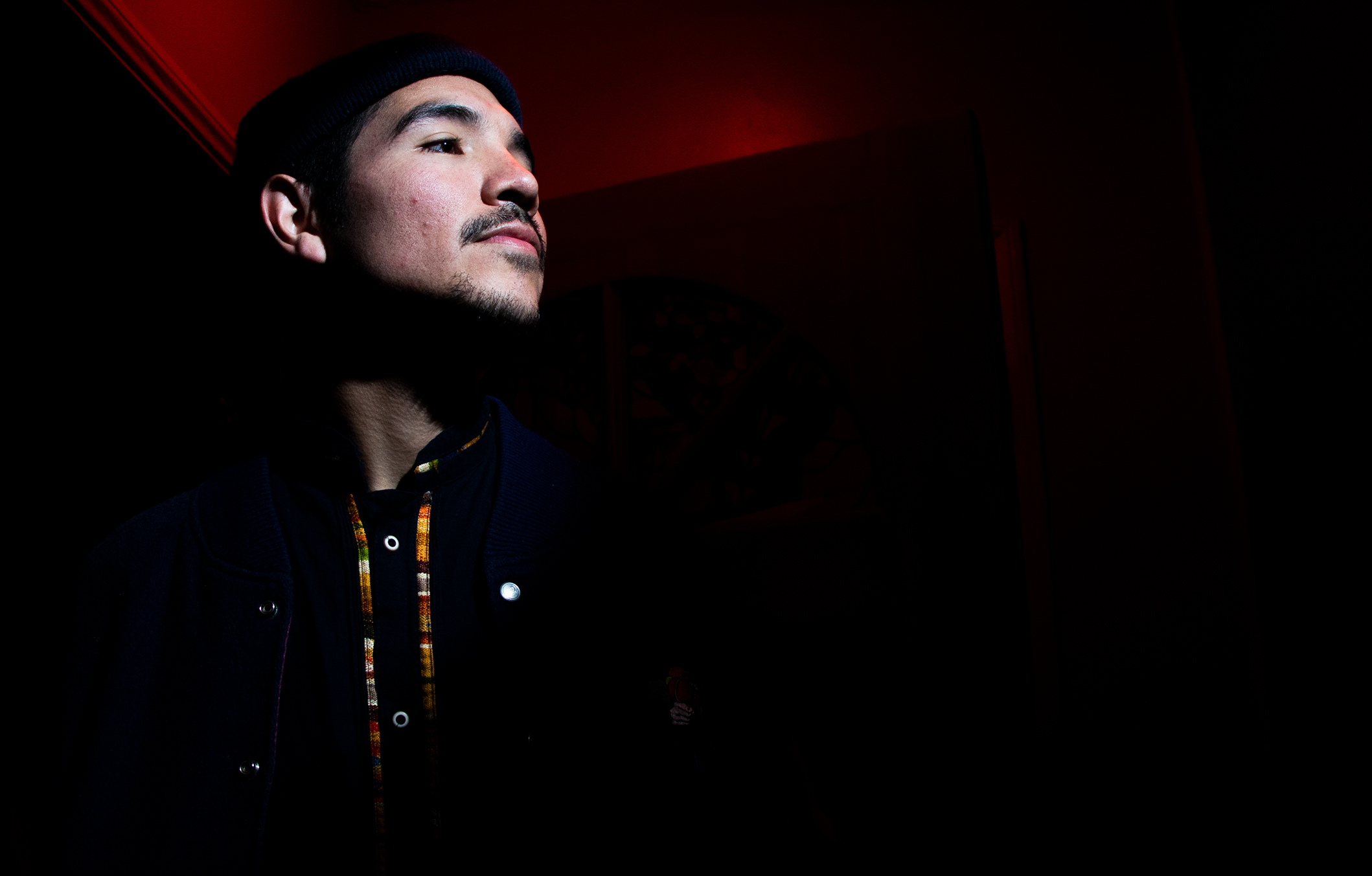 Donnie Waters stands for a portrait inside his North Long Beach home on Oct. 28, 2020. Photo by Crystal Niebla.

His stage name came from the marriage of two people, one fictional, the other a renowned musician, who encapsulate Waters’ persona. During a period of depression, he’d rewatch the 2001 film Donnie Darko, which tells the story of a teenage boy who has either time-traveled to a parallel universe, is suffering from mental illness or is fated to prevent a world of carnage. The last name comes from his admiration for blues icon Muddy Waters.

He translated his admiration for Muddy Waters, who, like him, expressed his emotions through music, when he dropped a new album last month titled “Kunga,” crafting the sound of a dreamy nightmare in collaboration with his producers. The 12-track album distinguishes itself by short songs—they average 2 minutes and 18 seconds—utilizing wonky piano and guitar sounds behind trap beats. Waters’ lyrics, some in Spanish, pay homage to themes around resilience, overcoming obstacles, strong women and cultural identity.

“I was like, man, OK, let’s make something to distinguish myself. I just can’t be out here sounding like all these other rappers,” he said. “Especially with that Latin vibe. I really wanted to make that sound come to life.”

As an infant, “Kunga” was the first word he said, repeating it so often that it became a nickname that his family still calls him by. Waters chose the name for his album to help him “self-reflect in order to rediscover who I am.”

His rap career began slowly when, as a teen at Jordan High School, he wrote poetry and recorded three songs in his Mom’s and friend’s garages. After graduating, he studied at Long Beach City College and transferred to Cal State Long Beach, double majoring in English literature and creative writing.

“If I didn’t pursue the music, I would have gotten distracted,” he said, his voice dropping as he reflected on an environment of drugs and gangs. Instead, he frequented Houghton Park, doing kickflips on his skateboard.

One of his songs, “Dip Down,” talks about humility, having come from helping his Mom sell flowers on the streets in third grade to sometimes getting Salvation Army clothes and lining up for free food. “There was moments when we were drinking powdered milk that we got from the churches,” he said.

Being the second youngest of six siblings, his older brothers became his role models but he felt “conflicted” as one of them, a gang member, showed him to do-as-I-say-not-as-I-do.

“He kind of set the bar for us,” he said, recalling the envy he felt about the money made by his oldest brother, who died at age 37. Waters declined to share the cause of this death.

“Just being in the hood is a traumatic experience,” he said, tapping his feet. “It’s like real life being implemented on you so fast and so young.”

He writes his music to help others navigate and process their feelings, he said, because “there’s no smooth road, really.” 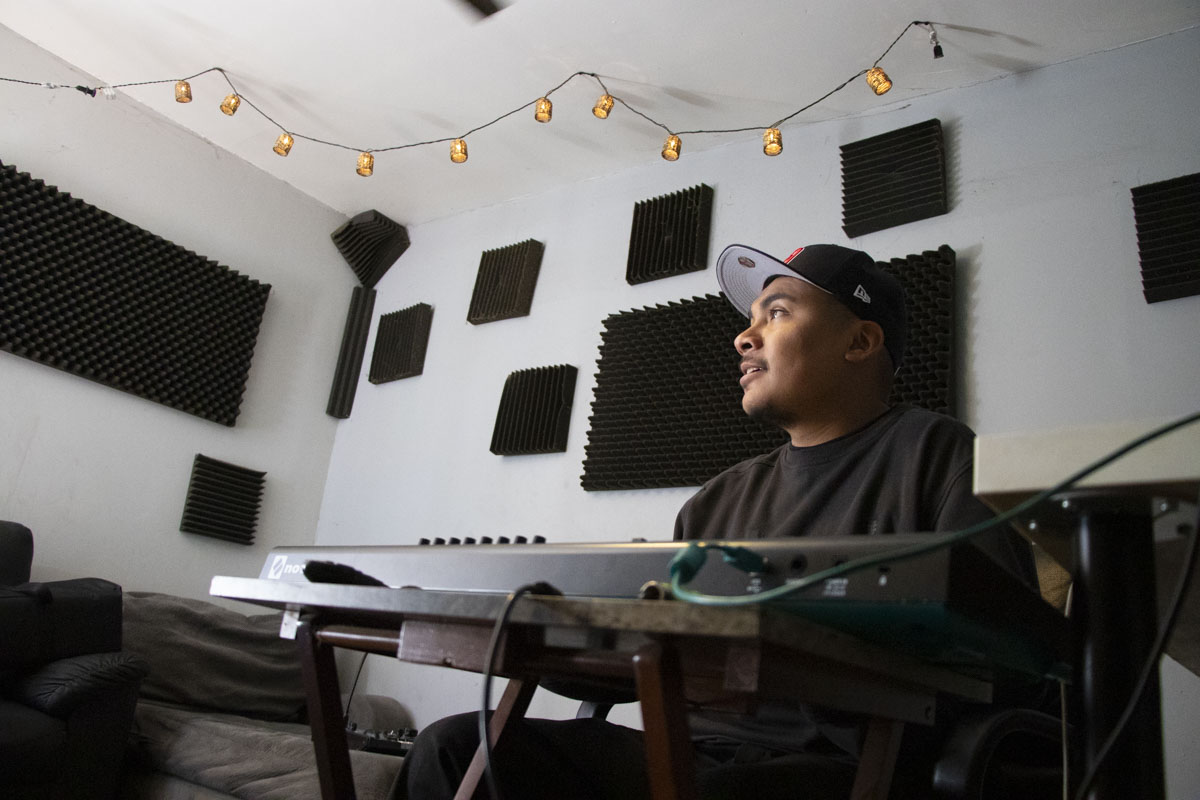 Once in college and taking writing classes, he said he felt timid to express himself because some classmates made him feel his vocabulary wasn’t up to par. But, after a short story writing assignment, a professor asked him if he wrote music? The professor, he said, was “down to earth,” which allowed him to connect and easily take feedback when she encouraged and pushed him to feel more comfortable with his own writing style that included a generous use of slang.

Having made connections with people of different races, one of Waters’ other intentions also includes bridging cultures together, whether that’s adding Spanish verses to trap beats, or pushing messages of Black and Brown unity in music videos.

“It’s important to show that we’re all in the same struggle in the same situation,” said videographer Anthony Delgado, who goes by 2Raw and directs and films the vision behind some of Waters’ music videos. 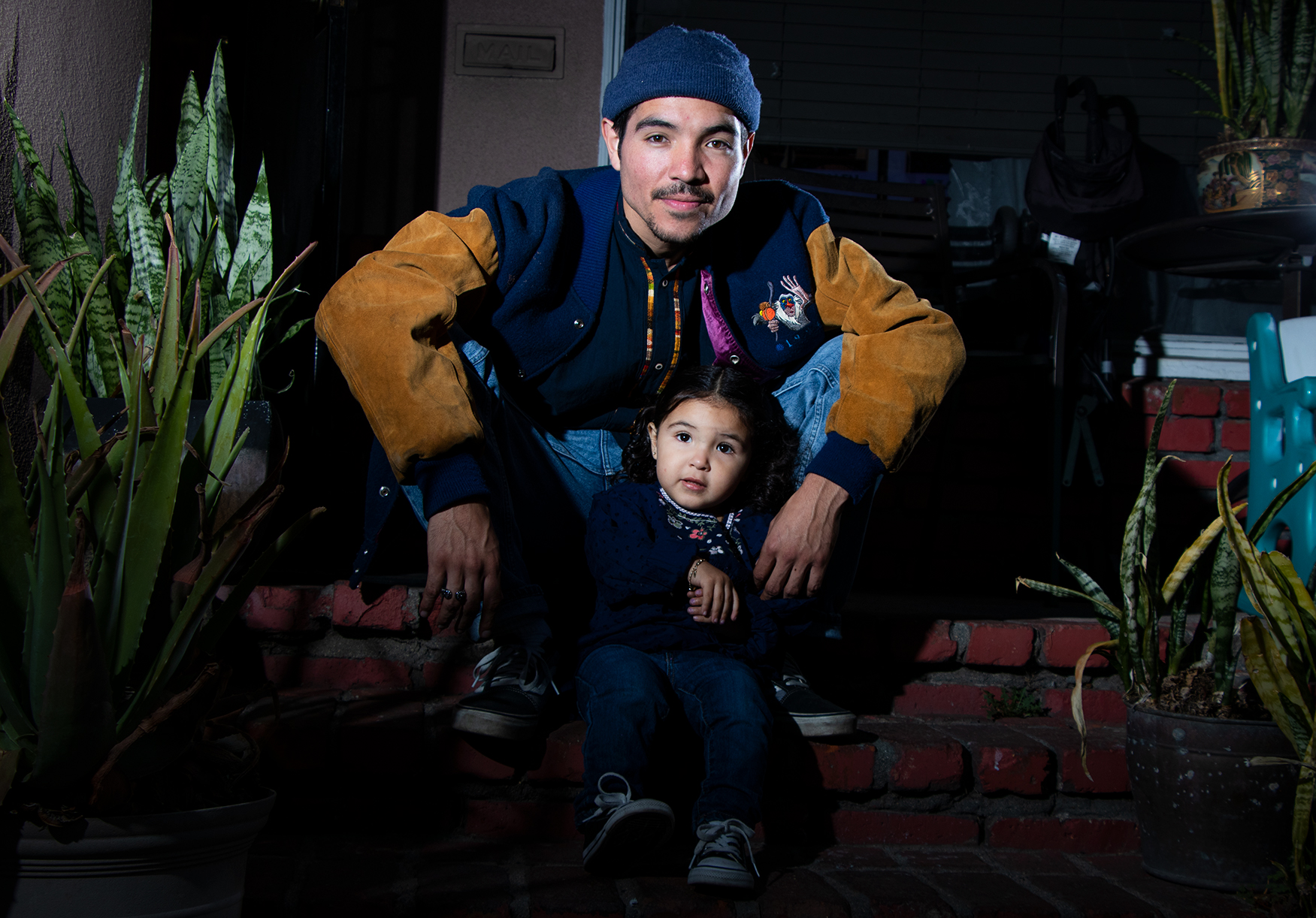 Donnie Waters sits for a portrait on the front steps his home with his daughter, Nahla, in North Long Beach on Oct. 28, 2020. Photo by Crystal Niebla.

Like Waters, his album’s lead producer, Anthony Baldonado, known as Antdawg, grew up in an immigrant family surrounded by gang life, surviving drive-bys during part of his childhood on Walnut Avenue and 15th Street. Having worked with him for only two years, Antdawg said he sees Waters as a big brother for his “leadership kind of personality.”

“Honestly, I wanna take it as far as I can,” Waters said, lightly chuckling.

Being a man with different sides to his personality, Waters coined different names, such as his government, family and artist names. But two years ago, he received another one: Papa.

After his daughter Nahla was born, he said she became another blessing motivating him to take things to the next level in his rap career.

“I feel like this is real love,” he said, with a glowing smile. “It’s almost scary.” 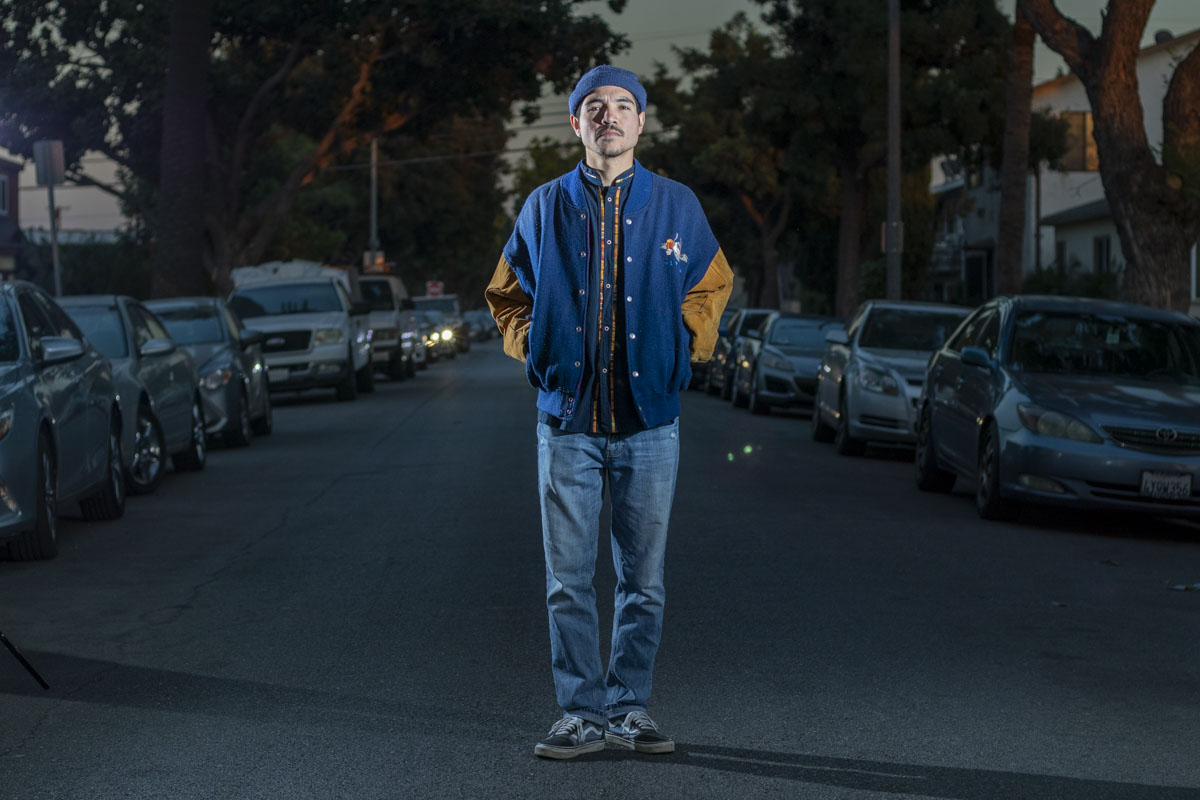 Donnie Waters stands in the middle of 56th Street for a portrait on Oct. 28, 2020. Photo by Crystal Niebla.