Will Long Beach's Subodh Garg find 'Love on the Spectrum'? The uplifting show lets us see his journey • the Hi-lo
- ADVERTISEMENT -

But unlike most men venturing into the perilous world of dating, Garg isn’t doing it alone. He’s got a whole production team filming his journey as a star on the new reality series “Love on the Spectrum U.S.” because Garg is also autistic.

The new series, which arrived on Netflix May 18, is an American spinoff of the very popular Australian show of the same name. Each season follows multiple subjects on the autism spectrum as they venture into the world of dating, many for the very first time.

Compared to shows like “The Bachelor” where connections are rushed and the dates are highly orchestrated, “Love on the Spectrum” is the antithesis. The dates aren’t edited to minimize the awkward silences or disguise stumbles in social scripts, like deciding who pays for a meal. Its cast members, who by way of their neurological differences, approach the idea of love and relationships from the purest of stances: They’re looking to find connection, share common interests and be understood.

For those reasons, “Love on the Spectrum” is a show any viewer—neurodivergent or not—could relate to. This season though, locals may delight in knowing Long Beach plays a part in a big way.

By episode two of the six-part series, we learn that Garg lives in Los Angeles with his sister, though much of his screen time on the show takes place at his family’s home in Long Beach. Locals may also recognize the waterfront backdrop at The Crab Pot in the marina, where he has his first date. 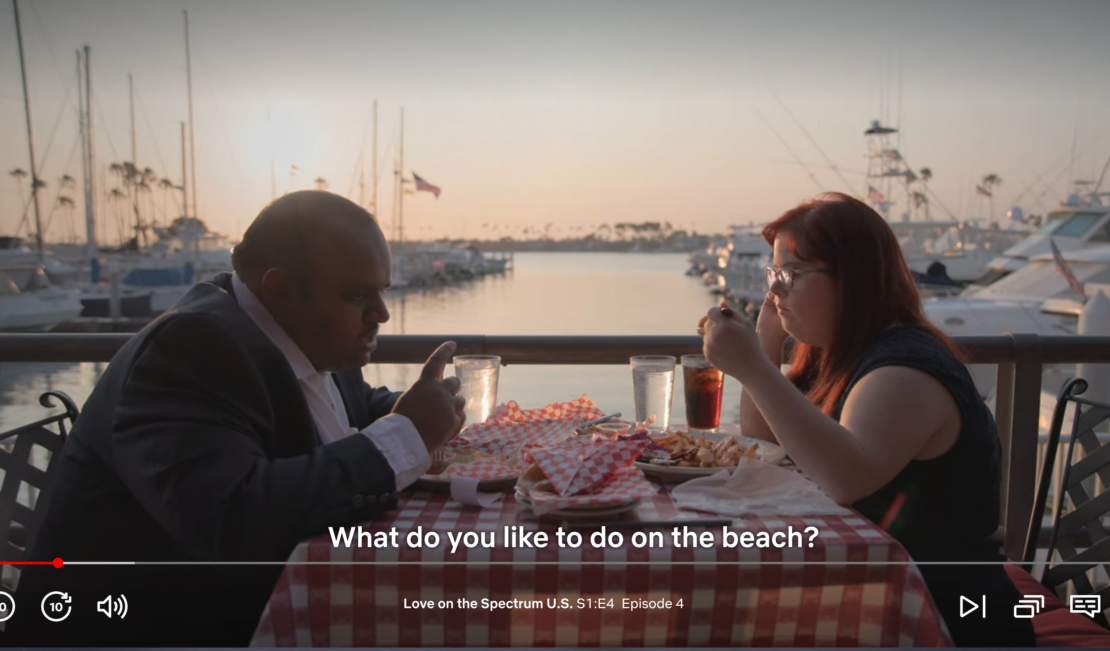 A screenshot of Subodh Garg and his date Rachel at The Crab Pot restaurant in the new Netflix dating show “Love on the Spectrum U.S.”

Garg’s unique journey on the show is that he’s never dated, unlike most of the cast who have either been on dates or been in a committed relationship. His doting mother, Anju, we learn has struggled to help her son in that department since she and her husband had an arranged marriage.

“We come from a different culture, dating is not something I grew up with, so I have no idea how to help him,” she says. “I’ll feel relieved if he finds love. I’ll feel like I’ve fulfilled my duties as a mother.”

One major critique of the Australian original was that its cast lacked any racial or ethnic diversity. This season, though, we see a major improvement with Garg, who is Southeast Asian, and Dani, who is Latina, White and Asian. There’s also Steve, the oldest person the show has featured, at 63. For this, the show feels more inclusive and interesting, and it hits its message of proving to the world just how unique—and loveable—the neurodivergent community is.

What “Love on the Spectrum” has always excelled at is showing the world that people on the spectrum live successful lives. Not just in the sense of having an amazing career, but by acknowledging their growth, highlighting their support systems, and celebrating their unique personalities and passions. Garg, for instance, has an amazing gift for numbers and can recite which day of the week any date fell on. But he’s also kind-hearted and eager to please, as we see when autism expert Jennifer Cook visits Garg to give him a prepper on how to approach a date.

While watching the dates play out, there’s a good chance you as a viewer might have a sort of awakening experience where you realize the nuanced (and exhausting) social strategy that goes into dating, such as making sure the conversation is a 50/50 experience or trying not to cut someone off while they’re talking. It’s amazing seeing them succeed in those moments. But when they falter, we also see the couples react with refreshing respect and understanding—something most of us could likely do with a little more of.

If you’re not yet sold on “Love on the Spectrum” consider that there are few shows out there that give such a warm, uplifting and honest portrayal to the five million-plus people in our population on the autism spectrum whose wants and desires mirror our own. And maybe, it just might remind you of the beauty and bravery of being your authentic self, the person you are when no one is watching.