Side strEATS is a monthly multimedia series by Long Beach Post staff that aims to highlight unique food businesses across the city. To contact us, email Visuals Editor Thomas R. Cordova at [email protected].

It’s nearly 7:30 a.m. on a cloudy Sunday morning and Matt Stevanus is in a bit of a panic. As the tall, lanky business owner scrambles to ready his burrito pop-up, he calls out directions to his staff. He’s still waiting on half of his equipment to arrive, most notably a couple of propane flattop griddles, and by now a few customers have already started a queue.

By 8 a.m. the line starting in front of Lord Windsor Coffee trails down Third Street and Stevanus addresses the crowd, apologizing for what’s looking to be a 20-minute delay.

“If you all don’t know what is going on, I was screwed out of my equipment this morning. So, this is all borrowed, slash, they don’t know I borrowed it,” Stevanus jokes, pointing to the sizzling griddles billowing plumes of fragrant smoke behind him.

The crowd chuckles in response, but no one steps out of line. They know that breakfast from Lowkey Burritos is well worth the wait.

“It’s just so good,” said Adrienne Soto, who drove down from Torrance for the pop-up. “We’ve had other burritos and they’re just a waste of time—this has just set the bar so high.”

Indeed, it appears that 27-year-old Stevanus has seemingly cracked the code of crafting the ultimate breakfast burrito, catering to sold out pop-ups in Los Angeles, Long Beach, Torrance and Santa Ana on any given day. In just three years, Lowkey Burritos has gained a cult-like following—over 50,000 on Instagram alone—smitten by the business’ signature stuffed burritos rolled in a crispy, cheesy crust.

Loaded with scrambled egg, crispy potatoes, cheese and homemade salsa, each entry-level burrito begins at $7 but can go as high as $15 with add-ons such as bacon, veggies (a medley of onion and bell peppers), avocado and, of course, the cheese crust. 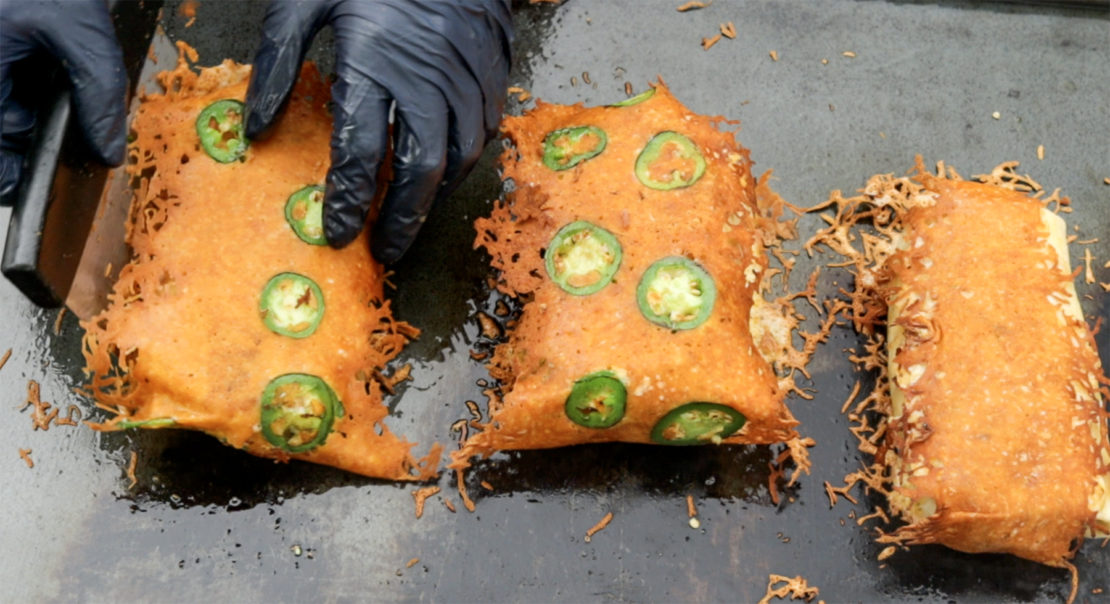 The signature grilled cheese-wrapped burrito, with jalapenos, that Lowkey Burritos, is know for at a pop-up in Long Beach Sunday, February 7, 2021. Screen Grab by Cheantay Jensen.

“I use the cheese more for texture versus flavor,” Stevanus said, noting that he originally came across the idea from a friend. “When I’m eating a burrito, I like a bag of chips or something with it, you know, to kind of offset the mush.”

To keep things interesting, for himself and his customers, Stevanus frequently offers various new specials and add-ons, sometimes based on what sounds good to him that day or what’s available.

“A big one people ask for and rave over is tri-tip. But it’s really hard to get a hold of,” Stevanus said. “And I don’t bring it out every weekend otherwise it wouldn’t be a special.”

Stevanus’ entry into the hustle of slinging street breakfast burritos began in August 2018. While expecting his second child, the young line cook left his job working in the kitchen at South Bay burrito spot Phanny’s, the breakfast joint in Torrance that boasts itself as the “home of the breakfast burrito.”

“I got that feeling of like, what am I doing with my life?” he said. “[I thought] if they can sell hot dogs in LA, then what’s the difference? It’s a breakfast burrito. I just took a grill out to LA and gave it a shot.”

Roaming around Downtown Los Angeles in his small hatchback, crammed tight with all the equipment and fixings of a one-man operation, Stevanus began cooking in parking lots and side streets around Downtown. First in Santee Alley, also known as LA’s Fashion District, then in a parking lot near Staples Center. On a good day, he would serve up 70 burritos by himself in a few hours. 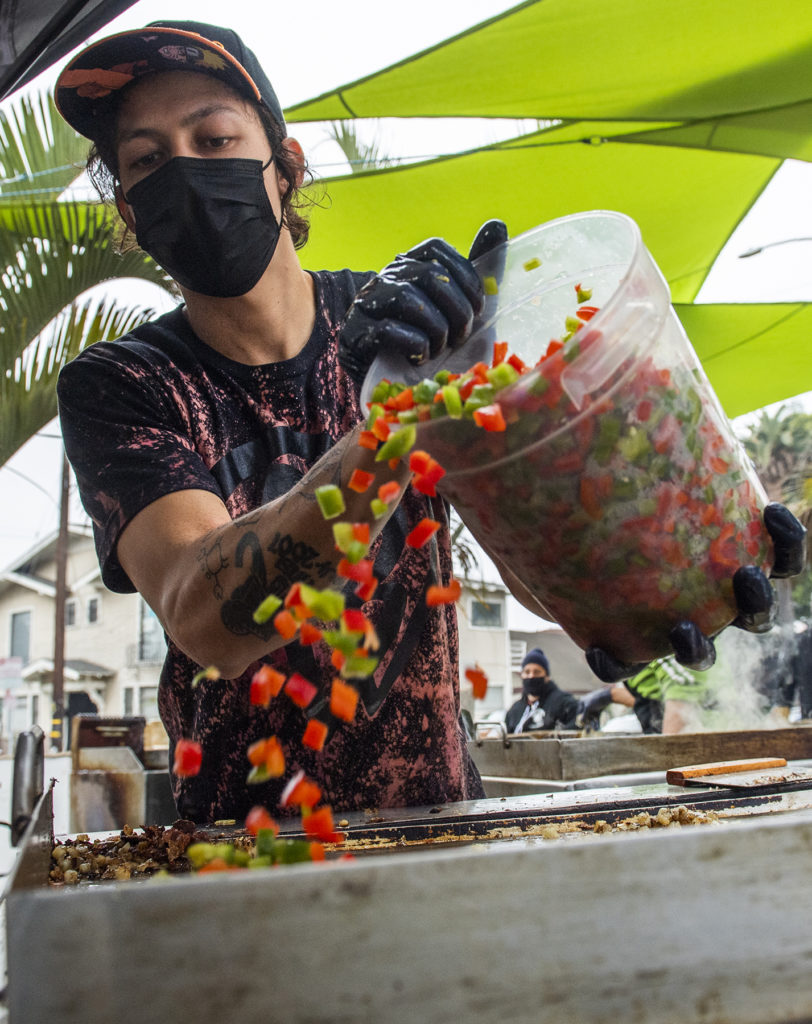 Matt Stevanus, owner of Lowkey Burrito, pours out some vegetables onto his grill as he makes breakfast burritos during a pop-up in Long Beach Sunday, Feb. 7, 2021. Stevanus bring his pop-up from Los Angeles to Long Beach every Sunday. Photo by Thomas R. Cordova.

As word got around, his following snowballed. He expanded his operation, hiring about three or four regular employees and invested in a few more grills. On Sunday, Feb. 7 he and his team churned out 262 burritos in four hours.

Like most businesses, Lowkey did take a hit when the pandemic struck last year. He had to cut back his staff and lower volume down to 100 burritos or less. And, for a while, Lowkey relegated its business to bike courier delivery.

“In the beginning, it was a little rough,” Stevanus admitted.

But if Sunday’s pop-up is any indication—Stevanus had hired eight staff and utilized four grills for the event—it seems Lowkey Burritos prospects are looking upward. In Korea Town, Lowkey Burritos is working toward its first physical storefront, operating as a sort of cloud kitchen, Stevanus said. During daylight hours, Lowkey Burritos will share space with with an as-yet-unnamed coffee shop with one or two other pop-ups occupying the kitchen at night. Stevanus said opening plans are still tentative, but should solidify in the next few months.

Until then, you can find Lowkey Burritos outside of Lord Windsor Coffee on Sunday’s from 8 a.m. to 12 p.m. You can also keep up with Lowkey’s scheduling and locations by following them on Instagram.