Lynne Cox wrote the book on swimming; her latest is about daring water-rescue dogs • the Hi-lo
- ADVERTISEMENT -

When Long Beach-based author Lynne Cox saw a video of massive, shaggy dogs leaping out of helicopters into the waters of Northern Italy, she had some questions.

Cox, an accomplished open-water swimmer herself—known for braving the Bering Strait and English Channel (twice)—needed answers about how and why these Newfoundlands were jumping from the air to perform highly specialized water rescues.

“I just thought, I really want to go there and find out more about them, and find out how they train and if the dogs are treated well or if they’re forced to participate,” said Cox, a lifelong dog lover.

So, she went to Italy for a trip that, years later, would become the basis for her seventh and newest book, “Tales of Al: The Water Rescue Dog,” which was released today. 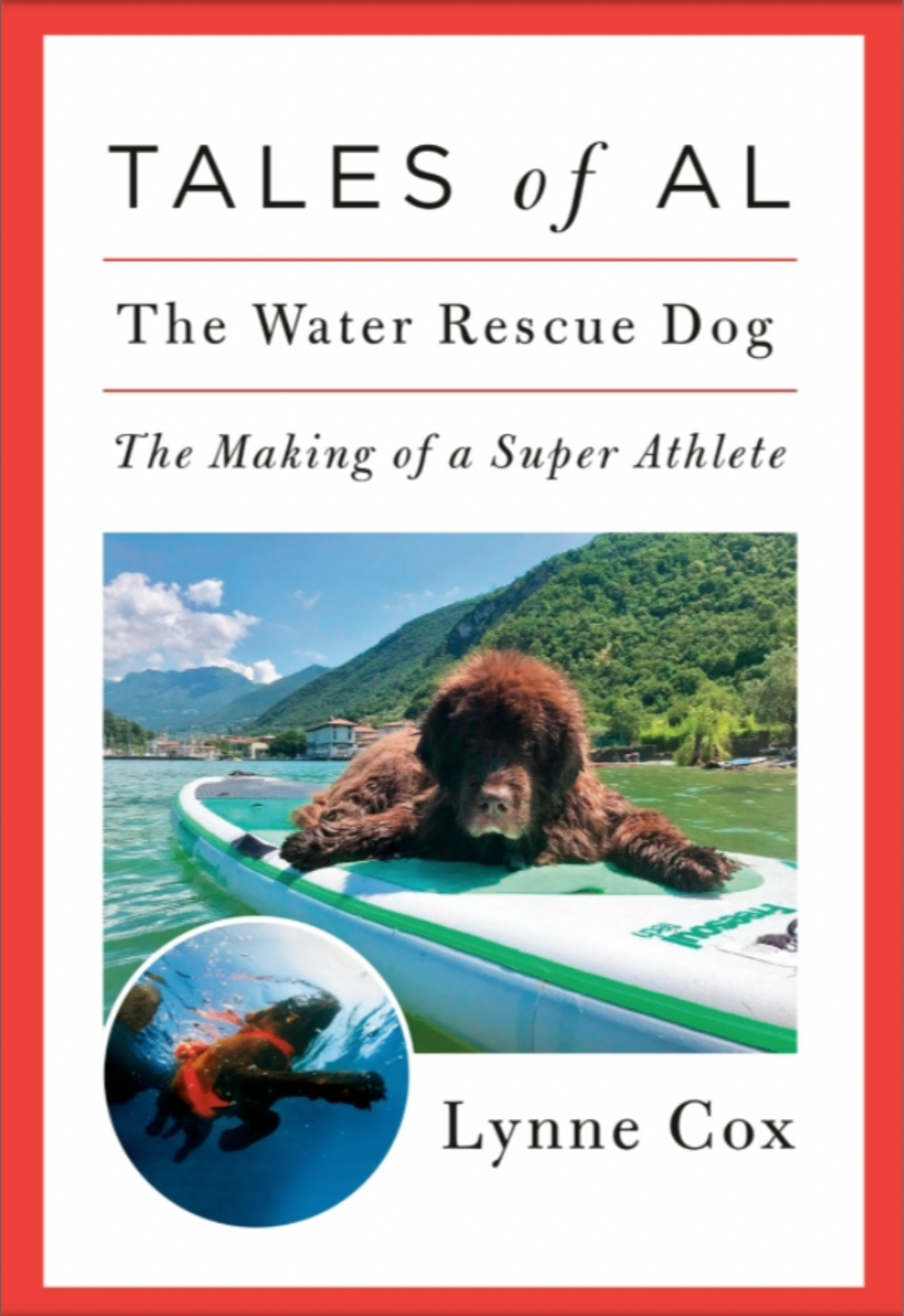 The cover of “Tales of Al: The Water Rescue Dog”

During Cox’s roughly 10-day trip along with the dogs and trainers of SICS, or Scuola Italiana Cani da Salvataggio (Italian School of Rescue Dogs), she uncovered the challenges, expectations, and potential disappointments that go into preparing the many Newfoundlands, German shepherds, and golden retrievers for their lifeguard duties.

She discovered that the dogs are treated well and are never forced to jump out of the helicopters. In fact, they are never forced into the water at all. Instead, each dog is taught to feel safe in the water, gaining enough skills to feel confident even as the circumstances escalate. Sometimes, older dogs even swim along with the puppies, so that the puppies begin to imitate the movements.

What’s more: “During the course of being there, I discovered the story about Al.”

Al, a 2-year-old chocolate Newfoundland, is unlike any of the other dogs in the rigorous training program. Unruly and unpredictable, “Tales of Al” follows her journey toward becoming a water-rescue dog, and the people and dogs around her who make the process possible.

In Cox’s latest book, there are also plenty of echoes of herself, a world-renowned swimmer known for her own unorthodox methods of swimming the most treacherous waterways without a wetsuit.

Memories from Cox’s lifetime in the water are sprinkled throughout “Tales of Al,” such as teaching 5-year-old Jimmy, who had been afraid of the water after being thrown into a pool as a misguided teaching method.

Much like the owners and trainers of SICS, Cox’s teaching strategy was more about slowly gaining courage, not through fear, but through gentle guidance.

Cox also acknowledges her own feats of courage, such as learning to avoid icebergs when swimming in Antarctica, and how to avoid whirlpools in the Strait of Magellan, none of which were accomplished without thorough research and learning from experts first.

“When I went off to do these different great adventures or to try to break world records, there were people that I met along the way that offered their knowledge, their support, and logistical help that made these things possible, and without that I could never have done what I’ve done,” said Cox. “So I thought that writing about these adventures was a great way to share them and hopefully inspire people to take on your own adventures, but also to acknowledge those who saw the possibility in the dreams that I had.”

As her seventh book, “Tales of Al” is nothing like her previous works, Cox explained.

It wasn’t until the pandemic, after allowing the experience in Italy to simmer for 10 years or so, that Cox was inspired to begin writing at her home in Long Beach.

While most of her questions had been answered during her journey, Cox immersed herself in research, ensuring that her understanding of the roughly two-year training process was thorough.

Unlike Cox’s experiences writing her previous books such as “Swimming to Antarctica: Tales of a Long-Distance Swimmer,” writing “Tales of Al” was filled with joy, recounting her time on Lake Idroscalo.

“I would wake up at three in the morning and be wide awake, with ideas just flowing through my head,” said Cox. “The story came together very quickly, and I don’t think I’ve ever had as much fun writing a book as I did this time.”

After completing “Tales of Al,” Cox has discovered that for her, there is no formula to telling a story, and part of the process has been exploring the surprises within each book.

“Tales of Al” was released Tuesday, May 24, and is available through Penguin Random House publishing.