Walking into 70-year-old Kwang Nyon Kim’s shoe repair shop in West Long Beach is like taking a step back in time.

With aged paint on the walls and old industrial machines, Mills Shoe Repair has been standing for decades. Kim took over the shop nearly 40 years ago and hasn’t retired because the labor, as he puts it, has become part of his body.

But nowadays, with cheaper and lower-quality shoes being mass produced, shoe repairing is a dwindling business, Kim said.

“Cheap shoes are a problem for us,” he said in Korean.

That, combined with the economic roller coasters ignited by the COVID-19 pandemic, has slowed down business. Luckily for Kim, customers have started returning with shoes now that they’re going outside again.

Kim first assesses the shoes with the customer to see if they’re repairable. If so, typically, he’ll replace soles and heels for people’s prized footwear. He’ll work on anything from heels to boots to sneakers. 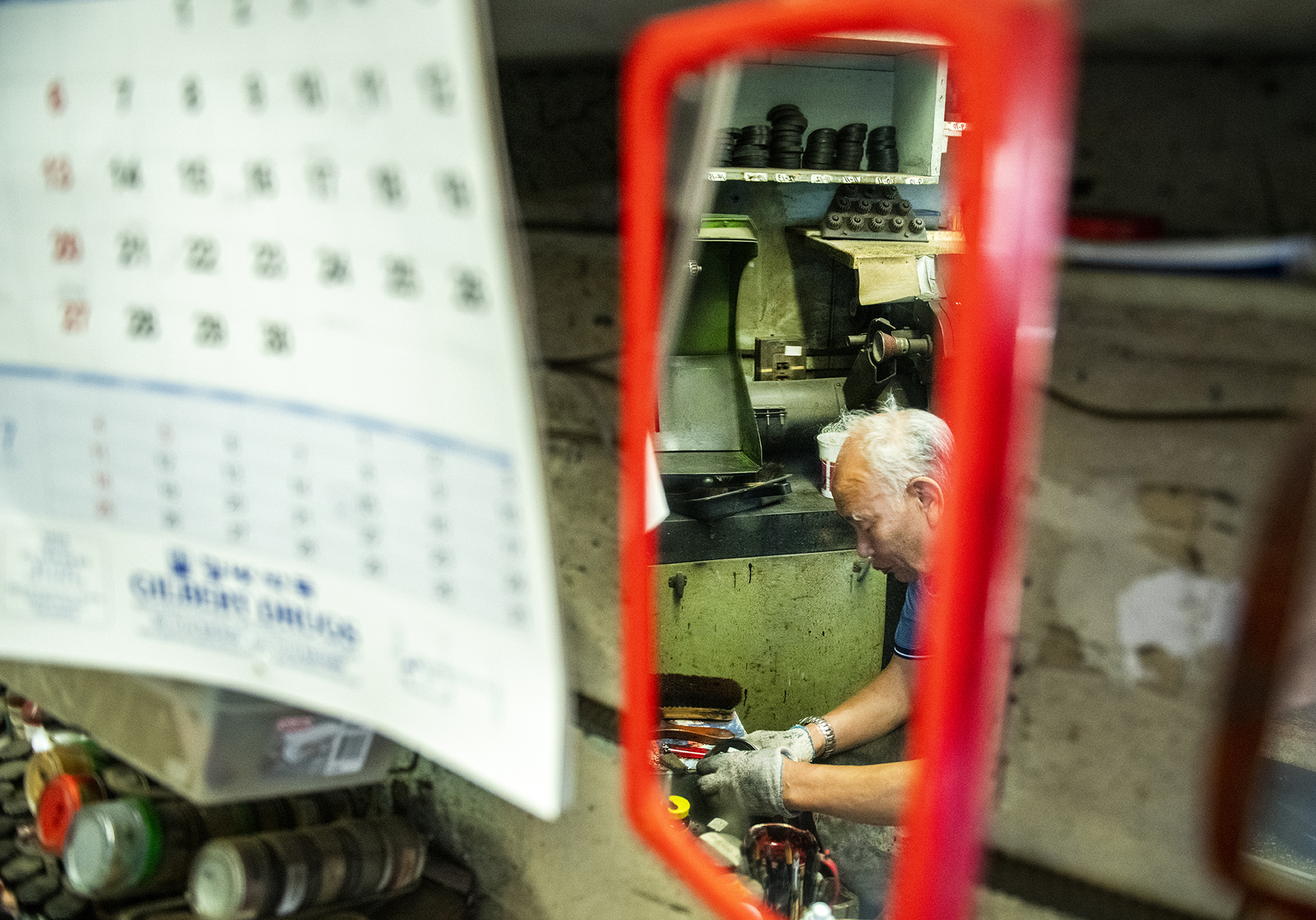 Kwang Nyon Kim is seen through a mirror in his shoe repair shop while he works in Long Beach Tuesday, June 22, 2021. Photo by Thomas R. Cordova.

He’ll start working on an order immediately. He jokes that it’s because he might not remember their names. He works so fast, sometimes he’ll finish several pairs of shoes in an hour. Kim handled the physically harder work such as sanding and hammering soles, while his wife, Song Soo Kim, handled more delicate repairs, such as sewing.

“They’re very excellent at what they do,” Soo Yon Kim, 40, Kim’s eldest daughter, said about her parents, who worked together at the shop for 30 years. “It’s actually not praise, it’s true.”

At his older age, Kim reads motivational quotes on Reddit, avoids getting sick, lifts weights and jogs—all so he could stay fit and motivated for the strenuous shoe repair work.

“He’s the healthiest person in our family,” Soo Yon said.

5 feet and 9 inches is just right

Kim was born in Gyeongsang, South Korea and moved to the U.S. in 1982. He took on the shoe-repair profession because he spoke limited English, he said.

A friend connected Kim to a mentor, who was a master of the craft after practicing it for 50 years in Korea and the U.S. Standing at 5 feet and 9 inches, Kim’s friend, he recalled, told him his height suited the sanding machines well. 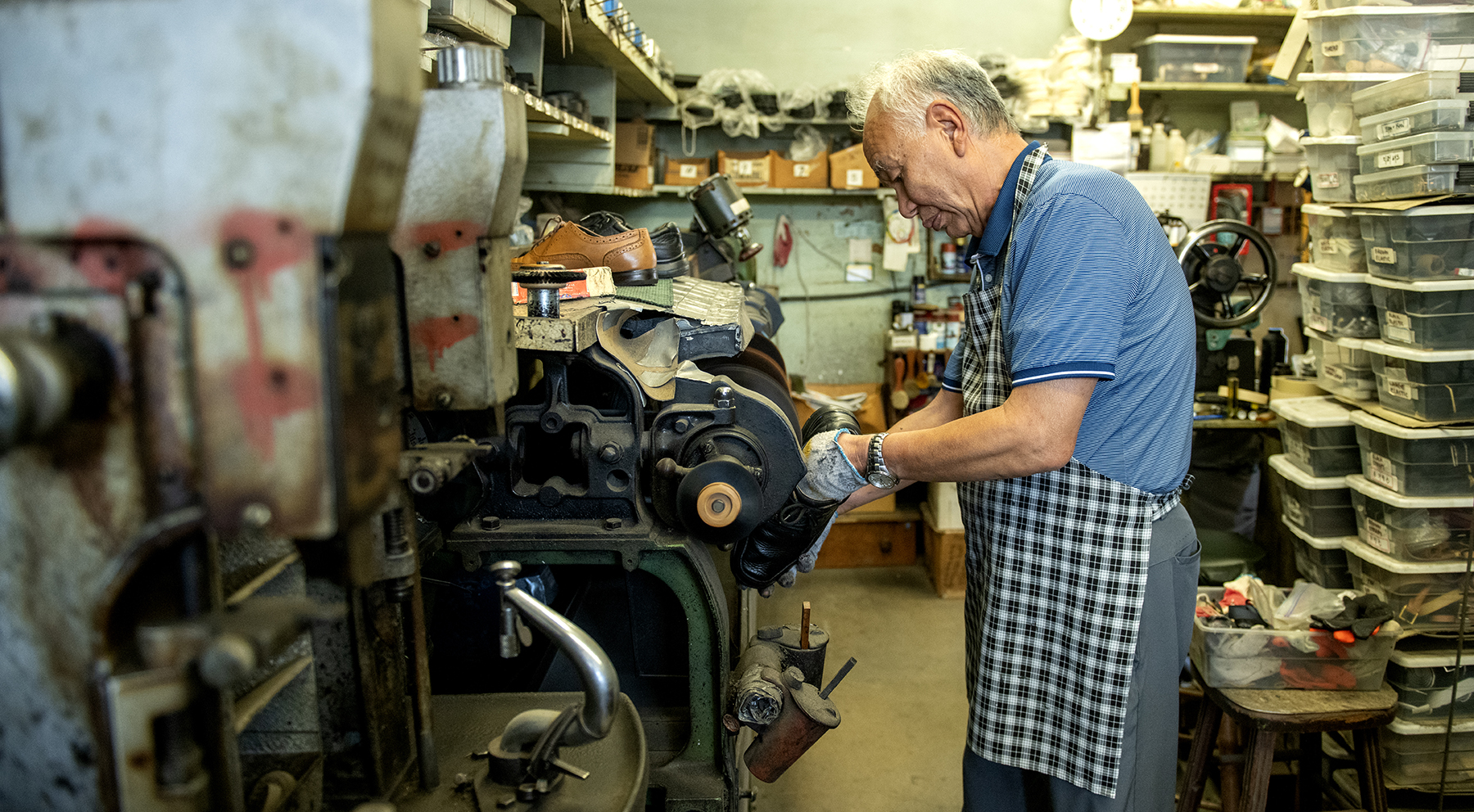 Kwang Nyon Kim works on shoes as he puts the final shine on them while in his shop in Long Beach Tuesday, June 22, 2021. Photo by Thomas R. Cordova.

While it’s never been a lucrative job, he said shoe repairing gave him a schedule that allowed him to spend time with his family.

Soo Yon recalls her and her younger sister coming to the shop from Webster Elementary School just down the street during a portion of their childhood while her parents worked in the shop. Kim and a friend built what they called a “treehouse,” which is still there, inside the shop above wooden shoe molds and aprons, for the sisters to read and play. Inside the makeshift room, the sisters drowned out the sound of loud sanding and sewing machines with a television, learning English from shows like “Sesame Street.”

Kim’s wife, Song Soo, was the face of the shop to customers, Soo Yon said, describing her as an extrovert who “tried to make everyone her friend.” She was “someone you want a hug from,” she said. 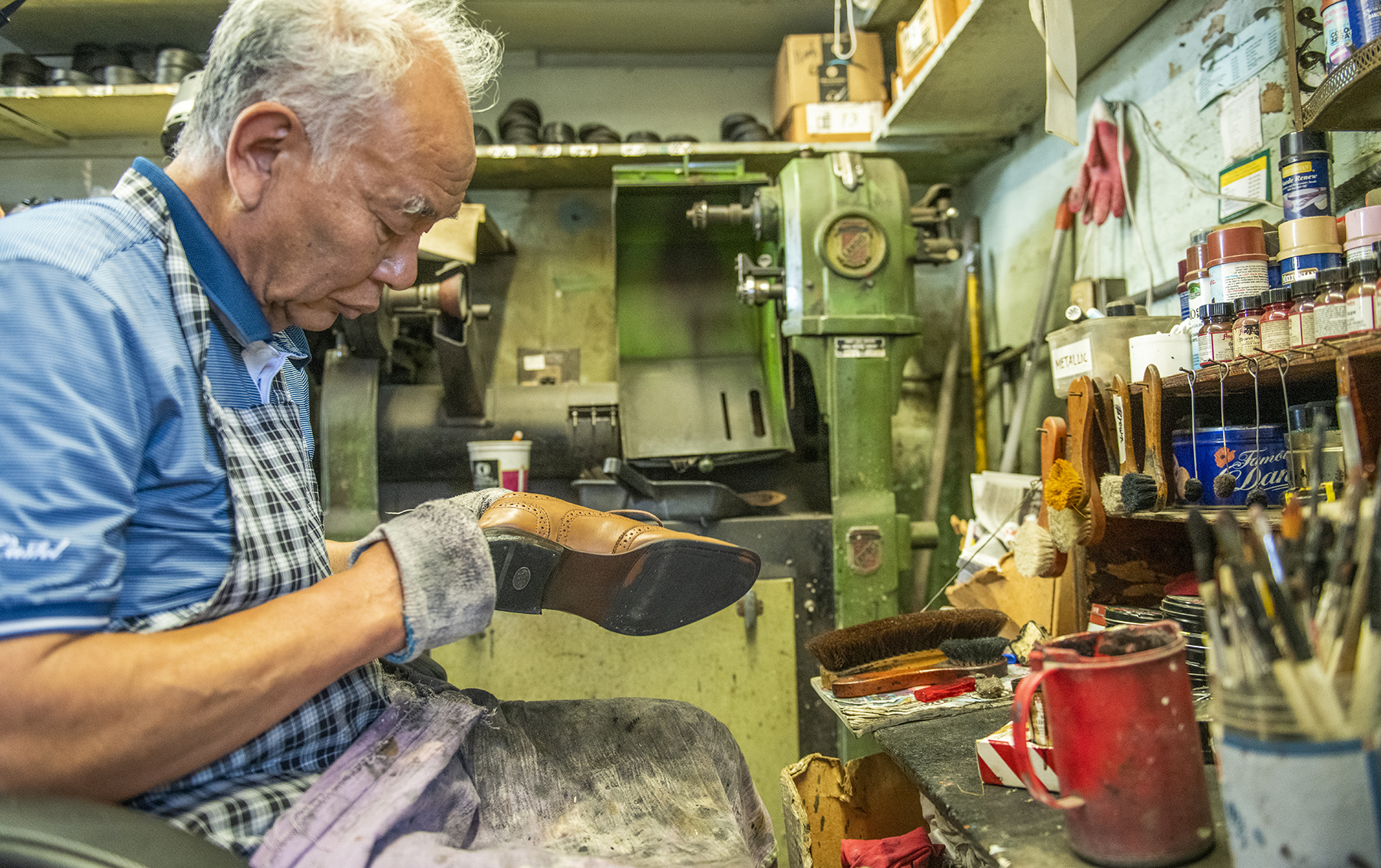 Kwang Nyon Kim applies polish to a shoe as he puts a shine on it while in his shop in Long Beach Tuesday, June 22, 2021. Photo by Thomas R. Cordova.

But in 2010, Song Soo collapsed at the shop from a brain aneurysm. She later died at Long Beach Memorial Hospital.

After about a month off from the shop, Kim returned to work.

His younger daughter, Linda Hwang, 40, worked with him at the shop. To be in the same place where his wife collapsed and customers asked for Song Soo, his daughter, Soo Yon, said she admired his strength to work again.

“I have tremendous respect for him to then do all of it on his own.”