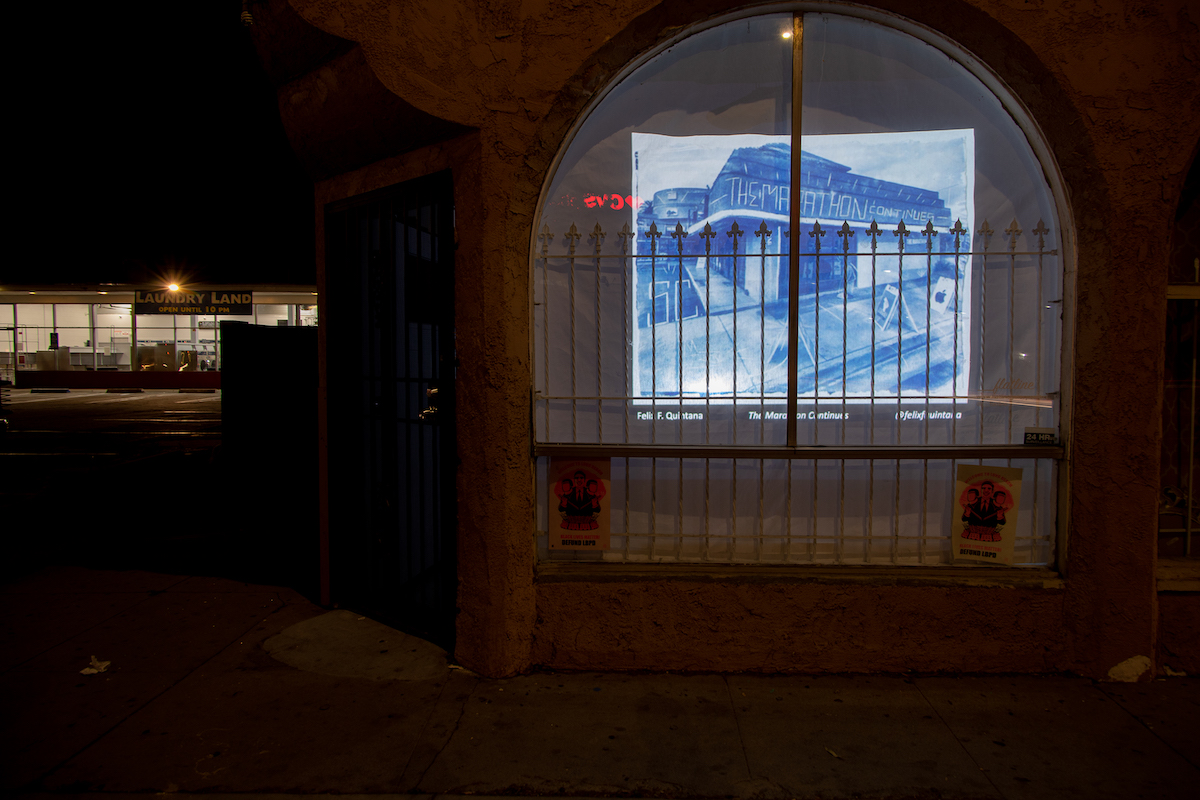 “The Marathon Continues” by artist Felix F. Quintana in Flatline Gallery’s “Never Fade Away,” up through July 5. Photo by John Mueller.

If you’ve driven north on Atlantic Avenue at night over the past few weeks, just past 60th Street, you may have noticed the glow of a projection in the front window of a somewhat inconspicuous facade.

The public art installation is a part of “Never Fade Away,” Flatline Gallery’s latest exhibition that, initially, shed light on the Latinx experience but grew to include works by Black artists. Curated by Gloria Sanchez, “Never Fade Away” features artists from across Los Angeles whose photographic works depict the “broad spectrum of local iconography, visual culture, and inner city communities of color they grew up within.”

“The title was prompted by the idea that if we don’t write our own histories, they will be written for us,” Sanchez said.

Some of these artists include Valerie J. Bower, Melinda Sanchez and Antonio De Jesus Lopez, who grew up in Wilmington, and Felix F. Quintana, whose artworks stem from his experience growing up in Lynwood and South East LA. 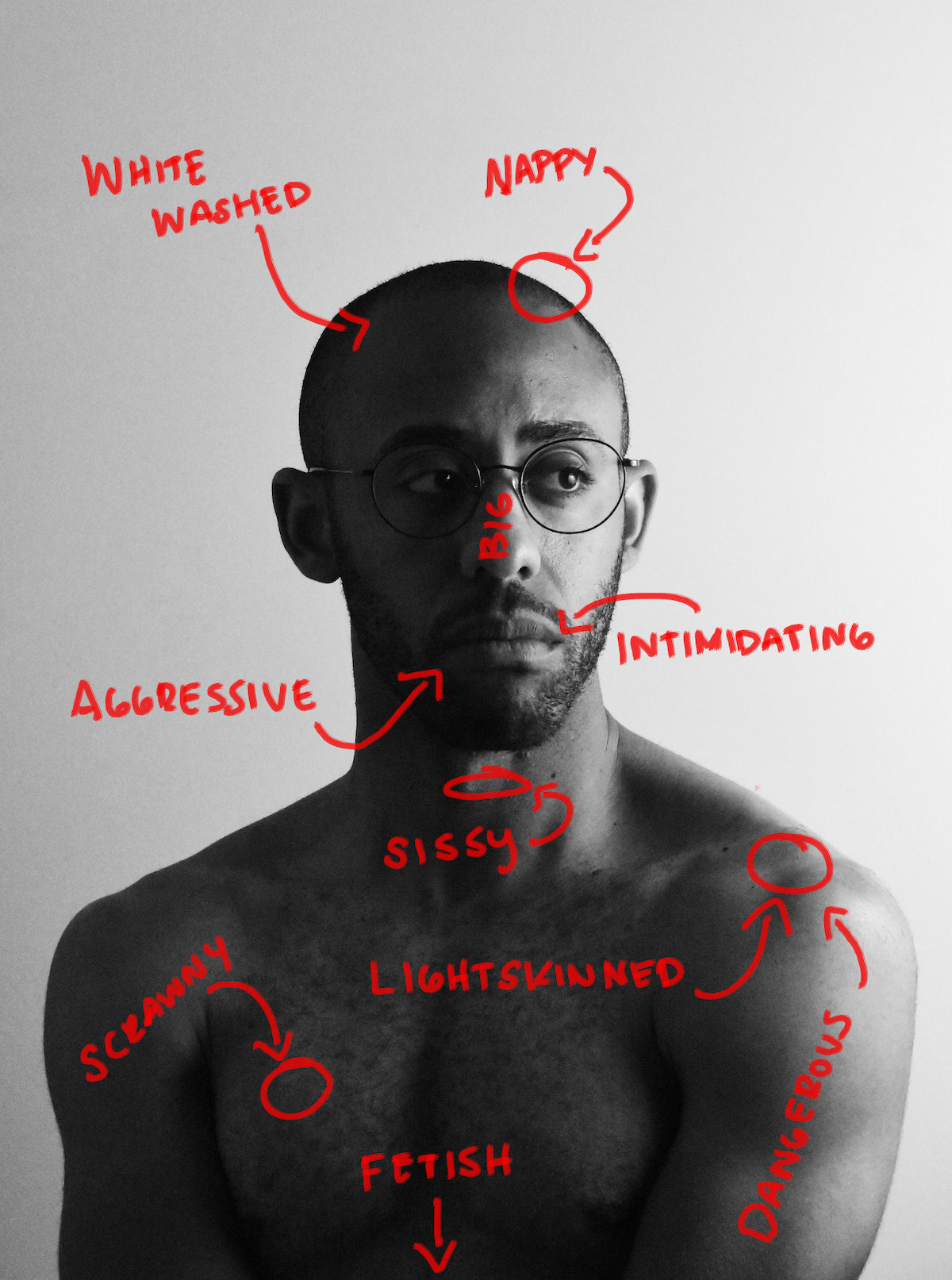 “Dissection of The Black Man” by artist Derrick Boutte in Flatline Gallery’s “Never Fade Away” up through July 5. Courtesy photo.

“An overarching theme within the works is the resilience or ‘Ganas’ that a lot of BIPOC communities personify just by living and surviving day to day under poverty, discrimination, community and systemic violence, and environmental devastation,” Sanchez said, adding that residents of Wilmington and Long Beach are disproportionately affected by pollution from the ports of Los Angeles and Long Beach.

“We find ways to sustain our joy by means of learning to appreciate the beauty in simple, ‘inanimate’ things, or by creating a community of support and rituals. We keep expressing ourselves creatively through art, murals, tattoos, Mariachi music, graffiti and Lowrider culture. We maintain a strong sense of self by asserting a life of spiritual vitality, knowing that life is hard, but still taking time to reflect with gratitude for the beautiful things we are breathing in from all vantage points.

We tend to our gardens (inside and outside), smell a rose down below, or look up in the sky at a tall palm tree. Though we are working class and the hustle never stops, we find those moments of happiness and magic in our immediate spaces and the people around us.”

But as Elizabeth Munzon, who manages the small North Long Beach gallery, and Sanchez were installing the exhibition, anti-police brutality protests following the killing of George Floyd had become widespread.

“The current state of the nation made me contemplate pushing the opening date, but as me and Gloria started talking, we realized that the theme of the exhibition touched on the many issues brought up during the protests, and most importantly the exhibition is about being resilient through hard times,” Munzon said. “The Black community shares many of the same struggles and moments of resilience.”

So, the two put out an artist call for Black photographers documenting the Black experience and received responses from all over the country, from Texas to Missouri and back to California.

Works by artists Derrick Boutte, Britney Orina, Jamie Robertson, Alexis Rivierre and others were incorporated into a public art extension (the projection) in solidarity with Black Lives Matter and to celebrate Black lifestyles and culture. 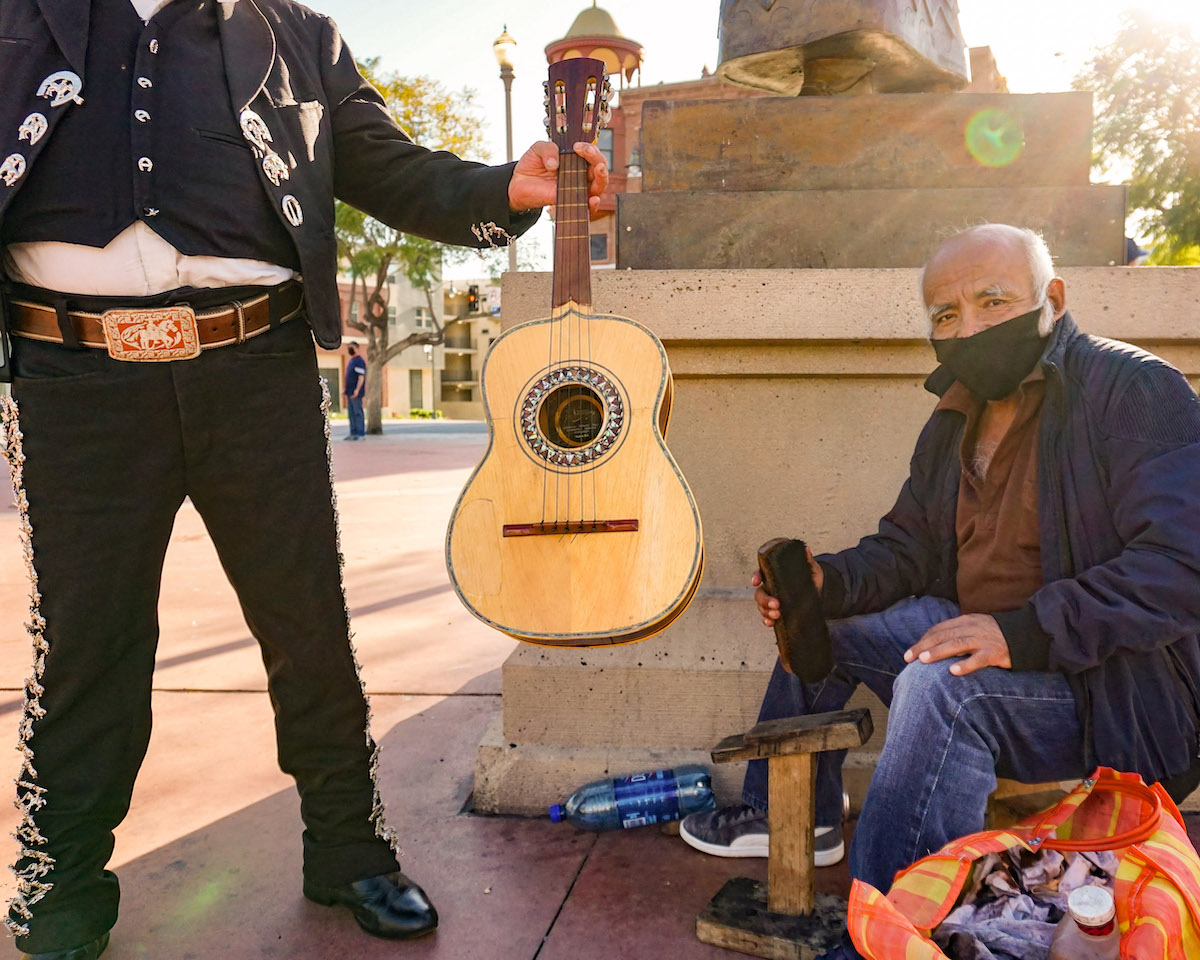 “Plaza Duo” by artist Melinda Sanchez in Flatline’s “Never Fade Away” up through July 5. Courtesy photo

Though the exhibition opened earlier in June, the gallery had to remain closed because of COVID guidelines, so Flatline’s projection allowed it to publicly display the artworks while still adhering to safety orders, all the while activating the gallery’s little slice of sidewalk.

The response Munzon has received so far has been positive.

“Never Fade Away has made Black and Brown viewers feel like they are being represented within a gallery/exhibition setting,” Munzon said. “This show has also made some photographers come out and show their work who said they don’t normally do so, but wanted to show their work now more than ever.”

“Never Fade Away” is on view by appointment Thursday – Sunday 2 to 7 p.m. through July 5 at 6023 Atlantic Ave. The public art installation is on view Thursday – Sunday, 9 p.m. to midnight. Email [email protected] to schedule a viewing, or check out the virtual gallery tour at flatlinegallery.com/virtual-tour.