In the week leading up to Kym Estrada’s monthly pop-up, the 29-year-old baker of San & Wolves Bake Shop, has little time to think of much else besides fridge space and bake times.

That’s because in a three-hour frenzy she’ll sell out of all 2000 of her vegan Filipino pastries, a mix of bright purple ube cookies, donuts, pan de sal, and fluffy ensaymadas and bibingkas.

Did we mention she works entirely by herself?

“It’s a lot, I die sometimes,” she said with a wry chuckle.

Despite all her preparations, of those who eagerly wait in a line that wraps around the building and down the street at a coffee shop in Los Alamitos, some will walk away empty-handed.

She’s looking for a brick-and-mortar to remedy this—a shop with an industrial kitchen and wiggle room. These days she’s working out of the narrow kitchen in the back of Teofilo Coffee Company, a Filipino coffee shop in Los Alamitos where she also hosts the pop-up.

While there, she’s been able to narrowly satisfy her ravenous fan base (over 11,000 on Instagram alone) with weekly pre-order “drops,” where Estrada will offer a variety box with five or six kinds of vegan pastries to choose from.

Those, too, sell out within minutes.

It wasn’t always like this, Estrada admitted. But the craze of plant-based eaters appeared to have kicked up in November last year, she said. Perhaps it was word of mouth, or photos of her vivid purple, sugary creations that hit the sweet algorithm spot on Instagram that catapulted her success.

Others return for peace of mind. San & Wolves’ pastries are nut, soy and palm-oil free. And all of her scratch-made pastries, down to the butter made in-house, is 100% vegan.

Then there are the nostalgic eaters—similar to Estrada—seeking that warm, flaky reminder of family.

“I just wanted to make something I grew up eating,” she said. “Ube is so nostalgic to me. Growing up, I would go to Filipino bakeries like Goldilocks and get ube ensaymada. That’s something that once you taste it, it instantly brings you back home.”

Estrada wasn’t born in the Philippines, she added, she’s first-gen and grew up with her family in Duarte, a city furthermost inland of LA County.

For assurance, though, she’ll regularly defer to her boyfriend, who did grow up in the Philippines “and knows the flavor profiles” for the final taste test. If both her boyfriend and parents give the green light, she knows it’s a success.

When Estrada transitioned to veganism 10 years ago for ethical reasons, she began baking out of necessity.  Filipino cuisine, she explained, relies heavily on meat and dairy. In the beginning, finding those substitutions was challenging—not like today where plant-based butters, even egg substitutes are available in major grocery stores. And vegan restaurants were virtually non-existent.

“You had to improvise,” she said.

Estrada had never entertained the idea of becoming a baker until just a few years ago, in 2017. She went the traditional path and attended college, prepared for the corporate world.

For three years Estrada worked in Los Angeles as a celebrity social media and engagement promoter for an entertainment agency—a “celebrity catfish” as she likes to call the job—for blockbuster stars such as Mark Ruffalo, Eva Mendes and Kyle MacLachlan.

It could be interesting at times, she said, her work would often put her backstage at glamorous TV sets like The Tonight Show or land her inside swanky parties. But ultimately, she found the job soulless, repetitive. She became restless. Her Journalism bachelor’s from Cal State Fullerton seemed less and less valuable as the days wore on.

Believing she might enjoy her job more in a new environment, she moved to Brooklyn, New York.

“I started baking even more in New York because I didn’t have any friends,” she explained. “It became a coping mechanism for my depression.” 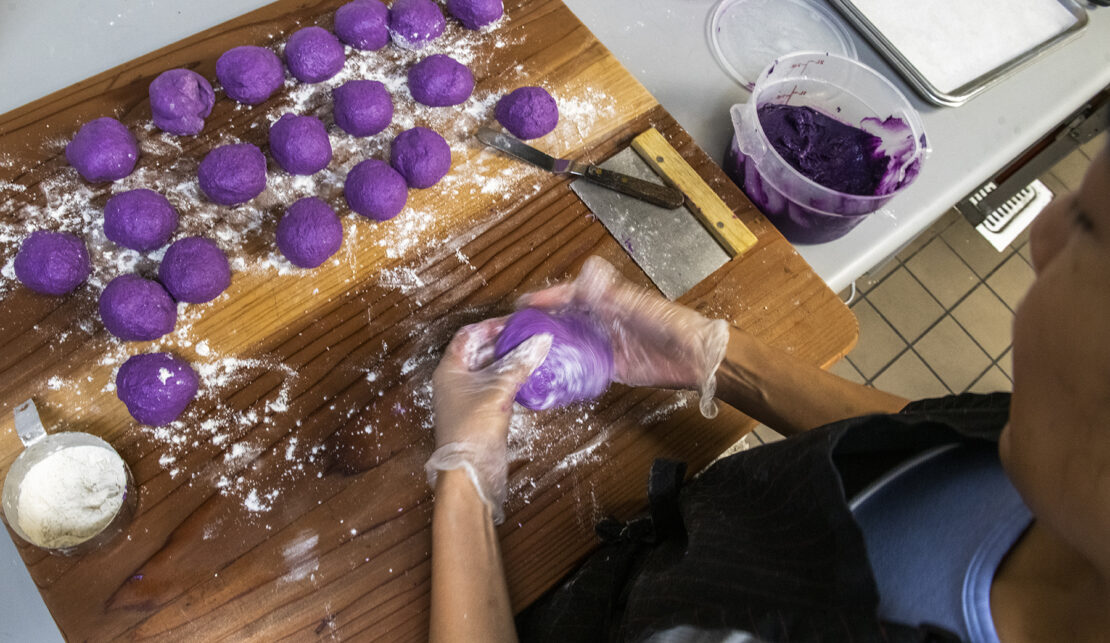 Kym Estrada the owner and lone baker of San & Wolves Filipinx Bakeshop works with ube dough as she makes her pastries in a kitchen of a Filipino coffee shop in Los Alamitos Friday, July 16, 2021. Photo by Thomas R. Cordova.

Her depression soared during the winter months. The icy slough made the pavement un-walkable. Some weeks she would be stuck inside for days. She became restless.

Impulsively, Estrada quit her job at the agency. She had no plan B, no other jobs lined up. But there was a vegan bakery in the Upper West Side. The fantasy of working all day with dough swirled in her mind and she applied.

“I said, hey I don’t have any experience, but I’m a hard worker. I can do stuff. I can lift 50 pounds,” she recalled. She was hired on the spot.

She worked at the bakery for two years before she felt confident enough to branch out with her traditional-style vegan pastries.

In those early pop-up days at farmer’s markets in Brooklyn and New York, Estrada offered pan de coco, a fluffy, subtly sweet bread roll traditionally topped with shredded coconut. She later expanded to the ube crumb cup, which is a cupcake-like dessert with a short bread base and ube hayala (a jam made out of ube, coconut milk and sugar).

Today, she boasts over 50 recipes.

“It’s about opening up other types of pastries to the world,” she said. “Just seeing people eat my favorite food is really rewarding.”

Follow San & Wolves on Instagram, here, or their website, here, to keep up with weekly offerings and pop-up dates. Teofilo Coffee Company is at 10525 Los Alamitos Blvd.

Editors Note: This article has been updated with the correct spelling of Mark Ruffalo, Eva Mendes and Kyle MacLachlan and the location of the bakery Estrada worked at which was formerly reported as Brooklyn.