Simply Salad opens in Long Beach, and the ‘salad wars’ are about to begin • the Hi-lo
- ADVERTISEMENT -

In August 2019, Daniel Gonzalez was the chief financial officer at Popeyes and became one of the masterminds that kicked off the Chicken Sandwich Wars that saw Chick-fil-A trying to defend its turf while countless other fast food chains scrambled to match the success of the Louisiana Kitchen’s new menu item. Today, as a co-owner of Simply Salad, Gonzalez said the “salad wars” are about to begin—and Long Beach is now on the frontline.

“The wars are coming,” Gonzalez told the Business Journal in a recent interview at the new Long Beach location, noting that healthy food options are on the rise. “Over the next decade, we’re going to be the fastest growing category in food.”

“With the salad wars, there’s a big prize,” Gonzalez said, adding that now that the Los Angeles brand has expanded into Long Beach, competitors are already chattering about following suit.

The healthy fast-casual eatery, which offers build-your-own salads and wraps, quietly opened its first Long Beach location at 1775 Ximeno Ave. on Oct. 3, and the reception has been warm, Gonzalez said.

The new store is the seventh location for the company but only the second south of the 105 Freeway, joining Gardena. A Cerritos location is expected to open in the first quarter of next year, Gonzalez said.

The first Simply Salad opened in the South Park area of LA in 2010 by Bruce Teichman and Cameron Lewis. The original site has a map of California that has stars at each location, with more to come.

“When you have a map of California and a few little stars, it’s kind of ridiculous,” Lewis told the Business Journal. “But we want to be everywhere.” 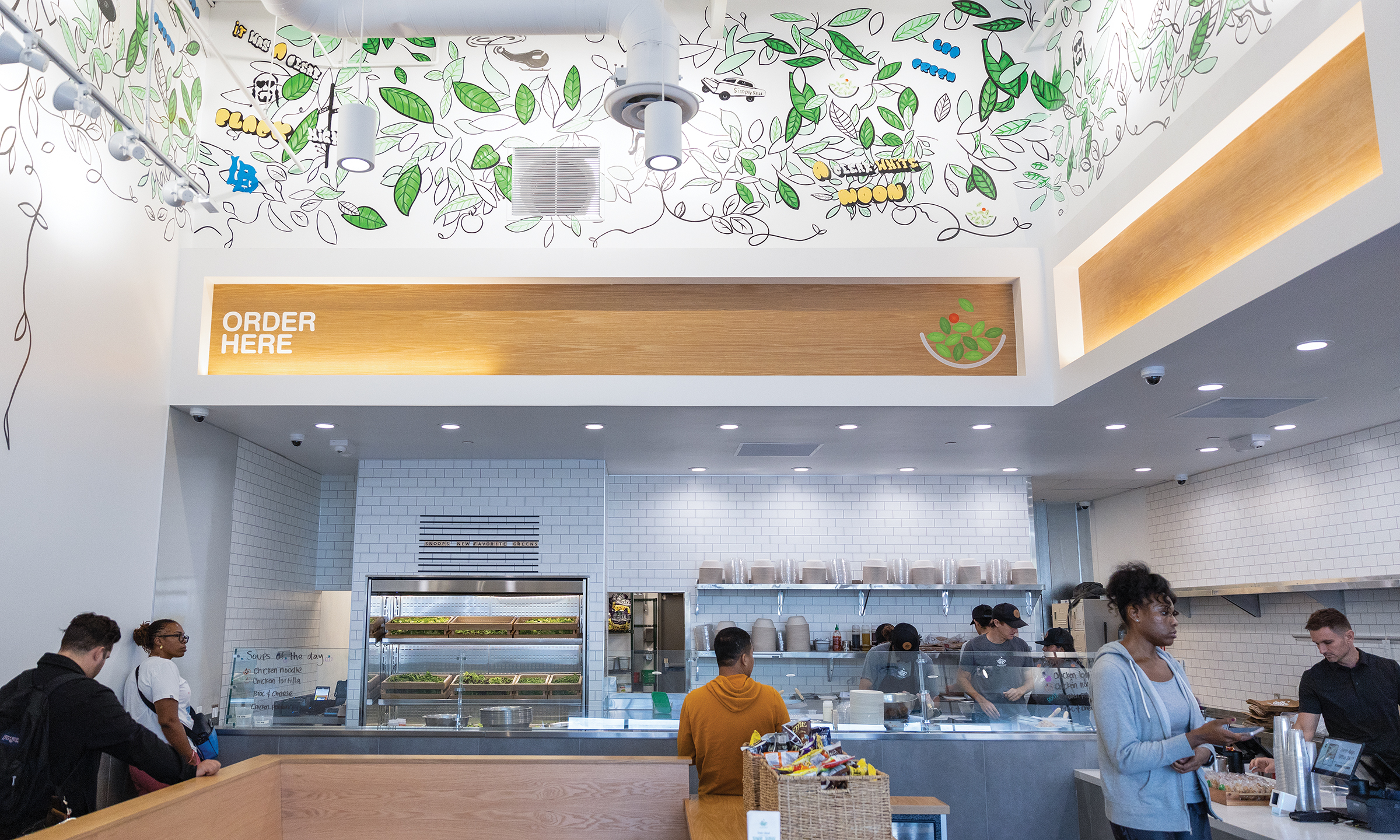 Customers line up for a healthy lunch at Simply Salad, a new fast-casual restaurant in East Long Beach Thursday, Oct. 27, 2022. The restaurant wanted to use art to connect to Long Beach’s creative atmosphere and pay homage to the city’s musical legends. Photo by Brandon Richardson.

Over the past two years, the company has been able to add more stars to the map in part thanks to a partnership with Gonzalez, who invested in the company.

With the Long Beach store, the partners wanted to encapsulate the city’s creative spirit and musical history. The space includes a mural featuring hip-hop legends and other imagery related to the city. One sign behind the counter reads: “Snoop’s new favorite greens.”

“Long Beach is full of legends, especially in music, and there’s a graffiti art culture, too,” Gonzalez said. “Warren G, Snoop Dogg, Sublime, VIP records—you can’t open here without paying homage to the legends that made LBC what it is.”

While the LA stores have transplants from all over the country, Lewis said the new store is being worked mostly by born-and-raised Long Beachers.

The Long Beach store is one of very few health-oriented food options near the Traffic Circle, which is dominated by fast food drive-thrus like Carl’s Jr. and Raising Cane’s.

“Obesity is a problem in America; fast food is generally not as healthy,” Gonzalez said, adding that customers value convenience over health. To that end, the goal at Simply Salad is to join health and convenience.

“Healthy food needs to find a way to become fast food and change what that definition is,” Gonzalez said. “Everyone is trying to figure out the right way to address the McDonald’s customer … in a way that’s healthy.” 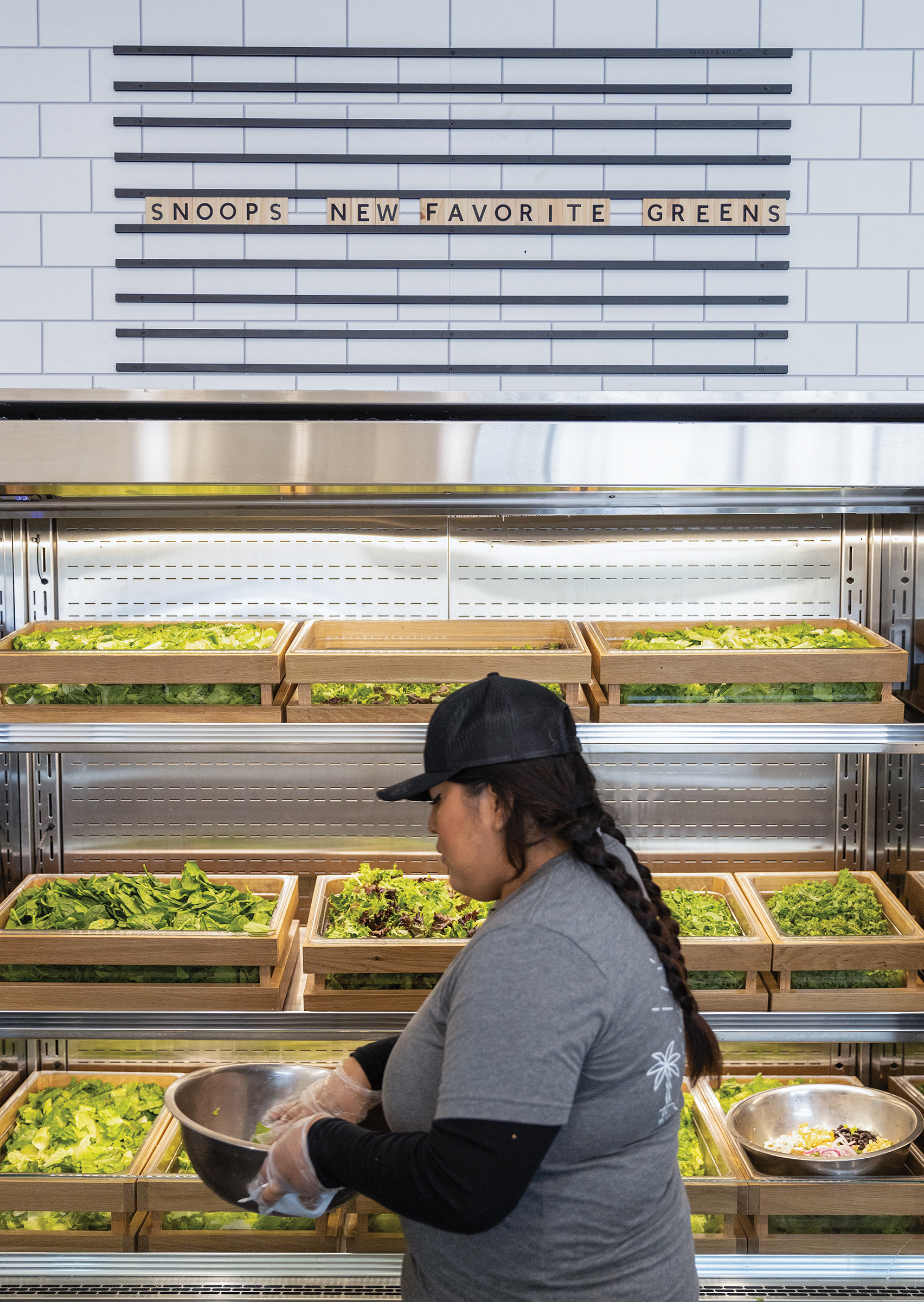 Ashley Sanchez grabs the greens to make a salad bowl at Simply Salad near the Traffic Circle Thursday, Oct. 27, 2022. The new fast-casual eatery has several nods to Long Beach’s musical fame, including this Snoop Dogg homage. Photo by Brandon Richardson.

The restaurant’s build-your-own salads start at $8.95—wraps at $8.45—and include five “simple” toppings and one dressing with additions costing 50 cents each. The combinations are seemingly endless, a choice of five types of greens, 65 toppings (including “premium” items) and 29 dressings.

Gonzalez said the menu has nothing that is unfamiliar or “scary to order” because they want the healthy options to be easy and accessible to everyone.

“We just want the basics and we want to do them really, really well,” Gonzalez said.

The company also has 12 signature chef-created salads and wraps that vary in price from $7.45 to $14.

The new location has not been heavily marketed, Lewis said, adding that they first want to work out any kinks with the store and its employees.

“You only get one shot at a first impression,” Lewis said, with Gonzalez adding that rather than spending on marketing, the restaurant is investing in food quality. Simply Salad’s ingredients are farm direct, Gonzalez said, which means it is never frozen, always fresh.

As the salad wars heat up, Lewis said the next and most obvious step—outside of further expansion—is the introduction of drive-thrus, which will help the concept compete with longstanding fast food chains. In the meantime, as more healthy concepts migrate to Long Beach and beyond, Gonzalez said Simply Salad welcomes the challenge.

“We’re not trying to take 100% of the market. I want good competitors to come over here and make us better,” Gonzalez said. “Bring it on. The customers win in the end.” 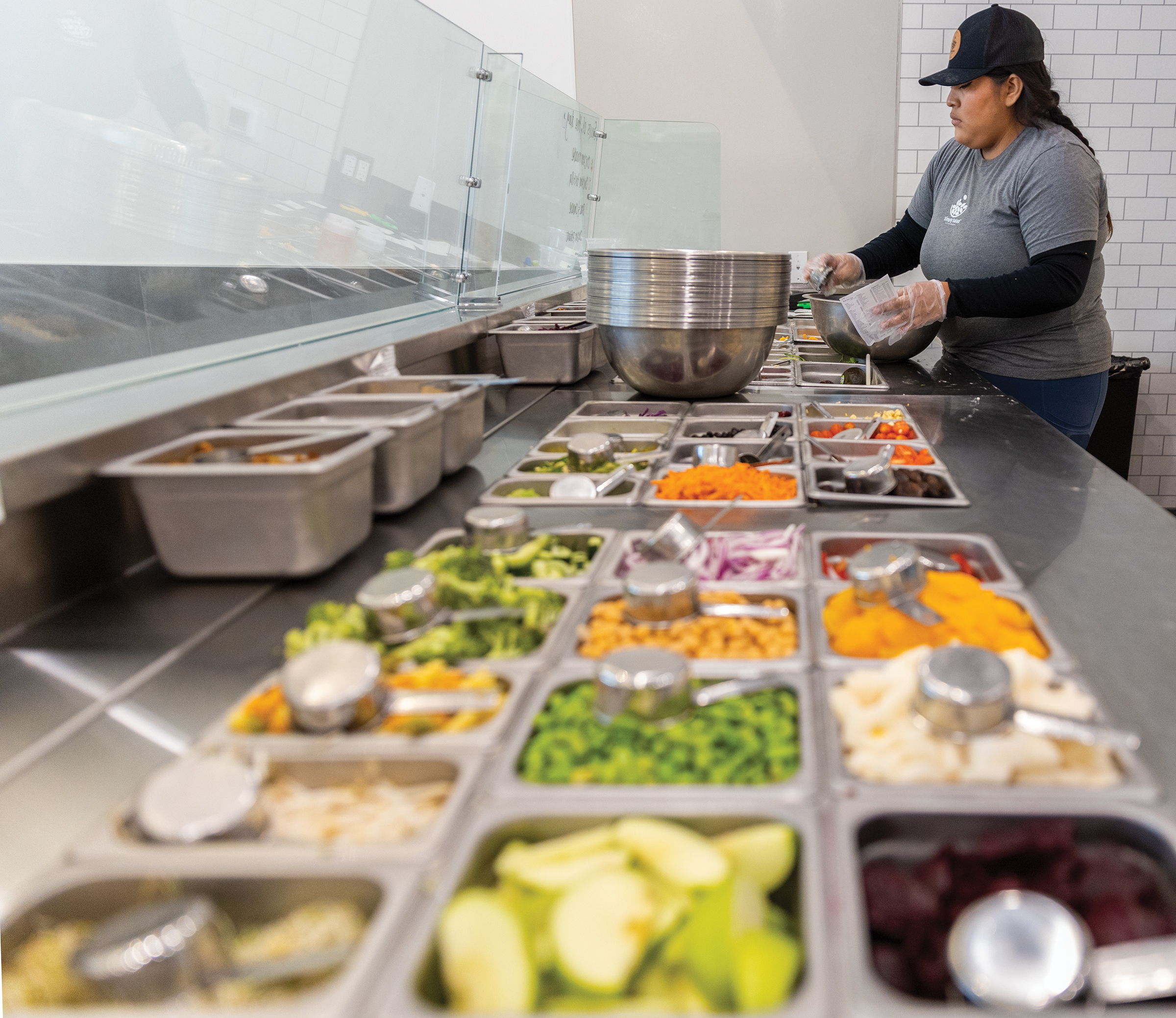 Ashley Sanchez adds ingredients to a bowl filled with greens as she makes a salad bowl at the new Simply Salad in East Long Beach Thursday, Oct. 27, 2022. Photo by Brandon Richardson. 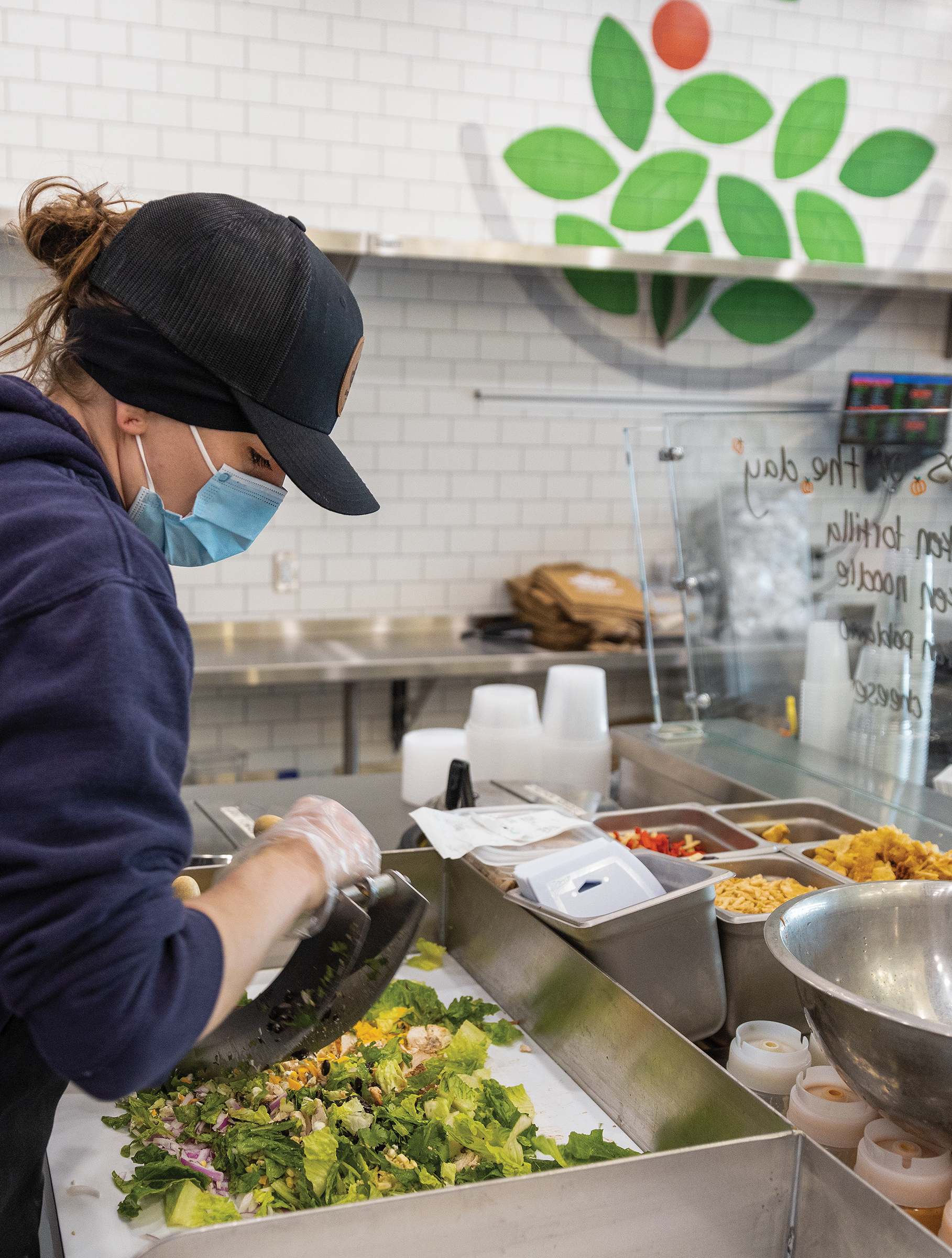 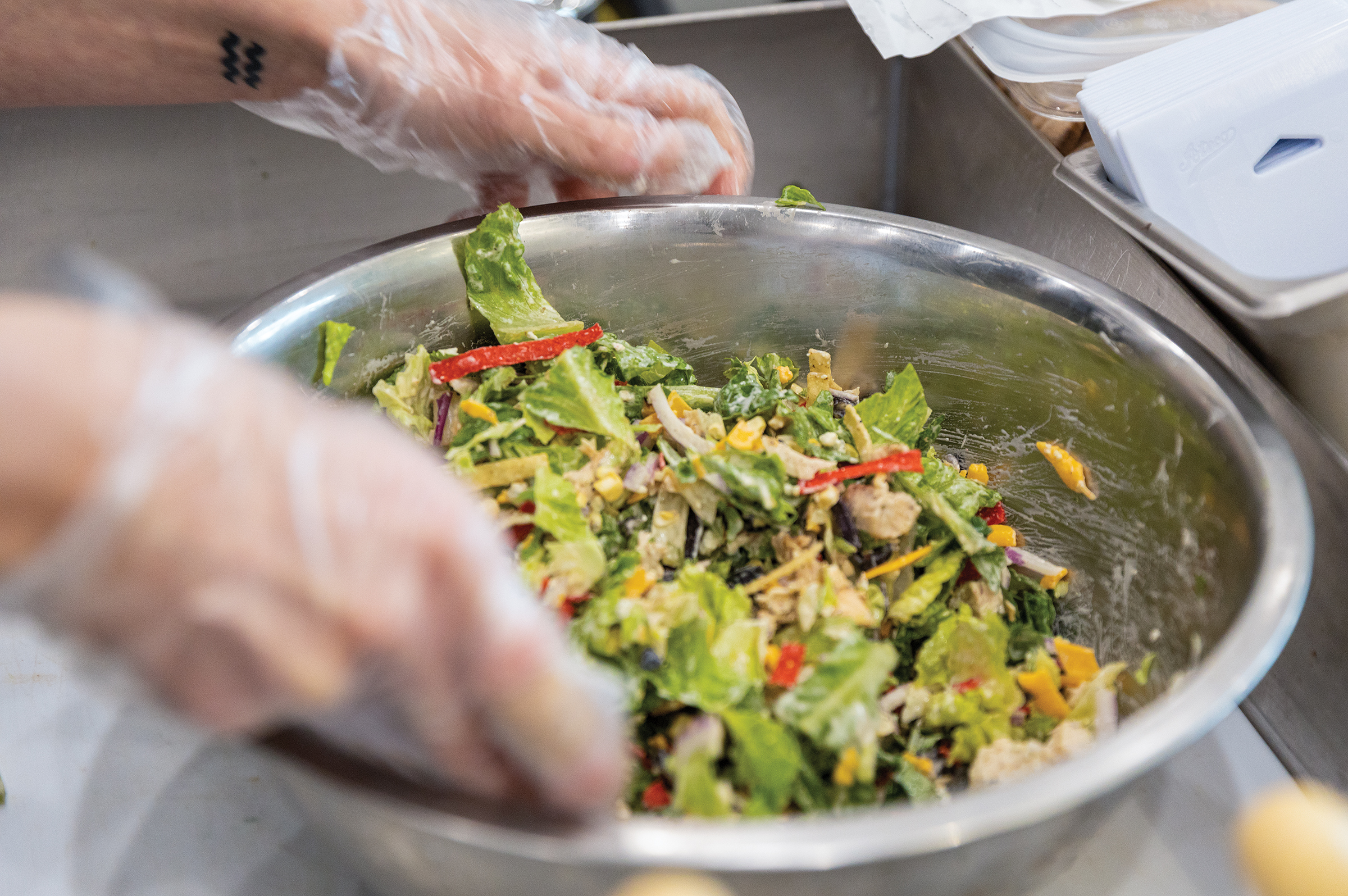 After being chopped, ingredients are put back in the bowl to have the dressing mixed in at Simply Salad near the Traffic Circle Thursday, Oct. 27, 2022. Photo by Brandon Richardson. 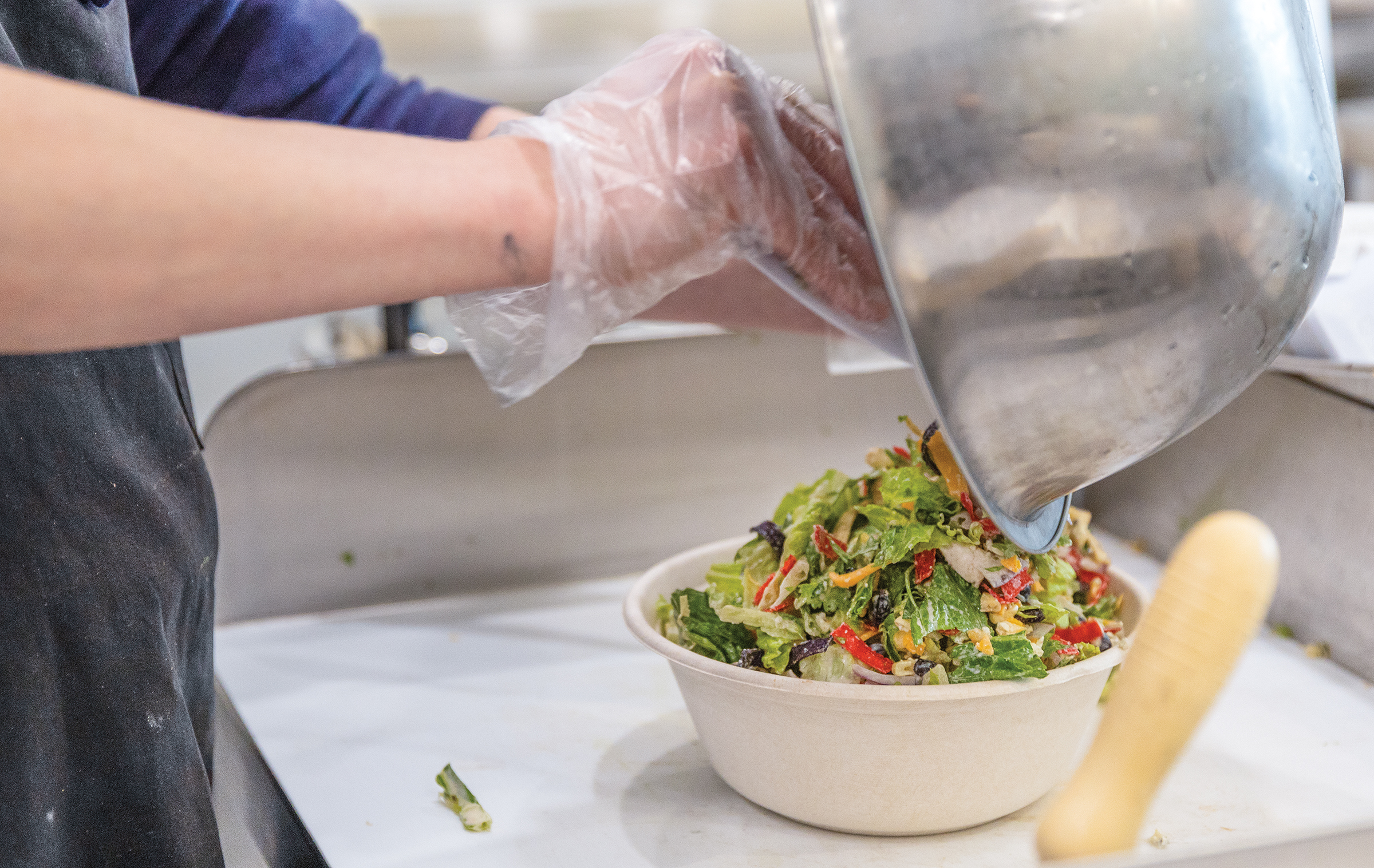 A worker scoops the salad out of the prep bowl and into the serving bowl at Simply Salad in East Long Beach Thursday, Oct. 27, 2022. Photo by Brandon Richardson.