A beautiful upright piano was recently donated and dedicated to local coffee house Viento Y Agua in Belmont Heights last week as part of a collaboration with the Long Beach community and Sing For Hope, a New York-based arts non-profit that places artist-designed pianos in public spaces around the world as a vehicle to make arts more accessible to the public.

The front of the piano is a vivid geometric piece with bright sunset hues and deep blues that, when viewed straight on from a distance, emulates the appearance of a crashing wave. The lid of the piano is adorned with puffy clouds, a cheery sun, vibrant marigolds—painted by the students—and a calavera, or sugar skull. The back of the piano features the red, white and green of the Mexican flag.

The piece was inspired to reflect the Mexican art adorning walls within Viento Y Agua and the overall Dia de los Muertos feel of the cafe, Manfredi said. For Viento Y Agua owner Bela Mogyorody, the new piano is a welcome addition.

“Art and music has always been a part of Viento Y Agua from day one, we started off as an art gallery,” Mogyorody said. “So the fact that we have a beautiful piano in there, that’s also a work of art—I love it.”

Viento Y Agua has had a piano inside its establishment for years, Mogyorody said, and was frequently employed by musicians who performed for open night mics before that was halted due to the pandemic. But the piano had fallen into some disrepair said Manfredi—the occasional sticky key, or off-tune notes—which presented its challenges for the teacher when she would present her monthly music concerts with her students at the business.

Manfredi, a mezzo-soprano and music teacher since 2002, had already decided she would donate another piano, an upright piano built in 1915 she had at her home where she teaches. But when she stumbled upon a Facebook post from an artists group that had posted an application announcing Sing for Hope was seeking collaborations, she knew she could do more.

Manfredi reached out to Sing for Hope, submitted a proposal and design for the piano with the help of artists Young and Dalton, and the non-profit eagerly accepted. Out of the over 500 pianos the non-profit has placed in parks, public spaces, refugee camps and transit hubs around the world since launching the initiative in 2010, this would be the first Sing for Hope piano in Long Beach.

The project came underway in the fall of 2020, Manfredi said. Between intermittent periods of lockdown, the artists and families arrived in masks to help paint, with over 20 students contributing to the marigolds. 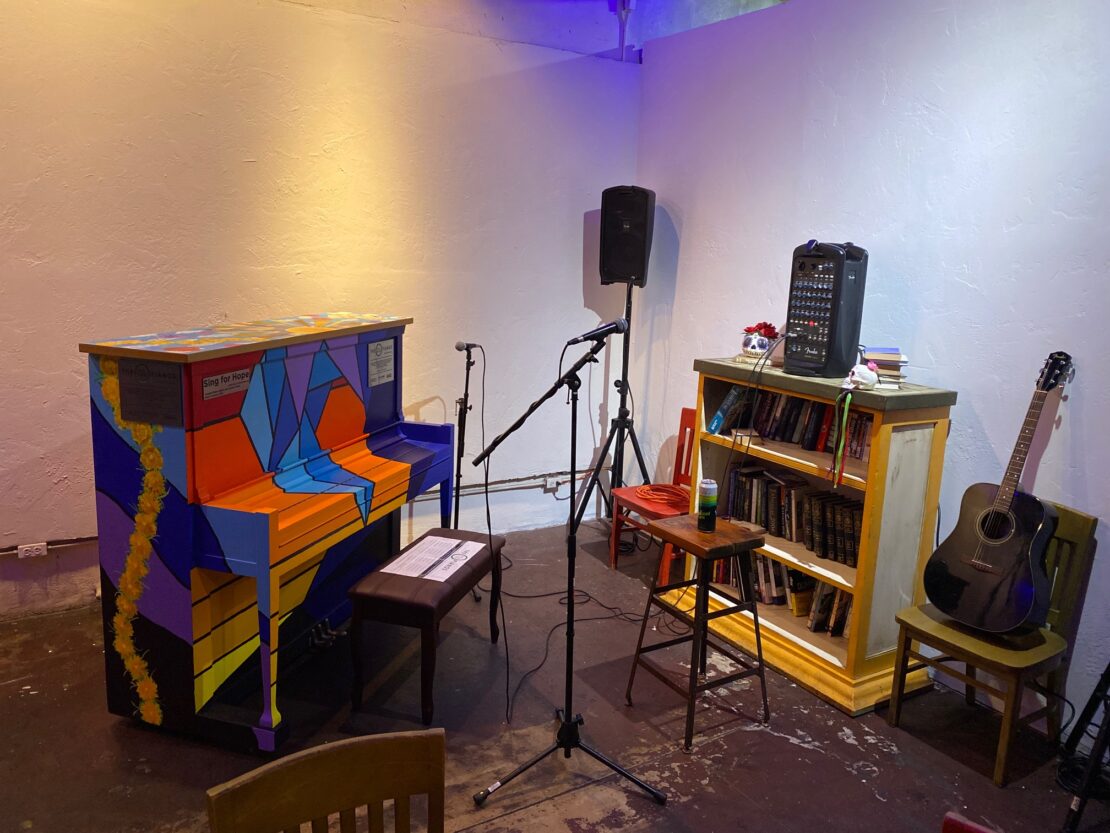 Sing for Hope helped with sponsoring the project, creating specialty plaques and offering funds to cover supplies such as paint, tuning and other technician costs, as well as some money to pay the musicians who performed during the dedication ceremony on Nov 1, which also coincided with Viento Y Agua’s 19th anniversary in Long Beach.

The dedication featured a performance by Downey-based violinist Ricardo Rios, who performed a duet with Manfredi of the song “Proud Corazon” from Disney’s “Coco” soundtrack, of which the piano is also named after.

“There’s been a lot of excitement, seeing it come together, then seeing it in final form, and everyone was just incredibly wowed,” Manfredi said.

The piano will be available for anyone who wants to tickle the keys, Mogyorody said, though children looking to have a wild, finger-flailing jam session may be limited—it is a cafe after all.

Though Viento Y Agua was forced to cut hours and open mic nights due to the strains of the pandemic, Mogyorody said he’s happy that he’ll be able to continue daytime music performances at his cafe, including Manfredi’s monthly concerts.