It is with full awareness that these words will most certainly start some debate, but I have to say that Sideburns has, without any doubt in my mind, the best burger in Long Beach.

Sideburns is a small, understated neighborhood spot in North Alamitos Beach. If you’re wondering about the name, it’s attached to and owned by its neighbor, The Stache Bar, at  939 E. Fourth St.

Inside Sideburns you’ll find a counter to place your order before a pass-through window, with a half dozen high school cafeteria-style booths running along walls that have been painted with large cartoons of hamburgers and fries. A string of café lights lazily zigzag across the ceiling offering not a trace of ambiance.

Formerly a run-of-the-mill taco spot called La Frida, the crew at The Stache Bar took over in 2019 using the kitchen for bar food. During the pandemic shutdown of 2020, Sideburns began serving takeout, and now with everything re-opening, the restaurant has a life of its own serving “bar food classics from across the country with a specific inspiration from Midwestern bars,” according to The Stache website. 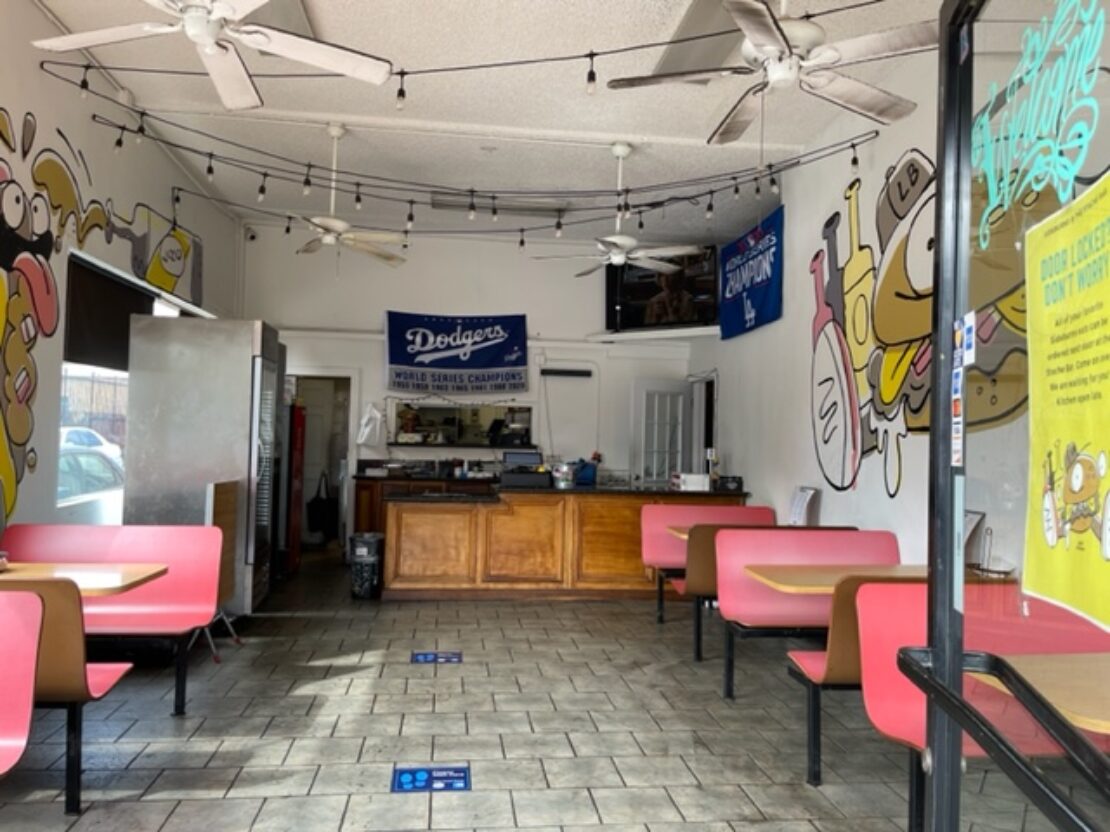 The inside of Sideburns, next door to The Stache Bar, at 939 E. Fourth St. Photo by Matt Miller.

Sideburns has mastered the feng shui of a burger, harmonizing the eater to everything within the paper wrapping. The combination of texture, bite, crunch, crisp, condiment distribution and topping proportion is the key to its success; if a burger is anything, it’s the sum of its parts.

Built from the bottom up, the toasted bun of The Works burger has quick-pickled Persian cucumbers, which add a delightful tang, a pop of acidity, and a perfect crunch sitting on top of sweet caramelized onions. A thick slice of tomato adds a juicy coolness, balancing out the other hot components; the chilled shredded lettuce creates a crispy grip keeping everything from sliding around.

The heat between beer-battered Portobello mushrooms and the patty itself perfectly melts a single slice of American cheese, gluing the two together.

Mathematically exact in quantity, a dab of mayo on the top and bottom of the bun is just enough to act as a conductor connecting each flavor together. As you sink your teeth through the sensation of flavors, temperatures and textures meld.

It’s not clear who invented the burger. Some say it was in 1895 at Louis’ Lunch Wagon, in New Haven Connecticut. Another story goes that the burger was invented in 1904 by Fletcher Davis, of Athens Texas, and was presented at the St. Louis World’s Fair. A fry-cook in 1916 named Walter Anderson invented a squat bun specifically to hold a patty of ground beef, like a small slice of meatloaf. But one thing is for certain: All of these visionaries tasted the same prophecy when they looked into the future, and it was The Works burger at Sideburns.

There have been only three other burgers spots of this caliber in my life: Big John’s in Brooklyn on Flatbush Avenue, down by Floyd Bennett Field (don’t bother googling, it’s long gone); Matt’s on Chicago’s once-famous Maxwell Street; and Hodad’s in San Diego’s Ocean Beach. If you’ve been there, you know what I mean.

When I went into Sideburns I wasn’t looking for a burger at all. I was reading about the “Midwestern-themed” menu items and realized that I hadn’t had a Chicago-style hotdog in forever with all the fixings: mustard, relish, tomato, pickle spear, sport peppers and a sprinkling of celery salt (sometimes with a fork full of sauerkraut too).

But the bun was totally wrong, it wasn’t poppy seed and it wasn’t steamed. And the “neon” green relish signature to Chicago dogs was neon’d in-house by taking regular pickle relish and adding food coloring, turning the relish somewhere between deep emerald and aquamarine, staining the bun and my fingers. 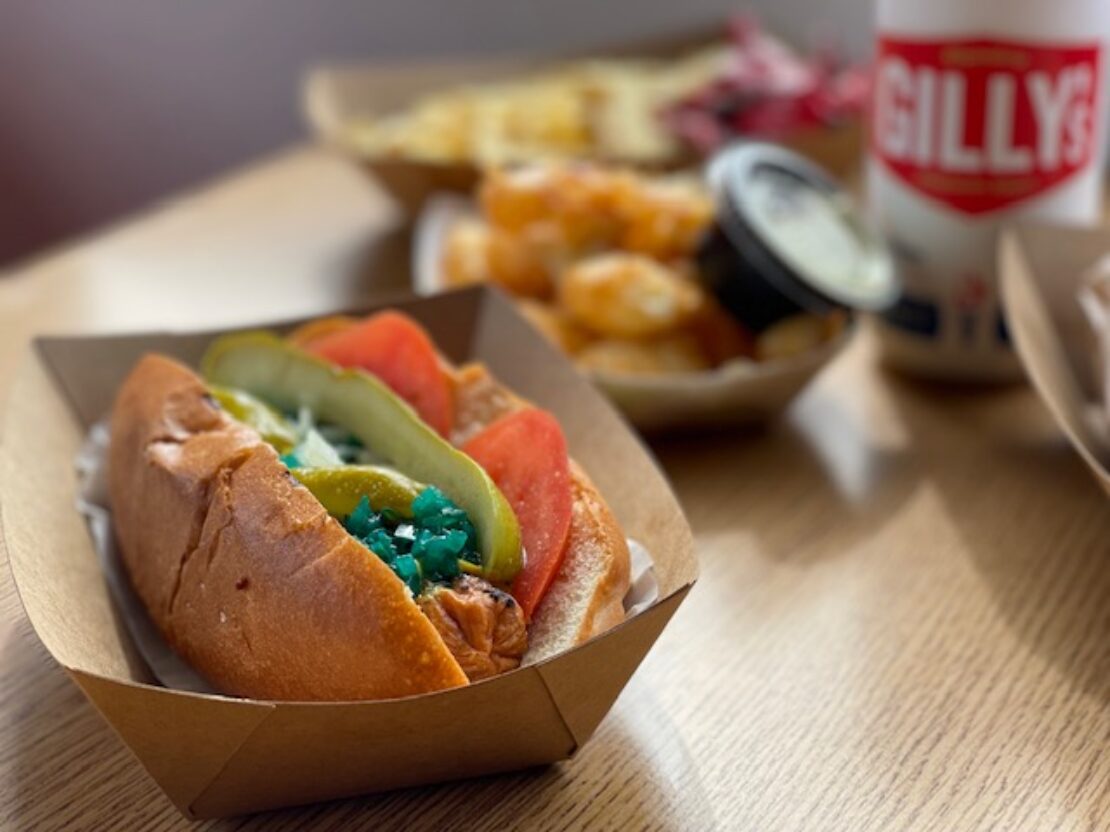 The Chicago-style hot dog at Sideburns in Alamitos Beach. Photo by Matt Miller.

The fried cheese curds are a throwback for anyone who ever spent time in Wisconsin and took a knee before entering the sanctity of the Mars Cheese Castle. While the process of deep-frying removes the squeak (fresh cheese curds squeak when you bite them), they are no less enjoyable.

Two people can eat for under $30