Streamed events and recorded videos cannot replace live music. The atmosphere and energy of a live show—feeling the music in your bones, performers feeding off the crowd’s energy, the crowd, in turn, feeding off what reverberates onstage—simply doesn’t translate through a computer or cellphone screen.

“For me, to go to a live show is the cheapest vacation I ever get,” said Rand Foster, owner of Fingerprints Music. “It just, you know, pushes a reset button, especially in times of stress. There is a lot of stress consuming our brainpower right now and I think if we had live music, it would be an outlet, an escape from it. It’s what I miss most in this COVID world we’re living in.”

Foster is the co-founder of the Summer and Music (SAM) event series which has brought free, live music to Downtown Long Beach the last 11 summers. The music series, which would normally kick off in late June and include events over the next three months, culminating with what has become Long Beach’s annual farewell-to-summer event, Buskerfest, in August, was canceled due to the coronavirus pandemic.

“We had big plans,” Foster said. “We make plans and God laughs, I guess.”

Time for a new plan, one involving either a live-streamed or digital alternative.

“All of a sudden, we are having conversations about something we can do and can we do it in a way that’s respectful to what we’ve done,” Foster said. “If we come at it with the right approach, I think it can be meaningful. There are things we can do in a digital space that we can’t do in a live space.”

With discussions in the early stages, Foster could not give details on what a digital SAM may look or sound like but said he envisions something that highlights the city—”a digital postcard to Long Beach”—and includes short films as well as utilizing other artistic mediums not usually featured in SAM events. 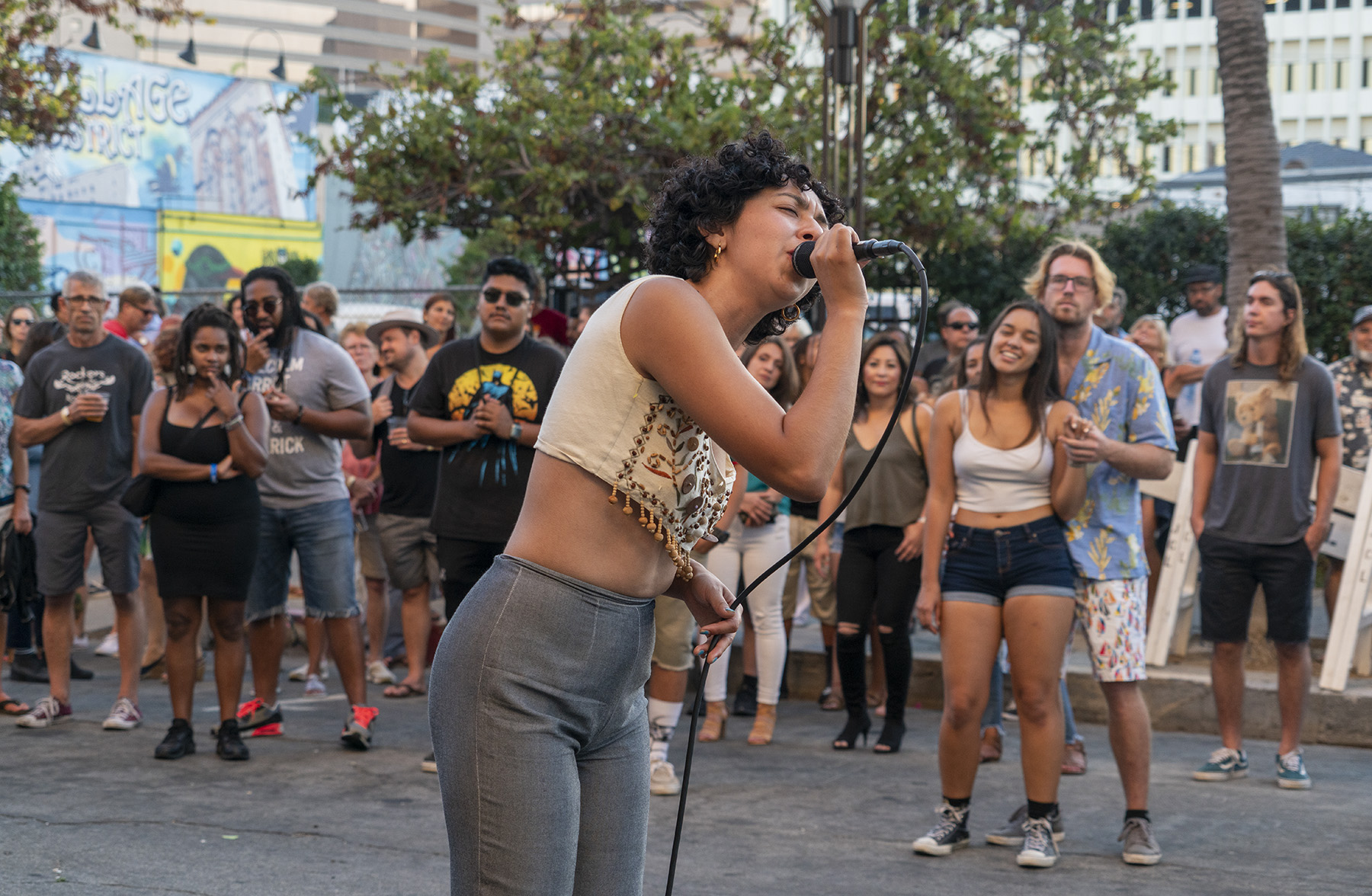 Gemma Castro serenades the crowd of spectators as she leaves the stage and gets close to the audience at the 11th annual Buskerfest in Downtown Long Beach Saturday, September 7, 2019. Photo by Gabriela Mungarro.

While acknowledging that any digital event would be a one-off placeholder, Foster also said if the group can pull together a successful digital event he would like to see it continue in the future as an extension of traditional SAM programming.

“There are opportunities here,” he said. “SAM has always been a celebration of Long Beach, not just of the music in the moment but the bigger collective. This could be a really nice showcase of Long Beach.”

The early success of SAM led to the creation of numerous downtown events, including the Downtown Long Beach Alliance’s “Live After 5” music series, featuring a free event every third Thursday at rotating locations. SAM was also the forerunner to non-music events such as Tastes of Downtown and the weeklong POW! WOW! mural festival. Coronavirus also claimed those events, this year.

“We could talk about a number of different events that have taken place in and around the downtown, but 12 years ago, none of that existed,” said Kraig Kojian, president and CEO of the alliance, which was integral in the development of SAM. “We enjoy bringing music to the downtown—it has helped downtown find its voice. I hope we’re able to [present] SAM in some way, shape or form. It would help bring the community back together. Music is a universal language and God knows we need that today.”