'I have no choice': Protesting during COVID • the Hi-lo
- ADVERTISEMENT -

Sheryl Bender, active in the protests as well as within the Black community both in Long Beach and Los Angeles, has stood in the streets throughout our county, surrounded each time by thousands of others, and acknowledged one glaringly obvious fact: She was putting herself at risk, that COVID is an “insidious disease” but that the disease will “eventually be in our rearview mirrors as treatment and finding a vaccine advance.

“Racism, on the other hand, and all of the atrocities inflicted on Black Americans as a result of it has been raging for the past 400 years and is still going strong,” the Long Beach resident said. “There are ways I can make myself safer to avoid contracting COVID, but nothing in the world will grant me immunity from racism. If I’m fighting for my life anyway, I’m focusing my energy on the more insidious evil. And so I protest. I have no choice.”

Protests are often met with criticism—Colin Kaepernick’s kneeling was called disrespectful to the flag, while Occupy Wall Street was dismissed as “folk politics,” where demonstrations become more habitual than solution-based. The current state of civil unrest is no different. 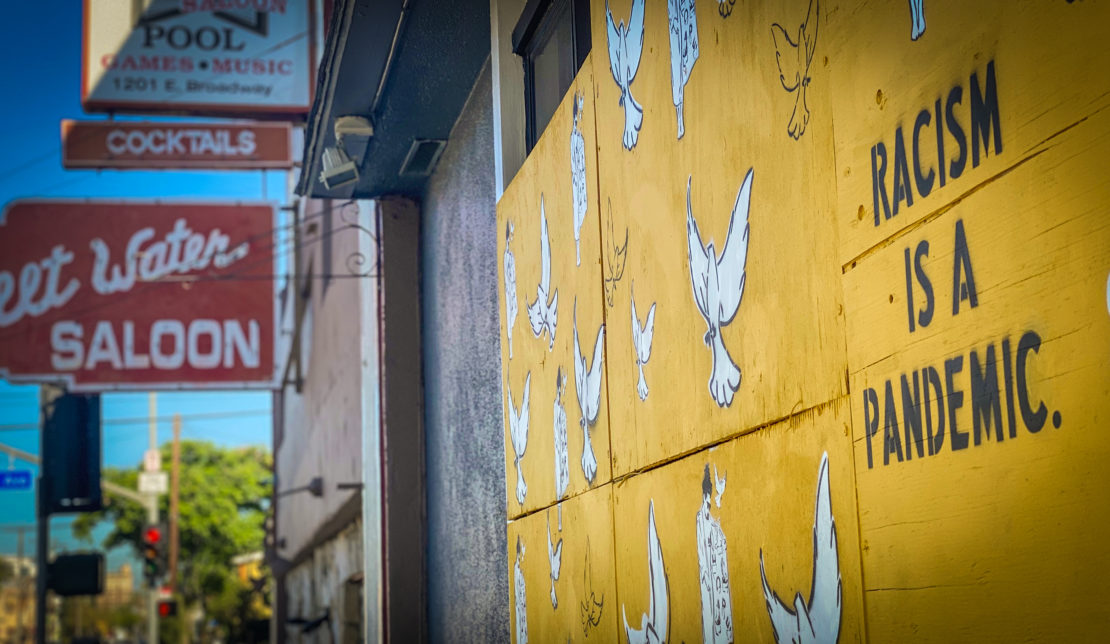 A mural by artists Corie Mattie on the boards covering the windows of the Sweet Water in Alamitos Beach. Photo by Brian Addison.

Hundreds of thousands, perhaps millions, of Americans have been outside, close together in crowds, protesting on matters of police abuse and racial inequity, two subjects that invite myriad viewpoints, including criticisms of the cause itself. But protesting during a global pandemic leads to an entirely different type of criticism, one that argues it’s irresponsible, no matter the cause, to be outside in large groups at a time when health officials have strongly advised against such behavior.

The COVID-19 pandemic gave Angelica Sampson a unique perspective as she was relegated to the confines of her home. Having lost both of her jobs, she, like many others, was forced to rest in a way that had been impossible beforehand. It was during that time, she says, that she found herself liberated from what she calls the “wage slave” part of her brain that hindered her from being more vocal in the fight for racial justice.

“The pandemic really helped me reset my trajectory, like I’ve never had a strong sense of purpose, but I do now,” said Sampson, a Long Beach native. “I’ve always used my voice to educate those around me, but showing up to protests was something I was too scared to do before this. This [pandemic caused me] to tell myself, ‘Enough is enough. I am not gonna sit on my ass anymore.’ I recently realized that I think the best way I can make a difference is to get involved in local politics. It’s not something I can achieve overnight, but I have a sense of clarity I’ve never actually had before and I attribute it to the amount of sleep I’ve been able to get since I got furloughed.”

With this newfound commitment, Sampson found herself in the streets, among thousands of mask-wearing protesters on May 31, the inaugural Long Beach protest against police brutality. It invigorated her to such an extent that she knew she couldn’t be anywhere else, even as it presented her with the very real possibility of contracting a virus that has killed more than  100,000 Americans. 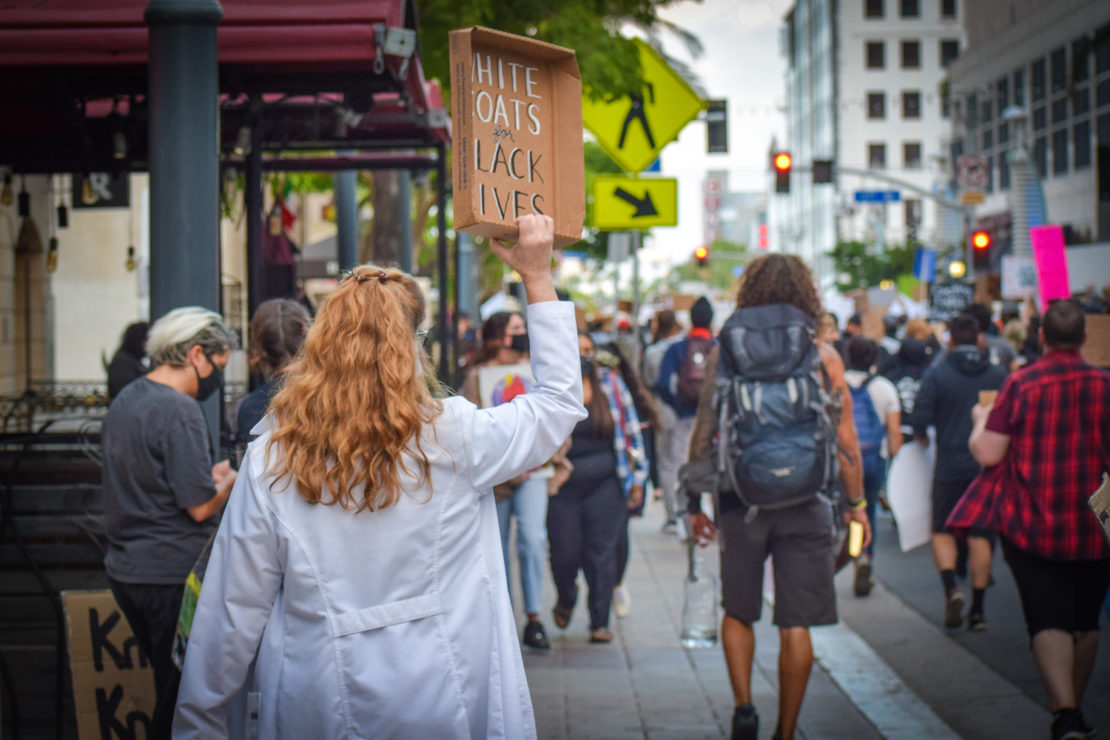 “Black bodies were dropping long before the pandemic,” she said. “Shelter-in-place orders allowed many of us working-class people the luxury of rest, we used that rest to really consider what’s important about being alive. That’s why I can’t just hide in my house and wait for a vaccine. I’m 26 years old and I don’t think I’ll ever feel safe enough to start a family because police brutality and systemic racism have spoiled that simple joy. I cannot bring myself to have babies I cannot protect.”

Sampson, who has been protesting every chance possible, says she is concerned about catching and spreading the virus but notes the many people, including herself, who risked contracting illness by voting in  March, yet faced little criticism for it. She sees that as a  gross contradiction given the growing criticism of those gathering for protests when racism and hatred are “concurrent threats… equally deadly to millions of Black people, Brown people, LBGTQ folks, and indigenous people.”

Perhaps surprisingly, many health professionals are not only sympathetic but outright supportive of the actions of people like Sampson. Dr. Anissa Davis, public health officer for Long Beach, noted in an interview with the Post that it is impossible to “disentangle COVID-19 and the protests against racial injustice” because the two are “interconnected. When we’re fighting racial injustice, we’re also fighting COVID-19,” referring to the racial disparities within the COVID pandemic, which has disproportionately affected Black and other communities of color. 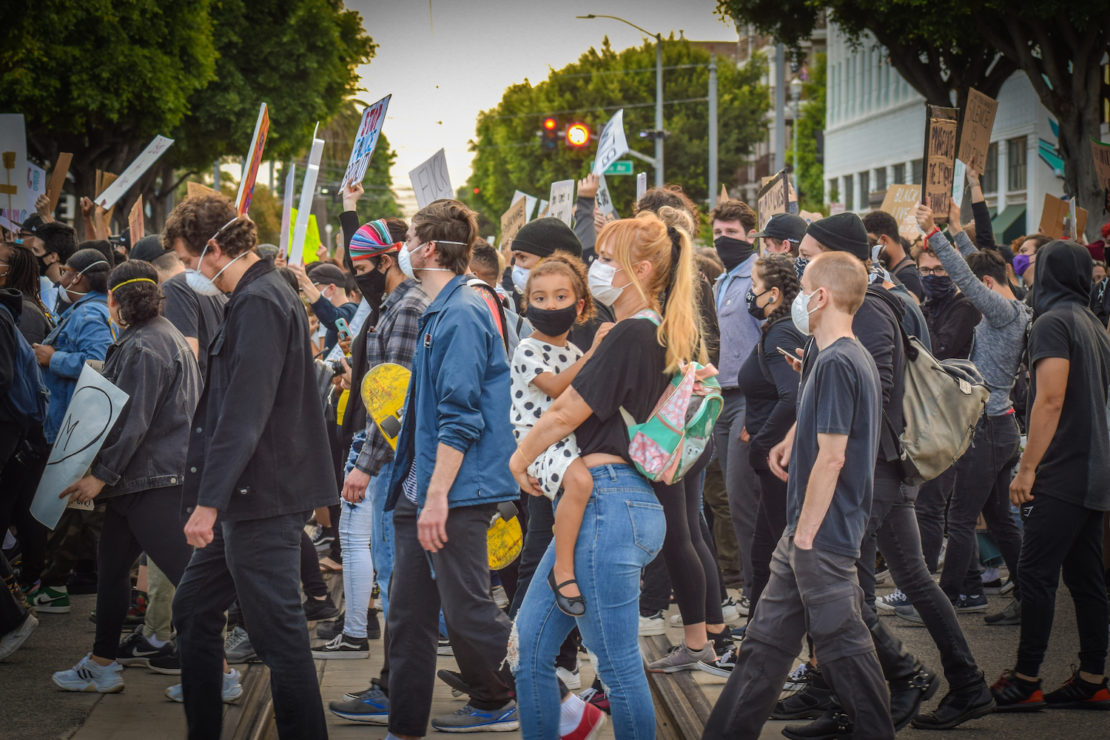 Protesters, including little ones, rally along Pine Avenue in Long Beach on Friday, June 5, 2020. Photo by Brian Addison.

Other health professionals in the growing “White Coats for Black Lives” sub-movement, agree with Davis, echoing a chorus of public health officials in the U.S. that’s saying systemic racism qualifies as a public health concern. The stress and trauma “Black people have been going through our whole, entire lives,” Davis said, affects their mental, physical and spiritual health, contributing to a lowered quality of life.

Those stresses can be measured tangibly: lack of access to quality healthcare, compounded by the fact that many Blacks—as well as other people of color and marginalized groups such as the LGBTQ community—are frontline workers, with low-paying jobs and dependence on public transit.

“Listen, I am a 29-year-old queer person of mixed heritage,” said Chris Covington, who has been protesting nearly every day since demonstrations began. “I was compelled to put my health at risk to bring attention to the pandemic that has pledged our society for hundreds of years: white supremacy. Racism is just as much a pandemic as is COVID. For the past 11 years, I have dedicated my life to organizing my community and other marginalized communities to fight for the rights, policy change and culture shifts we demand. One of those demands is to create an equitable future where all people’s needs are met and life expectancies shift for the better.”