Sushi with the boys: My first time eating the popular Japanese cuisine • the Hi-lo
- ADVERTISEMENT -

Confession: I am a 33-year-old Long Beach native who had never eaten sushi until this weekend. There, I said it. When I made the announcement to my colleagues in the newsroom, the reactions ranged from incredulous to shocked—probably some mild judgment but they didn’t vocalize that. But I rectified that intentional oversight in glutenous fashion at an all-you-can-eat sushi joint in Huntington Beach over the weekend.

Some history. As a youngster, I was a picky eater. Not as picky as some kids, like one person I know who to this day refuses to eat fruits and vegetables. Maybe picky isn’t even the right word. Stubborn. Once I made up my mind on a food, that was it. As a kid, I never liked fish. Any kind of fish. The logic was simple: If I don’t like cooked fish, why would I like raw fish?

Now, as a Long Beach townie, why did I venture across the Orange Curtain for my first sushi extravaganza? Because I’m new and it’s my friends’ go-to spot. Why all you can eat and not a nice, high-end establishment? Because I wanted to sample as much as possible, not order full plates.

With my dark secret laid bare for the universe, it should be clear to everyone that I am no food writer nor am I even a casual amateur foodie. So, reader beware, if you are looking for thoughtful insights into Japanese cuisine, you certainly won’t find them here.

Anyway, here is how the night went:

Finally, we were seated. With our first-round food order placed, the next order of business was drinks: a bottle of Sapporo and a round of hot sake. 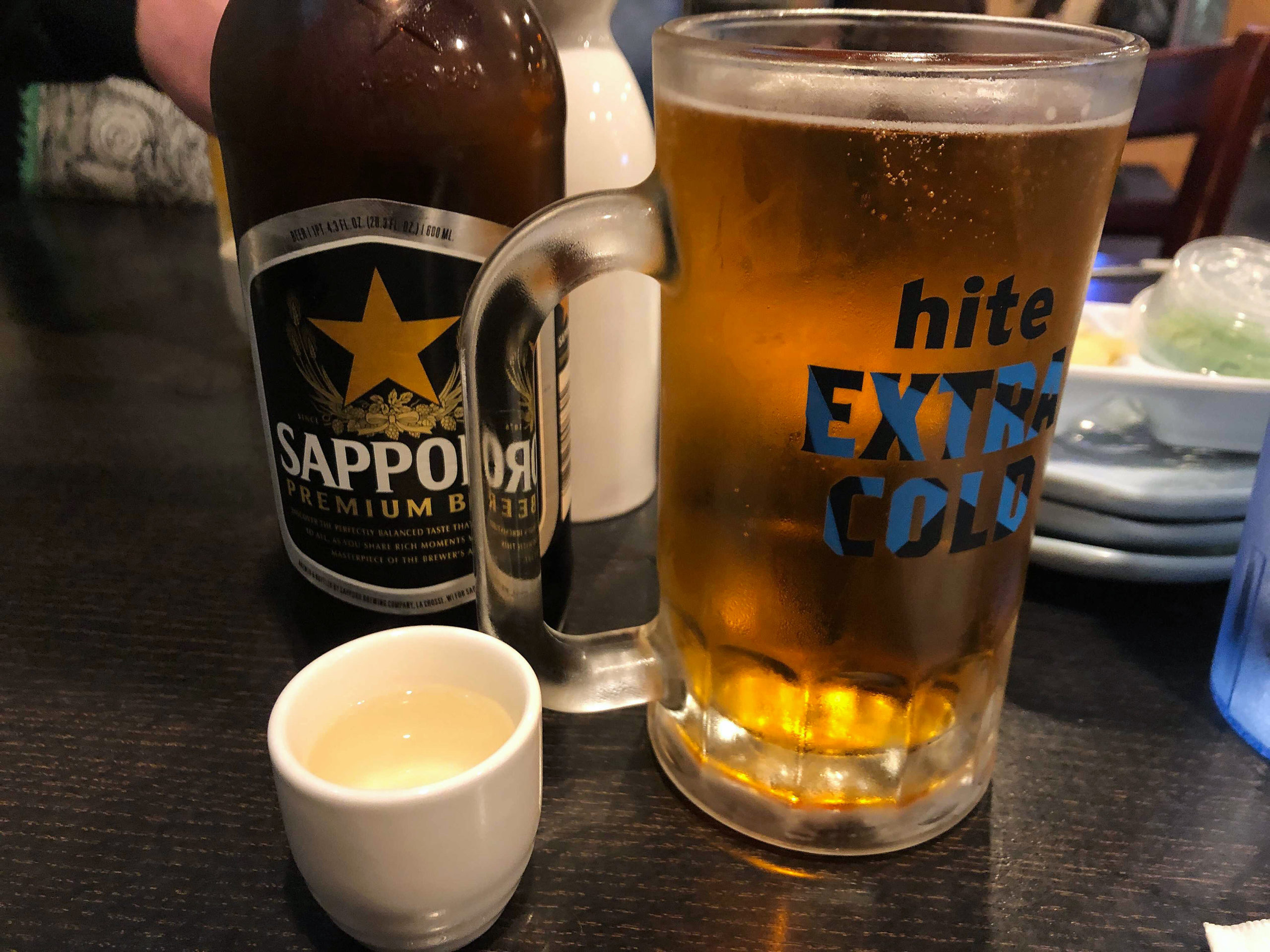 The first sushi roll I sampled, appropriately named for a lifelong SoCal guy, was the In-N-Out Spicy (avocado, spicy crabmeat, cucumber, shrimp tempura, ebi shrimp, crunch). My first bite was hard to get down. Not because I disliked the roll but rather the amount of food I put in my mouth at once was absurd. It was an end piece but I threw caution to the wind and shoveled it in. Also, it was a little fishy, so that could be another reason.

But I got it all down and moved onto the next roll: the Ex-Boyfriend (spicy crabmeat, shrimp tempura, soy paper, salmon, albacore). By this point, you would probably assume that I hated it. But you’d be wrong. I actually found this roll fairly enjoyable. It wouldn’t make any of my top-food lists but it was good. As was its counterpart and my next roll, the Ex-Girlfriend (crabmeat, spicy tuna, soy paper, tuna, yellow tail, salmon).

“You seem like you’re enjoying yourself,” said Seth. And he was right. 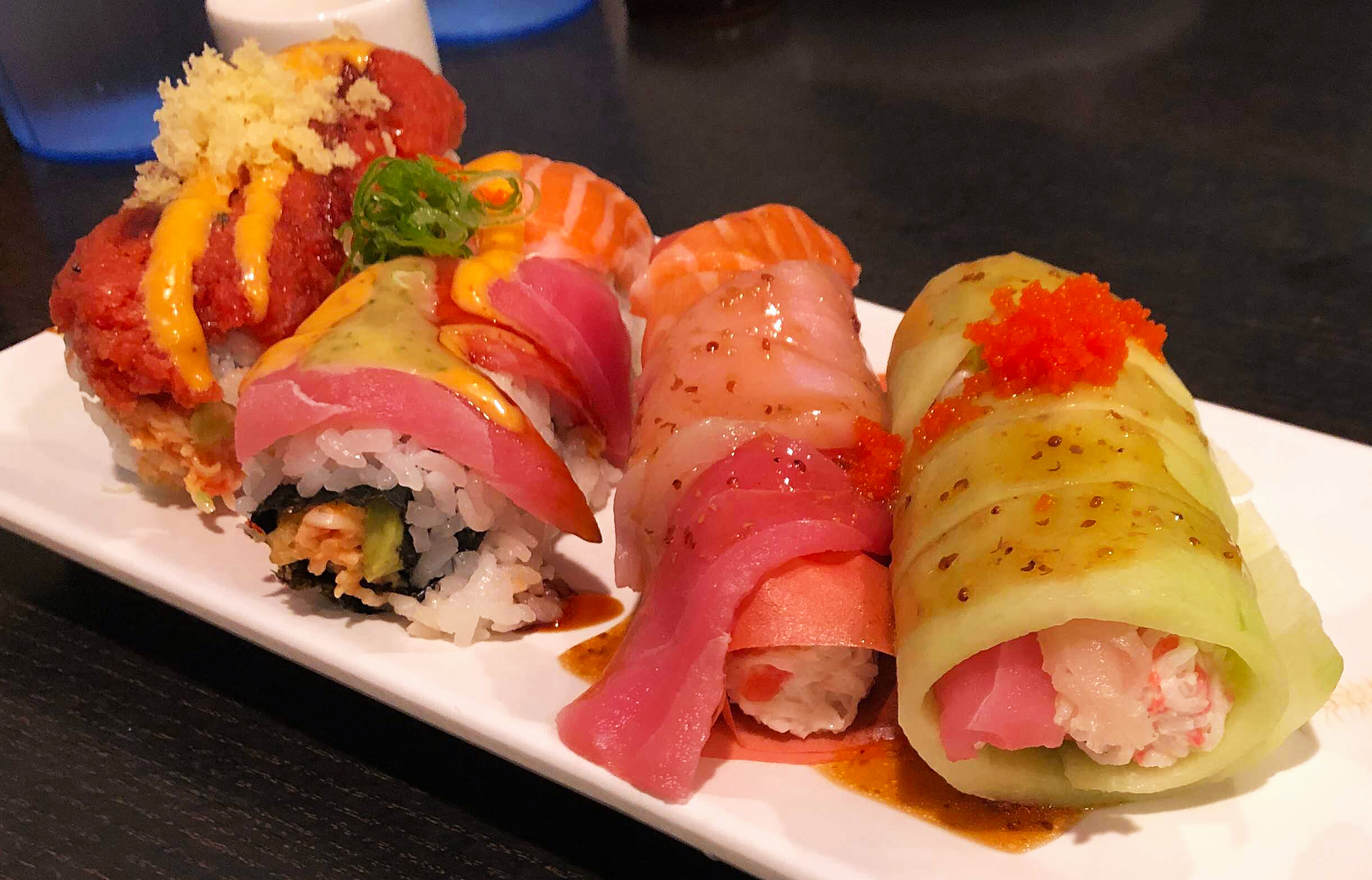 Up next was the Sexy roll (avocado, crabmeat, tuna, albacore, salmon, cucumber wrap). I did not quite enjoy this one as much as the two previous but it wasn’t so bad. Probably wouldn’t order it for myself but would pick it off a friend’s plate if they weren’t going to finish.

With three out of four rolls in the “I could eat this again” column, I was feeling confident. But also starting to feel the effects of the sake.

Now, I’m not the biggest fan of overly spicy foods. I do enjoy some heat from time to time but, turns out, spicy sushi is not the move for me. So I was wary of the Caliente roll (spicy tuna, cucumber, spicy crabmeat, jalapeno, cilantro) but ignored my better judgment and popped it in my mouth. Not sure if it was the flavors or the spice or the texture or all three but this roll did not agree with my tastebuds. But I got it down and moved on.

Next up was the LA Dodgers roll (spicy tuna, cucumber, spicy crabmeat, eel tempura). I got another large end piece. Having learned from the first roll, I took this in slow, in two separate bites. The first bite consisted mostly of the fried eel and rice, which I was a big fan of. The second bite on the other hand—maybe I reached sensory overload or maybe the sake was catching up to me—did not sit well.

But I powered through.

Later, the night took a dark turn. With the effects of the Dodgers roll still lingering, I moved on to the Volcano roll (avocado, crabmeat, salmon, baked). On paper, based on the rolls I did like, I should have enjoyed this one. But no luck. Maybe with another attempt in the future, this roll wouldn’t be so bad.

I think my body was just over it, done with the experiment. However, I wasn’t done.

Prior to my excursion, I told my colleagues at the Post my plan. Through subsequent conversations, I ended up promising reporter Kelly Puente that I would try at least one of the more “hardcore” items on the menu. Enter: Smelt Eggs.

Commonly known as masago around sushi joints, the item consists of the edible eggs of the capelin fish and rice wrapped in seaweed. As I’m sure you can surmise, this did not go well for me. It was the culmination of every mental roadblock that kept me from trying sushi in the first place. They tasted exactly like what I imagined fish eggs to taste like, in the worst way possible.

Of all the items I ate that night, the fish eggs was the only dish I could not get through. I spit it out in my napkin and never looked back.

Here I am super-not-enjoying smelt eggs during my first sushi experience. pic.twitter.com/MRWbbVJbph

“You looked unhappy,” Seth recalled of my smelt experience after our meal. “You had a face full of regret. It did not make you eel very good.”

“You just kinda looked like how the word smelt sounds,” Zack chimed in.

It took a not-small pull of beer to wash the taste out of my mouth.

An employee swung by and cleared our empty—and not empty—plates. I quickly realized my order of unagi (freshwater eel) was gone. Fortunately, it was part of the all-you-can-eat menu, so I put in another order and it was out in no time.

I picked up the eel, threw it in my mouth with a silent prayer and…it was delightful. I truly enjoyed it. After everything leading up to this moment, I was taken aback by how much I enjoyed it, actually.

The unagi came with two pieces and I quickly ate the second. 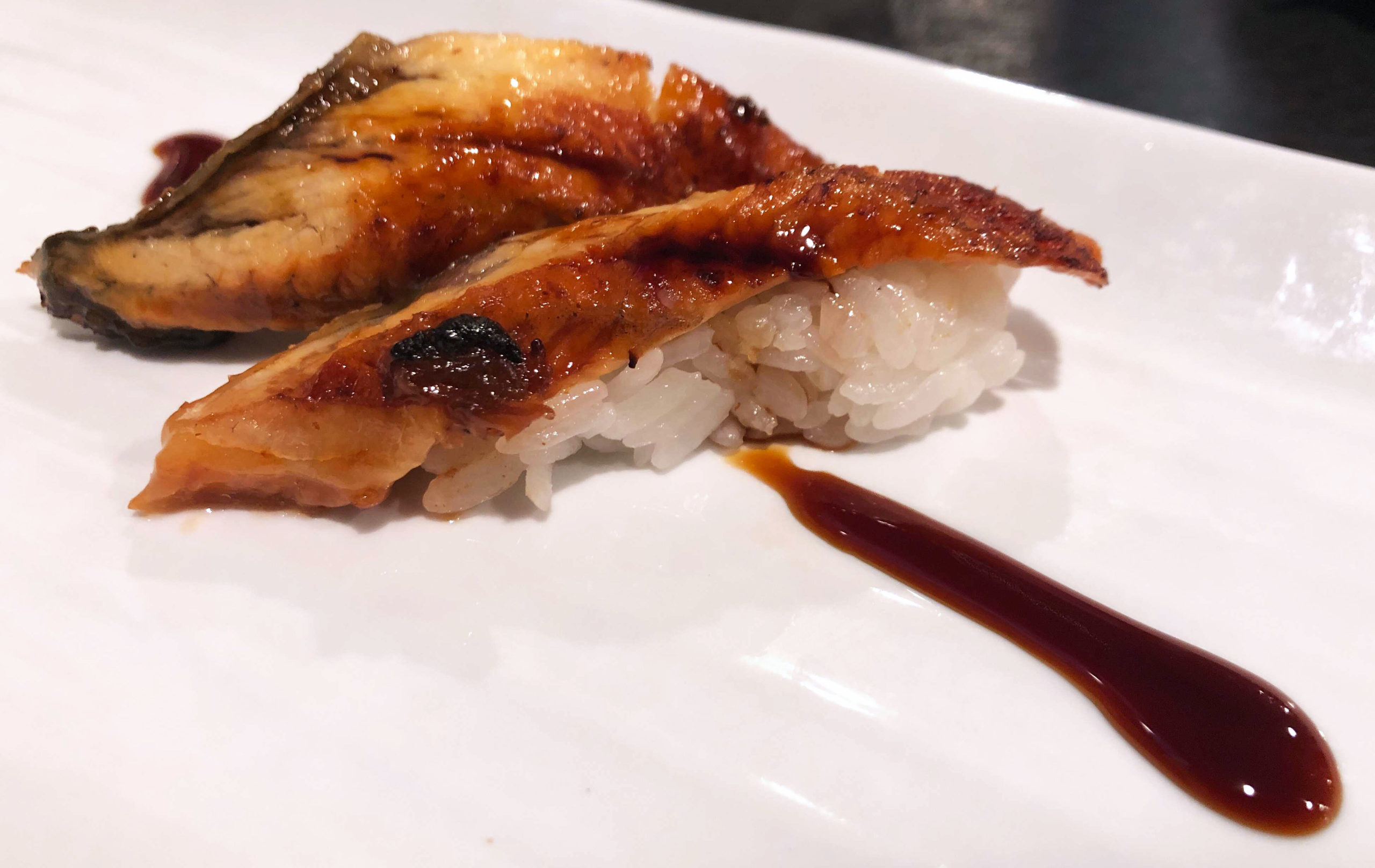 Seth and Zack had ordered a few other rolls but I opted out of those, feeling that I had already put in a valiant effort for a first attempt.

A slight sake-and-beer-induced grogginess Saturday morning and a $180 tab (with tip) notwithstanding, I would say the evening was a rousing success—not because I was a fan of every item I tried but because I had a great and entertaining night with the boys.

At the end of the night, Seth asked me to rate my first sushi experience.

“Experience on the whole, absolutely 10 out of 10, sushi with the boys, didn’t even have to like it all for it to be a great experience,” I replied.

Moral of the story, sushi did not gain a die-hard fan out of the experience but there are items I would definitely eat again and others I still want to try, so I can certainly enjoy the occasional sushi night, you know, when I feel like my bank account is looking a bit too fat on this journalism salary.