As a boy, Johnny Chhom remembers snacking on sugarcane. His mother grew a small patch of the grass at their home in Long Beach and would cut stalks for Chhom to chew on. For him, it was a sweet treat and for his mother, a reminder of her home in Cambodia.

It wasn’t until June 2020, fresh off the heels of a pandemic-related layoff, that Chhom realized an opportunity to share that nostalgic piece of his culture to the masses and launched Sweet Grass Sugarcane Juice, first as a business out of his apartment then a mobile food truck serving up fresh-pressed sugarcane juice. Now, the 33-year-old business owner is only days away from opening his first brick-and-mortar on the outskirts of Bixby Knolls.

“A lot of blood, sweat and tears went into this place,” Chhom said while standing in his juice bar. “I never thought I’d be doing this.”

Taking over what was formerly H Salt Fish & Chips, the newly renovated interior of Sweet Grass’s 1,000-square-foot-space feels like a cross between a brewery and a coffee shop.

The floors are concrete. Rich wood accents line walls and tabletops. Black painted ceilings contrast white walls, countertops and a tiled backsplash. On the right side of the building are a collection of potted house plants and a neon sign with the business logo hung against a grass AstroTurf accent wall.

Chhom said the space was designed to emulate the look of his former food truck, an ode to the early days when he’d park outside of Ten Mile Brewing. Placed on the serving counter next to the register is a miniature replica of the food truck Chhom had made to remind him of his journey. 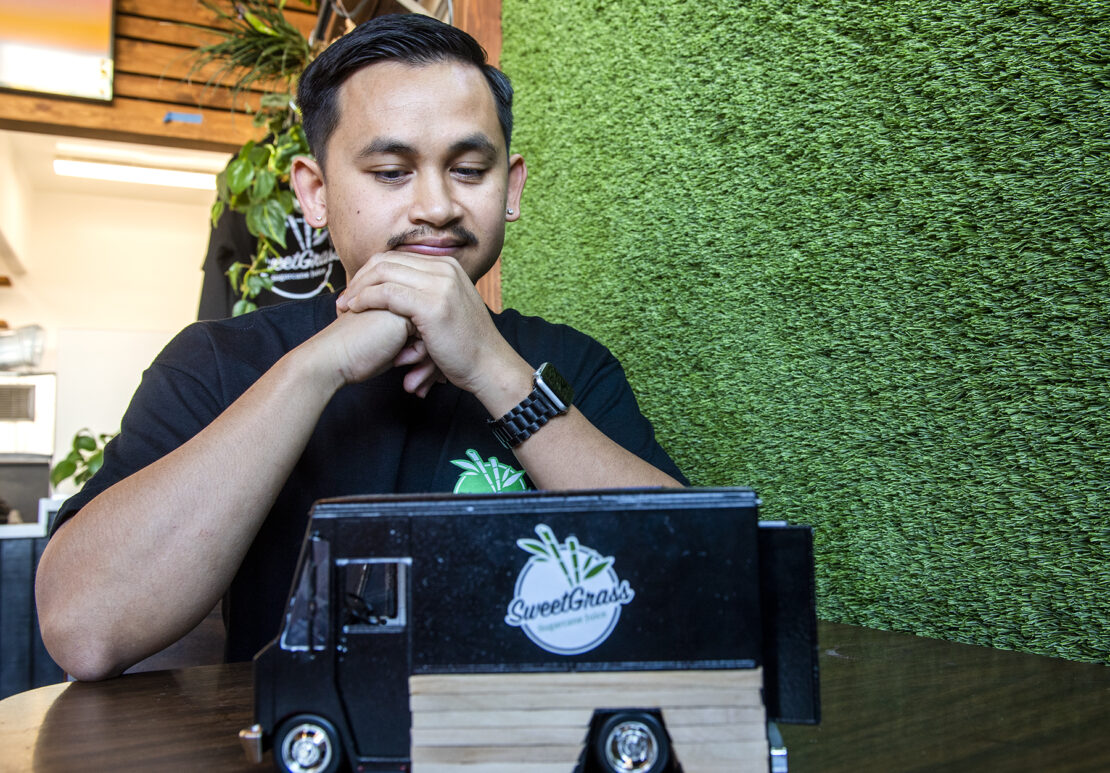 Johnny Chhom who started out of a truck now moves into his first brick-and-mortar, Sweet Grass, a sugarcane juice bar in Long Beach Tuesday, Nov. 23, 2021. Photo by Thomas R. Cordova.

Sweet Grass is set to open Saturday, Dec. 4. The grand opening celebration at 1 p.m. will include free samples, a ribbon cutting ceremony, a live DJ, and appearances from local business figures, including Blair Cohn of the Bixby Knolls Business Improvement Association.

Chhom described feelings of elation and some anxiety about launching this phase of his business. Though he had been ready to open this summer, supply chain backlog at the port meant his stalks of sugarcane were held hostage, ship-locked in a freezer container along the coast. For months he didn’t have the product he needed to stock the new shop or his truck. His only source of income was his Sunday pop-up at Smorgasburg market in Los Angeles, where he got by on a few reserves of sugarcane he had squirreled away.

Now, with his stalks of Southeast Asian sugarcane finally in his grip, he’s primed to supply Long Beach with his cold-pressed concoctions.

There’s great variety, 14 options patrons can choose from. The original flavor is pure sugarcane, pressed fresh with an industrial grade cold-press proprietary juicer where the bamboo-like stalk is inserted through a spout at the top. As it glides through the shiny chrome machine, emitting a crunchy rumble, a milky golden-green mixture funnels out the bottom into a 20-ounce cup filled with ice. 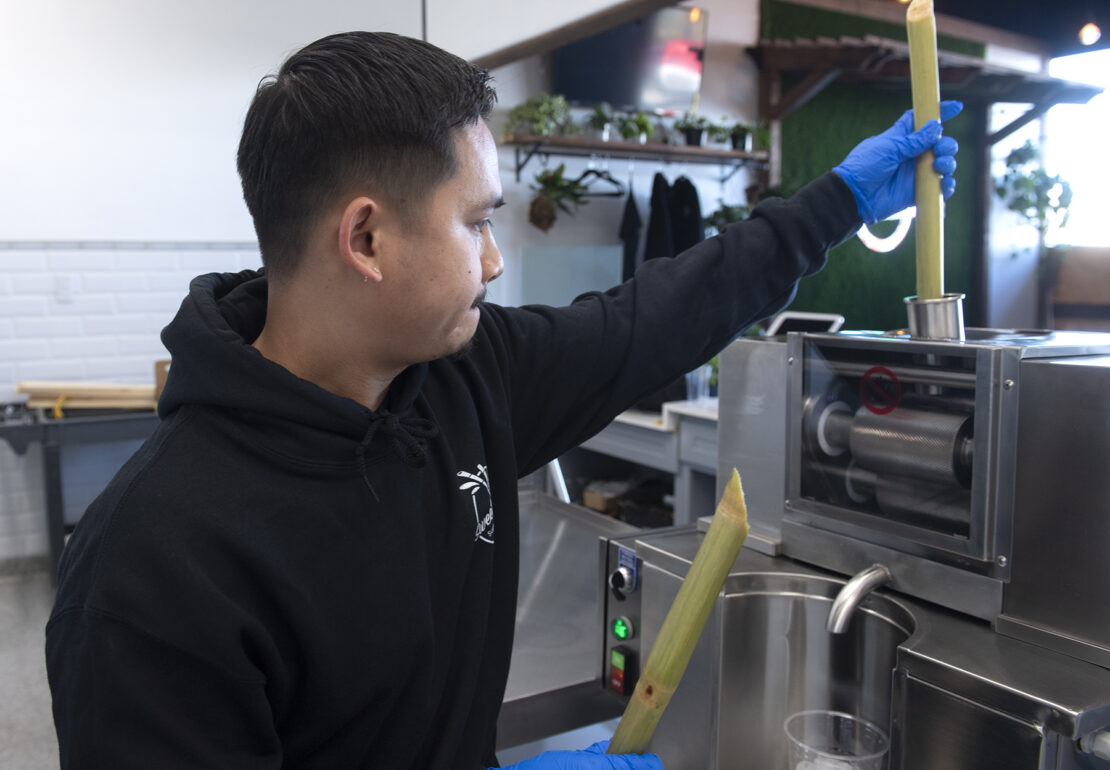 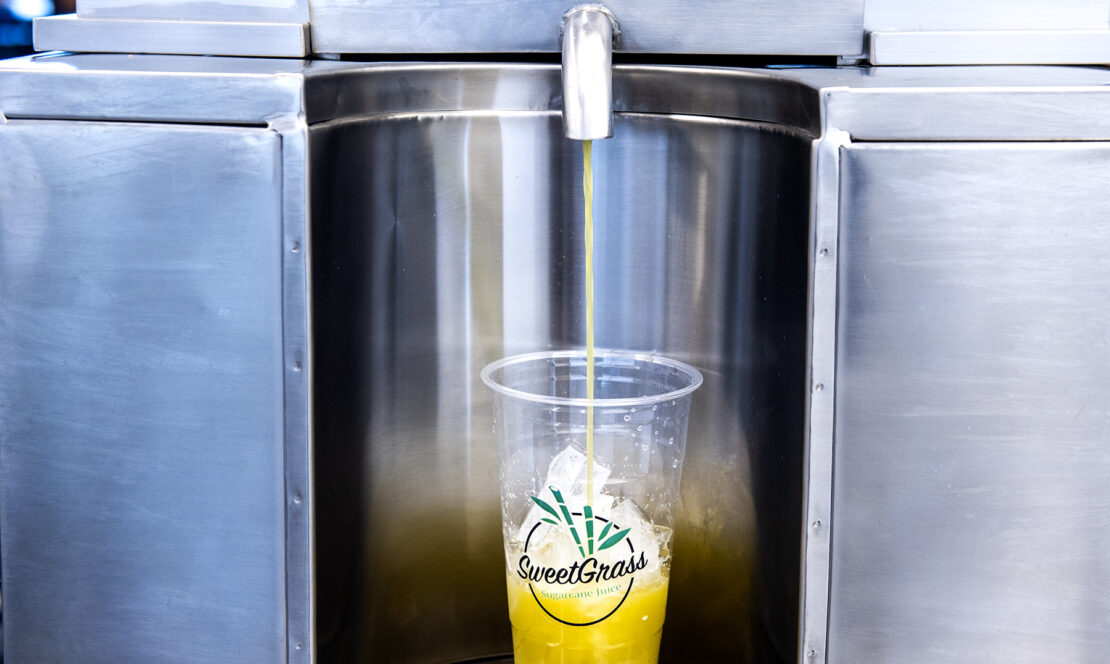 For his fusion flavors, Chhom leaves room at the top to layer bits of concentrated fruit. There are traditional flavors, such as strawberry, watermelon and pineapple. Other flavors feature exotic fruits such as dragon fruit, passionfruit and calamansi, which is a tart orange-like citrus predominately cultivated in the Philippines.

The most popular flavor, Chhom said, is the coconut cane, made with sugarcane and Thai coconuts, which are considered the highest grade and most popular coconut on the market for its unparalleled sweetness. Chhom hand cracks each coconut for the juice and scrapes the sweet meat to be used as a chewy floater in the drink.

“They are the best coconuts in the world,” Chhom said.

In the SoCal beverage landscape Chhom believes he’s found a yet-untapped niche market. Though sugarcane juice is a ubiquitous street drink in Southeast Asia, where the tall grass grows natively, in the U.S. the trend hasn’t quite invaded the mainstream consumer psyche, overshadowed by its coffee, milk tea and boba competitors.

“Sugarcane has been growing on this planet since the beginning of time,” Chhom said. “And this is something that many people haven’t tried yet…. it’s something that could be re-innovated in today’s climate.”

Chhom has designed his brand to hit that social media marketing sweet spot. The brand has a clean, contemporary look. The drinks are bright and multicolored—ideal for Instagram. And sugarcane juice is a beverage that falls under a healthier designation. It’s vegan, gluten-free and as a natural, unprocessed sugar is high in fiber, electrolytes and antioxidants. The drink itself is remarkably refreshing. It’s sweet, but not sickly, with grassy notes reminiscent of a wheatgrass shot sans the bitterness.

And as the first sugarcane juice business in Long Beach, Sweet Grass will be convenient, saving patrons a 30-minute drive to Los Angeles or Orange County to snag a sweet sip. 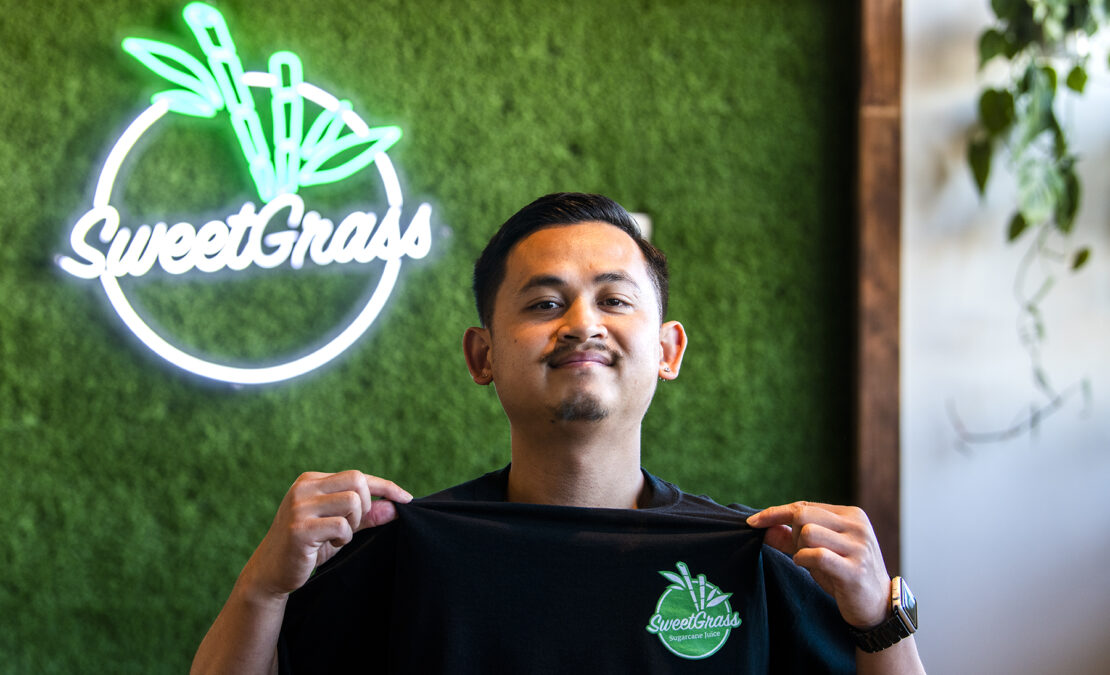 It’s been a whirlwind reaching this point, Chhom admitted, a journey he refers to as a “meteoric rise,” but was not without its challenges.

Chhom’s early years were sometimes a struggle. His mother, who emigrated from Phnom Penh, Cambodia to Long Beach in the early 1980s as a refugee from the Khmer Rouge, worked odd jobs to help support the family, but it kept her from being at home.

“I got raised by the streets, I learned on my own. I was always a talented person; I just didn’t have much guidance,” the Poly High School graduate said.

Chhom describes growing up with “a chip on my shoulder,” a feeling he carried with him into adulthood working odd jobs. At his last gig, he worked in risk management at Northwestern Mutual in Downtown, a career he thought he would be in for years until the pandemic shut it all down.

“I kind of hit rock bottom and was in a depressed state,” Chhom said. “I was either going to fight it or not, so I completely changed my mindset.”

It was while visiting sugarcane juice shop, Cococane, in Orange County that Chhom said the idea struck him.

“I went over there one time and there’s a little lady pressing the sugarcane, she’s doing it by herself, maybe like one or two other workers, and they had a line over there,” he recalled. “I was like, I’m going to re-innovate this concept and just revamp it and make it more modern. And not only that, I’m going to utilize social media.”

Chhom began preparing the sugarcane juice from his apartment and delivered it to people, “guerilla-style marketing” as he called it. After a few months he was able to purchase a food truck and debuted at Ten Mile Brewing.

“The first day we opened, it was just madness. It was like the whole parking lot was filled. And the streets were filled out. There was all types of people in the parking lot,” he said.

Working seven days a week he “grinded and grinded, hustled and hustled,” to the point where he said he was suffering from mental breakdowns out of sheer exhaustion. But, it paid off, and within a year he had the keys to his first shop.

“A lot of the stuff that I do, and a lot of why I have hustled so hard is because of the hard life that my parents and my grandparents endured to get to America,” he said. “I just wanted to demonstrate my ability to solve problems and overcome obstacles, I want people to do the same.”

Still, Chhom said he’s grateful to his community for supporting him. And with his juice bar, he said he plans to create space and use his platform to give back, be it through community outreach, fundraising, or simply by inviting small businesses to sell wares in his shop.

In December 2020, Chhom raised $2,000 to help pay for a new playground for The Muse Academy in Long Beach, which serves young low-income children as well as foster children.

“I wouldn’t be in my position today, if I didn’t have so much support from people that come by, tip me and buy drinks and do all this stuff, you know…..there’s this African proverb that still really rings strong with me, they say if you want to go fast, go alone but if you want to go far, go together.”

Editors Note: This story was updated with information about free samples that will be handed out during the business’s grand opening.