'That ladder that we didn't have': Art Realm collective reflects on 3 years of supporting emerging artists of color • the Hi-lo
- ADVERTISEMENT -

The first show artist and Long Beach native Brandie Davison put on, the featured artist canceled last minute. Running back and forth, cleaning up spills and working the door, ushering an overscheduled list of musical acts to perform back-to-back and knowing that the gallery walls of what was then the Art Exchange, were much emptier than they should have been, despite all that, Davison saw the silver lining.

“I didn’t know what I was doing, but I jumped in headfirst,” she said. “There were so many people, that was when I realized, OK, I’m not the only one that wants this.”

Aside from curating that first show, about six years ago, at Art Exchange—which eventually became the Long Beach Museum of Art’s downtown extension—Davison said she would often feel uncomfortable in other local art spaces, either because she was the youngest person or the only person of color. Feeling like an outsider, Davison began to envision a plan of her own. 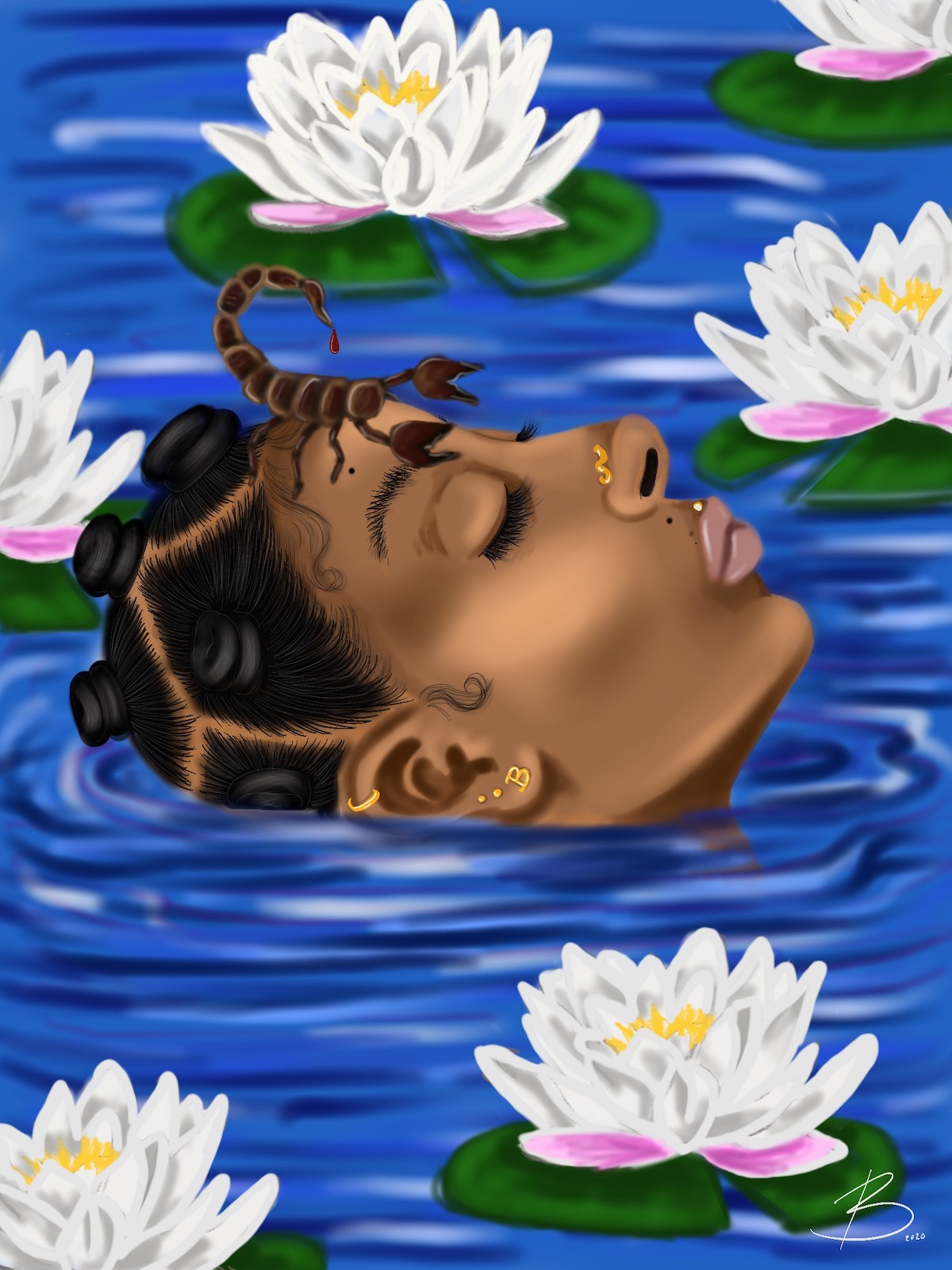 “It was frustrating to not have a continuous space to go in to, to find dope artists who were our age, people of color specifically,” Davison said. “All of the installs I would see that were in relation to people of color were about their experience of being a person of color, and not just their creativity and just their art.”

Inspired by her friend Dez Yusuf of local punk rap outfit CRIMEWAVE 5150, she noticed the band was able to carve out a space in Long Beach, graduating from playing house shows to solidifying bookings at local venues while fostering a diverse, young community, making her think: “There’s no reason why we can’t do what they’re doing with music, with visual art.”

“I just wanted to put on a show where we heard music that we liked to listen to, where we could see artists who we know who are really talented in a more traditional gallery setting, but still not so rigid that we don’t feel comfortable in the space enough to have conversations and talk and just be ourselves. 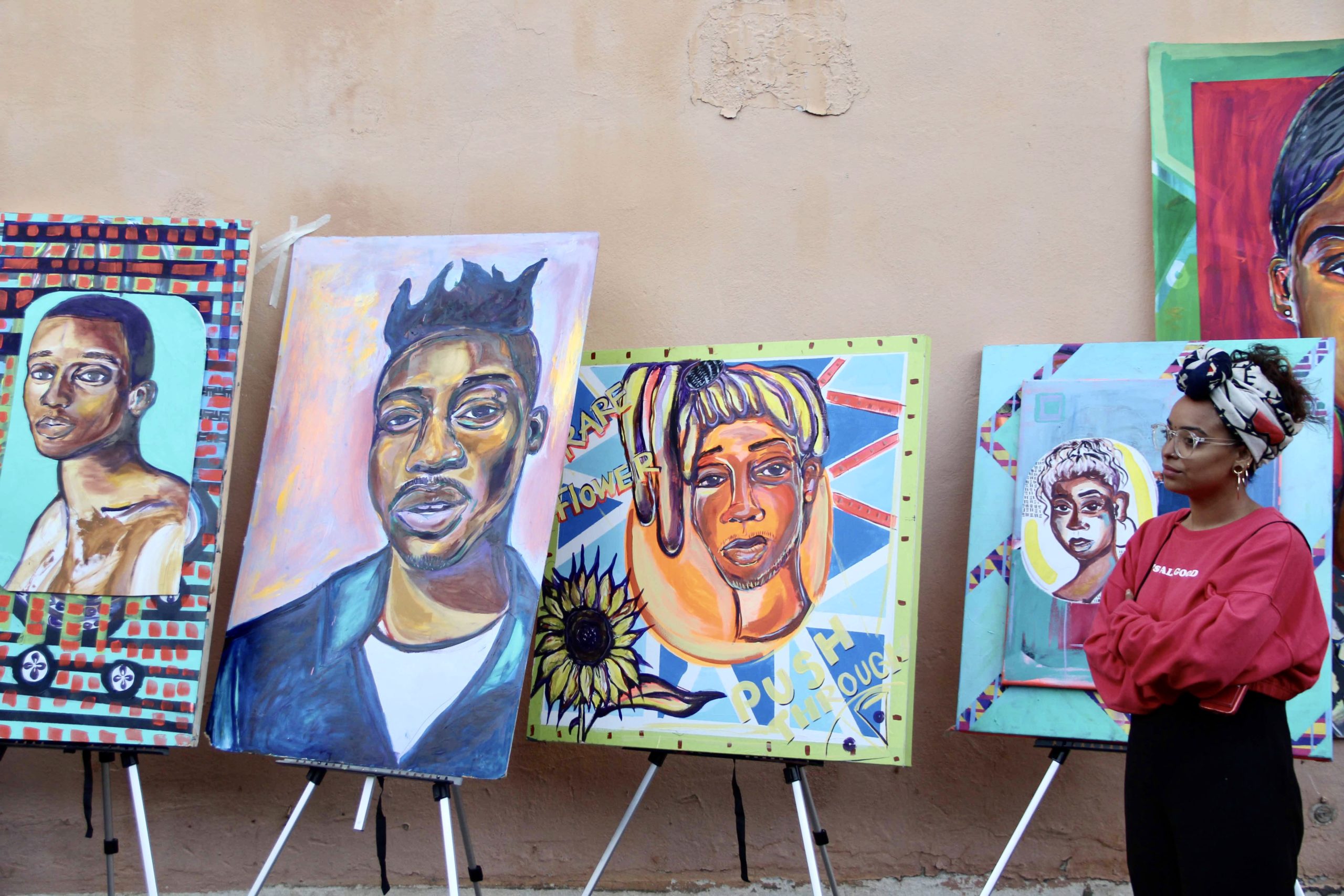 Photo from a past Art Realm event. Courtesy Brandie Davison

“And I think it was important that we prioritize artists of color because that was who I wasn’t seeing in other spaces. That was the vision, just to put on a show, and everything grew from that point.”

About a year and a half later, Davison launched Art Realm in the summer of 2017. And now, three years later, she and the collective’s work has snowballed into a tight-knit community of emerging artists, ranging from filmmakers to painters, sculptors to zine-makers, that make up one of the city’s most visible groups of visual artists.

Before the pandemic, the group was putting on quarterly shows at venues throughout Long Beach, including collaborative events with the Arts Council for Long Beach at the East Village Arts Park, and during LB Art Walk, garnering support from cultural hubs such as Play Nice LBC and businesses such as Hops & Vines, to most recently, several murals painted on boarded-up businesses throughout Downtown. 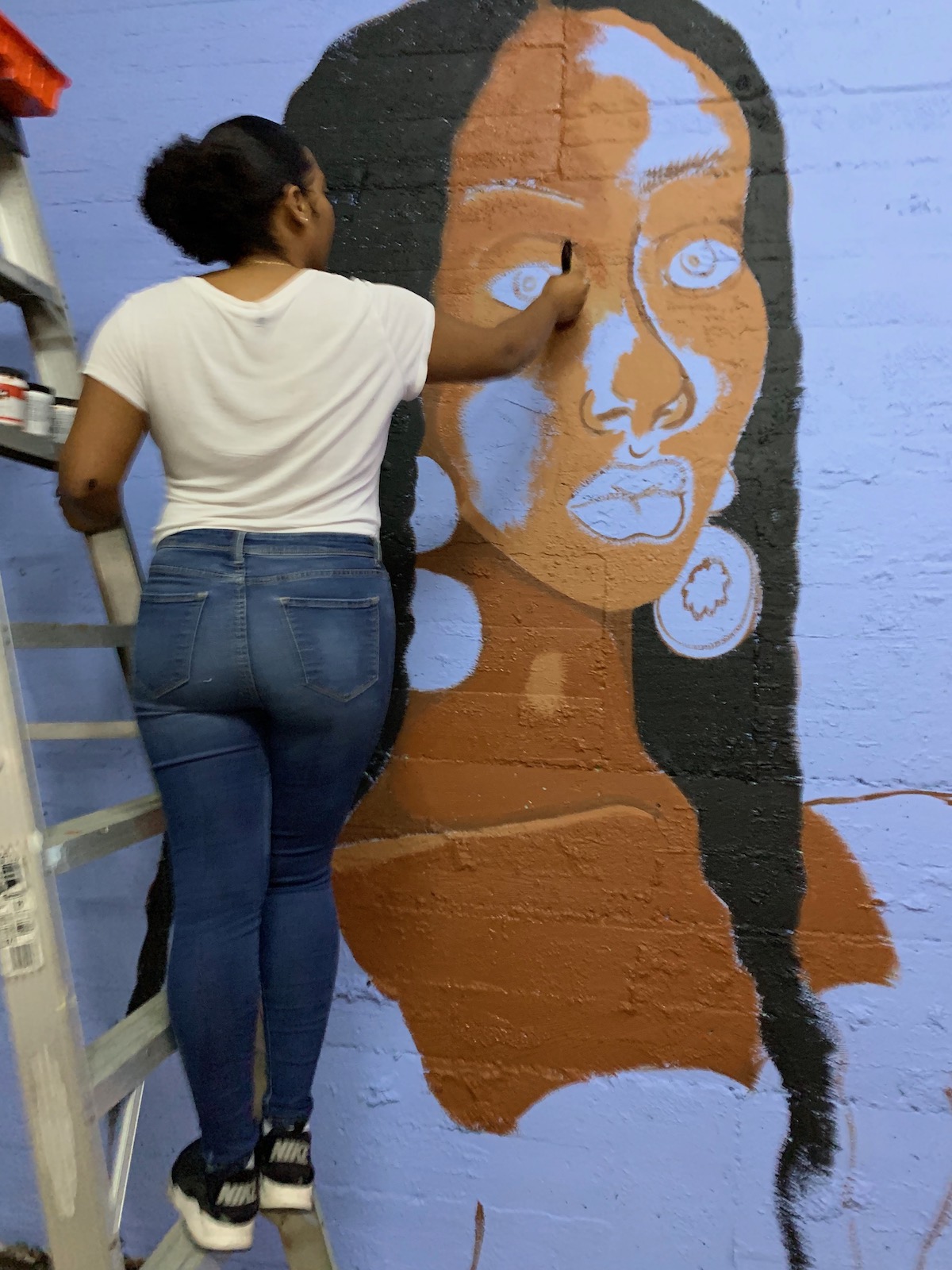 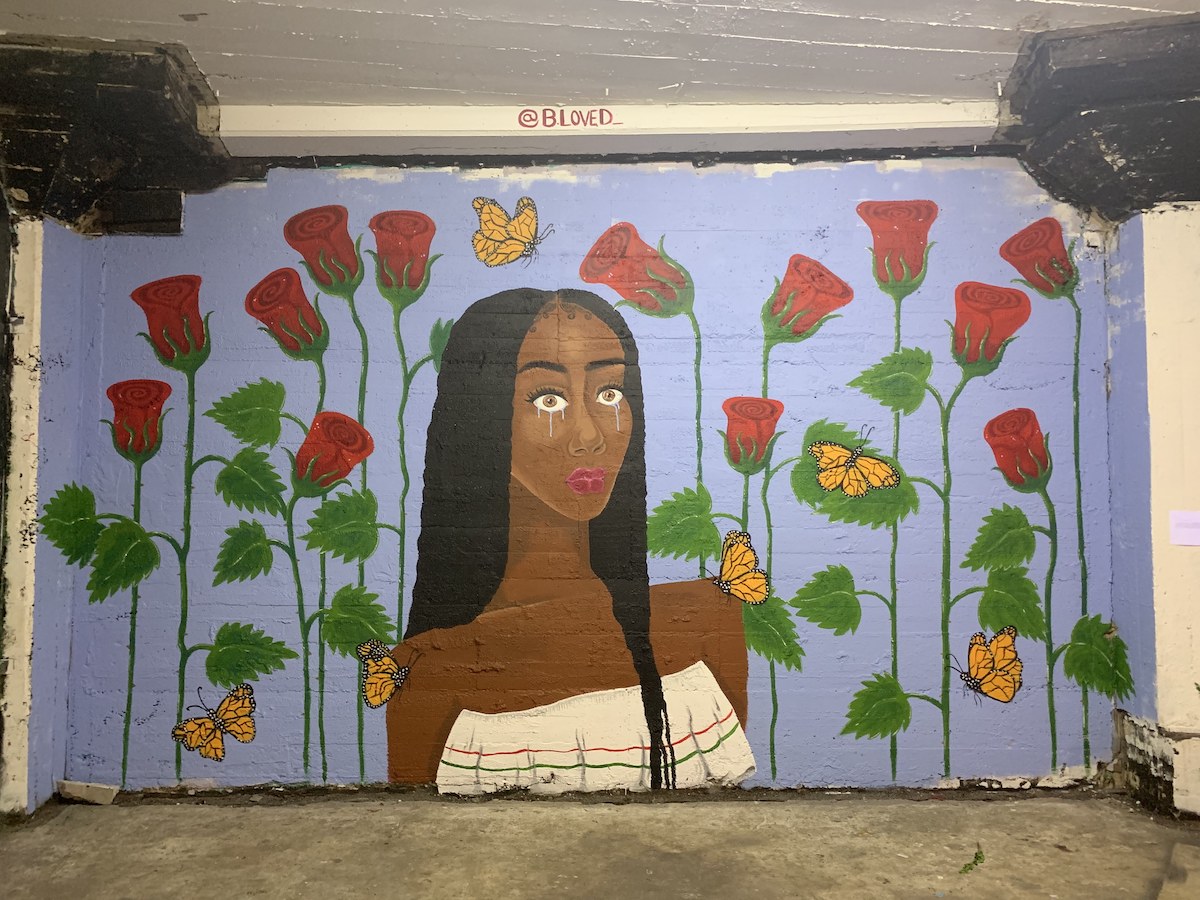 The first Art Realm was free, in fact, Art Realm shows are always free, and was purposefully held at a space, Hellada Gallery on Linden Avenue, that she didn’t think her circle or people in her community would know about, as a way of introducing them to something new.

“I want everyone to be able to come and be able to see people that look like them that are just out here creating just to create,” Davison said. “I didn’t know what I was doing then, I still don’t, but that was the concept, just to be open and for people to just be able to come and see that these artists exist.”

When Colombian artist Carlos Gacharna, one of Art Realm’s 14 active members, moved to Long Beach from Wisconsin, he was looking for an art community to be a part of, one he didn’t have to build from scratch as he had done with a different group back in Madison. He said one of the first Art Realm shows he went to felt like an art show crossed with a party.

“There was a whole bunch of brown and Black people, and I was like alright, this feels very familiar and immediately I was like, let me figure out who runs this and that’s when I met Brandie and then a couple months later I was in the next show.” 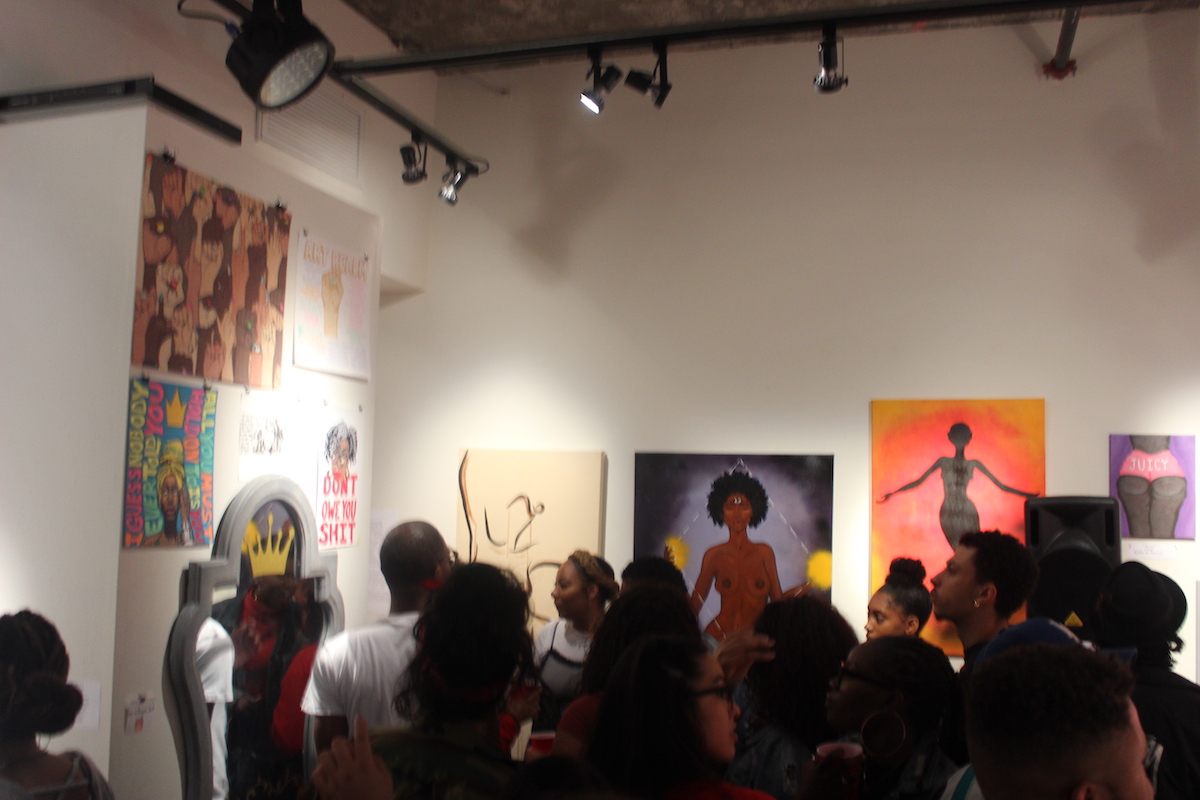 Up to this point, Art Realm has worked with nearly 50 local artists—those who are selected to participate in a showcase are often invited to stay active within the group.

Now, Gacharna is experiencing what he described as the “middle stage” of his art career, along with several other of Art Realm’s artists: “It’s nice to be able to share that experience together and also to reach back at some of the artists that are just getting started to be able to create that ladder that we didn’t have.”

Gacharna, who uses his art to help incarcerated youth, providing them with a creative outlet, described being a part of Art Realm’s all-ages show—one of the youngest artists was 14—at the Ice House Art Complex, “The World is Yours,” in 2019, one of the collective’s most expansive events to date, and feeling the joy of being able to see newer artists discovering what they could achieve.

“I remember there were two artists that that was their first art show ever, and you could tell that their minds were just blown a little bit because they’d never even realized that this kind of thing was possible.”

It was at that show that artist and yoga instructor Rebekah Rose—you may recognize some of Rose’s illustrations in Art Realm’s recently released “Quaranzine,”— pushed herself to create on a larger scale.

“I did a whole installation that was a pipe dream I’ve had for four years,” Rose said. “I’d been wanting to make these big alien cut-outs[…]so just being able to push myself and make something bigger… Art Realm’s given me a lot more confidence.”

Installation in progress by artist Rebekah Rose at the Ice House Art Complex in 2019 for Art Realm. Courtesy Brandie Davison.

Alepsis Hernandez, who has painted murals all over the city of Long Beach and out of state, and whose work was recently featured in Metro Art’s “More People Than You Know” project, said being a part of the group has helped her claim her identity as an artist and take pride in being a Long Beach artist. Greatly influenced by the people she surrounds herself with, she feeds off the energy of those around her and is looking forward to bringing in more artists to the group.

Trinity, whose first show with Art Realm was in 2018, has gone on to show her colorful, vibrant paintings of characters and out-of-this-world scenes in more than 10 exhibitions; Royce Isaac is the filmmaker behind many of the clever video flyers you see scrolling through Art Realm’s Instagram and how the collective first started garnering attention; Gacharna creates interactive spaces designed to create community.

Davison may be busy being the creator, and leader, of Art Realm, but that doesn’t mean she doesn’t have her own art to share. On the boarded-up restaurant BO-beau’s, following the May 31 anti-police brutality protest in Downtown, Davison pasted up a series of black and white wanted posters drawing attention to police violence. The first installation Davison had done in years, it was later removed.

I WENT TO WALK BY DOWNTOWN. THERE WAS SOMEONE ON A LADDER TAKING DOWN MY BOARD. I ASKED, ARE YOU TAKING THEM ALL DOWN. HE SAID NO, JUST THIS ONE. WHILE THE COPS ARE THERE. GUARDING HIM TAKE IT DOWN.

“It just felt like perfect timing to make sure that we’re letting it be known that we care about this movement and that the correct messaging is seen,” Davison said. “It’s not just about peace and love and covering up why people are really angry right now, why the boards are actually down there. It’s a gentle reminder that we gotta keep pushing, it’s not about covering up anger it’s more about placing it in the right direction.”

It’s become about more than simply producing art, and inspiring each other to grow in their careers; the collective has also learned to take care of each other in ways that perhaps Davison hadn’t expected, but speaks of now with genuine pride and admiration.

Sitting outdoors, surrounded by her friends and fellow members of Art Realm, Davison, wearing a mask, speaks calmly about the collective’s vision, as comfortable with not knowing what’s next, or how to even get there, as expressing everything that she’s learned along the way. Rose has a sketchbook open of recently drawn self portraits, while Hernandez leans over her shoulder offering words of admiration. 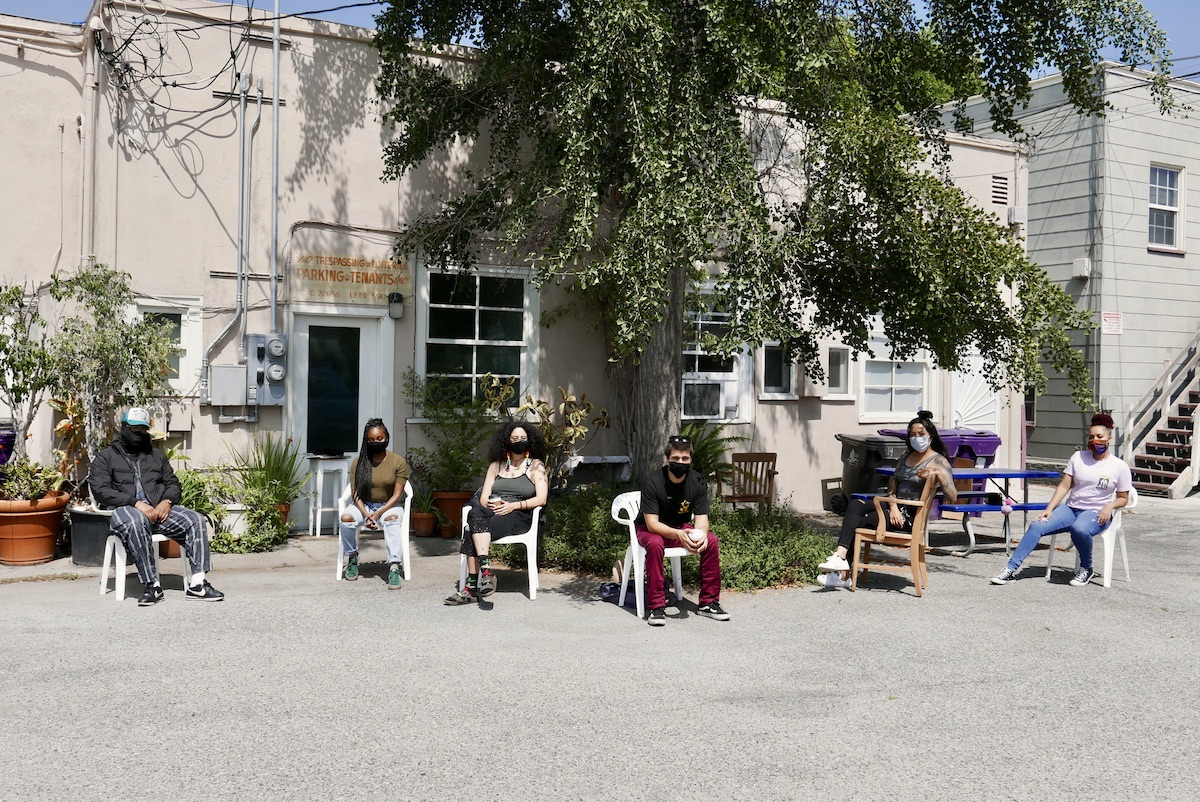 They sit outside, behind artist Betsy Lohrer Hall’s Flux Art Space, where Hall provides Art Realm with room to meet, and has also assisted Davison with other aspects of her leadership role, including writing grants. Davison sees a network in flux, one she’s excited to watch grow while offering opportunities to emerging artists looking to get their foot in the door.

“All of us meeting has been very genuine and it hasn’t just been for gain,” Davison said. “We can introduce other people to Betsy and to her space and I can tell other people about Carlos and what he does for work and introduce him to other educators in the city. When my friends feel off-balance [I can tell them] my friend Rebekah teaches yoga, these things are important and they keep us all running.”

“Art Realm exists due to the help of many friends and peers within the Long Beach art community, the performers, DJ’s, and artists who have lent their talent and time, often free of charge, just to support and share in providing the community with a creative outlet and understanding the need for this platform,” Davison said.

Over the past three years, Davison’s vision for Art Realm hasn’t changed, but it’s certainly expanded with her realization that running the collective is more than “just a thing” she’s doing but involves a continued responsibility in helping emerging artists find opportunities, even outside of Art Realm events. 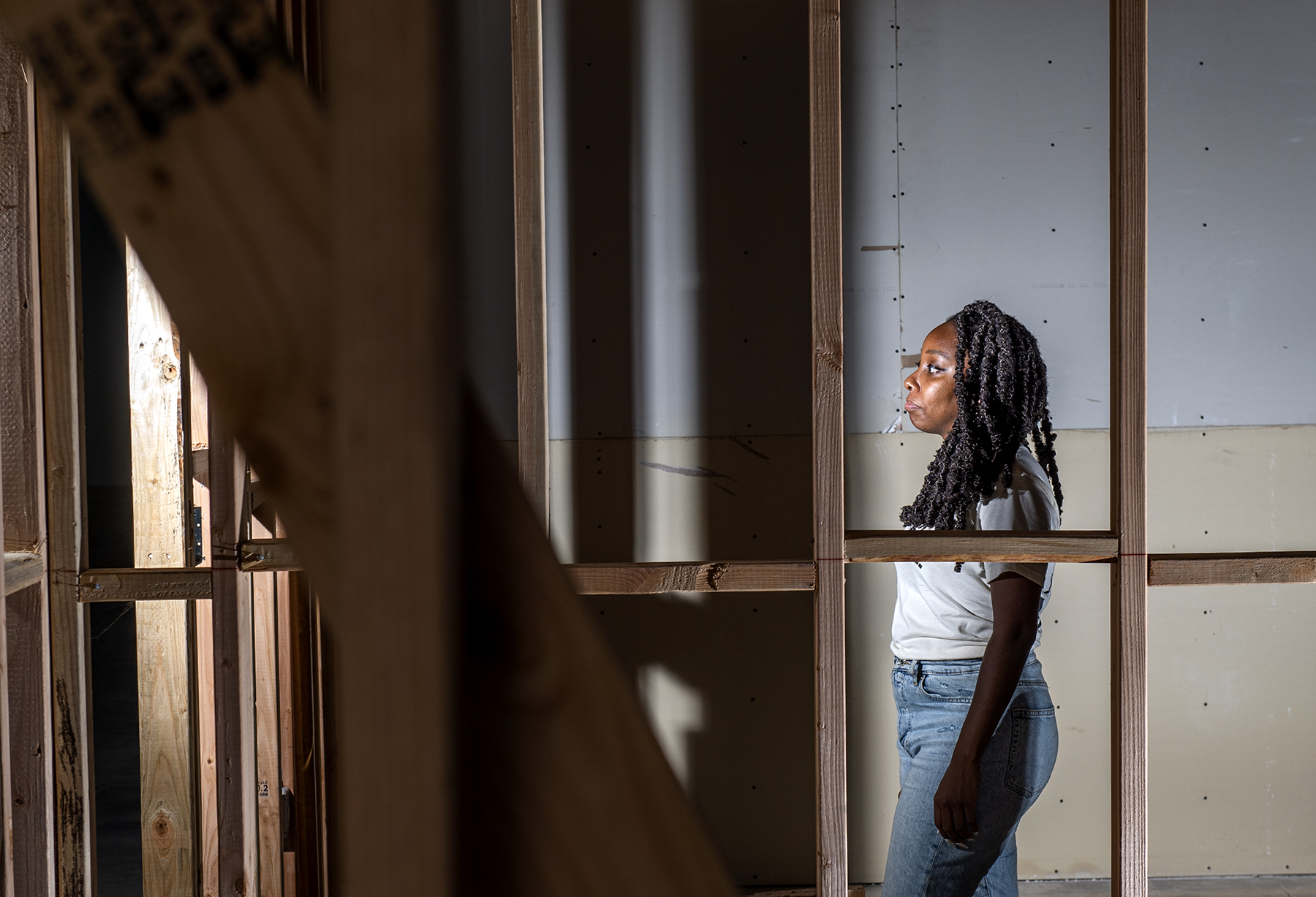 “You can’t do an upscale show or get invited to a gallery until you’ve gotten experience, but it’s like, how do I get experience if nobody will invite me into a gallery?” Davison said. “It’s one of those weird cycles you have to find a way to jump into and I realized we’re playing a part in just getting artists seen where they traditionally wouldn’t have.”

You can pick up a copy of Art Realm’s “Quaranzine” at The Hangout soon; check Art Realm’s Instagram @art.realm.collective for updates and for more information on upcoming events.