When Shayna “Pigeon” Meikle formally announced that her store, the renowned Moxi Roller Skate Shop, would rebrand to become Pigeon’s Roller Skate Shop two months ago, the 34-year-old business owner knew she’d be letting go of one of the most respected and admired roller skate brands in the female, outdoor skating scene.

“People would travel all over the world to visit the Moxi Skate Shop, it was like Disneyland,” she said. “And I knew I was giving that up. But what’s more important is that I’m serving the local people, more than the world.”

She’s speaking to the relationship between roller skating brands and their brick-and-mortar counterparts; the former helps spread interest in the sport, while the latter nurtures the culture and community.

Skate shops have always acted as a sort of homing beacon to the skate community, offering more than just customer service—they offer a visceral experience. Part of it is an emotional connection—the novelty of trying on the skates, the fun of discovering new equipment and accessories. But also, local shops provide the staff with the expert knowledge to answer questions and teach fledgling skaters how to maintain their skates and protect themselves.

Up until this year, Meikle and her staff offered free roller skating lessons in Bixby Park during the summer, giving new skaters the tools to feel more confident on eight wheels while making new connections with other skaters.

The interior of Pigeon’s Roller Skate Shop features a mini-sized skate ramp at the furthermost end of the shop. Photo by Cheantay Jensen.

Despite Meike’s reservation that rebranding might cost her the customers drawn to Moxi, business has been exceptionally good. During their one-day opening in July, hundreds stood outside Pigeon’s Roller Skate Shop, the line of customers spilling down Fourth Street, some having camped out the night before.

It’s all part of a recent, pandemic-era boom in roller skating, a trend that’s attracted cooped-up, restless people, stuck in their homes, looking for safe activities that they can do outside. Social media has done its fair share in glamorizing the sport, especially on TikTok. Videos of young female skaters, coasting blissfully through empty streets and deserted parking lots to pop music are netting millions of views. Hashtags such as #rollerskating and #moxieskates have attracted the eyes of over 500 million views on the app.

Meikle also points out that athletes of all stripes are taking up roller-skating to help maintain their endurance, strength and balance now that indoor sports have been canceled and gyms are closed.

“People who have skated in the rinks, or figure skated competitively, or are gym rats or something that involves indoor exercise, now they need an outdoor activity to stay in shape, to cross train, anything,” Meikle said.

Customers at Meikle’s shop are asked not only about athletic and skill levels, but their comfort level regarding price. Sometimes, Moxi—whose cheapest model until last year was $299—isn’t the best option. Meikle’s shop has always sold different types of brands at varying price points, the least expensive starting at $100, but Meikle believed that keeping her shop named after the illustrious brand, no matter how popular it is, alienated lower-income customers.

There were a number of other characteristics with the Moxi brand—style, image, aspirations, business values—that, Meikle said, ultimately didn’t align with her own vision. She isn’t out to build an empire; she would leave that to Moxi’s founder, and the shop’s former owner, Michelle Steilin. Her plan is to fortify a stronger, more inclusive local skating community.

“We’re not loyal to any brands. We’re loyal to the skaters,” she said. “We’re going to have brands for all price ranges, for all types of people. Access is huge for me. I want to share the feelings that I feel when skating with everyone.”

Meikle got her start in serious roller-skating later than most, the morning after her 21st birthday. In a twist of fate, she finds difficult to explain as anything else but, “meant to be,” 21-year-old Meikle landed herself a spot on a new roller derby team in Santa Cruz, beating out nearly 50 other women. Not only had Meikle never even heard of roller derby before showing up to the tryouts, she showed up dizzy and hungover after a proper night of birthday celebration and still managed to obliterate the competition.

“I was athletic,” she said, and shrugged, adding that she played soccer and skateboarded growing up in Harbor City. She was also the captain of her varsity softball team in high school.

She loved derby. The speed, the power, the freedom. But also, the camaraderie, the sisterhood of the contact sport. 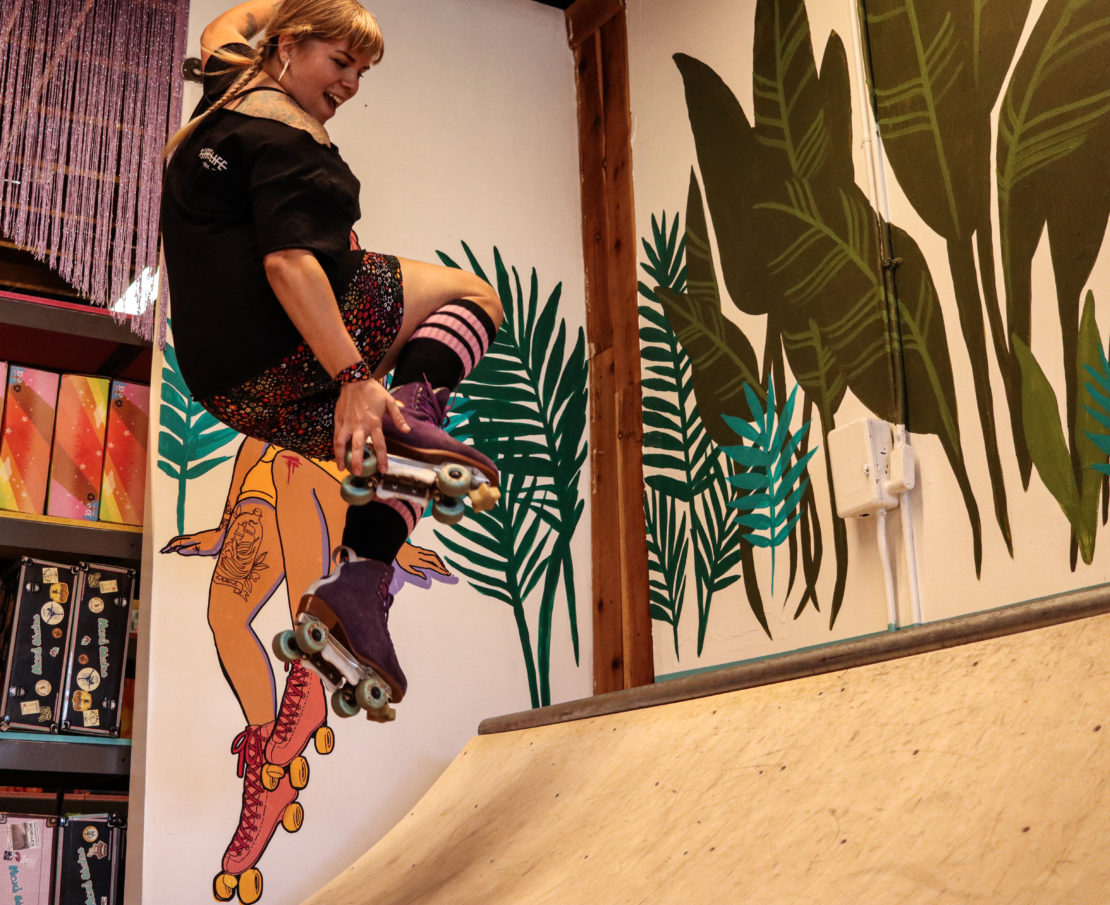 Meikle skates on the sloped mini ramp located at the back of her store. Photo by Cheantay Jensen.

“Being in college, I didn’t care enough about sports to want to play on a college level. That’s too much dedication. I wanted to party. I wanted to explore all the sides of myself. And so finding roller derby in college really fulfilled this hole in me,” she said. “But it also gave me skating and I took my skates by myself outside and skated around Santa Cruz for years, eight hours a day, it was the best time of my life.”

She spent the rest of her college years at UC Santa Cruz studying ecology by day, playing roller derby by night, and giving $25 skate lessons in between for a little extra cash.

Years later, back in Long Beach, her knack for teaching led her to an arts and media-based middle school in East Los Angeles where she taught science to a class of some 300 students. But her love for roller derby lingered and in 2011 she started the Beach Cities Roller Derby league she still manages today.

Roller derby was also what brought Meikle and Steilin together. Before ever meeting face-to-face in Long Beach, word of Meikle and her reputation in the Santa Cruz skating scene reached Steilin who was trying to launch her own roller skates line, looking for powerful skaters to wear her brand. She sent Meikle a selection of skates to choose from—technically, it was her first sponsorship.

“I show up to derby practice in these cheetah-print high-heeled skates and all these women, who are like, 15 to 20 years older than me are just like, ‘Oh my god, how did you get those?” she recalled. “That’s the connection between me and Moxi before I even knew what Moxi was.”

Years later, Long Beach roller derby connected the two skaters yet again and they became fast friends. By 2011, she had Steilin begging her to take over the Moxi shop. “You don’t understand, you’re the only one who can do it,” she’d tell Meikle. And so she did, finally, in the fall of 2013.

“Roller derby and roller skating had taken over my life,” she admitted. She loved it, and she was going to make sure anyone who wanted to try the sport would have the chance to fall as fast and hard in love with it as she did, too. 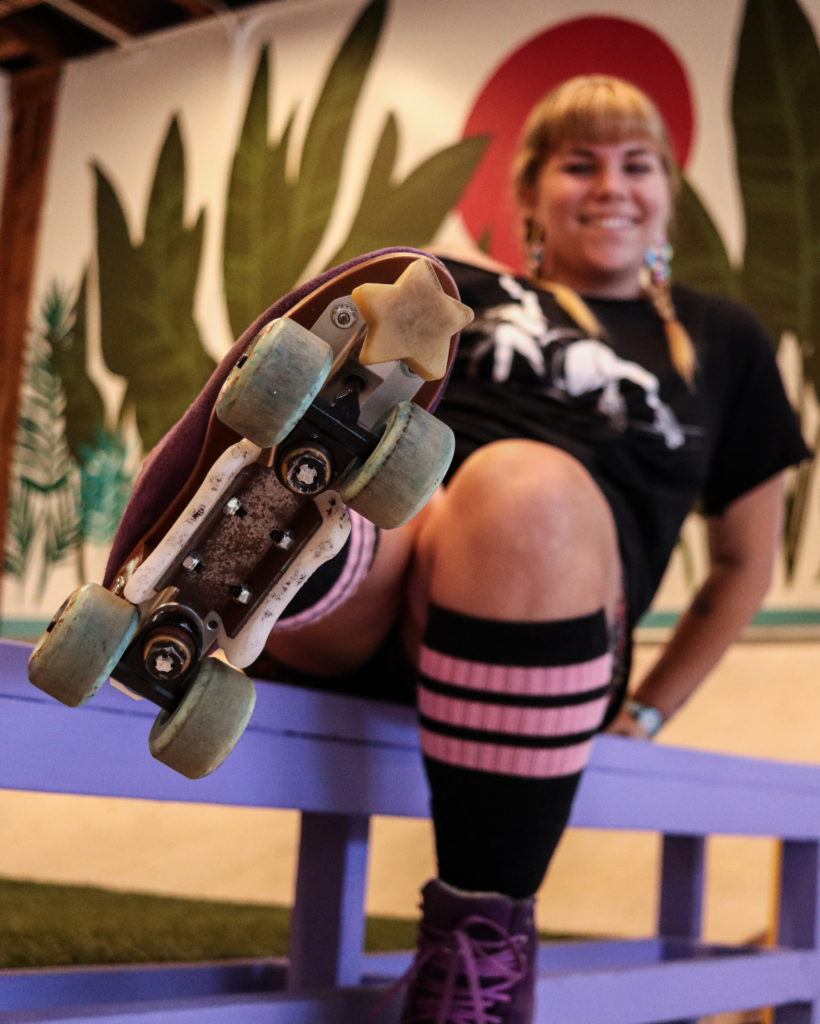 As hordes of new skaters continue to join the scene, Meikle said her shop has experienced unprecedented sales, though, truth be told, she was not prepared for the mayhem.

Just one week after California’s stay-at-home orders went into effect that forced Meikle to furlough her staff of 12 at her flagship store and permanently shutter her second brick-and-mortar shop in Venice Beach, Meikle’s online skate shop business quadrupled in sales.

She went from receiving about 30 orders a day to, almost overnight, dealing with 150. She began to panic. It was only her and one other employee, working 16 hours days, furiously trying to organize, package and ship out the skates from her warehouse in Signal Hill. Every day they were falling behind, after a month, she said, they were weeks behind schedule. Demand had surged, but supply was low. Minnesota-based skate manufacturing company Riedell Shoes Inc, who crafts Moxi Skates, didn’t resume production until six weeks after pandemic lockdowns. By the time Meikle started receiving product again, she was three months behind on orders.

She had brought her furloughed staff and hired three more just to handle customer service.

“Every skate shop has gotten angry calls from customers with horrible, toxic stuff to say,” she said. “I have a two-year-old, it was very stressful for me and my family.”

Things have quieted considerably, much to the relief of Meikle and her staff. Today she says they’re averaging about 70 online orders a day, which is still quite good. And just recently she’s reopened her shop for business every Wednesday from 10 a.m. to 2 p.m., or until they sell out of stock.

This whole experience, Meikle says has been a whirlwind.

“I was a science teacher and I just so happened to play roller derby and skate,” she said. “I have no history in marketing, business, accounting, but I do all my own business stuff, my own marketing home. We’re inventing the wheel as we go.”