Surrounded by the whirl of cyclists, skaters, walkers, stair-climbers and scavenger birds, planted underneath the watchful gaze of the Long Beach Museum of Art and at the edge of the Pacific Ocean, you’d be hard-pressed to find a more fitting home for Dr. Asher David Kelman’s, “Puff of Wind,” the stainless steel sailboat he hopes will inspire young people to follow their dreams.

Thirty-one-feet high and 17 feet long, Long Beach’s newest piece of public art appeared a few weeks ago where Junipero Avenue dead ends at the beach. If you’re familiar with the area, you know it is teeming with activity, making it a natural landing spot for Kelman’s sailboat, which not only conjures up images of movement through its design but actually moves when enough wind is caught in its gleaming sail.

And yet, it did not originally land in Long Beach. It landed in Manhattan Beach a few years back on a rooftop, blocks from the ocean, no natural walkways for people to wander by and see it, its movement suppressed by buildings that blocked the wind.

“There was no free land, the buildings blocked the wind, I really felt like, in Manhattan Beach, it was imprisoned,” Kelman said.

When the opportunity came to move his work, Kelman received offers from across the country—“Santa Barbara, the Carolinas, New York was interested,”—but he had other ideas. He wanted to move “Puff” to Long Beach.

Now, Kelman is not from Long Beach. He has never lived in Long Beach. He didn’t go to school here and neither did his kids. He is a retired university professor of molecular biology and radiology oncologist who grew up in England and now lives in Beverly Hills. But what he knew of Long Beach, he liked.

He liked the city’s diversity, in both its population and public officials. He liked that the city “is not arrogant” and “recognizes that it’s got a long way to go,” that recognition fitting perfectly with his piece’s theme of the individual being on a journey, “an odyssey” he likes to say and that at any moment, that journey can be pushed in unexpected directions by circumstance or unexpected actions or words: a puff of wind. 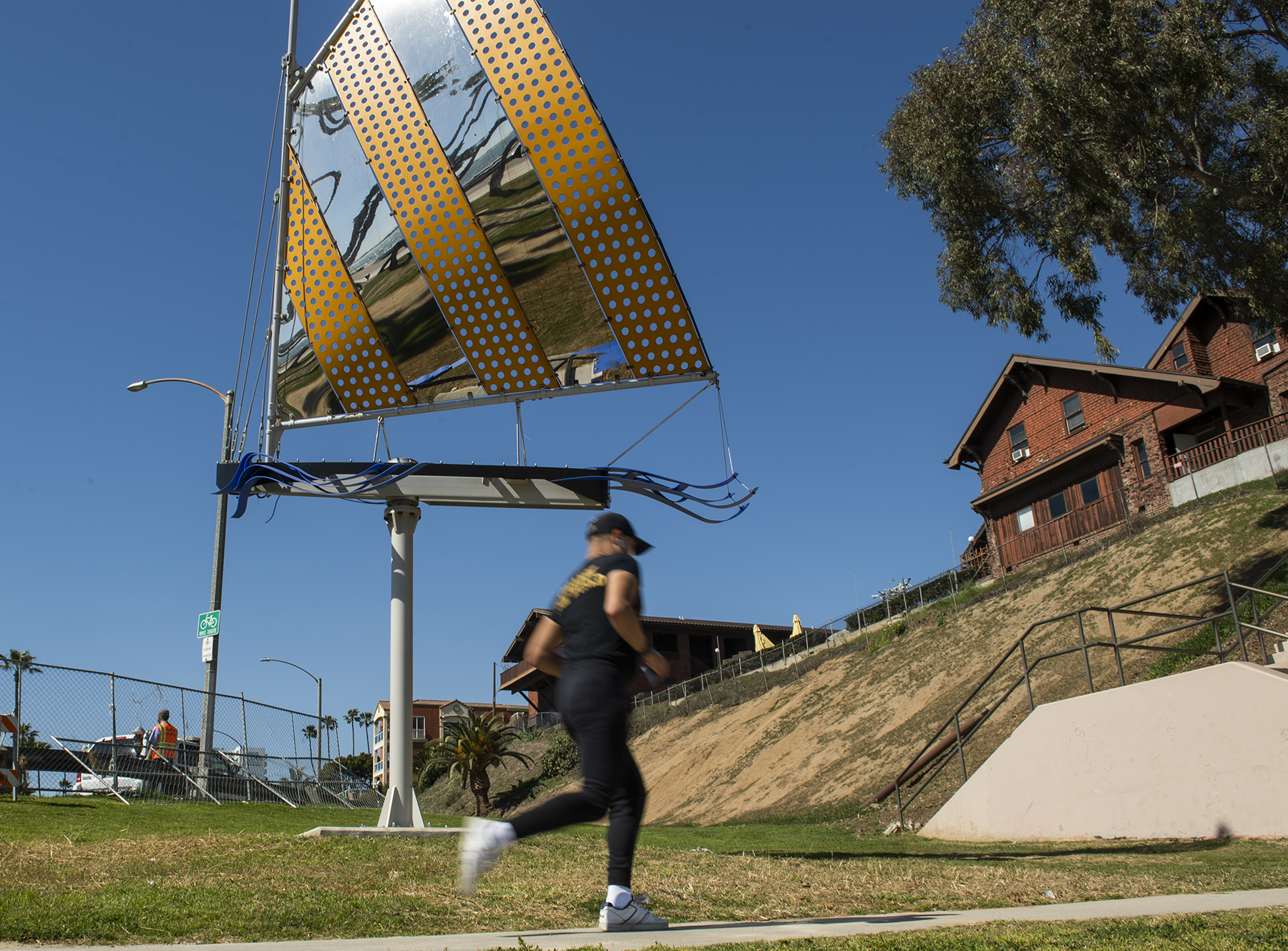 A jogger runs past public art at Junipero by the beach in Long Beach Thursday, February 18, 2021. Photo by Thomas R. Cordova.

It also didn’t hurt that Long Beach is well known for having copious amounts of wind and that the particular spot at the foot of Junipero had been host to the 1984 Summer Olympic sailing competitions.

Ultimately, though, what sold Kelman on Long Beach was that all this came tied up with the promise and energy of youth. He was impressed with the amount of young people in the city, since that is for whom the sculpture was intended.

“The sailboat depicted is for one person, it’s a type of boat that can handle pretty tough waters and still be safe,” he said. “Our job to inspire young people, to challenge them to get in the boat, that if you have a goal and work hard, if you get that puff of wind, that pat on the back, that encouragement from a parent, a teacher, that is the puff of wind and with it, anybody can succeed.”

Kelman reached out to Long Beach city officials and made it clear he preferred to have his piece relocated there.

“He felt it would be a great location to exhibit the piece,” said Eric Lopez, Long Beach’s director of public works. “[Kelman] did prefer Long Beach to other cities and many other cities did inquire about the piece.”

Both Lopez and Mayor Robert Garcia saw the piece, loved it, and soon started in motion the wheels to get the piece to Long Beach. Lopez said there was some initial confusion about who was paying for the piece, but when people were “made aware that the project was donated, they were happy with the addition.”

According to Lopez, just about everyone is.

“Response from the community has been overwhelmingly positive,” he said. “It is a beautiful sculpture that really captures the essence of our coastal city and we are thrilled to have it in Long Beach.”

Kelman said he feels as though his piece has been “liberated” in the city and points out that the very fact it’s here now, proves what “Puff of Wind” is all about.

“I didn’t know that this piece was going to end up in Long Beach, but then I was inspired by the city and now, here it is, in the exact place it should be. This is all about giving people, children especially, the permission to succeed. I want people to be inspired, to be brave, to know that your boat will carry your dreams.”

Kelman says his boat, though exactly where it should be, isn’t quite finished. He has plans to add a plaque sometime in the future. He’s not sure when, but he does know what will go on it; a poem he’s already written:

Daughter and son of man