When Fellippe Esteves and Danielle Soldati opened up their new café, Ubuntu, in Belmont Shore in February 2020, prospects seemed high for the first-time business owners.

Their grand opening saw an impressive turnout, some 350 guests, Esteves said, and momentum was growing. But after only a month into operations, the coronavirus pandemic stalled the burgeoning business.

“It was definitely one of the hardest things I’ve ever done in the restaurant business,” Esteves said, whose career in the high-end restaurant industry, including opening a restaurant with Bravo Top Chef celeb Stefan Richter, spans over 20 years. “You have reopening expenses landing on you and then 30 days later, you don’t know how you’re going to pay the bills. But from day one I told my wife, we’re not closing.”

The restaurant was able to stay open for much of the pandemic, even after the governor shut down indoor dining in early July, but by then the café was thriving.

Situated across the street from the Colorado Lagoon, Ubuntu’s sleek, modern styled building features a spacious patio, a fortuitous design through the pandemic as dining was consigned to open air. Though the ambiance of the space, from the trickle of the cascading water feature, to the small bouquets of flowers gifted on each table, to the gardens of succulents tracing the grounds, made for its own dining attraction.

“We really wanted to make it [the café] welcoming and warm,” Esteves said. 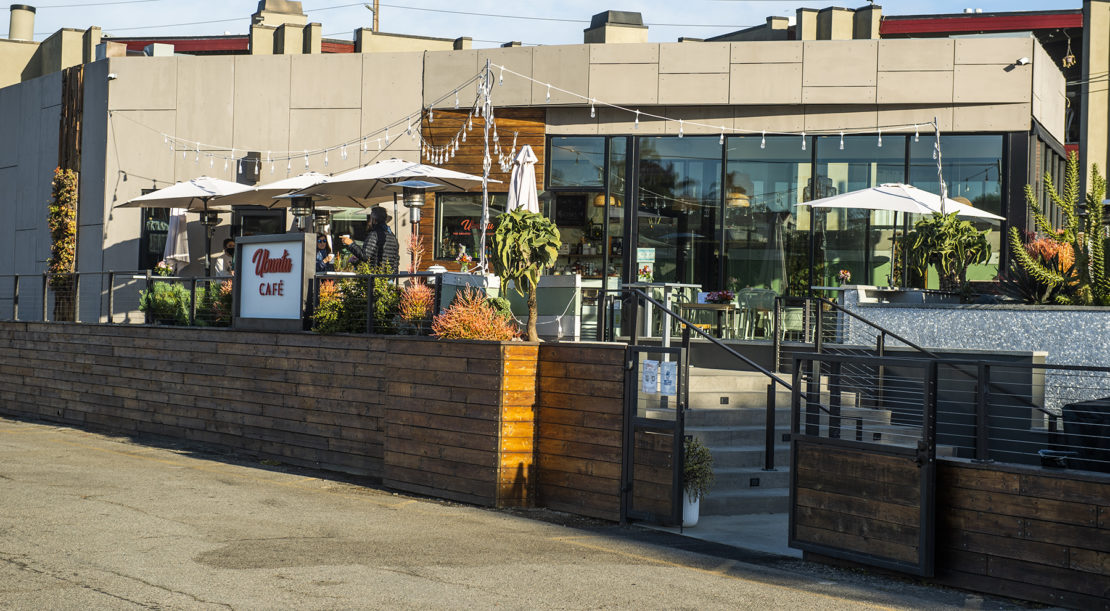 But the complete closure of outdoor dining on Nov. 25 meant the restaurant, along with others throughout the city, had to pivot to takeout and delivery only.

Forced to temporarily let go of all their staff, Soldati, Esteves and one chef manned the restaurant, prepared to weather the uncertain months. But the Belmont Shore community had other plans.

“Especially in the first month [March], people would come to get a coffee, pick up a pastry, every day,” Soldati said. “We decided to do family dinners and people would come over to get just one meal to make sure we’ll stick around. The amount of support we got in the midst of the pandemic was unheard of.”

As Ubuntu reopens to outdoor dining Friday, Jan. 29, the couple are eager to pick-up where they left off before the second wave of stay-at-home orders, which was lifted Monday. Rather than scurry to reopen, Esteves and Soldati chose to take the extra days to hire and re-train their staff and prep their restaurant to live up to its shining statement: as the greatest neighborhood café.

It’s not without merit.

The minutiae of detail evident in the café’s ambiance translates tenfold to the menu, from preparation to presentation. The lavender latte, a creamy sip subtly infused with the aromatic flower, can be steamed with a choice of oat, almond, walnut or cashew milk, made in-house. If enjoyed on-site, the latte is served in a ceramic coffee mug, with tiny lavender buds tracing the saucer. Frozen black coffee cubes clink and swish in every iced coffee, ensuring the jittery concoctions’ espresso bite never diminishes. 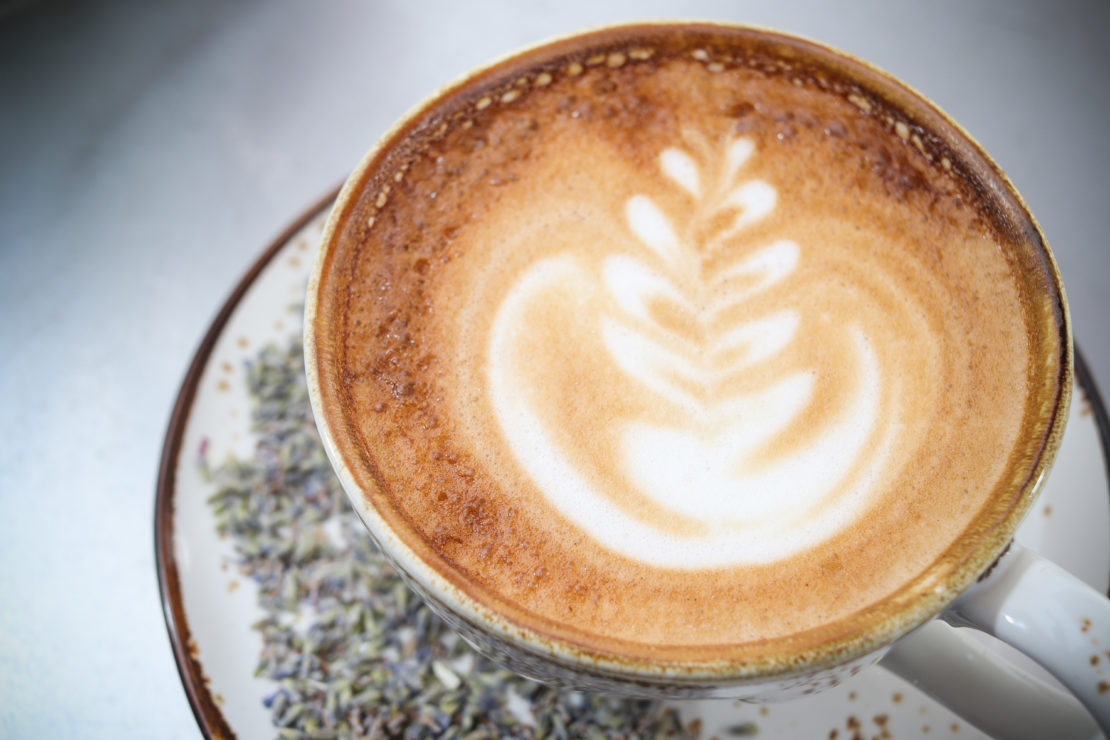 The lavender latte at Ubuntu Cafe. Photo by Cheantay Jensen.

In a pastry display next to the register, hand-written name cards label the day’s selection of soft, flaky French pastries, muffins, croissants and baguettes, imported daily from a special bakery in Los Angeles. 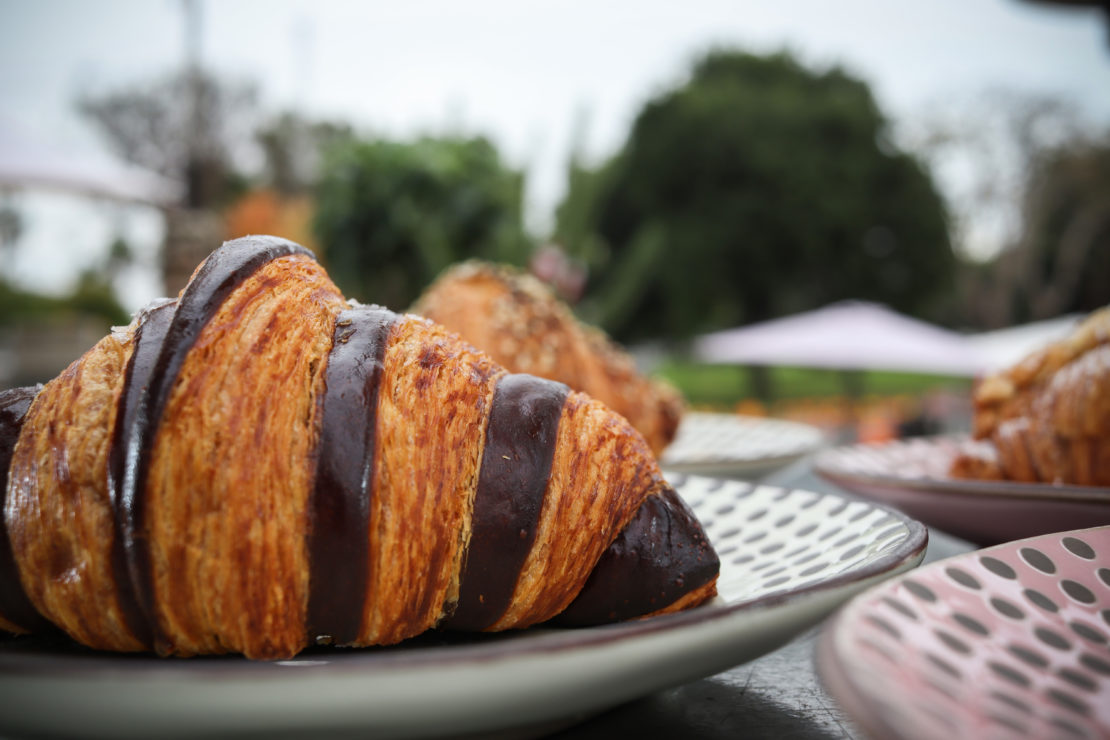 The chocolate croissant at Ubuntu Cafe. Photo by Cheantay Jensen.

Their menu, envisioned by both Esteves and head-chef Carlos Jurado, who opened the lauded Vespertine in Culver City, is prepared with locally sourced ingredients, from farm-to-table. As such, much of their menu changes with the seasons.

“We work with a beautiful vendor who has about 10 farmers markets under their belt,” Soldati said. “They send us an email with every single vegetable, with all the pictures, so we can pick and choose whatever is in season.”

That said, there are a handful of staples that will always be available—their brunch menu a particular attraction for guests.

An innovative take on the open-faced breakfast trend, the Smashed Avocado Toast is loaded with fresh hass avocados, sliced pieces of hard-boiled egg, adorned with watermelon radish and sprinkled with pomegranate seeds.

The Strawberry Fields Ricotta Toast is a beautiful tribute to the sweet, acidic divinity of the strawberry. Generous helpings of the red fruit, paired with basil leaves, sit atop a layer of house-made ricotta and a lightly toasted brioche slice. The soft, subdued flavor and creaminess of the ricotta allow the strawberry to shine—a must-try. 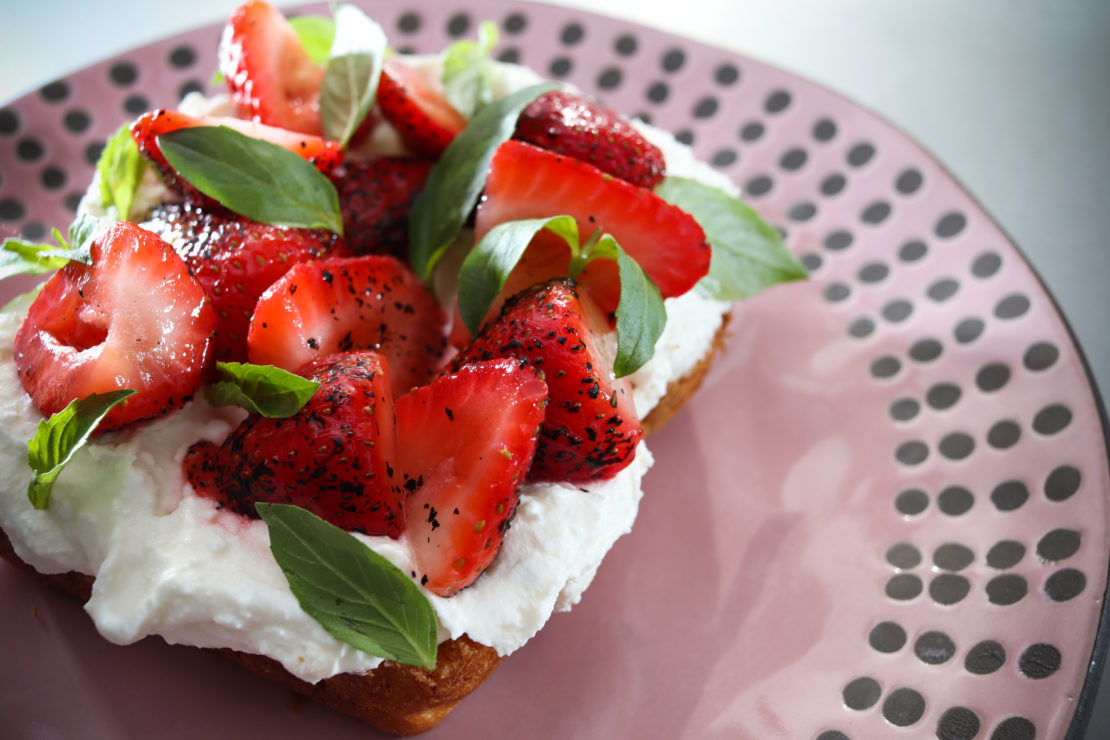 It would also be oversight not to mention Ubuntu’s omelet, a tribute to the French preparation; delicately rolled, buttery and pillowy to the touch. At its base level, the omelet is rolled with a smattering of chives, but the chanterelle mushrooms are a tempting add-on.

“We usually say that once you try our French omelet, we mess you up for life,” Soldati said.

On your first visit, expect to spend a few minutes studying the menu, laboring over the decision of what to try first. From crisp, light salads to hearty soups to decadent burgers and sandwiches, each with its own unique recipes and flavor profiles, choosing can feel hairsplitting. But at some point, it’s imperative to try the cod croquettes and Brazilian cheesy bread (the latter, the recipe of Esteves’s late mother), as both dishes are a delightful nod to Soldati and Esteves’ Brazilian heritage. 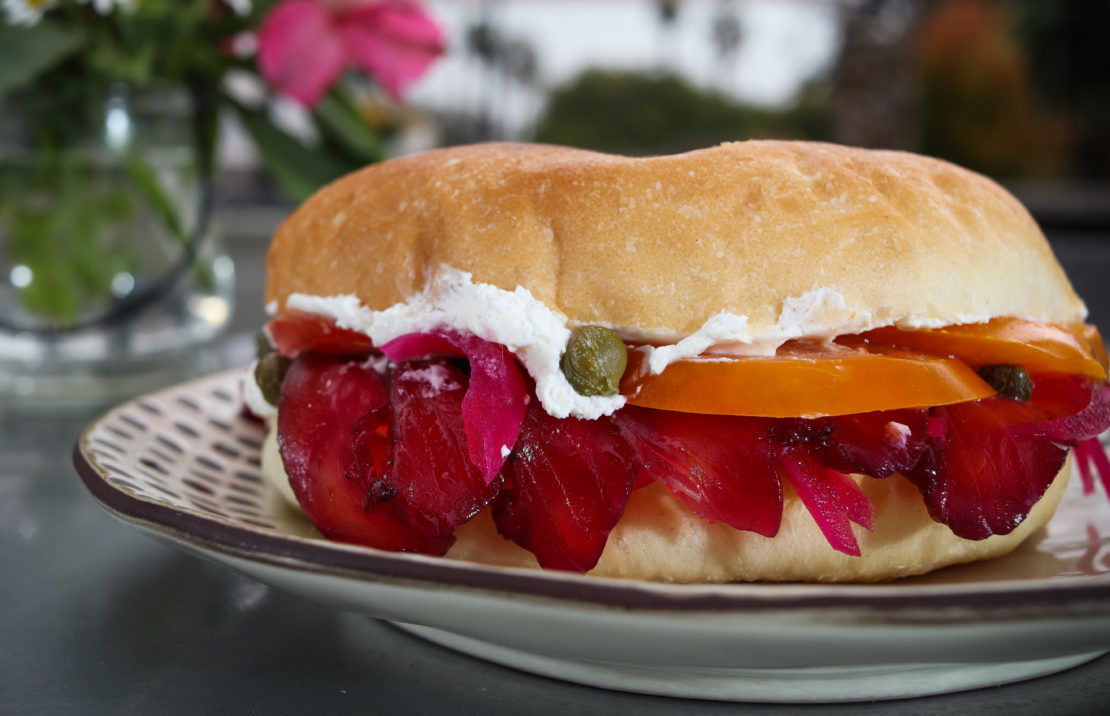 The Lox Bagel at Ubuntu Cafe. Photo by Cheantay Jensen.

Their café is named after the South African philosophy of compassion and camaraderie, about working together towards a common goal. The phrase often translates to “I am because you are.” As the couple move forward with their endeavor, though the ups and down, they remain grateful.

“Now we understand why this happened. It definitely made us stronger as restaurant owners, but it gave us the opportunity to grow with the community. We made connections that will last forever,” Soldati said. 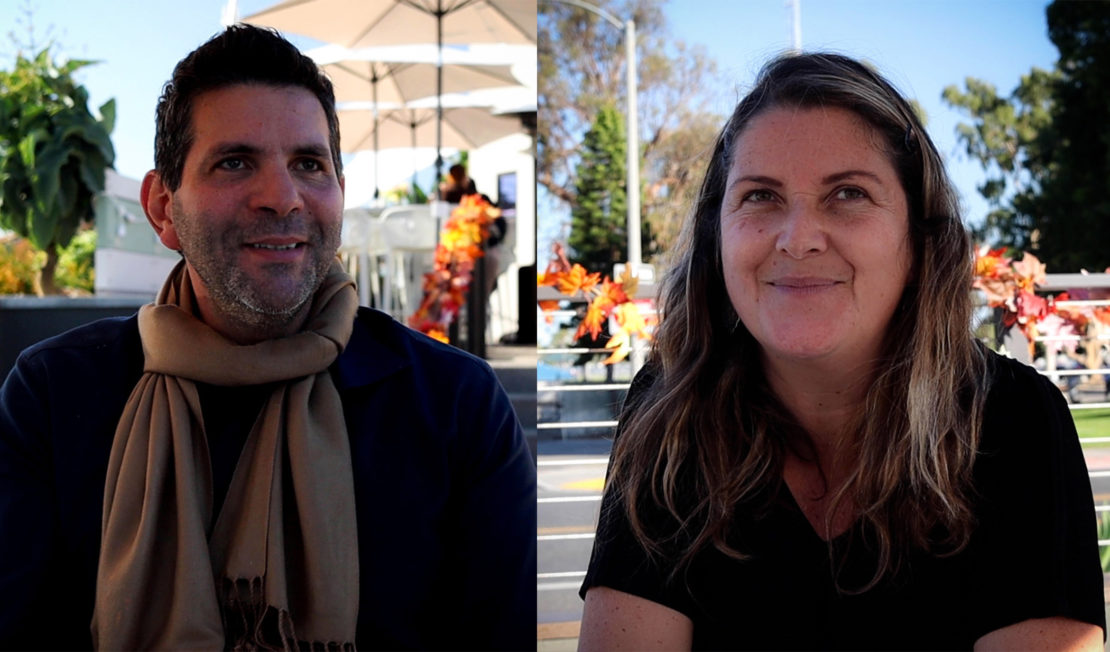