‘This is for everybody’: New CSULB museum nears completion • the Hi-lo
- ADVERTISEMENT -
BEST FEST 2022® Live and in person — June 16. RSVP NOW

But in June 2020 the university embarked on an ambitious renovation and expansion project it hopes will solidify its place as a cultural and community beacon.

Though heavy machinery, caution tape, pallets of wood and other building materials are still scattered throughout the museum, the project is nearly complete—at least the interior spaces, which are largely finished except for cosmetic details and furniture.

On Oct. 15, Clark Construction Group will turn over the new museum, renamed the Carolyn Campagna Kleefeld Contemporary Art Museum, to the university—right on schedule. 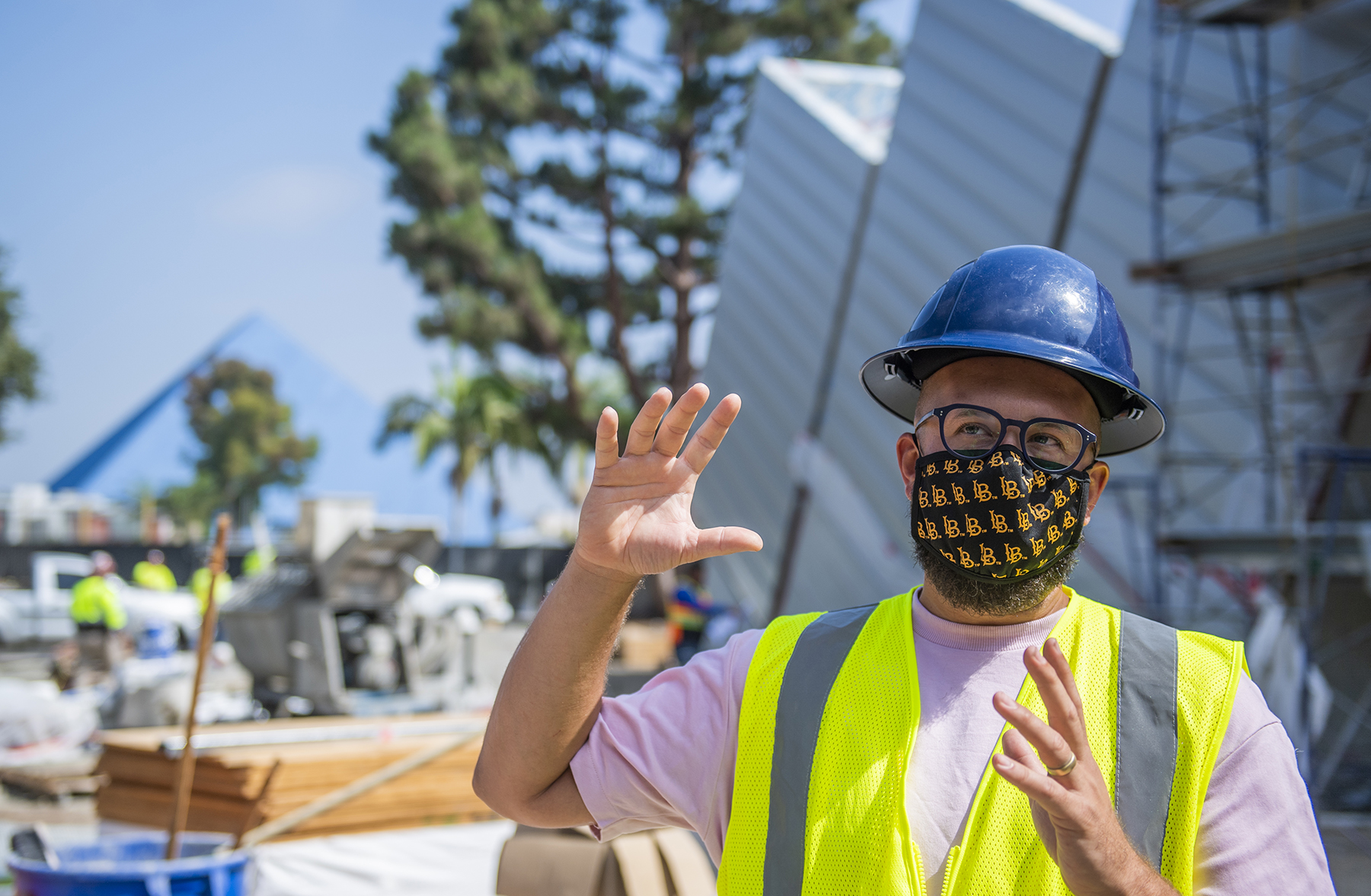 The university will use that time to prepare for the museum’s public opening on Feb. 12, where CSULB students and the public at large can expect more art, programming, resources and educational spaces.

The renovations will add 4,000 square feet, more than doubling the exhibit space. Most of that space, 3,000 square feet, is dedicated to the museum’s Main Gallery that will be built with moveable walls, allowing for multiple exhibitions at a time.

New additions will bring the museum’s total square footage to 11,000, including new outdoor gardens and seating areas, and will feature a state-of-the-art education laboratory, a reading and archives room, office spaces, a visitor’s lobby and reception area, a retail shop, a temperature-controlled storage vault and three permanent gallery spaces, some of which will have multipurpose uses. 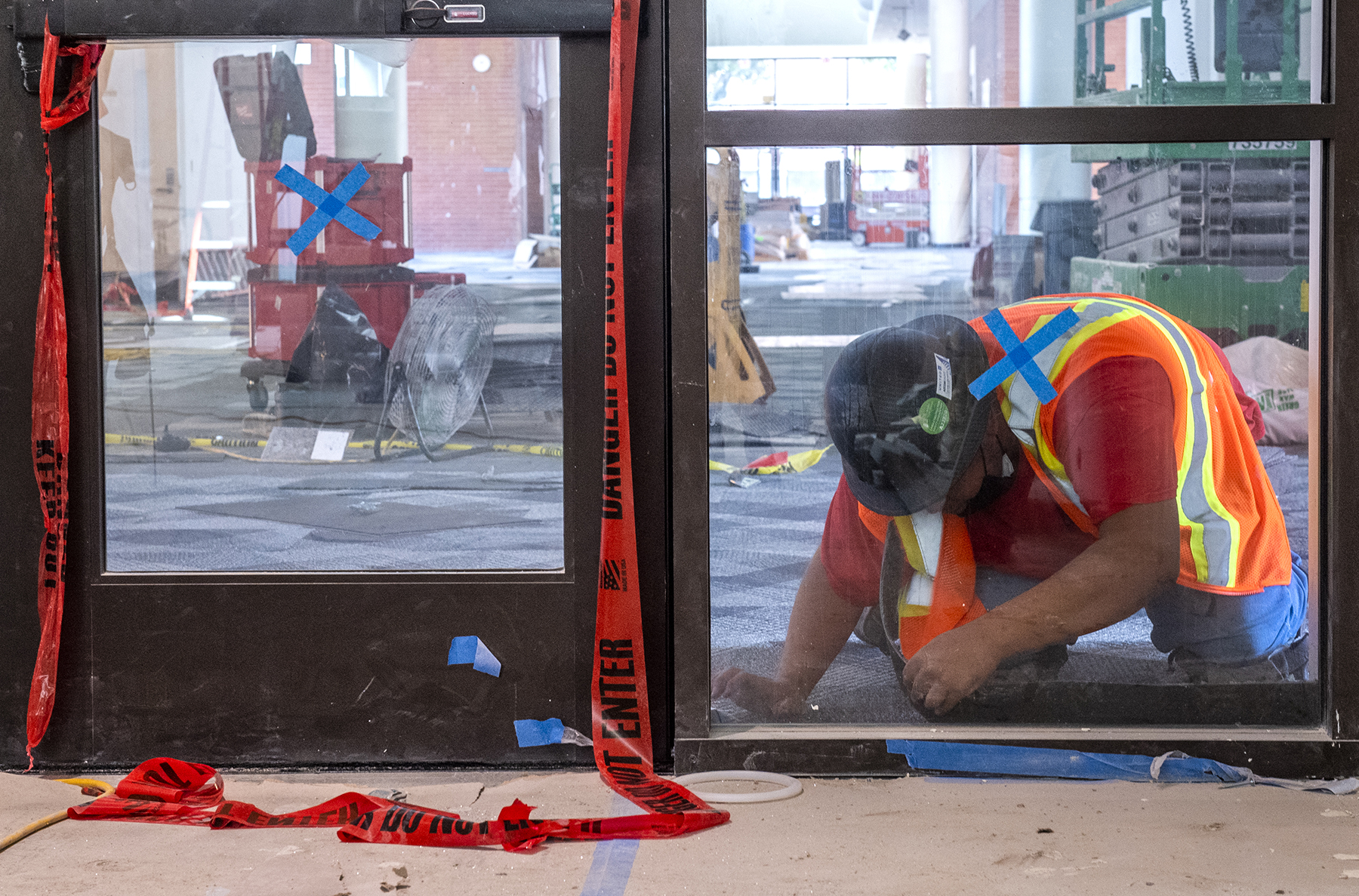 A connection works lay carpet outside one of the entrants of the Carolyn Campagna Kleefeld Contemporary Art Museum while it’s under construction at Cal State University Long Beach in Long Beach Monday, August 30, 2021. Photo by Thomas R. Cordova.

The secondary Mini Gallery will show a collection of works by Canadian painter, muralist and printmaker Rita Letendre. And inside the Community Gallery, Impasto landscape paintings by Torrance-based artist Hung Viet Nguyen.

Finishing the exterior and outdoor spaces of the museum will be the final stages of the renovations. Pfeiffer Partners Architects designed the expansion’s facade and roof with triangular points, a nod to the nearby Walter Pyramid. The motif will continue through a near-15-foot-tall diamond offset glass vestibule at the museum entrance.

A landscape of native and water-wise plants will decorate the outdoor garden. This choice aligns with a prominent factor in the building’s design: sustainability. The museum is nearly complete with LEED Silver standards, notably achieved with LED lighting throughout and solar panels to be installed on the expansion’s roof.

A total of $24 million is being used for construction, but not all of that is going to the museum project. The budget is shared with a separate but simultaneous renovation to the neighboring Horn Center, now in the process of retrofitting and converting its computer lab and undergraduate advising center into 10 classrooms and two lecture halls.

Renovations to the Horn Center are state-funded, while private donations are footing the bill for the museum. Its greatest benefactor is the museum’s new namesake, artist Carolyn Campagna Kleefeld, who donated $10 million, as reported by the Daily 49er.

Her contribution also inspired a separate, smaller gallery inside that will feature a permanent collection of her works. The 521-square-foot-room will be outfitted with cozy features including a barrel ceiling, maple hardwood flooring, and a custom-built light fixture designed to emit a soft, glowing effect. 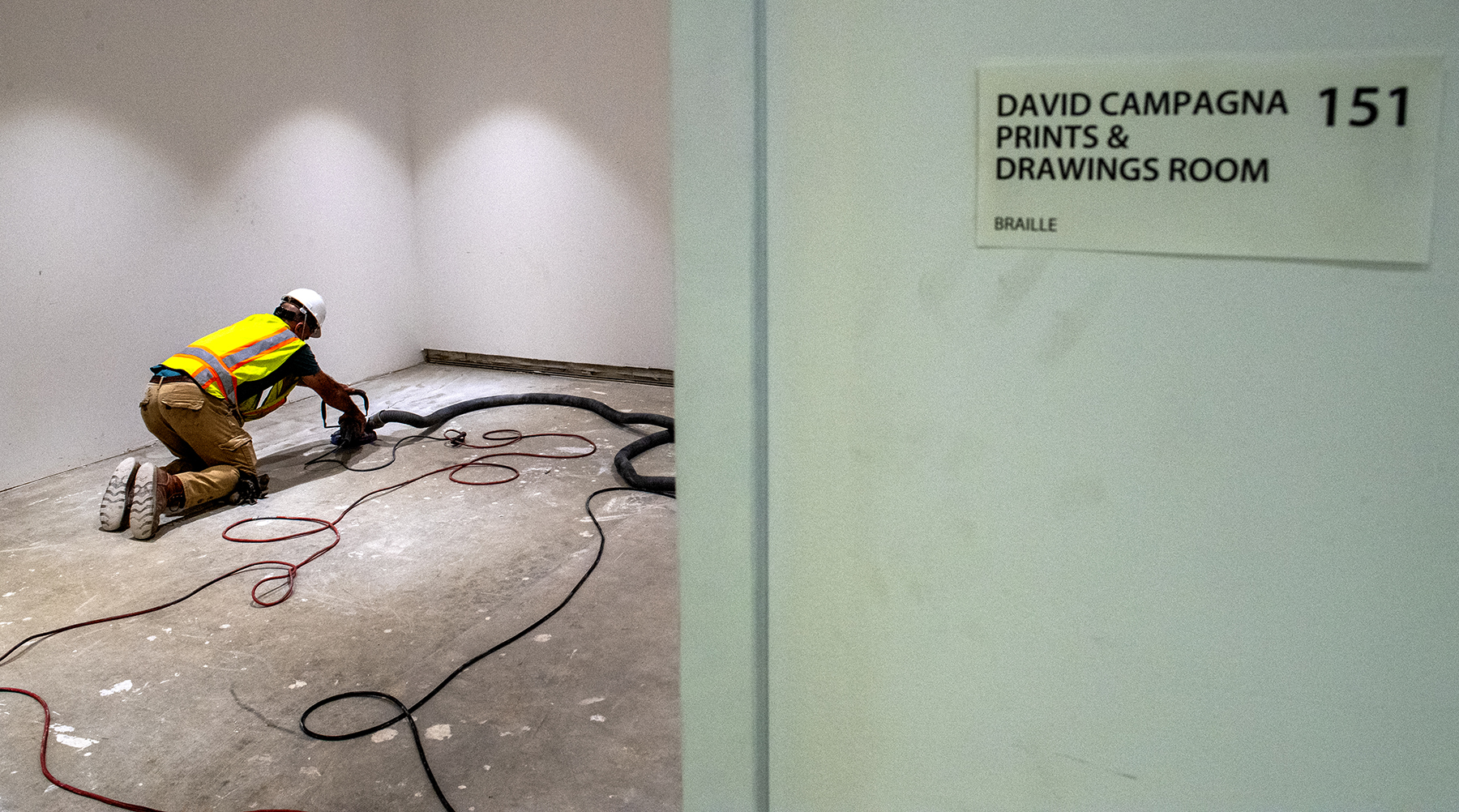 Prindle calls it the heart of the museum for its central location inside and for its prospective community purposes, with poetry readings, wellness programs and opportunities for “quiet and loud hours.” These will help foster a message of welcome and inclusivity, Prindle said, as the artist has always tried to accomplish with her philanthropy.

“Carolyn’s mission is to inspire and support people creatively,” he said.

In designing the new museum, Prindle said he and his team focused on ways to build community and improve usability.

“Every choice we made was to support programs. There are no fluff spaces, no vanity spaces,” he said.

The Kleefeld museum wasn’t designed to look or feel like a museum where millionaires might rub elbows with other millionaires. It’s a space meant to be the “people’s museum,” an idea, Prindle said, that has been muddled since the inception of France’s Louvre Museum in the 18th century.

“It [the Louvre] was designed for everyday people. Napoleon was trying to convince France that art is for everybody. And so, making art for everybody is at the foundation of museums,” he said. “This notion that they need to be these sacred, quiet spaces is a corruption of the original idea. This [museum] is for everybody.”

And by everybody, they sincerely mean it.

Seating will be available in every room, an important touch for people who struggle to remain standing for long periods of time. Extended evening and weekend hours improve access. Color enhancing Enchroma glasses will be available for people experiencing color blindness. Their education lab will be available with materials that youth and adults can use. They’ve built all gender restrooms and added a nursing room for parents with young children.

And, the Kleefled will be the only museum in the city that does not charge an admission fee.

“As long as I’m director, this museum will be free,” Prindle said. 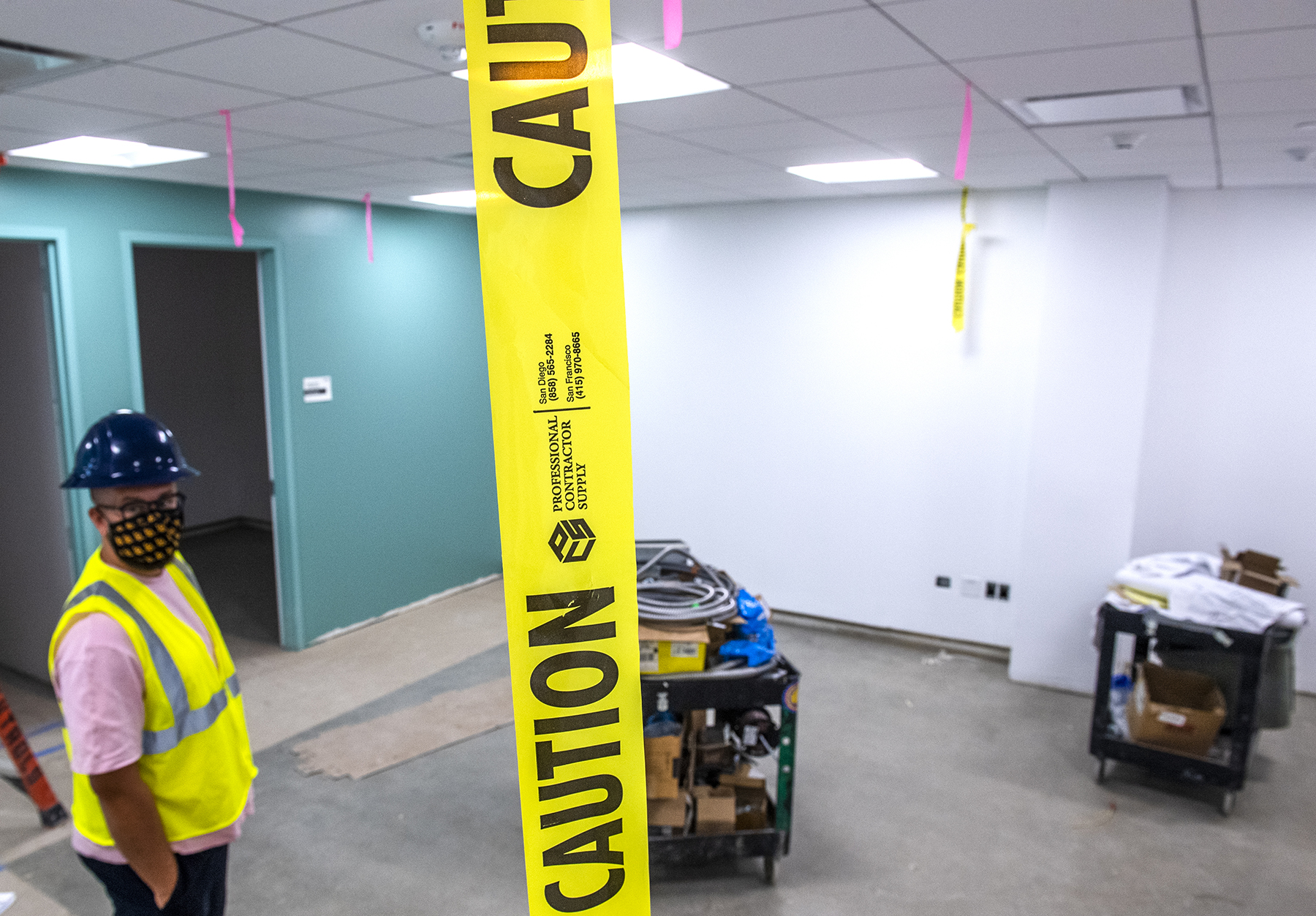 The Museum director’s Paul Baker Prindle stands in one of the many rooms of the Carolyn Campagna Kleefeld Contemporary Art Museum while it’s under construction at Cal State University Long Beach in Long Beach Monday, August 30, 2021. Photo by Thomas R. Cordova.

The university hopes to double its endowment to $6 million by the end of 2024, Prindle said—a lofty goal, but if accomplished, would permit the university to invest in more projects and educational outreach at scale, most notably the university’s “Plugged-In Program.”

That program reaches about 1,500 fourth-graders and high school students and offers, among many things, digital arts programming, docent visits, and culminates in a trip to the museum. The field trip portion has been put on hiatus since the pandemic.

The effect of this programming has a profoundly positive effect on its students and campus, Prindle said, and they’d like to increase this.

“We know that it takes only one visit for a child who has no family that has gone to college, to imagine themselves here and then go to college, it has a direct effect, we see direct corollaries,” Prindle said. “Kids who visit campus museums end up going to college.”

There are several naming opportunities available at the museum that would directly benefit the endowment, including the Main Gallery, Mini Gallery, Community Gallery, education laboratory and the outdoor garden on a 10-year contract. The most expensive of those is $200,000, Prindle said.

Editors Note: This story has been updated to the correct spelling of artist Hung Viet Nguyen and reflect information regarding endowment beneficiary programming, which does not include the Getty Museum Internship as previously reported.