The evening after the May 31st, police brutality protest sparked by the killing of George Floyd, Downtown Long Beach was near-deserted, the only remnants being the National Guard, some volunteer cleanup crews in search of shattered glass and the artist Vlad Noel, perhaps better known as WhosVlad, wielding a spray can, transforming plywood panels into something he hoped would be a little more beautiful and a little less of an invitation to vandalize.

There, at The Loft on Pine, painting with a few other artists and some friends sitting back and playing music—the thing becoming, at times, as much dance as paint party—Noel owned that this was all a spur-of-the-moment thing, something he knew he had to do: to prevent businesses in his neighborhood of Downtown from being looted again—an estimated 70 businesses were damaged the night of the protest—he would use art to give someone pause, to think twice before breaking and entering.

“We need this. We need this so the people who are angry like that, who don’t take the time to think, can see something that will stop them and actually calm them down,” Noel said, his voice sounding painfully hoarse from yelling in the demonstration the day before. 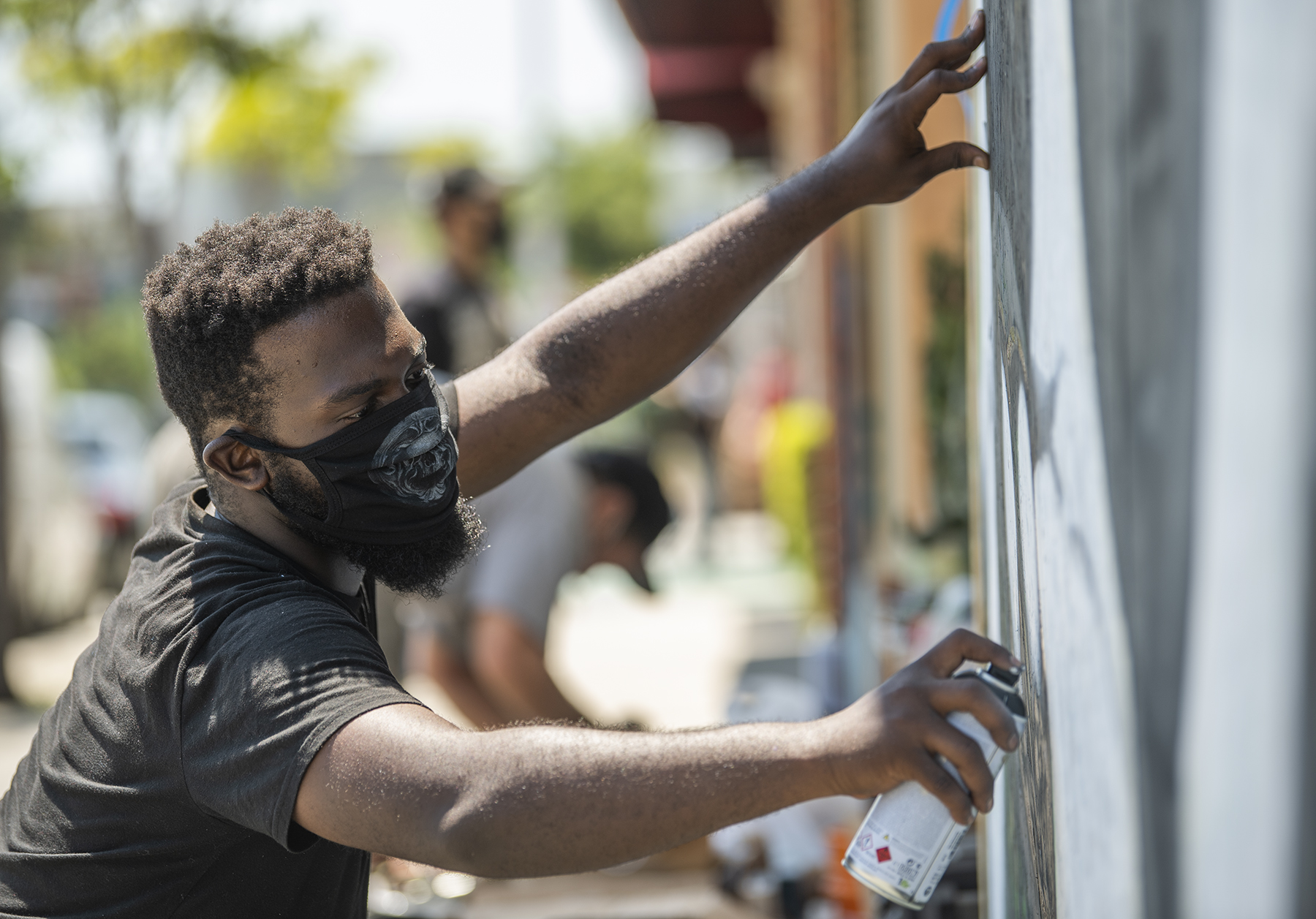 He gave no direction to the artists that painted with him since “there are plenty of boards, plenty of messages that need to be told.”

For such extraordinary circumstances, his manner was almost casual, the only thing that belied the time and the place being the damage to his voice and how his smile receded each time an LBPD patrol car appeared. And then the smile would return, becoming a knowing grin, the expression of someone that, despite being so young and so early in their career at 25, already belied a resilient, realistic optimism toward the power of art to spark change.

“If you’re scared of Black people or you think Black people are ignorant, that’s where racism is building that stereotype in your mind. So, at least you come here and you break that wall with just a nice picture,” Noel said of his subject matter, creating images of beautiful Black and multiracial figures. “That’ll at least give you a second. It’s crazy in these passing-by moments how people can just become friends, or at least friendly.”

The next day, and as word spread on social media of what he was doing, even more artists could be seen down the block adding art to blank boards with messages of peace and solidarity with the Black Lives Matter movement, some approaching Noel to ask where it was cool to set up.

“The city respects art, the city is made of artists,” Noel said, who moved to Long Beach about four years ago from Los Angeles by way of Miami. “So, if art is going to be what it takes to keep everybody calm, then we have plenty of them.”

We hit the whole block! Building Long Beach back board by board. I never thought we’d blow up so much! The city loves us and we love you. I started with the hopes of a couple friends helping me help others. Now it’s a whole movement. Thank you Long Beach! It’ll be alright soon… @artbyblu @rivvl_collective @lajon39 @laloh_one @whosvlad @baileyuntame @loveeelea

Knowledge is greater than ignorance

Ten days of nonstop painting later, an exhausted Noel sat on an upside-down paint bucket outside of Play Nice LBC on 4th Street. Taking a breather from working on what was maybe his 8th or 9th piece—he’d lost count—Noel chatted with friends who stopped by to help him and fellow artist David Rodriguez who was working on a mural on the same building.

“We met up at the protest on Sunday,” Rodriguez said. “Monday he sent me a message asking if I was down to go paint the boarded up buildings that were looted and that were closed, the Mom n’ Pop shops, and then it turned into an everyday thing.”

Rodriguez, who grew up in Hollywood and recently moved to Long Beach from Florida, said he’s never experienced this many creatives coming together outside of an organized event. It was Noel, “his drive to do art,” that pushed their project past any of their initial expectations.

Michelle Molina, owner of MADE by Millworks, had artists Alex Diffin, Erick Guadarrama and Lajon Miller start painting the boards outside the gift shop and art gallery during Monday morning’s community cleanup, said it wasn’t long before she saw Noel and crew show up to beautify The Loft on Pine right next door, working as long as they could past curfew, before the National Guard said it was time to go.

“Vlad and Blu and others were a force to be reckoned with, a mural-hurricane spreading all around Downtown,” said Molina, who with some of her Downtown neighbors, pitched in to pay more than 20 local artists to paint some of the murals now seen up and down Pine Avenue. “If it was broken and boarded, it got painted.” 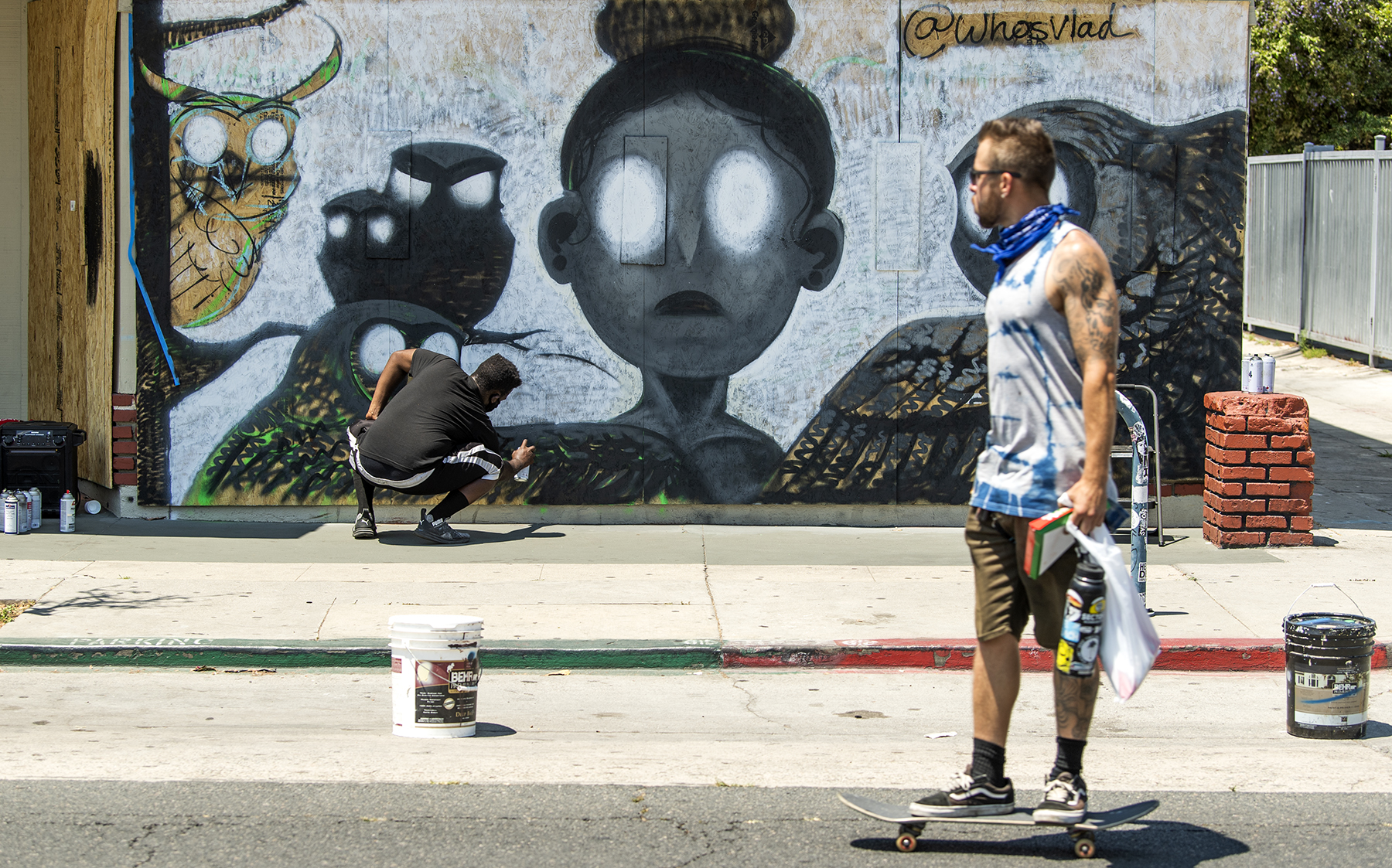 A skateboarder zooms past Vlad Noel as paints a mural on boarded-up business, Play Nice, at the 1000 block of East 4th Street in Long Beach Wednesday, June 10, 2020. Photo by Thomas R. Cordova.

Noel’s initial plan was to continue painting until he ran out of his own supplies, but he soon found himself overwhelmed with donations. Those who wanted to support began dropping off paint, while a friend shared his Venmo account on Instagram and sums of $5, $10, $25 came pouring in, “so we kept going,” he said.

“We,” referring to some of the first artists who came out to help, included Blu Fernandez, Karina Vasquez and Oni, who worked collaboratively on the boards near the first mural Noel painted outside of The Loft on Pine, as well as Lajon Miller, with his powerful pink-haired characters.

Noel’s mural outside of Play Nice LBC, “Knowledge is Greater Than Ignorance,” shows a group of owls, their eyes wide open and glowing with knowledge, shielding a young woman from ignorance, he said. While the mural is a symbol of protecting the cultural and educational hub that is Play Nice LBC, it also represents what he feels the murals achieve as a collection.

“We’re all outside, we’re watching our favorite spots,” Noel said. “You know, I’m on the corner looking down at Hops & Vines, I’m making sure the cat lounge doesn’t get broken [into], I’m looking at Village Treasures across the way from Vons, I’m looking at Vons, as well. That’s pretty much what the community is doing, we’re just sheltering it from the ignorance that’s going on.” 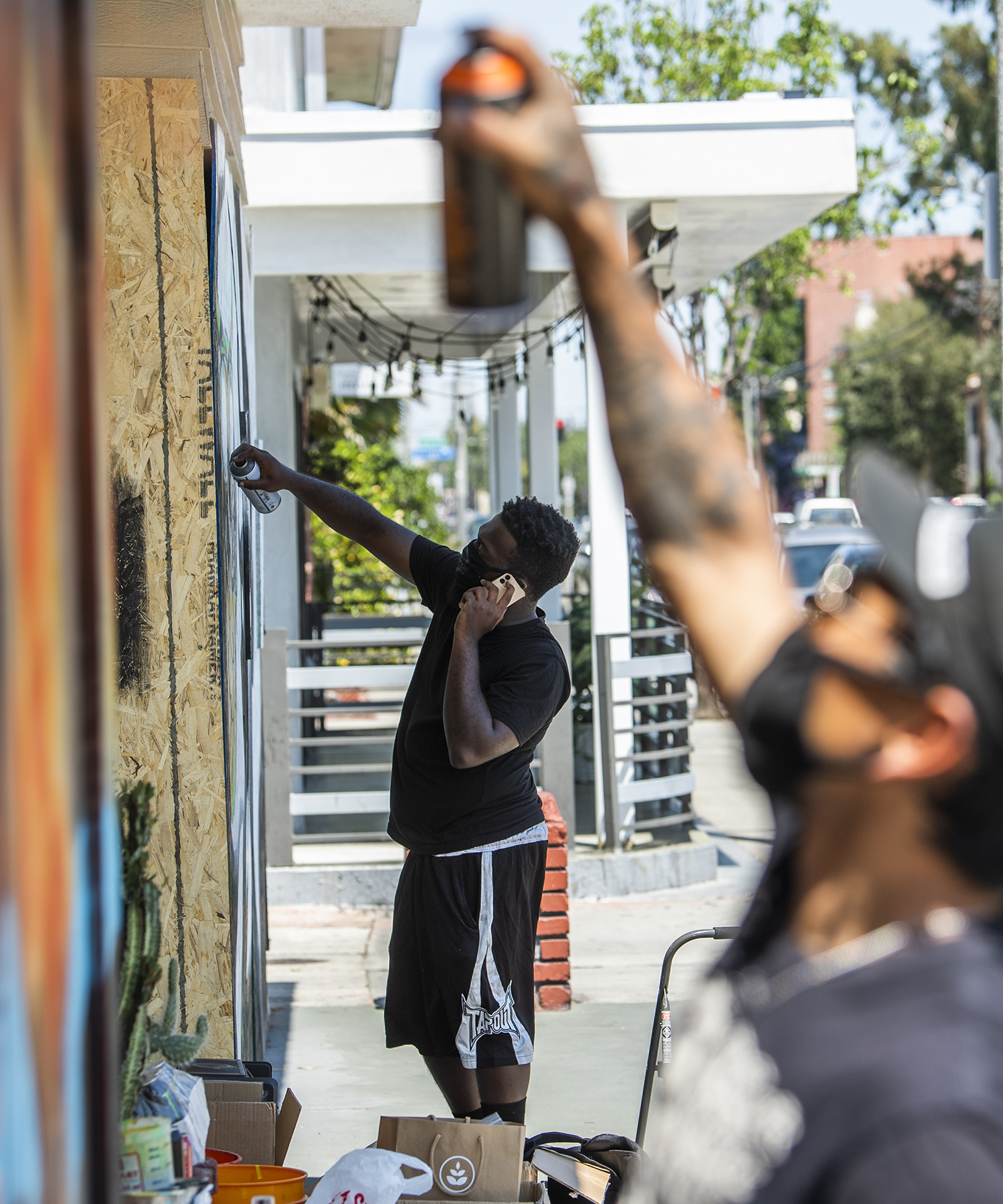 David Rodriguez, right, paints a muralon another boarded-up business next to Vlad Noel at the 1000 block of East 4th Street in Long Beach Wednesday, June 10, 2020. Photo by Thomas R. Cordova.

A moment on The Promenade

Painting in front of The Ordinarie restaurant and The Raven and the Wolves tattoo parlor and gallery, Noel handed a can of red paint to a man sporting fuzzy unicorn slippers who had appeared abruptly behind him, complimenting Noel on his work and asking if he could help. Noel showed him how to use the can but the newcomer sprayed himself in the face.

“I thought that was it,” Noel laughed, recalling the incident. “He was coughing, spitting. I thought it was over. He left, came back with a different pair of slippers, cheetah print this time. He was like, ‘I’m more comfortable and confident in these.’ He grabbed the can and sure enough, he aimed it in the right direction.”

It’s those moments of genuine connection that can really change an area, that motivate Noel to not only continue painting in public but remain open to interacting with would-be strangers: “That’s pretty much the vibe, if you’re just nice to people, [things] can go right. That’s how you build community.” 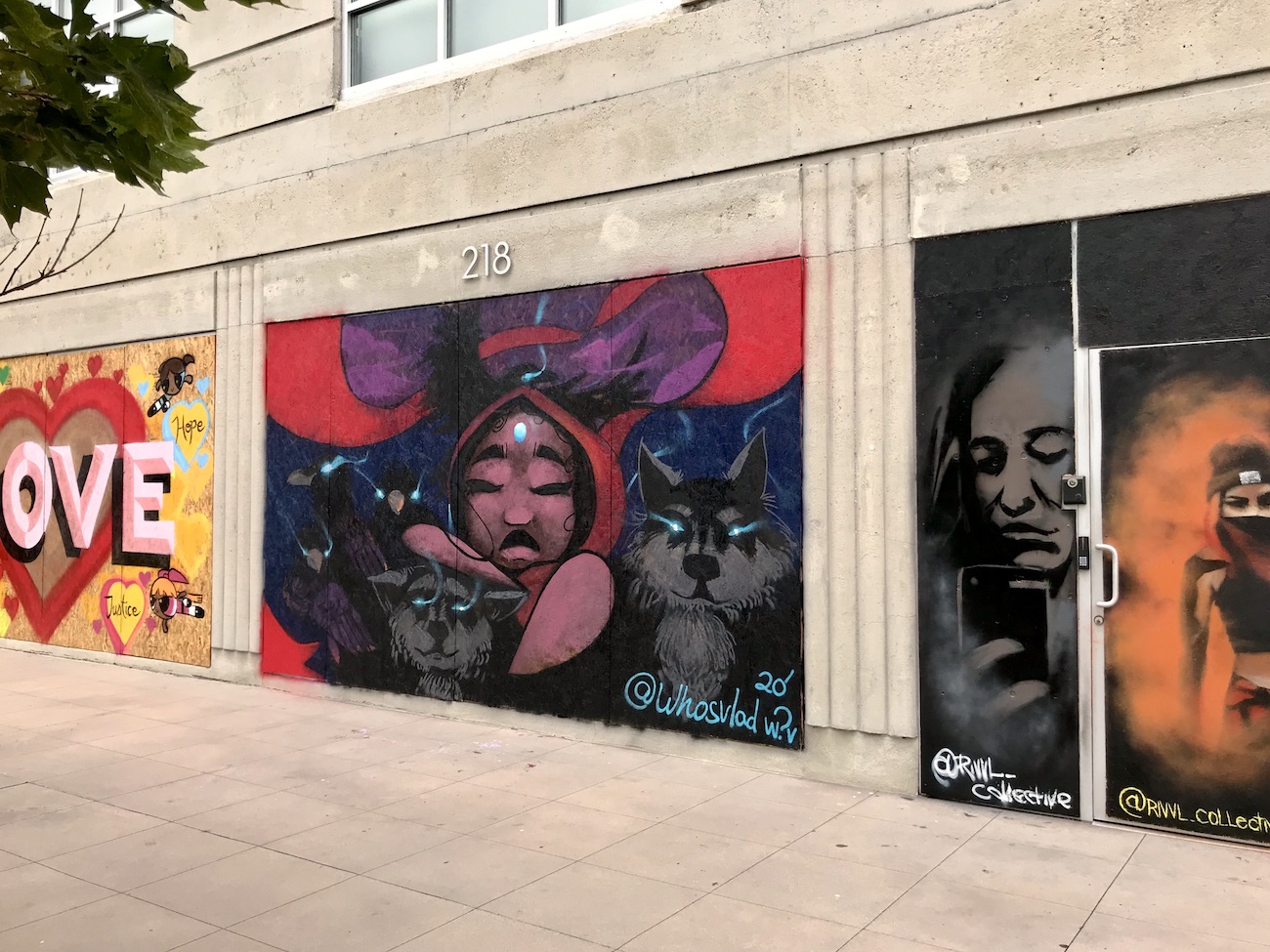 Mural on The Promenade by Vlad Noel (@whosvlad) next to a piece by David Rodriguez (@rivvl_collective). Photo by Asia Morris. 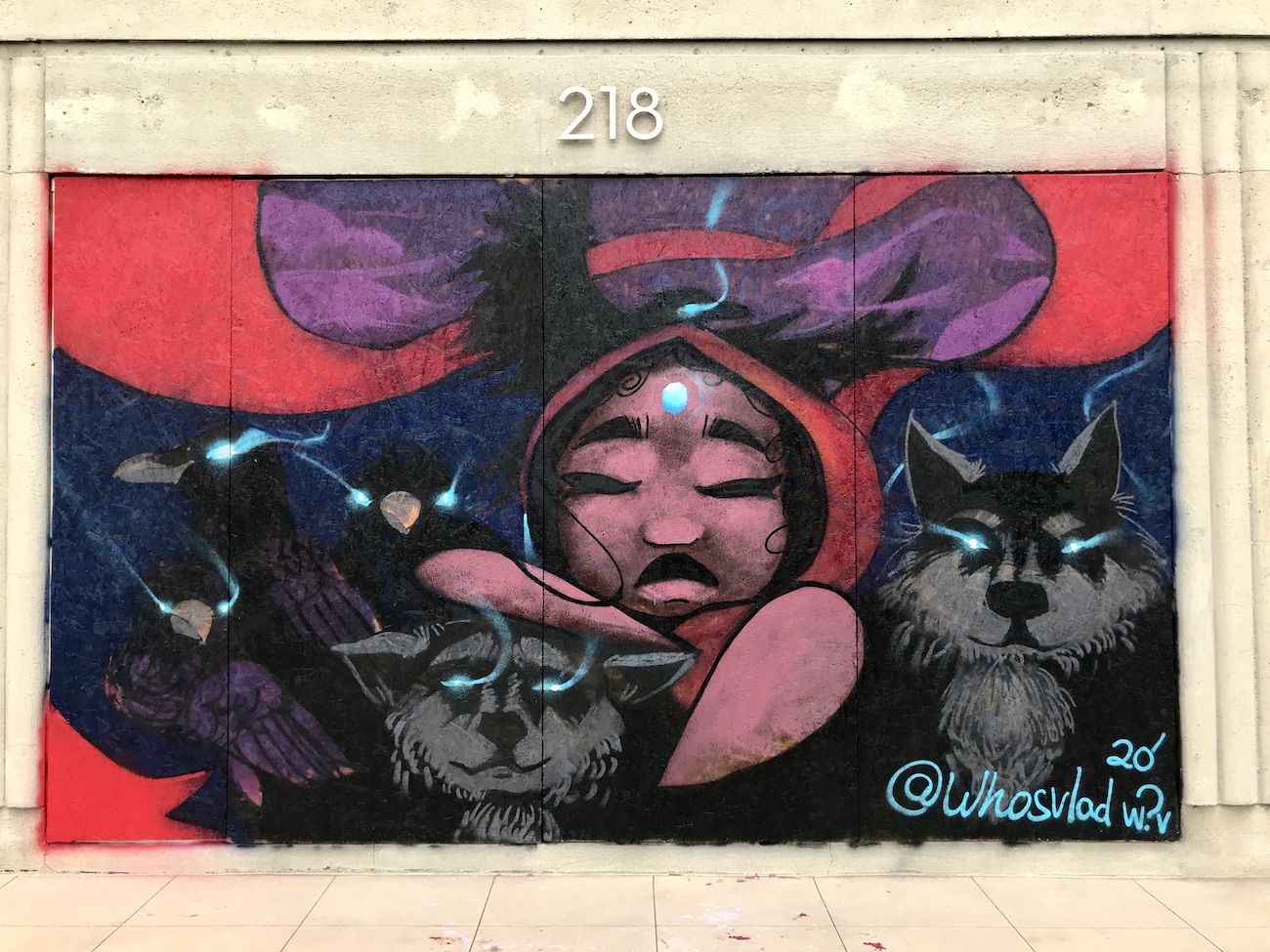 Mural on The Promenade by Vlad Noel (@whosvlad). Photo by Asia Morris.

“Him and his friends, they showed up, and were out here working in 90 degrees until midnight,” said Christy Caldwell, owner of The Ordinarie. “They were just dedicated to their art.”

Caldwell was at The Auld Dubliner when it reopened last weekend, and said Noel came up to him asking if he had any boards to paint. Little did Noel know, Caldwell had found out about the artist and had already planned to reach out: “By the time I got back to The Ordinarie they were setting up and starting already.”

Noel will use whatever donations come in to continue buying art supplies, to continue painting boards. As far as the finished plywood murals, Noel said he has no intention of selling them, that for this particular project, it’s not about the money.

“They [the artists] all have their reasons, they all have their messages that they want to get out,” Noel said. “But ultimately, together, we’re sending out a whole different message that no one was really prepared for.

Genuinely people have cried to us, people have come up and hugged us. When someone comes up to you crying and telling you how depressing this is and what happened in their past and how no one took the steps to do this and now we’re doing this… it means the world to a lot of people.” 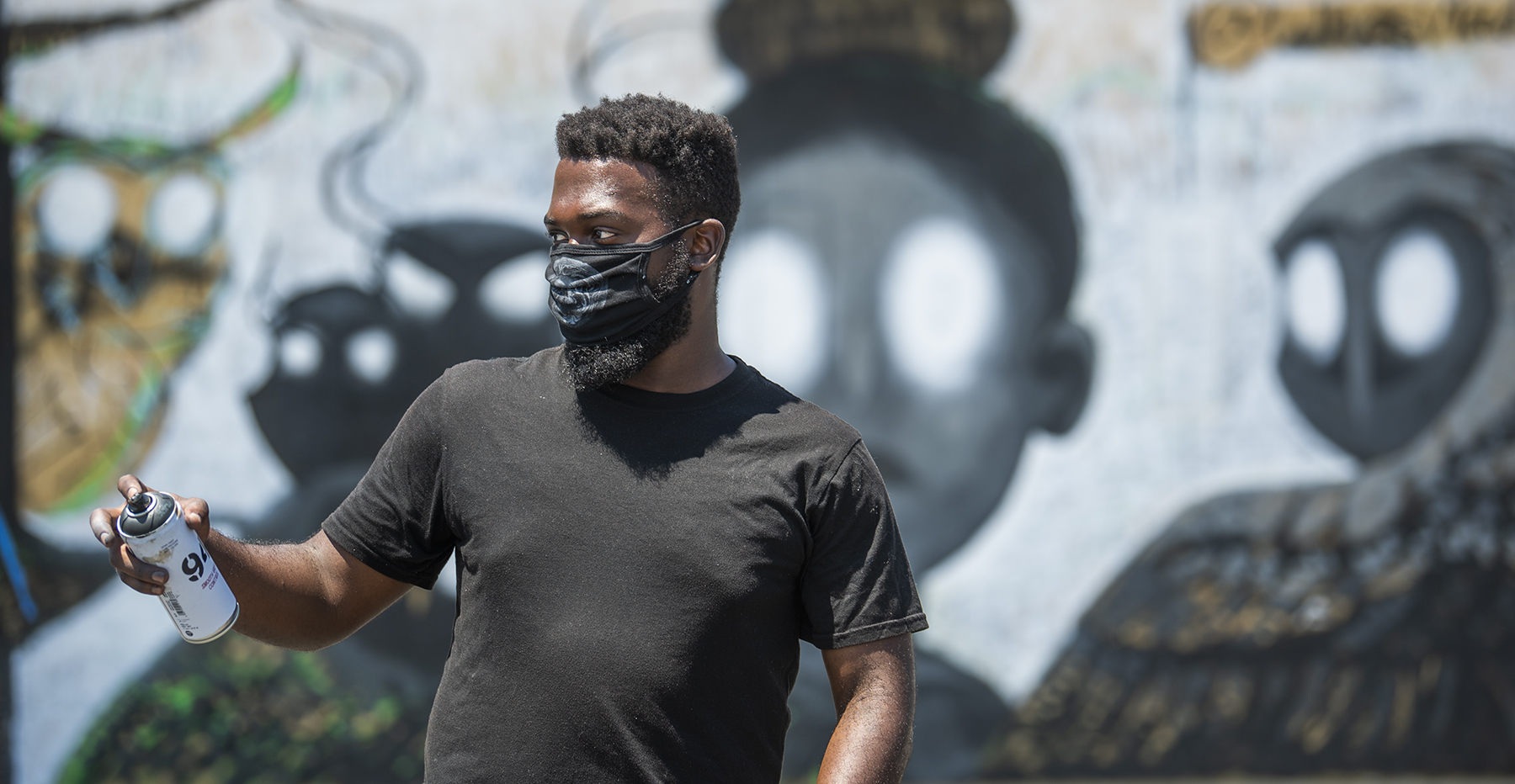 Vlad Noel crosses the street to get an overall look at his progress as he paints a mural on boarded-up business, Play Nice, at the 1000 block of East 4th Street in Long Beach Wednesday, June 10, 2020. Photo by Thomas R. Cordova.