His window cost $500 to replace but he got $10K from the community, so he paid it forward • the Hi-lo Support our COVID-19 coverage with a tax-deductible donation — Click here
- ADVERTISEMENT -

The morning of May 31, after hearing that a large protest was being planned in Downtown Long Beach following the killing of George Floyd, Recreational Coffee owner Bobby Hernandez was shocked when he started looking up cost estimates for boarding up his windows.

“There’s unfortunate negativity attached to something as beautiful as a protest that fights for Black lives,” Hernandez said. “Part of that is the possibility that rioters could break into your shop. You start to see other businesses begin to board up and you ask yourself if you should be doing the same—but they were charging an arm and a leg.”

The time frame didn’t help: With just a handful of hours to get it all done, Hernandez admits there was “likely a sense of opportunity” being taken by groups handling the boarding up of windows across the Downtown area—hence quotes that run into the thousands of dollars, even for a small storefront like Recreational—and with an insurance deductible that was significantly cheaper, he felt he might as well just take the risk of a window getting broken.

And it did. It cost $500 to fix, much to the relief of Hernandez and the entire Recreational crew. But what happened after that turned one broken window into a much larger story.

“I didn’t want to make a big deal about it, I’ll be honest—we got our window busted, it was likely to happen because we didn’t board up our windows,” Hernandez said. “Everyone saw the community the next day: Cleaning up, helping out… What happened to us was fixable, it was easy, it wasn’t on the level of a lot of other businesses.”

But fans of the coffee shop still wanted to help. From “Do you have a GoFundMe?” to “How can I just send you money?” Hernandez’s direct messages were “blowing up nonstop” from customers both local and abroad wanting to know how they could chip in. So he decided to give a few that opportunity by handing out his personal Venmo account.

“We really wanted to let people know that there was no pressure—we’re still open, we still love you, and we aren’t asking for anything,” Hernandez said. “Some just really insisted on giving.”

Within two days, his Venmo information had been shared well beyond the phones of his most loyal patrons, from out-of-state supporters to companies that weren’t even coffee-related. The donations began piling up, forcing Hernandez to make a choice. Announcing on Recreational’s Instagram that they had received more than enough to replace the window—by this point, the total was nearing $10,000—he decided to do what he felt was right: Give every cent beyond the cost of fixing his storefront to help other Downtown businesses in need of repair or financial support. 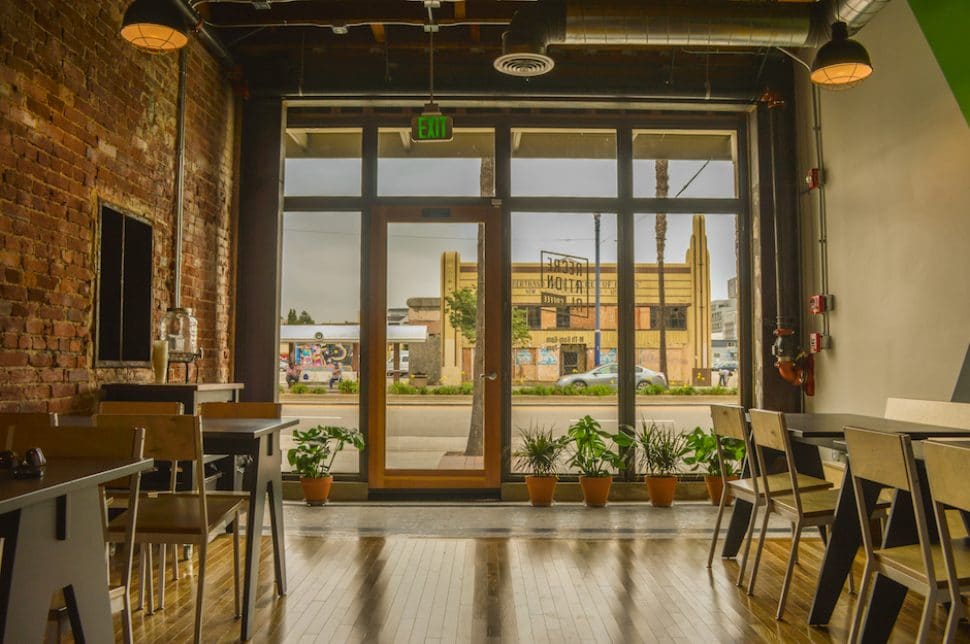 “It really hit me that I made the choice to not board up and for some business owners, I don’t think there was much choice there,” Hernandez said. “Everyone who had to replace windows were like, ‘We’re good, it’s gonna be OK.’ But for those that invested in boards: You’re sitting here, looking at your neighbors doing it, and you just feel like you need to compulsively act. Some businesses spent more on those boards than they would have replacing windows—and it’s not like these boards are returnable for some type of refund. You’re stuck with them. So I wanted to help out.”

Approaching Chef Dima Habibeh and her husband Sam, owners of Ammatoli on Third Street, Hernandez bluntly asked them how much they spent on boarding up the restaurant. It was nearly $4,000.

“Dima was in a panic. She said, ‘I wasn’t even thinking of insurance or how it would cover it. It was just an impulse decision,'” Hernandez said. “That was just out of their pocket. I told them the situation: I have a lot of money and it’s not mine; it’s the community’s. They wanted to rally around a cause and I am simply the one to pass it around. I know every business owner is always reluctant to take money—so I had to make sure they understood that it was the community’s money specifically for them.”

Other businesses that received support included Yoga 108 and Portuguese Bend Distilling. Hernandez approached Lupe’s De La Mar, but owner Jason Witzl turned away help since he already had support from his family. So Hernandez continued making rounds in an effort to pay it forward, until every cent had been given.

“I was super bummed—we were already struggling with the COVID stuff and then we had to drop thousands to board up,” said co-owner of Portuguese Bend, Luis Navarro. “The dude just started calling around downtown businesses that were affected financially by the riots—all out of kindness and love for his community. It gave me goosebumps.”

They support each other continually and this gave Hernandez a chance to keep that support going in a time where a pandemic has rattled small businesses nationwide.

“I know money makes some people think or act differently but I have always been pretty transparent with it,” Hernandez said. “There was no way I couldn’t give this money back to the people who make this neighborhood what it is.”