The Long Beach City Council on Tuesday voted to implement its Safe Streets plan, an innovation attached to the worldwide Vision Zero movement aimed at reducing traffic deaths and injuries.

The council’s decision makes Long Beach the 12th city in the state to implement a Vision Zero plan, which carries a simply stated goal: to achieve a highway and arterial system with no fatalities or serious injuries in traffic.

The move was a longtime coming, according to 2nd District Council member Jeannine Pearce.

“We have discussed Safe Streets at every community meeting in some capacity,” she said. “And I know it has taken years of development to get to this point but it truly is a step forward in safety. Now, we have to focus on implementing actions.”

The Long Beach-specific project has been in development since 2016, with hopes to achieve zero pedestrian and bicyclists deaths by 2026. It was initially launched by former Council member Suja Lowenthal as traffic fatalities began to slowly climb beginning in 2013.

Graphic courtesy of the City of Long Beach.

City officials estimate the cost of fatal collisions and those that resulted in serious injury between 2013 and 2017 was collectively $1.46 billion when taking into account things like medical care, emergency services, property damage and lost productivity.

At Tuesday’s meeting, 7th District Council member Roberto Uranga noted that Santa Fe Avenue, which runs on the west side of the 710 Freeway, has been the sight of five fatalities over the past two years in his district, but he said attempting to get traffic calming elements has proved futile because of state regulations that force traffic engineers to accommodate the flow of cars more than all users of the road.

“These crashes have heightened the need for safety,” Uranga said. “I have constituents who are getting frustrated because the fatalities are happening near places where people have to cross the street for things like a market and there is nothing that protects them—no crosswalk, no light, nothing. … If I sound frustrated and angry, it’s because I am, because my constituents are frustrated and angry.” 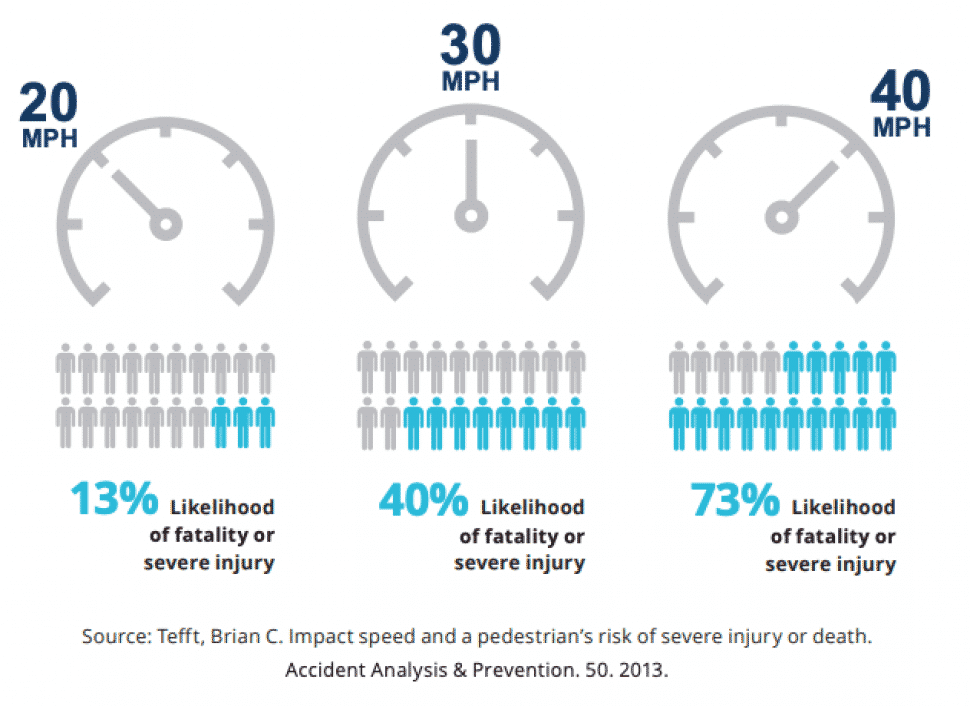 Graphic courtesy of the City of Long Beach.

This also does not mean the meeting was not met with its detractors, particularly James Raschiella and Ann Cantrell, the two residents who withstood the meeting’s 6-hour-plus length to publicly comment.

Raschiella encouraged the council to hold off on taking any action until 2nd District council candidates Cindy Allen or Robert Fox are officially elected, permitting the district of his residency to directly work with the newly minted councilmember.

“There is enough controversy surrounding road diets and the Vision Zero program that it would be in the best interest of the people of Long Beach to postpone action on this item until after the November election,” Raschiella said. “I am a resident of the 2nd District that has been directly affected by the modifications to the Broadway Corridor. I am especially interested to see the city remain uncommitted on this issue until after either Mr. Fox or Ms. Allen is elected, as they hold largely opposing positions on the benefit of the modifications and their debate should benefit citizens of all districts.”

Cantrell noted, among other things, concerns over costs and emphasized that her version of a safe street is one that is safe for cars, such as fixing potholes.

“My idea of a safe street is one with no potholes,” Cantrell said. “So I would suggest, as some others have indicated, that you postpone approval of this plan until there’s a lot more information about where the money’s going to come from.”

What does a plan like this involve and how does it get implemented? The Safe Streets project can be broken down into five main points:

This ultimately means designing streets for all modes of travel, increasing funding for bicycle and transit projects, focusing law-enforcement at high-risk activities and high-danger corridors and finding ways to slow car traffic. Speed is a major factor in how badly someone is hurt during a crash. If a pedestrian is stuck by a car traveling 40 mph, they have a 73% chance of dying or sustaining a life-altering injury; there is an almost-guaranteed death if they are struck by a vehicle going 50 mph.

What makes Vision Zero appealing for municipalities is the data attached to its success: Beginning in Sweden in October of 1997, the country has since cut its traffic fatalities dramatically even as the number of vehicle miles traveled has increased. Another prime example is Oslo, with nearly 200,000 more people than Long Beach, achieved zero pedestrian and bicyclist deaths by traffic violence in 2019. Also, no children were killed. There was one death, that of a driver who had collided with a fence at Skillebekk in June of last year.

Editor’s note: This article has been updated with quotes from concerned citizens that spoke at council.