For three-quarters of a century, a large, attractive beach house stood on the north side of Ocean Boulevard with sweeping views of the ocean that could be enjoyed by the home’s owners from any number of its windows, which were provided by architects Hugh R. Davies and Harvey W. Metcalf, with more than a little assistance from the wife of Dr. M.B. Huff who wanted a somewhat softer version of the then-popular Craftsman style, with fewer strict horizontal lines, for the couple’s home.

The Huffs moved into their home by the sea with the intention of living there in their declining years while maintaining a residence in Corona that they rarely visited after enjoying their home in Alamitos Beach.

While the location was initially ideal, over time it became less so, especially as the 1990s loomed and highrises began to move into the neighborhood. The old Huff place had fallen from grace, serving as a fraternity house for a while, and suffering from neglect and an overabundance of paint that was slathered on to give the impression of a bit of upkeep.

In the late 1980s, it was put on real estate death row, scheduled for demolition—unless someone wanted to pick up the two-story, 4,667-square-foot home and move it off Ocean.

The home’s reprieve came when Wendy Harn, an LA County Sheriff’s data officer, agreed to take the home and move it to a piece of land she owned on Second Street in the historic Bluff Heights neighborhood.

The home-moving crew urged Harn to allow them to saw the house in two in order to more easily move it a few blocks and a couple of turns to its new location. Harn insisted on moving it in one piece, which increased the cost by trimming trees, swinging street lamps out of the way and raising cable TV lines along the route. The cost of the move, which crawled along the less-then-one-mile route along Ocean, Junipero Avenue and Second Street for more than six hours, was about $150,000.

It was the beginning of a decades-long restoration of the house by Harn and later with her partner, interior designer Sasha Witte who joined her in 2005. Work included just about everything, from new plumbing and electrical to stripping paint from walls and wood, removing drywall, which had covered things like wainscoting and art windows—one of which was a depiction of the Huffs’ Corona home. 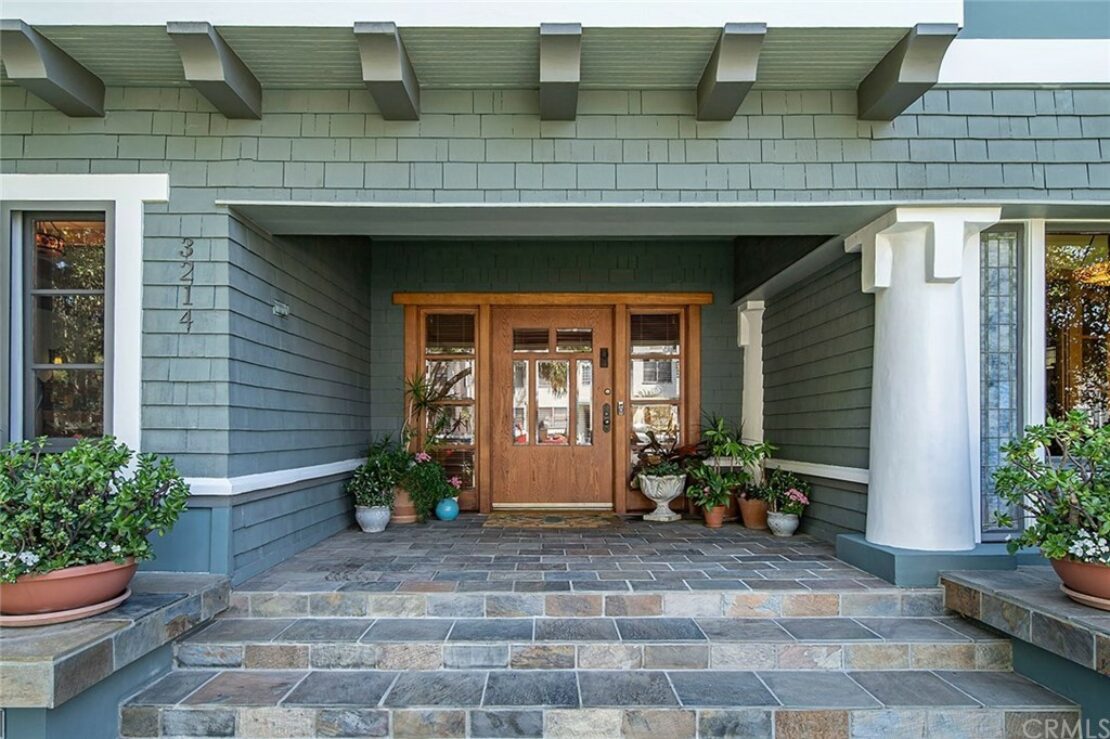 The front of the relocated home. Photo courtesy of Loree Scarborough.

Later, air-conditioning was added, landscaping was finished and the kitchen was thoroughly upgraded.

After intermittent delays due to money shortages, the women finally finished the home after spending more than $600,000 in the effort. The couple also won a Long Beach Heritage award for their work.

Now the residence, along with a four-unit apartment building at the rear of the lot which Harn had purchased before acquiring the Huff house, is on the market, listed by Realtor Loree Scarborough at $3.459 million.

“The home is unique because of the moving,” said Scarborough. “And they’ve been working on it so diligently, making sure that it was historically accurate.”

It’s difficult to determine the centerpiece of the home, but a contender would be the elegant, quarter-sawn oak staircase that spirals up from the foyer. To its left, you enter the bright and airy living room with a striking blue-green-tiled fireplace bracketed by wooden built-in bookcases beneath the walls allowing light through art-glass windows, while the wood beam ceiling soars above, illuminated by Mica chandeliers. It’s an absolutely perfect space that would be difficult to leave. 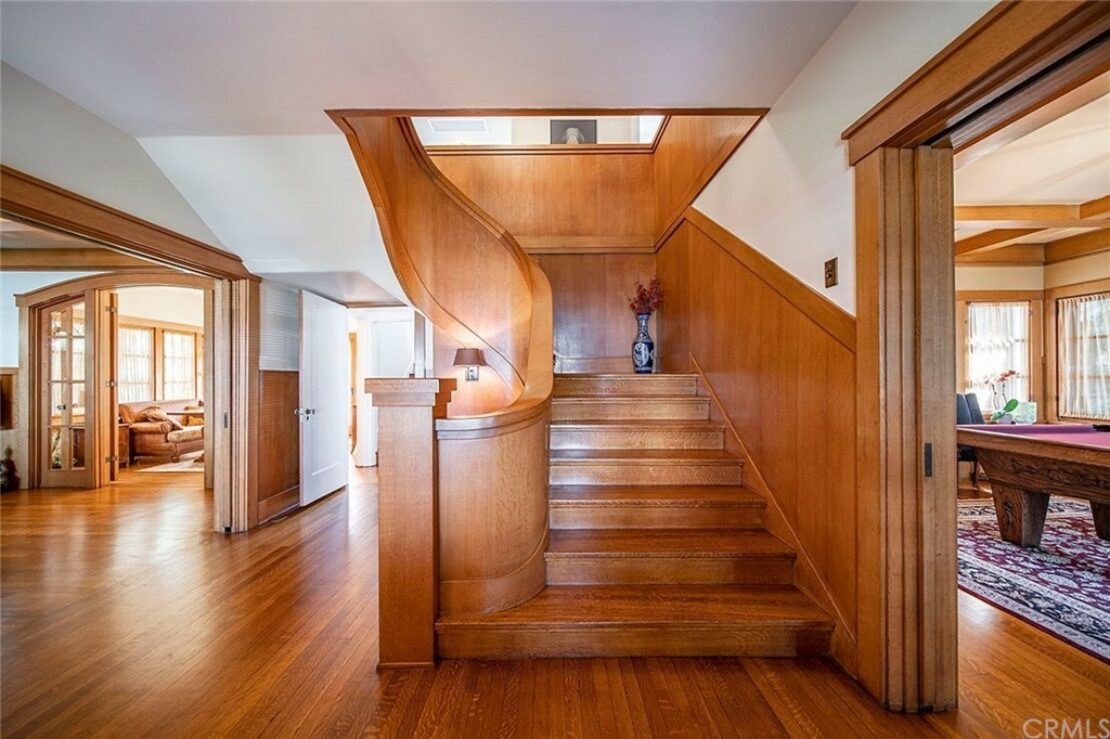 The oak staircase leads up from the foyer. Photo courtesy Loree Scarborough.

The upstairs bedrooms have also been handsomely restored and feature banks of windows from which you can see the lushly landscaped backyard gardens.

The backyard is shared a bit with the neighbors in the rear units, though the landscaping allows for ample privacy between the tenants and the homeowners.

Two of the four apartments are studios and two are one-bedroom units.

Scarborough says the longtime current owners are selling in order to travel and move along to a new home.

“They absolutely love the house,” she said, “but they feel it’s time to pass it along to a new buyer who will love the home and keep it as nice as they’ve made it.”

A classic and familiar Bluff Park home hits the market at $2.25 million