The home at 2303 E. Ocean Blvd., fresh on the market and listed at $2.25 million, is one of those magnificent and venerable old houses that you’ve seen frequently on your travels along the coast in Bluff Park.

Guarded at the foot of the sidewalk leading to the entry by a brace of concrete lions, the house is in the Bluff Park Historic District, perched on the southeast corner of Kennebec Avenue and Ocean, just across the street from its architectural cousin, the Long Beach Museum of Art, formerly the Elizabeth Millbank Anderson House.

According to a history of the house written by Maureen Neeley of HouStories, the home was built in 1911 for David and Mary Shoop, a couple with strong ties and standing in their hometown of Wauscon, Ohio. They had the house built for a winter retreat, which was a common use for many of the early homes that would follow in what’s now the Bluff Park Historic District.

Although the Shoops owned the home through 1934, they ceased visiting it after 1929 and it often stood vacant in their absence, or it was occupied by renters. 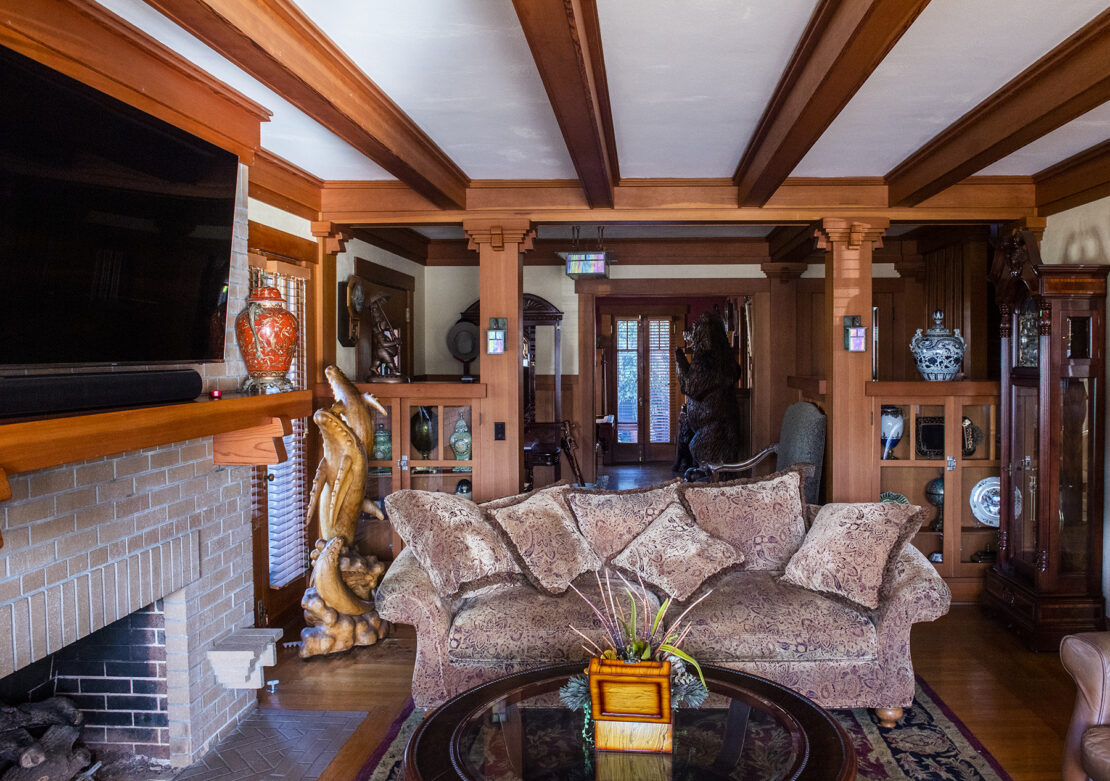 The living room with warm tones of redwood in this 110-year-old Bluff Park home. Photo by Thomas R. Cordova.

Another couple, William Book and his wife Clara bought the home in 1934 when William retired from his work in Indiana and moved to Long Beach at a time when midwesterners were coming to the coast in large numbers.

The Books improved the home, adding and upgrading bathrooms and building a master bedroom at the front of the house. Clara continued to hold onto the house after William died in 1940 and, though she moved out in 1942, she rented the house out to another series of residents until 1950.

The next few owners didn’t do much to improve, or even preserve, the home for the next 25 years and it was in danger of being demolished until a couple, Realtor Michael Anderson and accountant Jerrell McElroy, bought the home in 1975 and transformed it into the extraordinarily beautiful showcase that it is now.

In restoring the home, the couple visited lumber yards and other sources for clear redwood that they used in beams, doors, cabinetry and walls throughout the house. The wood is absolutely flawless in quality, with its straight and uniform grain that is so perfect that it almost seems fabricated. 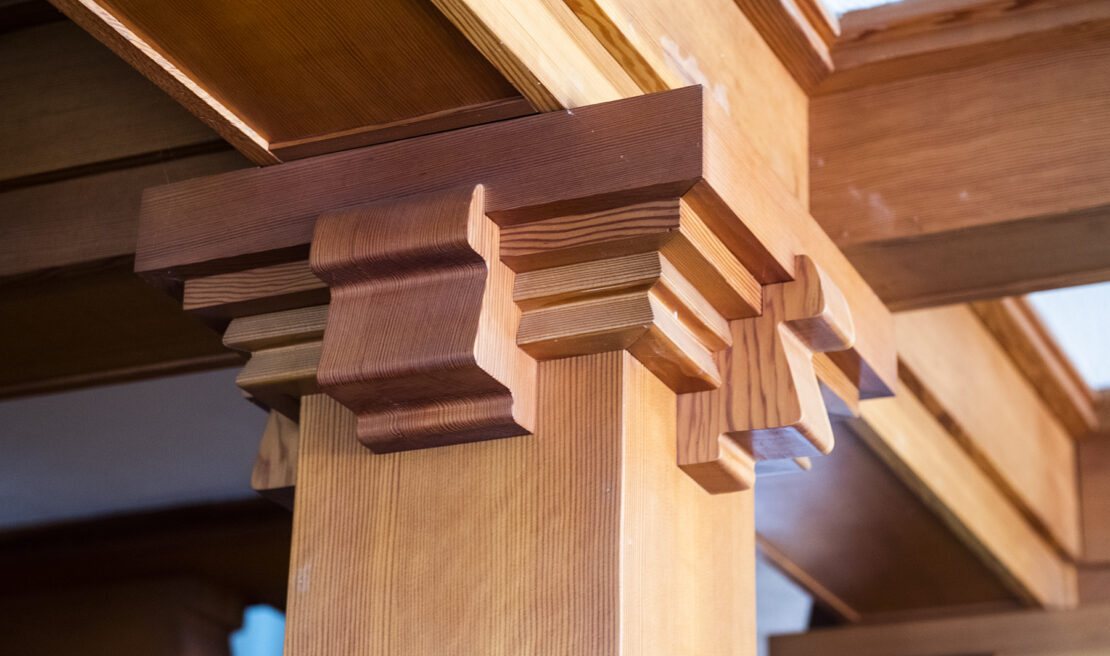 A detail of the woodwork inside the home at 2303 Ocean Blvd. Photo by Thomas R. Cordova.

“I have a friend in the construction business who said it would cost more than $1 million to do that job today,” said listing Realtor Jim Sallinger. “And that’s if you could even find wood this good these days.”

In the entire 2,729 square-foot home, there are only two knotholes to be discovered in the wood, and once you stumble upon them, you can’t unsee them. “They add character,” jokes listing Realtor Jim Sallinger.

McElroy and Anderson did considerable additional work on the house, including jacking it up in order to rebuild its foundation and adding an upstairs master bedroom that runs the entire width of the house.

Their work made the house the showcase that it is today. The two died of AIDS or complications from AIDS: McElroy in 1991 at 52, and Anderson in 1993 at 42.

The home was bought by its most recent owners, Walter Wojack and Melinda Roney in 2004, and it was in good hands, with the owners being avid preservationists. Roney was involved in several preservationist organizations and was president of Long Beach Heritage from 2011 through 2014. 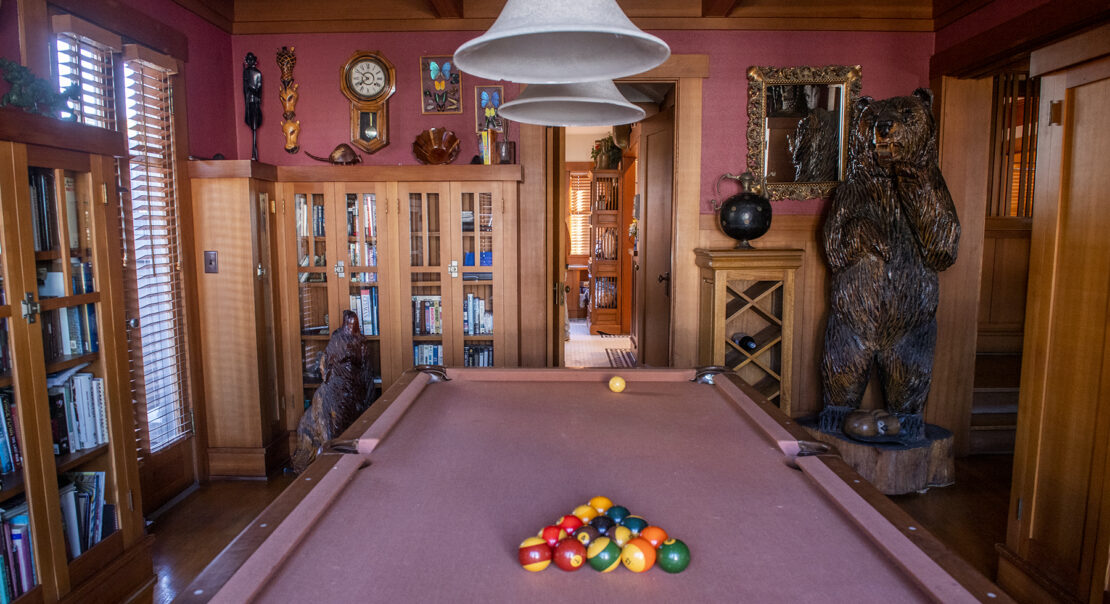 The game room near the rear of the house in the 110-year-old home in Bluff Park. Photo by Thomas R. Cordova.

The home is being sold by the family trust, which includes Melinda’s son John, who is visiting Long Beach from his home in Atlanta (along with his dog Reggie).

Although he didn’t grow up in the house, John said he visited often: “This was the headquarters for all family get-togethers,” he said. “There are a lot of great memories here. It broke my heart to see the for-sale sign go up.”

The home’s architects and constructors were Meyer & Holler, a team responsible for the current Long Beach Museum of Art, built one year after the 2303 Ocean Blvd. home. The team also did Hollywood’s Grauman’s Chinese Theater and Downtown Long Beach’s Ocean Center Building and Walker’s Department Store.

It is largely of Craftsman design, with a strong influence of Swiss Chalet style, much like the museum across the street.

It’s full of the charming trappings that you find in the older fine homes; things like toe-kick draws, hidden spaces accessed by pushing panels, little cubbies and a hidden wet bar in the pool room that includes a speakeasy window allowing you to see who’s outside on the entryway. It’s likely the new owner will spend a lot of time discovering new (old) features throughout the home.

If you require more than the home’s three bedrooms and four baths, there’s still plenty of space behind the home to add on, and, because it won’t be visible from the street, you might not need to adhere to the restrictions that come when you buy in a historic district.