Casa el Sueño (“The Dream House”), as a plaque out front declares it, is at the northern end of Los Cerritos’ Pacific Avenue before the street T-bones into Country Club Drive. Pacific is a wide and quiet avenue at this point, lined by super-tall palms and eucalyptus trees and elegant estates. The money in this neighborhood is old money, passed down from 1930s oil families, doctors, bankers and senior law partners.

Casa el Sueño, at 4282 Pacific Ave., was built by famed Pacific Northwest architect Kirtland Cutter, who designed scores of buildings and residents in the Spokane area as well as a number of homes in Palos Verdes and Long Beach, in the Bluff Park and Los Cerritos neighborhoods, including the John Clock House at 525 Devon Place, and the Thomas Rowan House on Linden Avenue, which was once owned by Gemini/Apollo/Skylab astronaut and McDonnell Douglas vice president Pete Conrad. 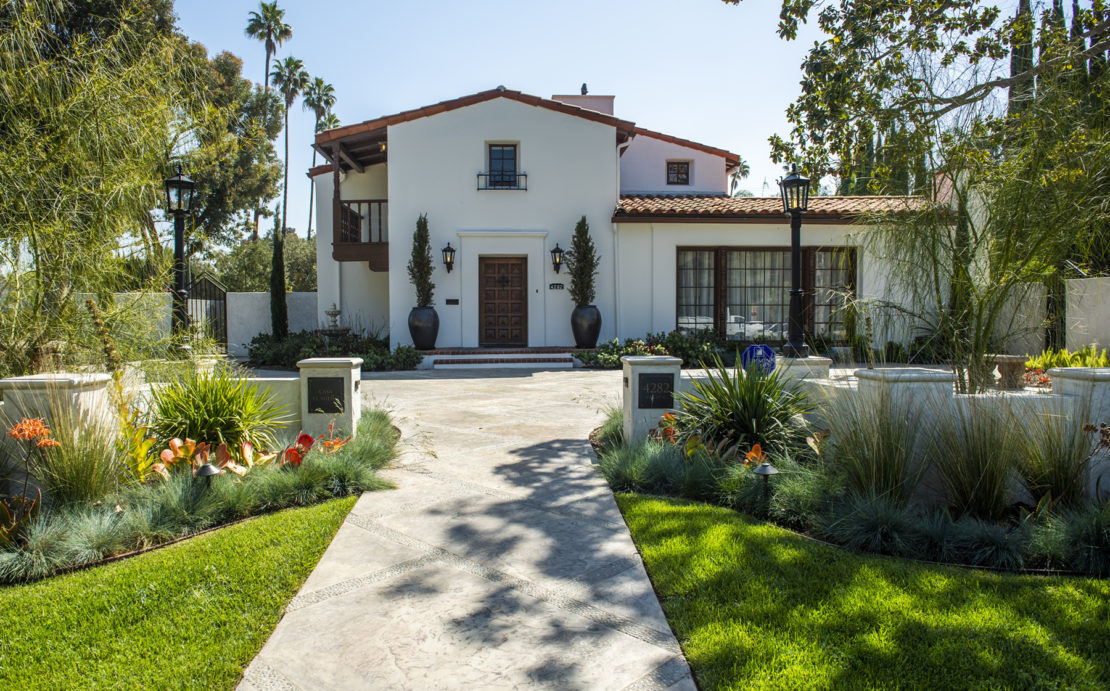 Cutter built the home on Pacific for Donald P. Condit, the son of Fillmore Condit, a wealthy businessman, former mayor of Long Beach and founder of Community Hospital.

If your dreams run along the lines of an Andalusian villa, or perhaps a Tuscany country estate, you’ll be happy in this home, listed by Robert Martin, of Compass, for $3.295 million.

Cutter’s timeless architecture remains intact after all these years and much of the interior of the home has original details. Most of the hardwood plank flooring is original, says Martin, as are the solid mahogany doors and other wood trimming.

“It was originally a seven-bedroom home, but two of the rooms were converted into a family room,” he said. So now it’s a five-bedroom, five-bath house in 4,462 square feet on a half-acre lot.

The reception courtyard and gardens lead to an open-beam foyer, and the formal dining room takes you to a private fireside terrace.

There’s a lower-level guest bath and a guest room with its bath. A gourmet kitchen with top-dollar appliance and custom cabinetry opens to the family room. 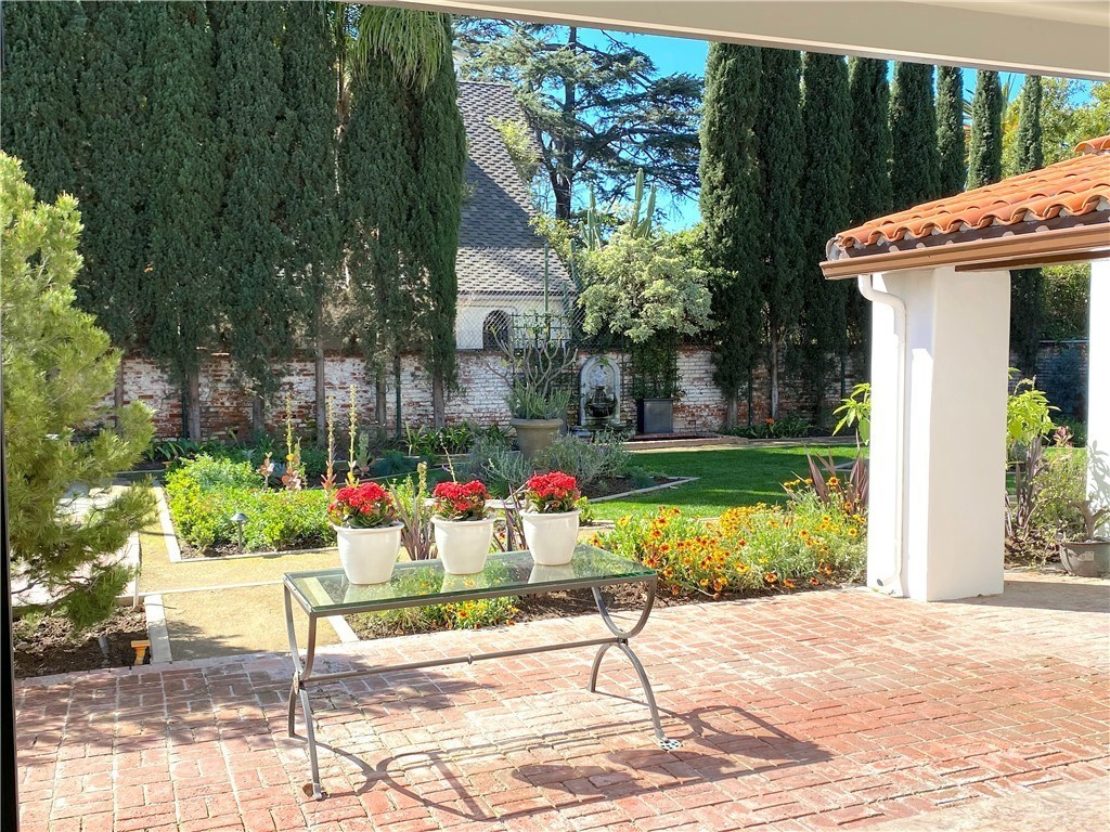 The patio and gardens in the back yard of the home at 4282 Pacific Avenue. Photo by Angus Chang, courtesy of Robert Martin.

On the upper level, one bedroom features an elevated library, and two bedrooms open to balconies overlooking the grounds. The hall leads to a coffee/beverage lounge, and one of the home’s two laundry areas. The master suite has a private bathroom, a dressing room, two closets and the bedroom chamber with views of the golf course. The rear yard features a fountain koi pond, pool, patio, a wet bar, cabanas and a vegetable garden.

Further, the home comes with a pedigree. One of its earliest owners was a man whose name isn’t well known these days, but in his prime, which would’ve been in the late 19th century, Elon Carlton Denio was regarded as “Mr. Long Beach,” a title that was devoid of hyperbole. Today, the title is handed out like chewing gum, but Denio was undeniably deserving of it.

He was the city’s first attorney and its first city attorney. He was elected to the city council in 1891, was chairman of the board of trustees (the equivalent of mayor) and a charter member of Virginia Country Club. (The law firm he founded in 1891, is still in operation as Taubman, Simpson, Young & Sulentor, at 1 World Trade Center.)

Denio died at his home on Pacific on July 27, 1952, at the age of 87. At his funeral, Rev. William Harrison Meyers, pastor of the First Methodist Church, said, “He belonged to a generation of rugged individualistic Americans who built cities and pioneered the west.”

Another Cutter next door

Turn the corner at Pacific Avenue and Country Club Drive, and you’ll find another Kirtland Cutter classic home for sale at 4286 Country Club Drive —apparently, there’s never been a better time to buy a Cutter casa.

This one’s arguably fancier and inarguably larger and more expensive than its Cutter cousin on Pacific. 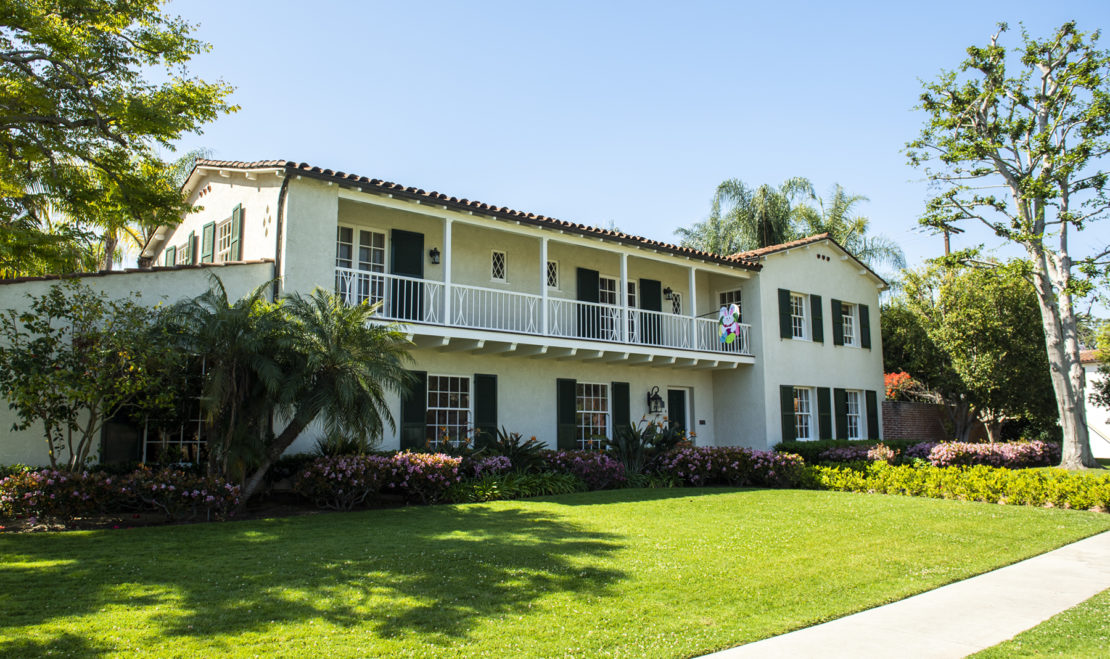 A beautiful circa-1930s Kirtland Cutter home at 4286 Country Club Drive home is on the market, listed at $3.6 million. Photo by Thomas R. Cordova.

Listed by Spencer Snyder at $3.6 million, the spacious six-bed, five-bath 6,600-square-foot villa stands on a tad more than a half acre of land that’s beautifully and companionably landscaped, divided into separate yards, enough to hold a couple of kids’ sports fields with plenty left over for a saltwater swimming pool and a secret garden with a fountain and a couple of chairs to escape the outside world for an hour or three. 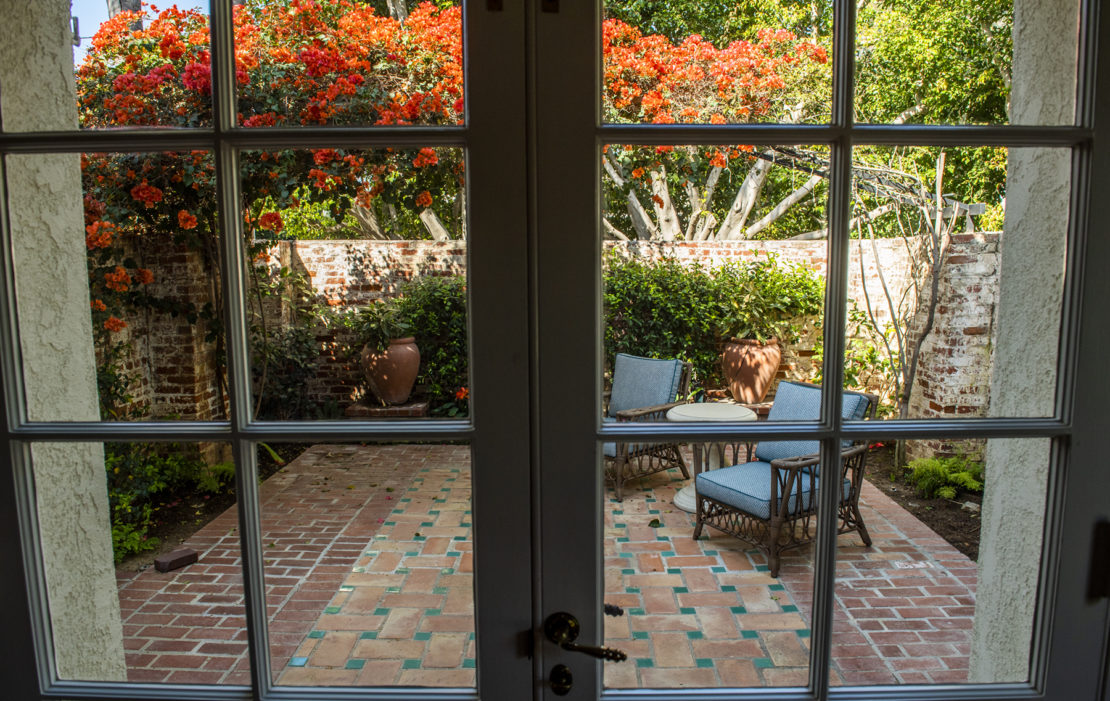 The home was built as an early-California style residence in 1929 at a cost of about $30,000—that’s a bit more than $400,000 in today’s money, which shows that investing in real estate is more lucrative than burying your money in your yard in coffee cans.

An early longtime resident of the house was Leland Edwards, who lived there with his wife Katharine from the 1930s through his death in 1963. Edwards achieved fame, and a little pocket money, by drilling, with his partner C.C. Rogers, the second oil well in Signal Hill before developing the early Seal Beach oil field.

The current owners are Jim and Renetta Haas, who raised two children in the home, “along with all their friends,” laughed Jim. “It’s really an entertaining house; we’ve had many, many parties here, and it was always filled with my children’s friends. A house is just a bunch of sticks until you get a family and a bunch of kids running around filling it up and enjoying it.” 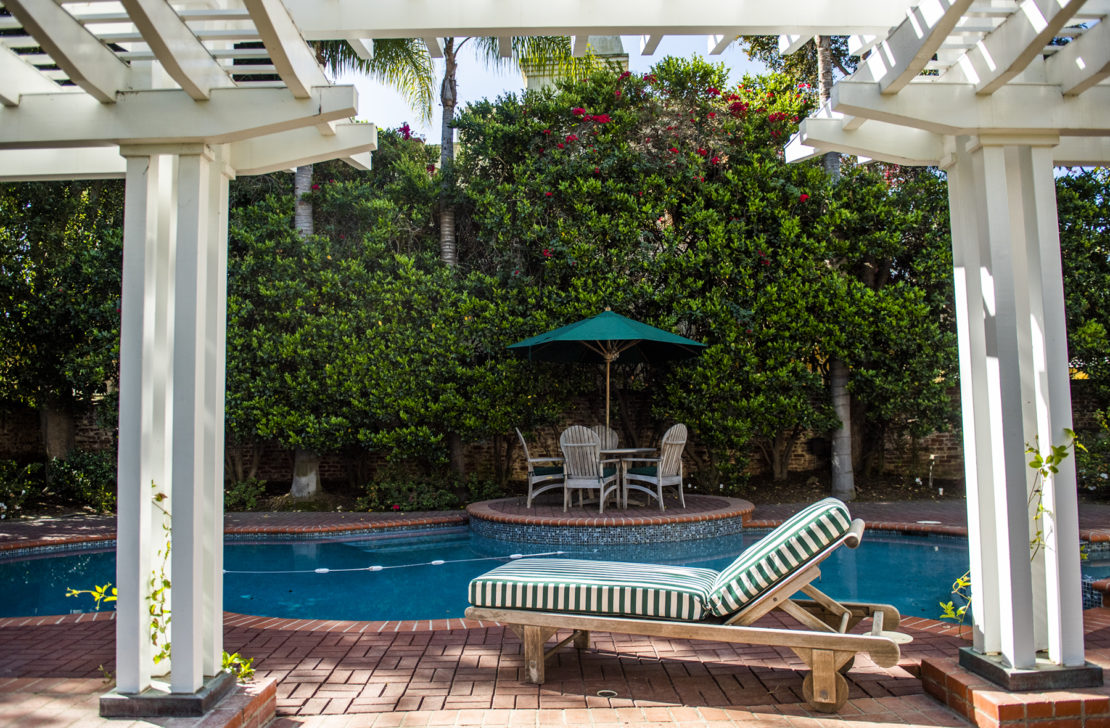 The pool and the lounge area at the Cutter-designed Country Club Drive home in Long Beach. Photo by Thomas R. Cordova.

The house has been well cared for, with many original details still surviving, although the kitchen has gone space age with above-top-of-the-line appliances, including several Viking stoves, there’s one in the butler’s pantry, too, not that the Haas’ employ a butler. In older times, wealthy homeowners had live-in help, and this house has bedrooms that at one time were used by maids, cooks, drivers, a butler and even a wet nurse.

For the most part, the home is largely how Cutter designed it. “We’ve tried hard not to change the house,” said Haas. And it only takes a bit of imagination (as long as you stay out of the kitchen) to sense what it must have been like living there nearly a century ago.

With an eye toward entertaining, Haas said, “I wanted to create a lot of conversation areas.” There is the living room/music room, the secret garden, little pods of chairs, lounges and benches in various spots outdoors, all in an exceedingly serene setting.

The house, like many of Cutter’s homes, has a basement. This one’s semi-finished with room for some gym equipment and floor-to-ceiling racks holding some 900 bottles of wine.

Wine anybody? Hundreds of bottles line the walls of the basement at this circa 1930’s home on Country Club Drive home in Long Beach. Photo by Thomas R. Cordova.

Soon, Jim and Renetta Haas will move into a new home in Rancho Santa Fe in San Diego County. Will he miss this place? He takes a moment to think, reflecting on his children and their friends and the near constant activity that’s prevented the home from becoming just a bunch of sticks.