A Killingsworth classic Case Study home in Naples for sale at $3.99 million • Long Beach Post News
- ADVERTISEMENT -
Help us light up the city; Add your home to the 2022 Holiday Lights map. CLICK HERE

Today you’re looking at what is probably the most impressive and highly honored home in all of Long Beach: Edward Killingsworth’s Case Study House #25, or the Frank House, built in 1961 for the fine furniture merchant and Killingsworth’s former classmate at Wilson, Edward Frank.

The Case Study House project was run by Arts & Architecture magazine from the late 1940s through the early 1960s. The magazine commissioned many of the period’s finest architects—including, besides Killingsworth, such notable Mid-Century Modern names as Richard Neutra, Charles and Ray Eames and Eero Saarinen—to design inexpensive and efficient model homes in Southern California to bring style and innovation to the post-war housing boom.

Killingsworth homes are scattered throughout Long Beach and they’re always hot properties, especially those with which he’s had an inordinately strong connection, such as his own home on Virginia Drive in Los Cerritos, which sold in 2019 for $3.3 million. Now add to that the Frank House, at 82 Rivo Alto Canal in Naples, which listed last week at just a shade under $4 million. There are currently four homes for sale in Naples in that price range; the other three cost more and are all larger than the Frank House and all less impressive, though fewer than a handful of homes in Long Beach could be said to be more impressive than the Frank House.

The three-bedroom, three bath canal-front home was designed expressly for guests arriving by water, tying up at the 40-foot dock on the canal. The water doesn’t end in the canal, as the approach to the entry takes you on raised platforms that seem to float on the  wrap-around reflecting pool that takes you to one of the house’s landmark features, a 17-foot-tall front door, which in itself is a structural feat. A wooden 17-foot-tall door would require more work than you’d be willing to put into the task of entering a room, and it would be prone to warping, as well, especially in such close proximity to water. To make the door doable, Killingsworth contracted with Northrop Aircraft’s Architectural Systems to build the door with a honeycomb core covered by specially constructed sheets of seamless aluminum. 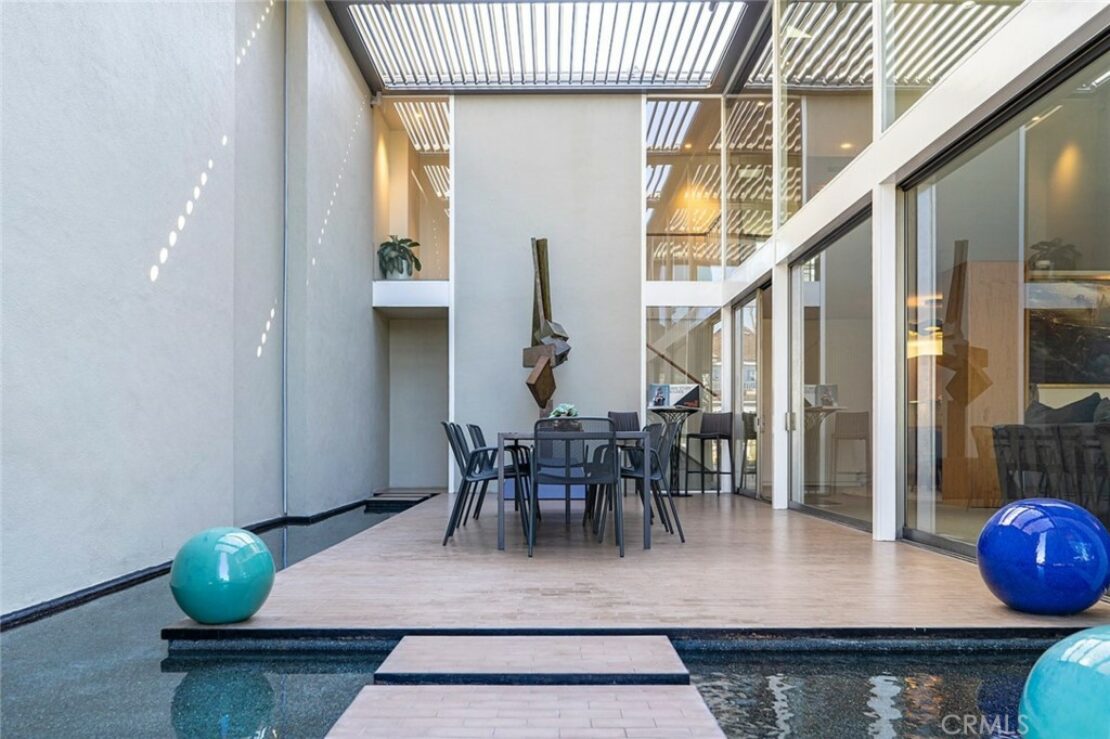 Once you pass through the door you’re treated to a two-story interior courtyard, alongside of which water from the outer reflecting pool runs while the interior side is a wall of glass between the courtyard and the living room.

The house is classic Killingsworth throughout and is largely the same as it was initially designed save for upgraded HVAC and electrical. The architect did not suffer alterations gladly and frequently disavowed homes and other buildings for modifications or alterations he deemed to have strayed from his design.

Case House #25 is designed with his trademark rectilinear design, horizontal lines are found everywhere, with not so much as a curve in sight. Glass, too, abounds in classic Mid-Modern fashion, bringing the elegant landscape indoors along with beautiful views of the canal, especially from the upstairs primary suite. 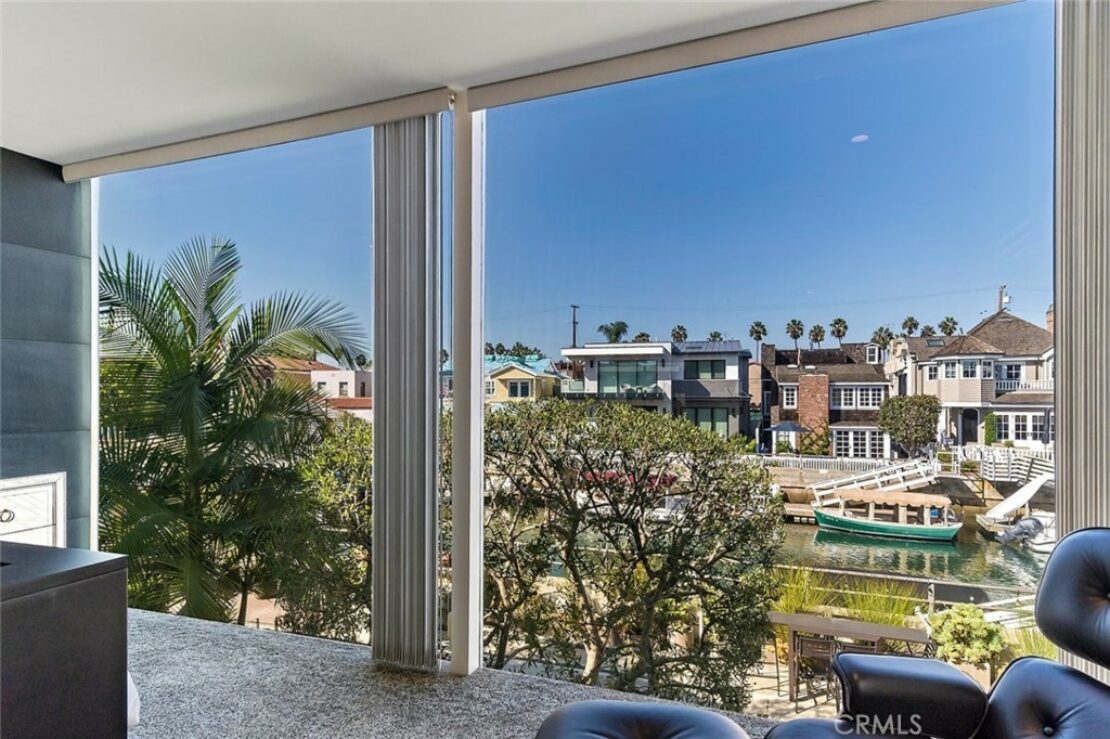 The view from the Primary bedroom. Photo courtesy Elaine Ross.

The fact that the home was built for Edward Frank is appropriate because Edward, along with his brother Maurice, owned the Frank Bros. furniture store on Long Beach Boulevard, which became the go-to store for Mid-Modern furniture throughout the 1950s and 1960s, which the brothers introduced to Southern California through their buying trips to collect Danish and Scandinavian pieces. Their furniture became the definitive look of Mid-Modern interiors throughout the country.

To complete the connection between the architect and the furniture, Killingsworth redesigned the store’s showroom in 1963, giving it a new entrance along with floor-to-ceiling glass and an atrium-like interior.

The Frank house is listed by Elaine Ross of Keller Williams.