A timeline of March 2020: A dreadful month that began with a cruise ship stuck in the Long Beach harbor • Long Beach Post News
- ADVERTISEMENT -

In early January, the World Health Organization first announced the emergence of a mysterious coronavirus that had been discovered in Wuhan, China, nearly 7,000 miles from Long Beach, a city basking as usual in the weeks before spring, living life as always: Shopping, dining out, attending concerts and sporting events, attending classes, gathering with friends, only barely aware of the virus and not overly concerned about it.

From our current vantage, it’s difficult to believe life once went on like that.

For a while, it was a faraway problem. The virus was immune to distance and boundaries, though, and it stealthily traveled from person to person, country to country, aboard airplanes and cruise ships, and when it came, it came hard and changed how we live in Long Beach and throughout the world, and, in one short but ferocious year it killed more than 2.5 million people worldwide, including more than 520,000 in the United States and 857 in Long Beach.

In Los Angeles County alone, 716,000 jobs were lost; and tens of thousands children were sent home to learn in front of a computer screen. Business owners, particularly restaurateurs, found themselves scrambling to stay afloat or going under altogether.

But in early 2020, it took weeks, precious weeks, when perhaps more could have been done to forestall or lessen the calamity that lay ahead.

There was no early help from the White House, whose resident continually downplayed the virus, maintaining it would do little damage in the U.S. before it would miraculously go away.

On Jan. 21, the Centers for Disease Control announced the first U.S. case of the “2019 novel coronavirus,” which would later come to be known as COVID-19.

Still, no one seemed overly concerned, even after the World Health Organization issued a global emergency for just the sixth time in its history on Jan. 31.

February passed, with still little being done to prepare for COVID’s future effects in the U.S.

Even as the coronavirus was ravaging countries in Western Europe, including Italy and Spain, in Southern California, residents were more interested in news closer to home. Long Beach was thick in the midst of election season, and people were mourning the sudden death of Lakers star Kobe Bryant in a helicopter crash.

The first inkling that this might be a big deal came on leap day, Feb. 29, when the Journal of Commerce announced it was canceling its TPM20 conference at the Long Beach Convention Center. It was the same day that the U.S. recorded its first COVID-19 death: a man in his 50s in Washington state.

In a Post story about the convention cancellation, local restaurateur Luis Navarro, who owns Lola’s and other establishments, said of the virus: “I’m not panicking and we haven’t seen an impact yet, but that doesn’t mean it won’t happen. We’re bracing for this.”

In early March, the seriousness of the virus arrived in Long Beach in the form of a stranded Carnival cruise ship, the Panorama, on the docks of the city’s harbor. A guest was rumored to have contracted the virus, and the ship’s roughly 4,000 passengers were kept aboard until the individual could be tested.

March 2020 in Long Beach quickly turned into the busiest, scariest and most frantic month in memory. Doors slammed everywhere with COVID-caused closures and cancellations. The balance of the month, as winter turned into spring, looked like this:

Saturday, March 7, 2020: In an “abundance of caution,” the Centers for Disease Control kept passengers aboard the Panorama in Long Beach overnight, about 24 hours after they were scheduled to disembark.

The rumored infected passenger, a woman, tested negative at about 10 p.m. that night.

Meanwhile, the city and the Long Beach Convention & Visitors Bureau raced all day to arrange local hotel rooms for the thousands of passengers who had been scheduled to board the ship earlier (and, a fact that’s amazing only in retrospect, they eventually did sail off for an abbreviated six-day voyage to Mexico. Carnival has not sailed since). 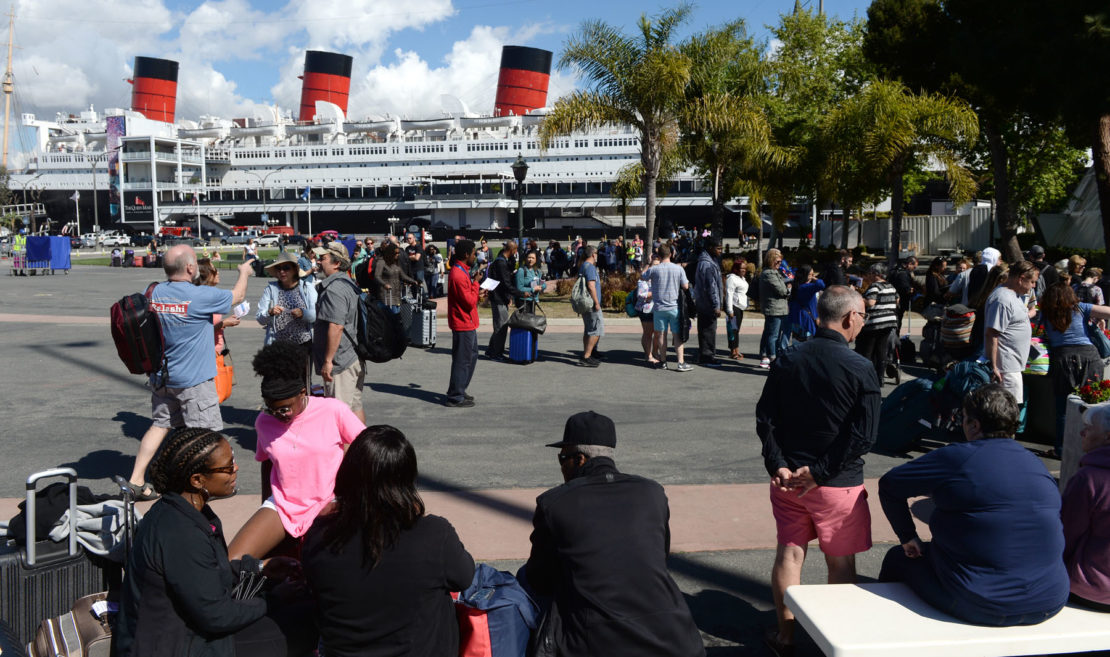 Passengers wait to enter the screening area at the Long Beach Cruise Terminal after a delay aboard the Panorama caused by a possible coronavirus case. March 8, 2020. Photo by Stephen Carr.

Two of the people infected had recently returned from a cruise on the Nile River in Egypt, and the third person had traveled to a place in Northern California with known transmission.

The three cases were among 19 recorded at this point in Los Angeles County.

Tuesday, March 10: The Big West conference announced games will be played with no audience at Cal State Long Beach’s Pyramid. 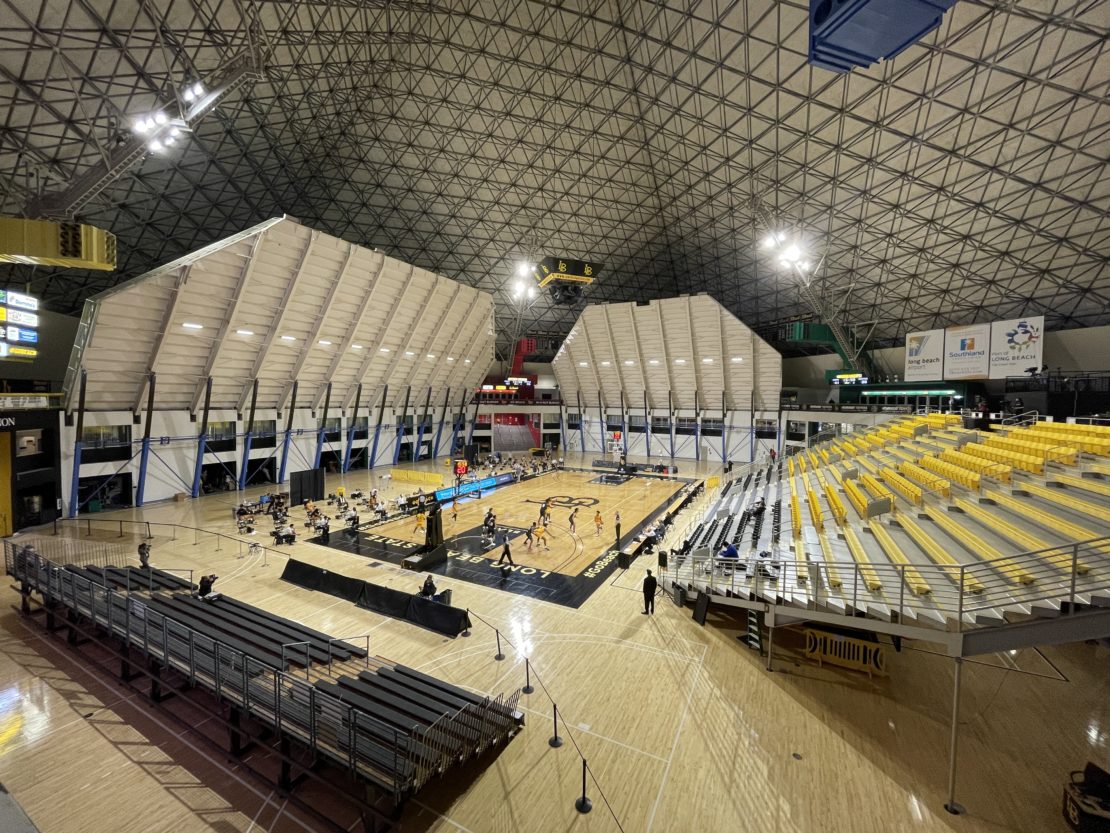 Wednesday, March 11: The World Health Organization declared a global pandemic, and a number of other significant events happened:

And, under orders from the city, organizers of the Acura Grand Prix of Long Beach postponed April’s 46th edition of the street race amid increasingly growing fears of the coronavirus.

Friday, March 13: Long Beach Unified announced it would close in-person classes for one month, and the Aquarium of the Pacific said the facility would close. 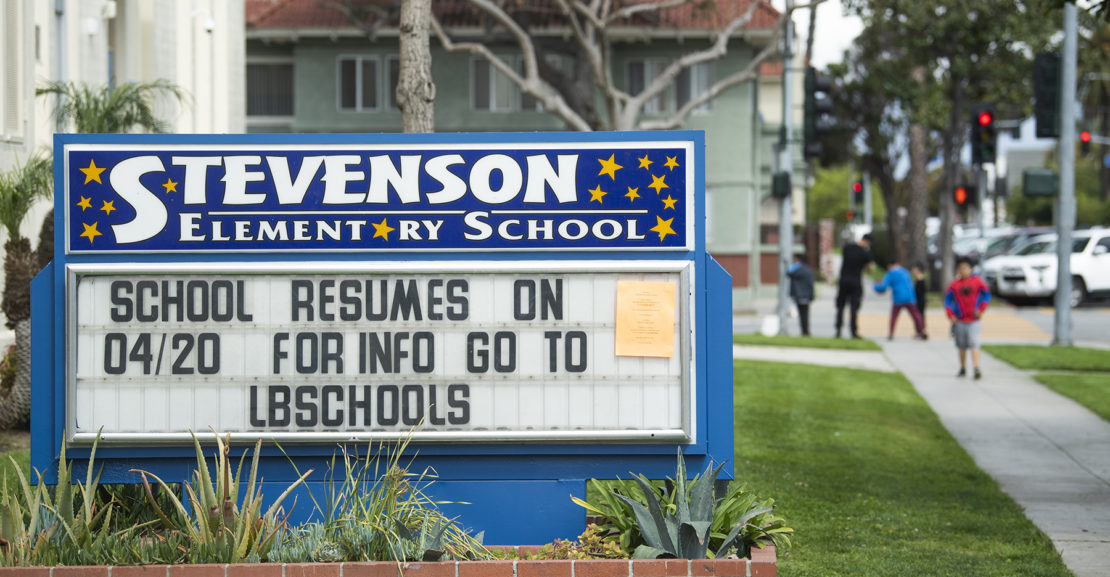 Parents walk their children by Stevenson Elementary School to get their school lunch in Long Beach Thursday, March 19, 2020. Photo by Thomas R. Cordova.

Saturday, March 14: The City Council, having just moved into its new City Hall, announced it would meet by phone only, and the city would close all public buildings.

Later that day, the city announced its first case of “community transmission” of the coronavirus.

Sunday, March 15: The governor made a sweeping announcement that evening, saying seniors over 65 should stay home and isolate themselves.

Long Beach announced it would close bars and wineries under state direction, and the city would limit the number of patrons who could be present in restaurants to half of building occupancy.

Post columnist Tim Grobaty, who had turned 65 in January, was banished to quarantine at home, where he wrote 80 columns in 80 days about everything from his sister being hospitalized with COVID-19 to learning yoga. 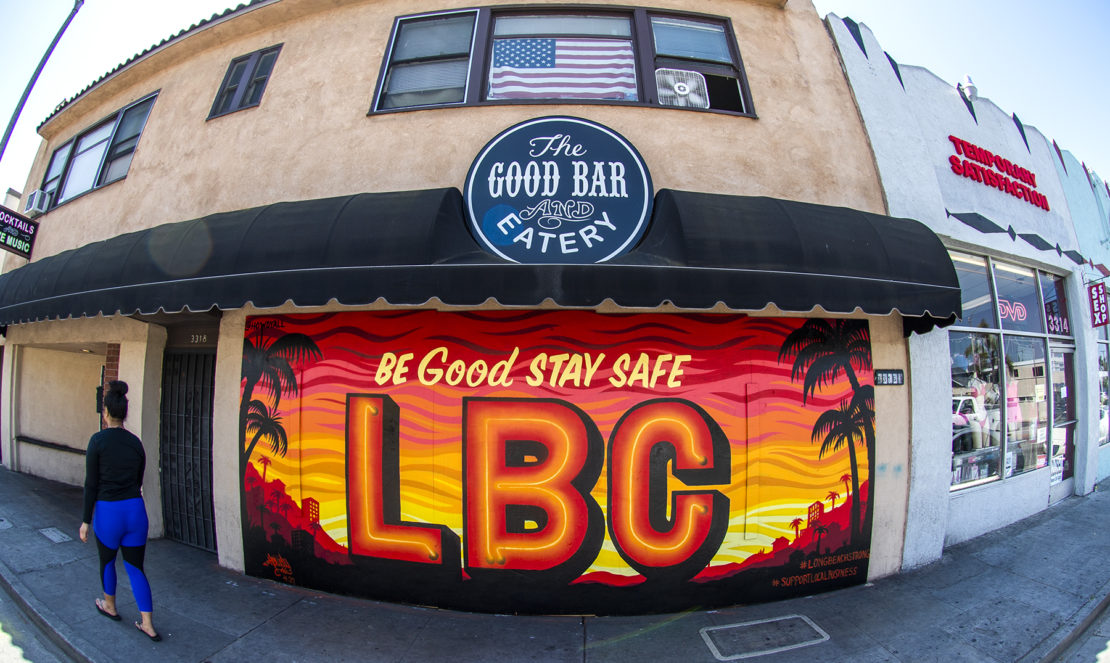 The Good Bar, temporarily boarded-up due to the COVID-19 pandemic in Long Beach Monday, April 27, 2020. Photo by Thomas R. Cordova.

Monday, March 16: Long Beach moved toward shutting down dine-in service at all restaurants, as well as closing movie theaters, gyms and other places where crowds gather.

The county sheriff’s department also took steps to reduce the inmate population at jail facilities by essentially releasing people with less than 30 days left on their sentences.

Grocery and drug stores, meanwhile, were having serious trouble keeping their shelves stocked as people panicked amid new restrictions. The frenzy got so bad that a number of stores implemented special hours so that seniors could get vital supplies and rationed the amount of certain products people could buy. Restaurants that could no longer serve diners took to selling eggs, milk and other products as groceries to residents. 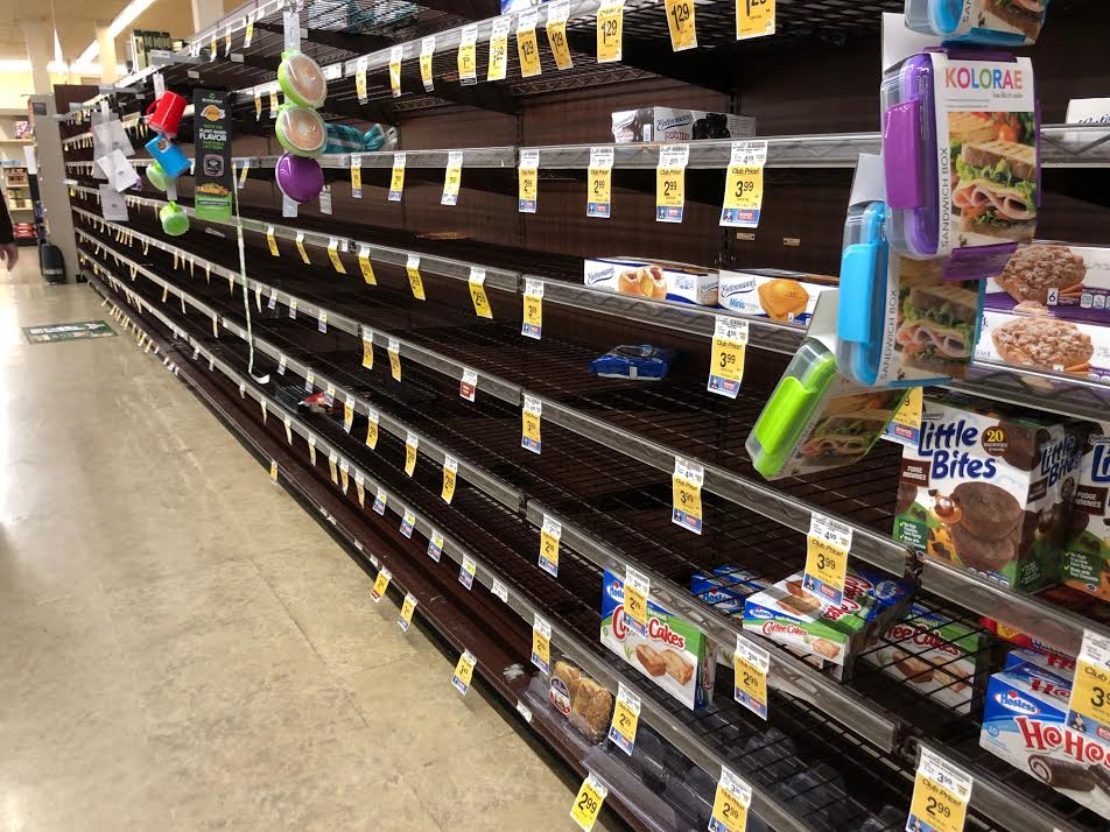 Empty shelves at a Ralphs store in Long Beach due to over-buying in response to the coronavirus pandemic on Saturday, March 14, 2020. Photo by Stephanie Rivera.

Tuesday, March 17: Long Beach reported its eighth case of the coronavirus, and the numbers in Los Angeles County grew to almost 100.

CSULB canceled face-to-face classes for the rest of the spring semester, moving them to an online or otherwise remote format.

St. Patrick’s Day passed and no one noticed, except for bar owners, who missed what is traditionally one of the year’s busiest days.

Wednesday, March 18: The three largest hospitals in Long Beach prohibited outside visitors, hoping to stem the spread of the coronavirus.

Grand Prix officials announced the race wouldn’t be held at all that year.

“We can’t tell you exactly how long these orders are going to be in place, but we know it will be temporary,” LA County Supervisor Kathryn Barger said at a press conference that evening.

In the sole silver lining of the order, streets and freeways were suddenly wide open and traffic jams disappeared.

Sunday, March 22: President Donald Trump activated the National Guard in California, and said his administration would send a massive Navy hospital ship, the USNS Mercy, to the Port of Los Angeles in an attempt to take the strain off local hospitals dealing with COVID-19 patients. (The ship departed roughly a month later after treating just 77 patients.)

Monday, March 23: Long Beach announced its first fatal case of coronavirus, a woman in her 50s with underlying health conditions.

“We’ve been dreading this day and were hoping it would never come,” Mayor Robert Garcia said at a media briefing that day. 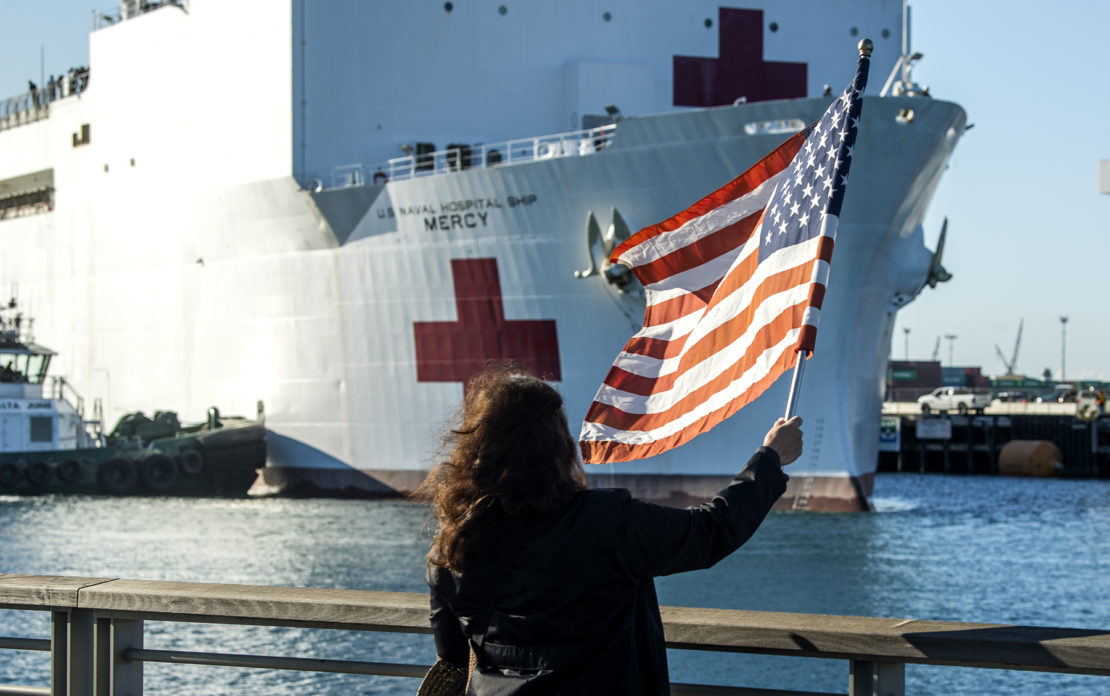 A woman waves the American flag as the USNS Mercy prepares to dock at the Port of Los Angeles in San Pedro Friday, 27, 2020. The hospital ship non-commissioned service with the United States Navy. Photo by Thomas R. Cordova.

Long Beach Unified undertook a massive effort to get all students a free Chromebook, internet access and meals.

The city announced eight Long Beach firefighters tested positive for COVID-19, with many of the cases tracing back to Fire Station 11. 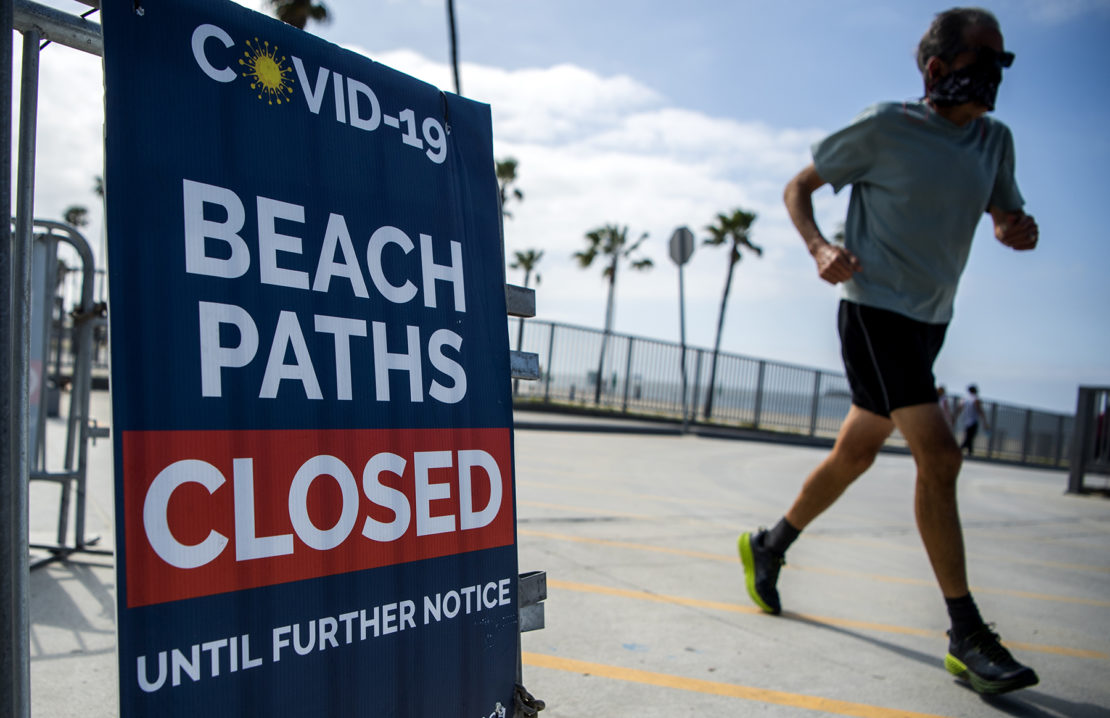 A jogger runs by a closed beach path sign in Long Beach Monday, May 11, 2020. File photo by Thomas R. Cordova.

Tuesday, March 31: On the last day of this long, dreadful month, the city reported 123 total cases, and one death.

Los Angeles County had reported a total of 3,011 cases and 54 deaths.

The end was not in sight, and the worst, as we know now, was yet to come.