A woman's fight to save her home—and her pig • Long Beach Post News
- ADVERTISEMENT -
Help us light up the city; Add your home to the 2022 Holiday Lights map. CLICK HERE

The pandemic killed Anne Bergstedt’s jobs as a yoga instructor, DJ and radio show host, leaving her unemployed and awaiting those sectors to be reopened. Since then she’s burned through $27,000 in savings to keep up with her rent and bills. Last month, her father died just months after being diagnosed with lung cancer.

And now, she faces losing her home over a battle to keep her emotional support pig, Olive Garden, on the premises.

The 34-year-old Bergstedt has lived in her Hellman neighborhood home for about seven years, the last year and a half with a 6-year-old, 95-pound Vietnamese pot belly pig that she named after her [Olive’s] favorite restaurant.

The home, a 310-square-foot studio she pays $1,475 per month for, is small, but it’s the yard space that is critical for her and Olive. The tenants in the front house recently moved out and now she may be next as she continues to fight for the right to keep Olive.

Finding another home for Olive, a mascot for the KLBP radio station where Bergstedt hosts a show, will be tough enough. But Bergstedt’s home is walking distance to St. Mary Medical Center where she’s received treatment for seizures for the past 16 months. Being able to walk to the hospital is critical because she can’t drive.

Being forced to move while unemployed would only compound an already complicated task.

“It will destroy literally everything,” Bergstedt said.

Olive made the trek from Brooklyn in December 2019 after her original owners, friends of Bergstedt who she said were victims of a “mini-pig scam” and could no longer care for such a big pig in a small apartment. Her previous family fed her Olive Garden breadsticks as a treat on cab rides home from the vet.

A friend drove Olive cross-country during winter storms to her new home in Long Beach where she’s had a yard to root, run and relax in. It was her first time in a backyard, Bergstedt said, explaining how Olive now randomly bursts into “zoomies.”

Olive now shares the yard with her best friend, a chicken named Dallas, and a Japanese Chin named Inga. However, their run at the home could be coming to an end as a dispute with her landlord could force her to choose between her home and Olive. A deal brokered by her city councilmember’s office allows her to stay through mid-July, but it’s uncertain what happens after that.

“I just don’t understand why she has to go somewhere else,” Bergstedt said. “It’s not fair for her and it’s not fair to me either.”

Bergstedt said that her landlord, Kevin Davidson, and she have had a great relationship prior to the start of this year, with Bergstedt living at his property for seven years and making multiple improvements to the home along the way.

She said that as she and Davidson developed a friendship over the years he became aware of her disabilities, which include seizures and bipolar disorder, and how Olive now helps her deal with those issues in the wake of her long-time service dog passing away in February 2020.

After Bergstedt’s dog Sophie died, Olive stepped into the role of a service animal for her. She said that besides offering companionship, Olive warns her of oncoming seizures by bumping her leg with her body.

When Sophie died “there was this void,” Bergstedt said. “And Olive just stepped into her role.

Rental agreements obtained by the Post show that in a lease dated in May 2020, when Davidson relinquished management of the property to Ernst and Haas, Olive was explicitly included, and had been since she moved to Long Beach in December 2019.

Davidson declined to comment when reached by phone this week and deferred questions to David Haas, of Ernst and Haas. Haas declined to discuss the issue citing tenant privacy and asked for questions to be emailed, to which he also did not respond. 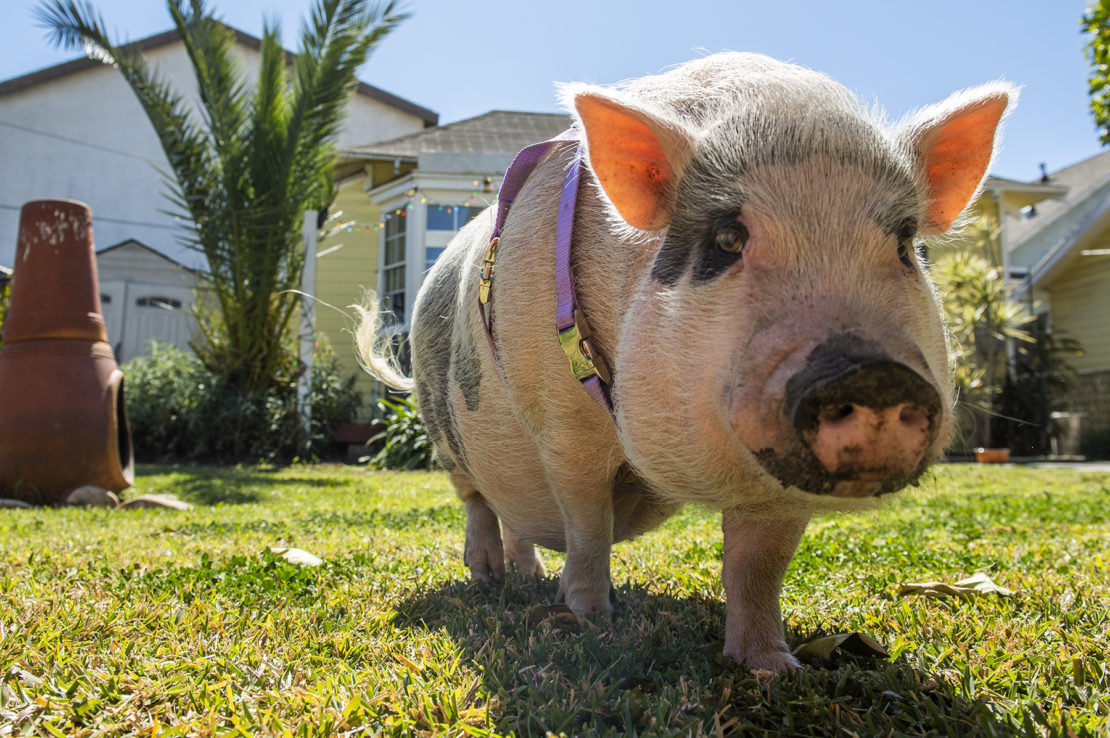 Olive Garden the pig roams through its yard while at her home in Long Beach Tuesday, March 2, 2021. Photo by Thomas R. Cordova.

In January Bergstedt received a notice from a property management firm that Davidson hired to handle day-to-day operations of the property that Olive needed to leave in 30 days.

The reason Bergstedt was given was that the “laws have changed” in Long Beach about pigs being allowed on residential properties. While the city does have bans on bears, tigers and hippopotamuses, the city allows pigs as along as they live 100 feet from a residence or the nearby property has given permission.

Bergstedt has filed a complaint with the state’s Department of Fair Employment and Housing for alleged discrimination, and found an attorney to represent her.

Her lawyer, Ed O’Reilly, believes she’s protected by the Americans with Disabilities Act because of the service that Olive provides for her, but questioned if the real issue for the property management company and the landlord is really the pig.

O’Reilly said the move by Davidson and the property management company looked like a “disguised eviction” during a pandemic in which state and local agencies have forbidden no-fault evictions. The nature of Bergstedt’s and Davidson’s relationship and the fact that Olive was targeted points to something darker, he said.

“They knew that by saying the pig had to leave that meant she would have to go,” said O’Reilly, who is working the case pro bono. “It’s like walking down the street and kicking someone’s crutch out from under them. This is intentional.”

While O’Reilly is hopeful to come to an agreement out of court, he’s prepared to file a suit on behalf of Bergstedt, he said.

Bergstedt could have firm legal ground to stand on because of her disability.

Susanne Browne, a senior attorney with Legal Aid Foundation of Los Angeles, a nonprofit that represents persons facing evictions, among other things, said that the ADA requires owners to make reasonable accommodations for service and support animals.

Browne added that if there isn’t damage being caused to the property it would be hard to have a legal ground to evict a tenant because of the animal.

“These are very real protections,” Browne said of ADA laws protecting tenants. “They [landlords] really have to engage in a process to accommodate your needs. If they don’t, it’s illegal.”

Browne said her organization is pushing for the city to create a rental housing division in the city that can handle disputes like the one between Bergstedt and her landlord. She estimates the cost would be about $700,000 and is hopeful that the city will consider diverting federal COVID-19 response money to the cause.

“Her recourse should not be calling a reporter and a council person,” Browne said. “It’s a huge gaping hole in the city.”

While Bergstedt awaits a final decision to be reached she knows it’s a very real possibility that she and Olive will have to relocate. She gets emotional thinking about it but is hopeful that “being on the right side of the law” will end positively for her and Olive.

“What’s happening is wrong,” Bergstedt said. “This is happening in non-animal related situations and people are getting it left and right, and I understand that part. While nobody owes me anything at all I do feel that I have a valid voice in this and that this man’s actions deserve to be known.”