Restaurateur Terry Antonelli has opened 27 restaurants in his career, including the Madison and Alegria on Downtown’s Pine Avenue. But his “baby,” his crowning achievement, has for 30 years been L’Opera, in the historic former First National Bank of Long Beach building.

He spent two years and well over a million dollars transforming what was then a Bank of America branch into an opulent and world-class restaurant at 101 Pine Ave.

The high-dollar Italian restaurant was loaded with luxury: Original artwork abounded, including a $125,000 mural in the main dining room, rich wood cabinetry and marble pillars, brass double front doors, an immense wine cellar in the private La Scala and Wine Cellar rooms in the subterranean level, and the finest kitchen equipment and walk-in refrigerators and freezers money could buy.

When the transformation was complete, Antonelli opened L’Opera on Thursday, April 19, 1990, on Grand Prix weekend, when his customers included a virtual racers hall of fame—the Andrettis, the Unsers, the Penskes and actor-racer Paul Newman.

For the next 30 years, L’Opera was the go-to restaurant for the finest in elegant dining in Long Beach, filled with conventioneers, wedding dinners and rehearsals, wealthy regulars and common folk splurging on a special occasion.

Then in March 2020, COVID-19 led to L’Opera and every restaurant in the city to shut down. But the end for L’Opera came swiftly and viciously on the afternoon and into the evening of May 31 last year, when a peaceful protest sparked by the murder of George Floyd in Minneapolis devolved into looting and vandalism concentrated in Downtown. Shops were broken into and ransacked; windows were shattered in storefronts and other buildings; fires erupted.

And L’Opera, in particular, was brutally vandalized. Though Antonelli had the place boarded up as a precaution against violence, it appeared, after a couple of hours, that the protest was going to be a peaceful event, and Antonelli went home at around 4 p.m. feeling that all would be well.

At about 4:30, a throng of looters attacked the restaurant, ripping the plywood off the front, shattering glass doors and windows and pouring into the restaurant. For three and a half hours, the mob utterly destroyed virtually every part of L’Opera.

Walking through the restaurant, Antonelli pointed at, well, everything. “They broke all the glass, graffitied all the walls, all the paintings, they tore off the refrigerator doors, took all the wine and liquor and what they didn’t take away, they threw against the walls.”

The $125,000 mural? Torn and spray-painted. Cabinets turned to kindling and splinters.

“They had crowbars and hammers that they took to the bars and the marble columns,” Antonelli  said.

Later, looking at security camera video, Antonelli counted 63 people making havoc with his restaurant for three and a half hours. “They were taking armloads of liquor and food out to vans in the garage and they’d fill them up and the vans would drive away. It was all very orchestrated.”

The police, throughout the melee, stood down, milling on a street corner just yards from L’Opera.

“I’ll never understand that,” said Antonelli. “I’ve been assured by everyone in the city that that won’t happen again,” he said. And maybe it won’t, but it happened on May 31.

The following morning, Antonelli sat in his ruined restaurant. “I sat there for three hours thinking, ‘Do I really want to do this again, after the way I was treated?’” He talked it over with two of his longtime employees, executive chef Walter Cotta, and general manager Nicole Lira, and the decision was made to rebuild. It would take a lot of time and a lot of money, though he was lucky that his insurance covered the disaster.

“It took a month just to clean up the mess,” said Antonelli. Downstairs, the vandals had broken so much glass that there were big shards of it sunken into the wood everywhere. Antonelli had the wood flooring pulled out and put in travertine.

“That’s better, anyway,” he said. “It’s easier to care for and it won’t buckle or warp when it gets wet.”

The entire process of rebuilding L’Opera, as it turned out, was full of those sort of little silver linings.

“In a way it was a blessing in disguise,” Antonelli said. “Instead of a 30-year-old restaurant, I now have a new restaurant. Instead of just covering things with a Band-Aid, I rebuilt everything, put in all new kitchen equipment, all new furniture and cabinets, new flooring. I just improved everything.”

That includes a new mural in the dining room—this one is a massive painting of the stars of Martin Scorsese’s 1990 mob epic “Goodfellas,” with the addition of Antonelli.

The restaurant now is largely finished, just needing another shipment of furniture and a pair of massive front doors, which will enable him to finally take down the plywood and concertina wire that has barricaded the entry since the looting that brought everything crashing down. 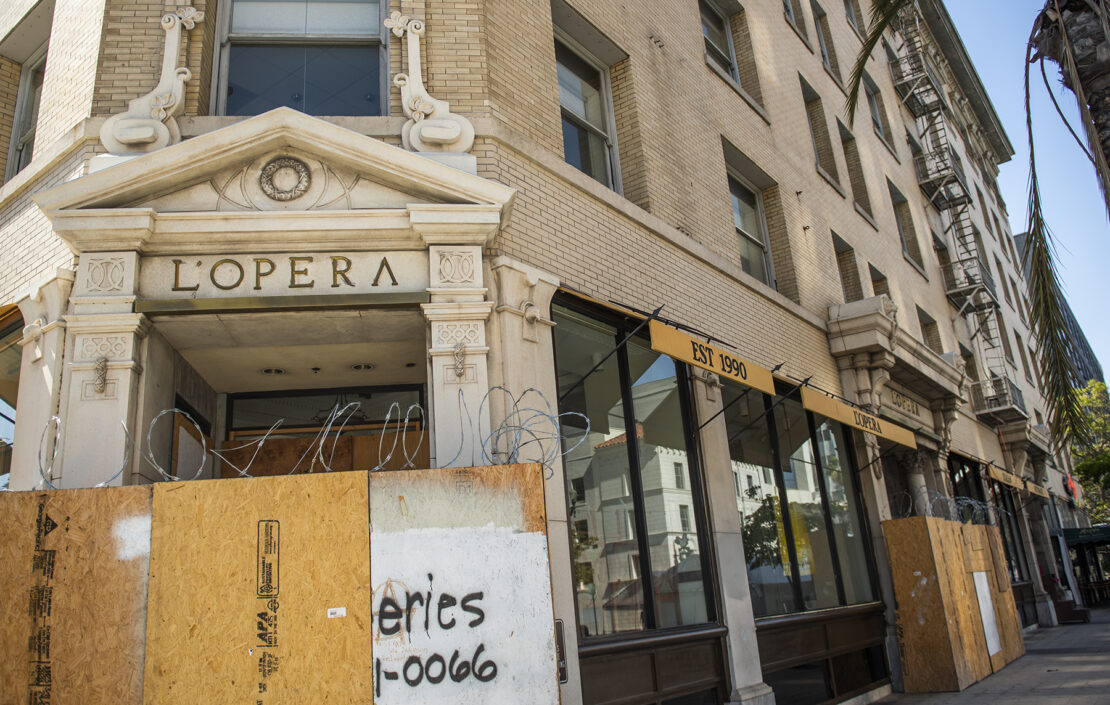 The front entrance of L’Opera shortly after the vandalism and looting. Photo by Thomas R. Cordova.

Antonelli said he plans to open rather quietly on May 24, just a week shy of the one-year anniversary of the looting.

The menu, he said, will be a little smaller—”the old one was a book”—because COVID regulations limits him to a paper menu. “But we’re keeping the popular items and adding a few new ones,” and initially the capacity will be at 50%. Antonelli reckons he can accommodate 175-180 diners at a time, at least through June 15, when it could increase to 100% capacity.

He said he’s not sure how big the crowds will be this time around. “The phone calls and emails I get from people say they’ll all be here, but conventions are still not happening and we always do great with conventions, so we’ll just have to see.”

But Antonelli says he’s excited and happy to be getting back to business.

After the May 24 opening, Antonelli says he’ll throw a grander opening, a sort of belated celebration of L’Opera’s 31st year, in August or September.