The demonstration initially started out as an angry but restrained protest around 3 p.m. as hundreds marched down Broadway through Alamitos Beach shouting “Hands up; don’t shoot.”

By the evening, shattered glass covered the pavement of retail stores at the Pike Outlets and along The Promenade and Long Beach Boulevard. Drug stores, jewelry stores and liquor stores were popular targets throughout Downtown and beyond.

At an evening press conference, Mayor Robert Garcia said the city was still assessing the damage caused by looters and those clashing with police.

Police initially appeared to take a strategic stance against making arrests or pursuing suspects, in one case watching looters exit a store called Outfitters while numerous individuals jumped out windows and ran off with armfuls of merchandise.

Video of the incident was broadcast widely on ABC7:

Luna said police are doing all they can to stop the violence, and the department would “make as many arrests as we can.”

“We will not accept this in this city,” he said, adding that the department brought in hundreds of extra officers for the day’s protests.

After 8 p.m., when the city’s curfew went into effect, police broke into strike forces to chase looters and warned they would make arrests. The larger of the protest crowds had been mostly dispersed into smaller groups, however a larger crowd again gathered along Ocean Boulevard near Pine in a standoff with police.

“Those who are causing crime and destruction should be shamed of themselves.”

He called out in particular the story of the owners of Kress Market on Pine Avenue, owned by two immigrants who put everything into the local bodega.

“I saw that store being attacked tonight,” Garcia said.

The National Guard has been called to support local officers and fire officials. On Saturday, the city sent officers to Los Angeles to help with the unrest there; on Sunday, the police department needed its own resources, quadrupling the number of officers stationed in the Downtown area, Luna said.

More than 1,000 people flooded the streets of Downtown earlier in the day—about 80% of them peaceful, Luna said. Some of the protesters even yelled at looters and physically tried to stop them from stealing goods.

At one point a crowd of hundreds marched down Pine Avenue and gathered in front of the Nike Store at the Pike Outlets, where some protesters attempted to loot the store.

Other linked arms and blocked their way, shouting at the would-be thieves and lecturing them through a megaphone. Others in the crowd chanted “don’t loot.”

Looters nearby also smashed the windows of Forever 21 and The Guess Store and ran off with armfuls of merchandise as others yelled “please stop” and “don’t do this.”

At one point, they smashed through a metal security gate at Kay Jewelers, ransacked a Hot Topic and then scattered as Long Beach Police SWAT marched slowly through the street.

Police showed their presence but stood their ground as looters ran off with clothing and other goods.

“It’s irritating to watch people go into stores and steal the items,” Luna said. “That is not the way you make a point. How do we celebrate the life of George Floyd or talk about his tragic death when you have people committing crimes?

On The Promenade, jewelry was scattered along the street after a crowd broke into the Mark Schneider jewelry store. 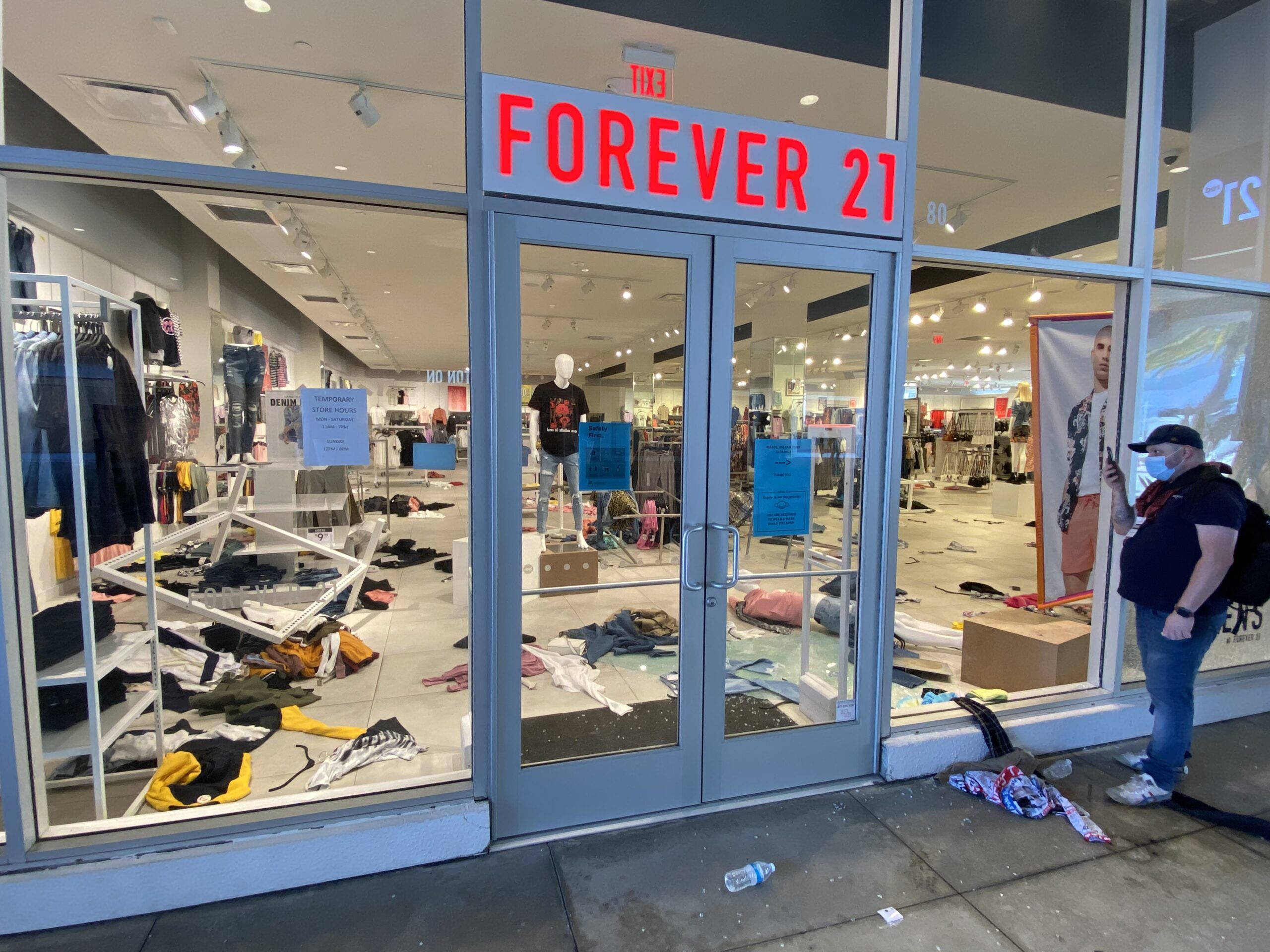 The Long Beach Fire Department also responded to a blaze at CVS on Long Beach Boulevard and 6th Street that had also been looted. The fire appeared to be extinguished.

The fire department was overwhelmed by the number of incidents and calls coming in, fire Chief Xavier Espino said.

Nearby, broadcast video showed looters raiding a Walgreens on Long Beach Boulevard with armfuls of merchandise, then dropping clothes and boxes and nonchalantly walking away as police surrounded the building. Shattered glass covered the pavement in front of the Downtown storefront.

In Belmont Shore, 2nd Street was extremely quiet, though police blocked off the major shopping thoroughfare from Quincy to Bayshore with yellow tape. Asked if he thought it would be effective, one officer said, “I hope so.”

Several stores had boarded up windows with plywood and cardboard.

Lakewood Mall was also closed down, as well as Costco in Signal Hill and other stores and retail centers outside the city’s core.