Five months after the brutal killing, Cora Klahn got a letter in the mail.

In blocky blue-ink printing, the handwritten note offered an apology from “Adrian B.”—presumably 17-year-old Adrian Berumen, one of the two Poly High School students accused of murdering Klahn’s 42-year-old son and using his cash for a shopping spree at the Lakewood Mall.

“I am the boy who got into the accident with your loved one, Christopher Waters,” Adrian B. wrote, before asking for forgiveness.

One word stood out to Waters’ family: “accident.” As if, they said, beating Waters in 2013 with a miniature baseball bat, strangling him with an electrical cord and then torching his body in the quiet hills of Palos Verdes could be an accident.

Eight years later, that word still stings, the family says. On Tuesday, Klahn kept the letter close, folded up in her purse, as she watched a crucial hearing in Berumen’s case. The judge was about to decide whether Berumen, now 26, should face trial for Waters’ death or if he could admit to a lesser charge and avoid a jury.

This was because prosecutors had recently offered Berumen a plea deal. If he admitted to second-degree murder and a previous unrelated assault, they’d drop the more serious first-degree murder charge.

In terms of prison time, this would make only a few years difference, netting Berumen 19 to life instead of 25 to life. But to Waters’ family, the contrast was immense.

Pleading to second-degree murder would mean Berumen didn’t have to admit Waters’ slaying was premeditated or committed during a robbery. Instead of confessing that he lured Waters into a garage in order to beat him and take the cash he’d saved up for an apartment, as prosecutors originally alleged, Berumen could stick with the letter’s version of the story that “the way things happened were not intentional.”

Christopher Waters. The 42-year-old artist was killed in 2013. Photo courtesy of his sister Jennifer Waters.

It was one more way, the family thought, for Berumen to avoid full responsibility and manipulate the system, which had delayed his trial for years as the case wound its way through juvenile court before being stalled again by the pandemic once it eventually landed in adult jurisdiction.

But the letter also foretold another view of Berumen. Not just an apology, it offered a pledge of redemption.

“I do not know what is going to happen to me at this moment,” Adrian B. wrote back in 2013, “but I do know God is my way now. He used this whole experience to open my eyes. I know he has big plans for my life and this is only the beginning.”

As he’s awaited trial, Berumen has made good on that promise, according to people within the criminal justice system.

The two volunteered to live in a block of cells filled with some of the most volatile and untreated prisoners suffering from severe diseases like schizophrenia and bipolar disorder. Berumen and Armstrong, who are not mentally ill, became peers to their struggling neighbors, guiding them through life and advising jail clinicians on how to help them.

“You may have to help guys shower, help them brush their teeth, teach them to brush their teeth. We make sure that they’re taking their medication,” Armstrong said during an April seminar he and Berumen participated in from the Twin Towers lockup in Downtown Los Angeles.

Through sheer patience and kindness, other attendees at the seminar said, the duo has helped turn a corner in jailhouse mental health services, almost singlehandedly reducing the number of seriously mentally ill inmates harming themselves or repeatedly cycling through custody. 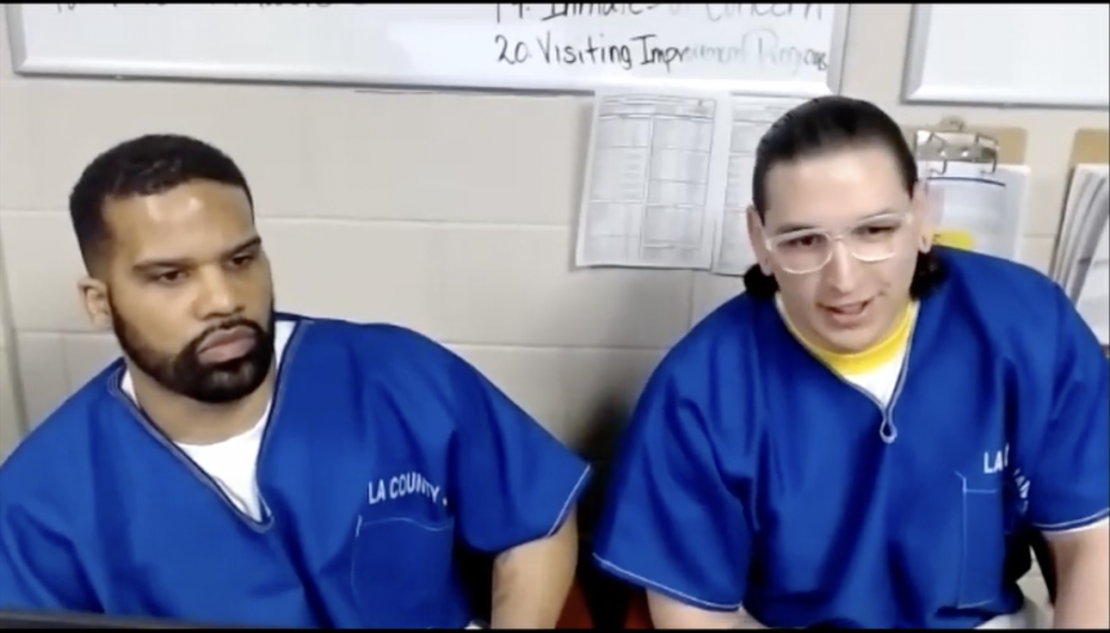 Craigen Armstrong and Adrian Berumen talk about the Mental Health Assistant program they developed in the Los Angeles County Jail during an online seminar in April. Photo courtesy Kerry Morrison.

“They’re basically volunteering to be in service to others 24/7,” Joan Hubbell, a mental health program manager with the county, said during the seminar.

This week, as the judge decided Berumen’s fate, those two pictures of him as a selfless healer and a heartless killer collided in Long Beach Superior Court.

In previous court appearances, lawyers have painted Berumen as the mastermind killer bent on stealing from the 42-year-old Long Beach artist who’d been helping Berumen and his fellow Poly High classmate start a T-shirt business.

During the trial of Berumen’s accused co-conspirator, Jose Angel Martinez, prosecutors showed text messages Berumen sent arranging to meet Waters on the morning of April 23, 2013. Berumen then texted a different friend, saying he was going to “gank that nigguh tomorrow,” meaning he planned to rob Waters, according to prosecutors.

Martinez originally told police that Waters was actually the aggressor, attacking him and Berumen unexpectedly when he arrived at the garage where they’d arranged to meet. But at trial, he changed his story, saying Berumen was the one who attacked without warning, brutally beating Waters with a miniature baseball bat before barking at Martinez to help him clean up the blood and enlisting him to help dispose of the body by driving it to Palos Verdes and setting it aflame.

The jury apparently rejected Martinez’s shifting of blame to Berumen, convicting him in 2017 of first-degree murder and arson. The irony is not lost on Waters’ family that Berumen—portrayed so far as the ringleader—had now been offered a plea agreement for the less-serious second-degree murder.

Such a deal “would feel like another crime had been committed upon us,” according to Waters’ cousin Suzanne Dean.

But before the plea could go through, a judge had to approve of it. So to bolster their case, Berumen’s attorney highlighted his work in the jails.

Berumen is “an exceptionally dedicated and empathetic worker who is fully committed to redeeming himself to society,” Philippe Bourgois, director of UCLA’s Center for Social Medicine, wrote in a letter to the judge. Bourgois volunteers in the jails as part of his research, and in the years he’s observed Berumen, he’s watched him run from cell to cell, helping doctors and jailers calm down inmates in such severe crises that they’re smearing feces, endangering themselves or attacking others.

According to Bourgois, who has a Ph.D. in anthropology, the magic of Berumen and Craigen’s method is they “figured out on their own basically what psychiatry had forgotten, which is to treat people with serious mental illness as a real human being who one wants to befriend and doesn’t want to leave socially isolated.”

Their model has been so successful it’s drawn praise from some of the highest levels of the sheriff’s department, which is expanding the program based off the curriculum Berumen and Armstrong developed. They’ve been working to select new Mental Health Assistants, the name Berumen and Craigen came up with for their job, from the jail’s general population. 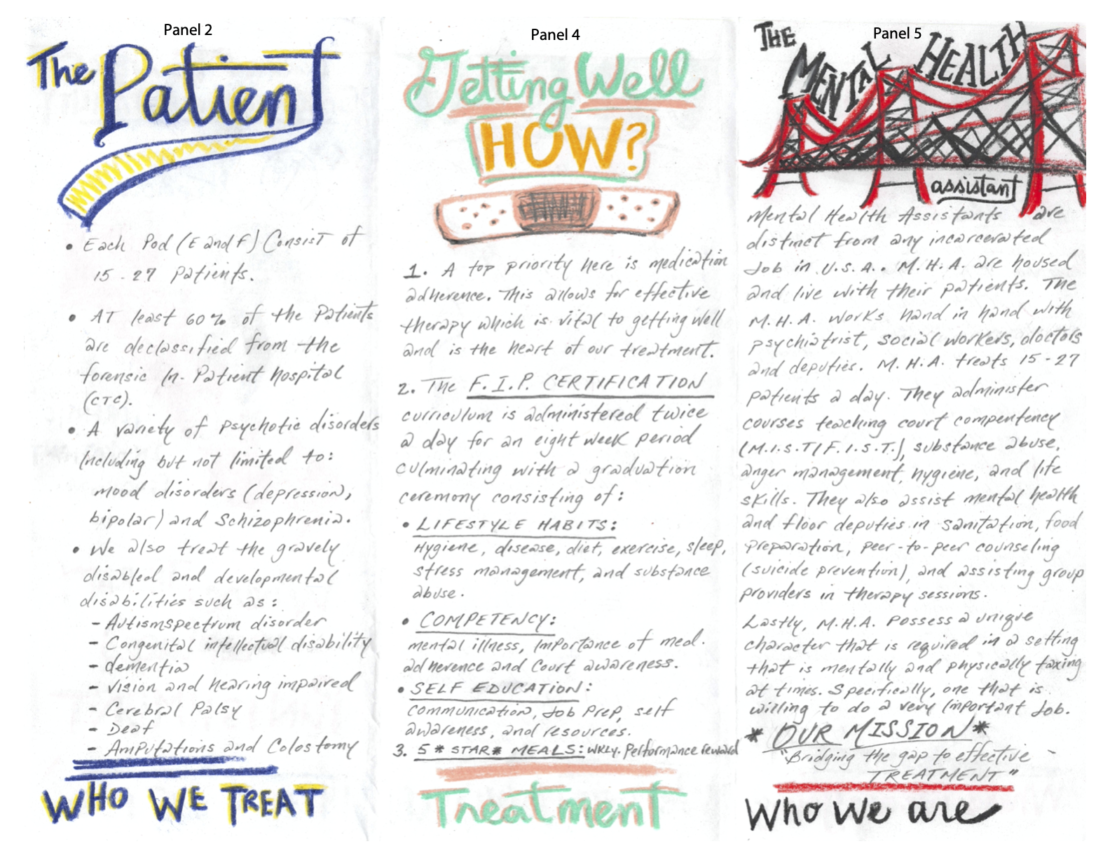 “It’s individuals like this that are just trying to make themselves better,” the county’s jails chief, Assistant Sheriff Bruce Chase, said during the April seminar.

Working 24/7 with the mentally ill men in his pod of cells can be taxing, Berumen said according to a recording of the event, but in jail, he realized he had the opportunity to do something good.

“I’ve caused a lot of destruction and pain in my past,” he told the moderator, “and, I mean, who doesn’t want to be better from their different choices?”

But even after hearing about Berumen’s work, the judge who would decide on his plea was skeptical. At Tuesday’s hearing, Judge Laura L. Laesecke pointedly questioned Deputy District Attorney Rachel Bodley about why she’d offered Berumen the lesser charge.

Laesecke, who’d overseen Martinez’s trial, had heard emotional testimony from Waters’ family, and said it troubled her that they weren’t on board with Bodley’s plan. She asked why Berumen deserved to be convicted of a lesser charge than his alleged co-conspirator.

Bodley, now in the awkward position of having to poke holes in her own case, told the judge she didn’t think she could prove Berumen intended to kill Waters or, alternatively, that the killing took place during a robbery—two ways she could potentially achieve a first-degree murder conviction.

The defense, she said, could feasibly say it was just teenage bravado that prompted Berumen to text a friend about luring Waters to the garage to “gank” him.

Laesecke floated a different possibility. Could strangling someone, burning his body and then immediately hopping in a cab to go on a shopping spree be more psychopathic than immature?

“No child that I know of, who you’re describing as an immature kid, would be OK with that,” she said.

In the end, she blocked the deal. After eight years in a holding pattern, Berumen’s case needs to move swiftly toward trial, the judge said.

“I will not allow a second-degree plea now that I also know the victim’s family is not on board,” Laesecke said.

But the winding path toward trial may not have reached its end. This week, a new attorney took over Berumen’s case.

After learning of his work behind bars, a Loyola Law School professor took an interest. Sean Kennedy, who oversees the university’s Center for Juvenile Law and Policy, is now representing Berumen.

Berumen, he argued, is the perfect example of someone who’s shown he can be rehabilitated in an institution like the juvenile justice system that places an emphasis on treatment as opposed to punishment.

Prosecutors never should have been allowed to transfer Berumen’s case out of the juvenile system, Kennedy said. Soon he’ll try to get it moved back, to treat Berumen like the 17-year-old he was when he allegedly beat and strangled Waters.

Jumped into a gang at 9 years old, these Long Beach men now help others find healing