Hundreds upon hundreds of people marched through Downtown Long Beach on Sunday afternoon, demanding justice as cities across the nation saw demonstrations and some violent unrest stemming from the police killing of George Floyd in Minneapolis.

In Long Beach, several large groups of demonstrators chanted, “Hands up; don’t shoot,” “No justice, no peace,” and “Prosecute killer cops,” as they overwhelmed streets in Downtown and Alamitos Beach.

At one point, hundreds of the demonstrators sat down or took a knee, blocking Ocean Boulevard at Alamitos Avenue.

Long Beach resident Stacey Nettles, who was shouting “I am human!” said she was blown away by the turnout. “I didn’t expect this. We’re seeing so many people out here standing up for us. Hopefully this will bring change, because we need change.”

Shortly after 4 p.m., the crowds converged. A seemingly endless stream of well over 1,000 people marched east along Ocean Boulevard just minutes after the city declared a state of emergency and issued a curfew from 8 p.m. Sunday to 5 a.m. Monday.

Window of a parked cop car on the corner of Ocean & Pine smashed in by protesters. @LongBeachPost pic.twitter.com/pSU4V3IHTL

“Everyone in Long Beach should stay inside this evening, with the exception of first responders, people going to and from work, and anyone seeking or giving emergency care,” Long Beach Mayor Robert Garcia said.

Shortly after the announcement, a police SUV had its back window smashed on Pine Avenue. Several protesters pushed the vandals away and protected the cruiser and officers inside until motorcycle cops arrived to escort them to safety. 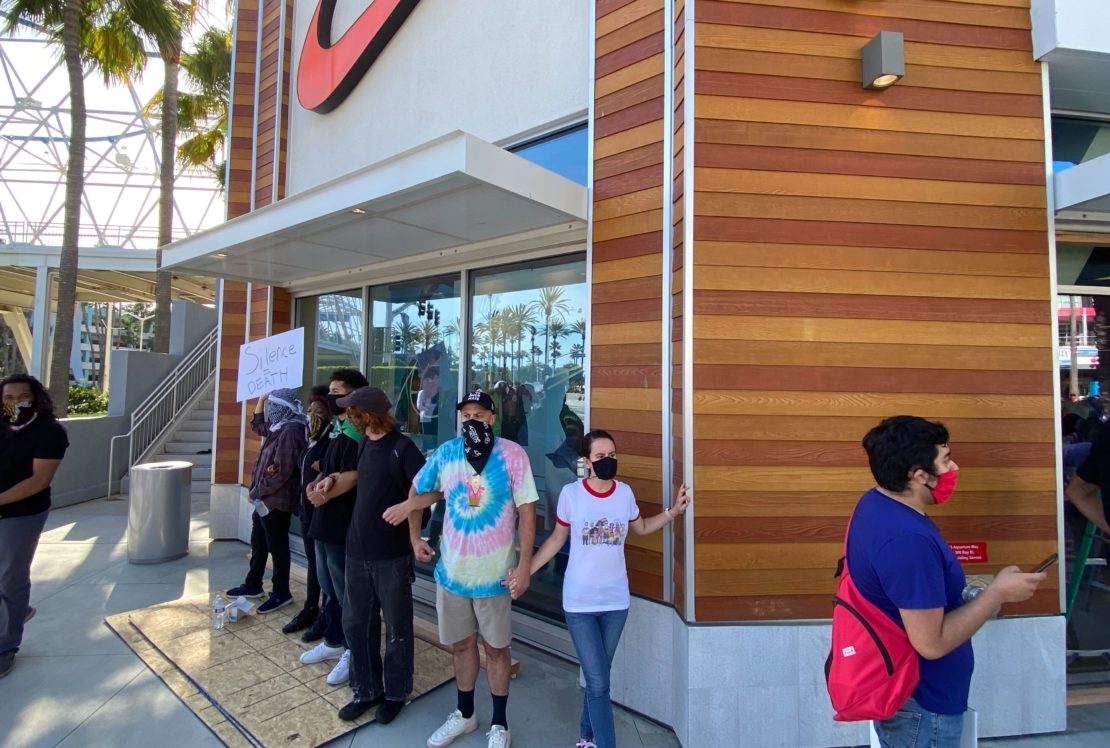 Protestors protect a Nike store in the Pike Outlets after some people tried to loot it. Photo by Kelly Puente.

At the Pike Outlets, a group considered breaking into a Nike store, but organizers protected it and the crowd changed “don’t loot.” Other people broke into a nearby Forever 21 store and carried out merchandise.

As the protest began about two hours earlier, officers let marches move freely around the Downtown area, but after the curfew was issued, police set up skirmish lines and prepared to order crowds to disperse.

In preparation for the large crowds, Long Beach police headquarters was surrounded by barricades. Business owners throughout Downtown Long Beach, meanwhile, had boarded up storefronts in reaction to the vandalism and looting seen in many other cities including Los Angeles this weekend. 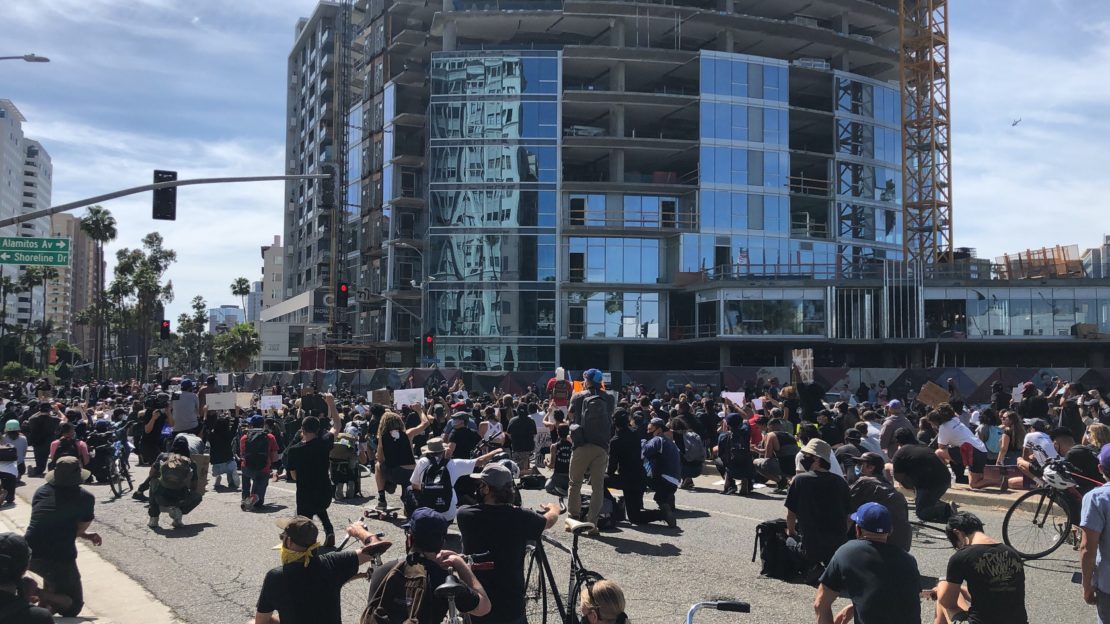 Participants and police in Long Beach, however, both emphasized they wanted today’s demonstration to be peaceful.

Faith Vialpando, 39, said she was there on Sunday to protest the police brutality that she witnessed while growing up in Long Beach’s once-rough Carmelitos housing projects. She said she wants things to be better for her 18-year-old son.

“I’m a mom and when I saw that video of George Floyd I didn’t see color, I just saw someone’s son,” she said.

Last week, video of a Minneapolis police officer pressing his knee into Floyd’s neck for minutes on end sparked outrage across the country. 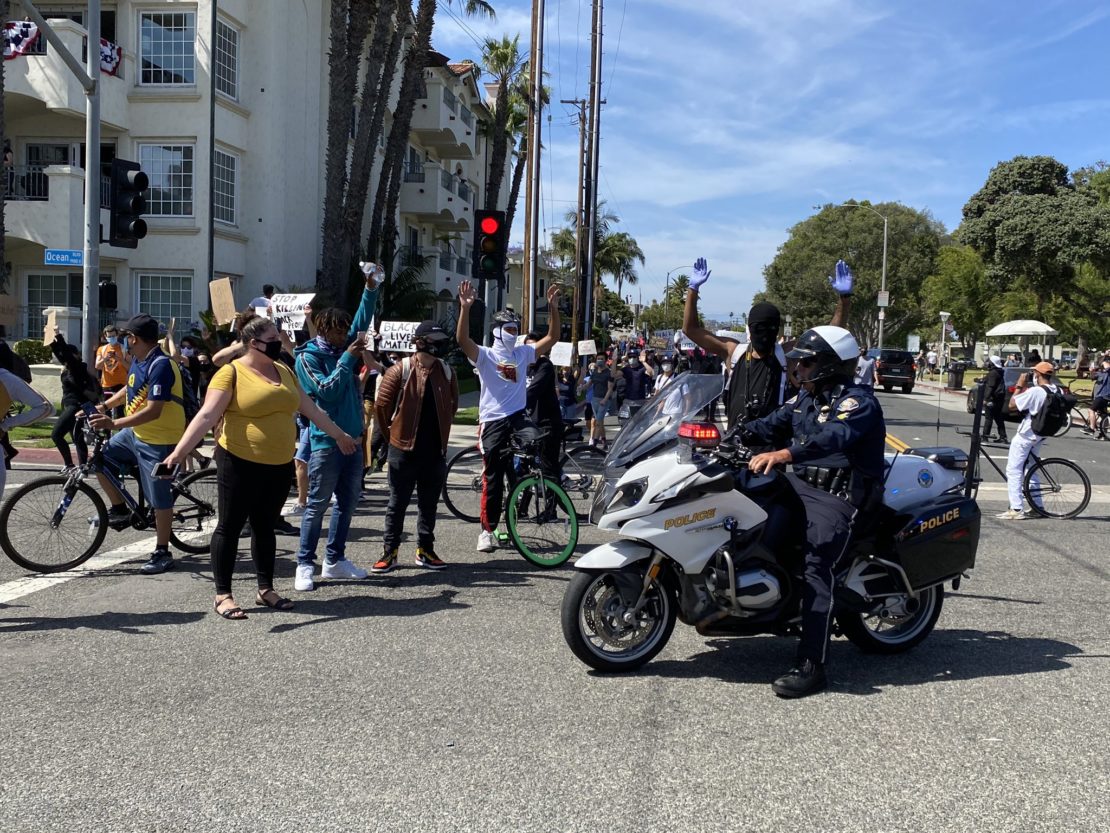 The officer, who is white, has since been charged with murdering Floyd and fired from the police force.

Long Beach’s chief has condemned Floyd’s killing, as have other law enforcement officials across the country.

However, in a statement released as the protests began, Garcia acknowledged the city and the country’s “dark and long history with race.”

“Over the last several days and after nearly three months of battling COVID-19 as a nation, we are seeing civil unrest and protests. We hear you and are listening,” he said on Twitter.

“Over the next few days we are expecting to see actions and demonstrations in Long Beach and for those who are choosing to participate, it is vital that you exercise your first amendment rights safely and without harm to life or property. Take care of each other and our community.”

Editor’s note: This is a developing story. Check back for updates.

Guys with skateboards are pointing marchers down Cherry Ave.. got some dubious, mixed explanations as to who is directing/organizing the march @LongBeachPost pic.twitter.com/KPVt5FDGtt