It’s hard to put into words what Shirley Jean Vaughan meant to all of us in the pet community. There were also the military veterans she supported, her clients, her neighbors, and her friends in Alcoholics Anonymous and at the Hosanna Church in Bellflower and Cottonwood in Cypress, where she regularly attended. It’s also hard to condense both her accomplishments and the pages and pages of quotes and memories that countless people expressed into a handful of paragraphs. It’s difficult, and it’s painful.

So was the shock of her sudden death to everyone who knew her. I was riding in a car when her friend and fellow animal advocate Margo Carter called and told me about it. She was barely able to get the words out, and I’m thankful that I wasn’t driving.

Shirley had been active and often took walks, went regularly to church, met with friends for lunch, and continued her work with pets. But after an emergency room visit on Dec. 20 when she was sent home with an advisory to call back the next day, she apparently never got to make that call. On Dec. 22, her cousin Sunny McNicol entered her apartment and found her sitting on her sofa with her television on and her cat by her side. Shirley was officially pronounced dead that day, but Sunny said that she was positive that she had died the day before.

“All that she accomplished came straight from her heart,” said humane educator Judy Crumpton. “It feels so strange referring to Shirley in the past tense—it will take some getting used to. Very sadly, the animals lost a true friend on Dec. 22.”

Shirley Jean Vaughan was born July 1, 1948, to Pauline and Von Vaughan in Denver, Colorado. Her sister, Theresa, was born exactly two years later, so they shared a birthday.

“That made it easier for Aunt Pauline, but both girls hated it,” Sunny said.

Shirley’s family moved to Long Beach in 1951 to be near Sunny’s family. The girls’ mothers were sisters, and they grew up likewise.

“She was more than a cousin to me—she was a sister, and I cherish all my memories of her, even the not-so-pretty ones,” Sunny said. “My best memories of Shirley involve playing in her neighborhood on Fairbrook Lane and getting into the kind of trouble only two cousins five months apart can manage.”

Shirley married three times, and when the third ended, she took back her surname at birth. Sunny said that she was a pretty wild child. 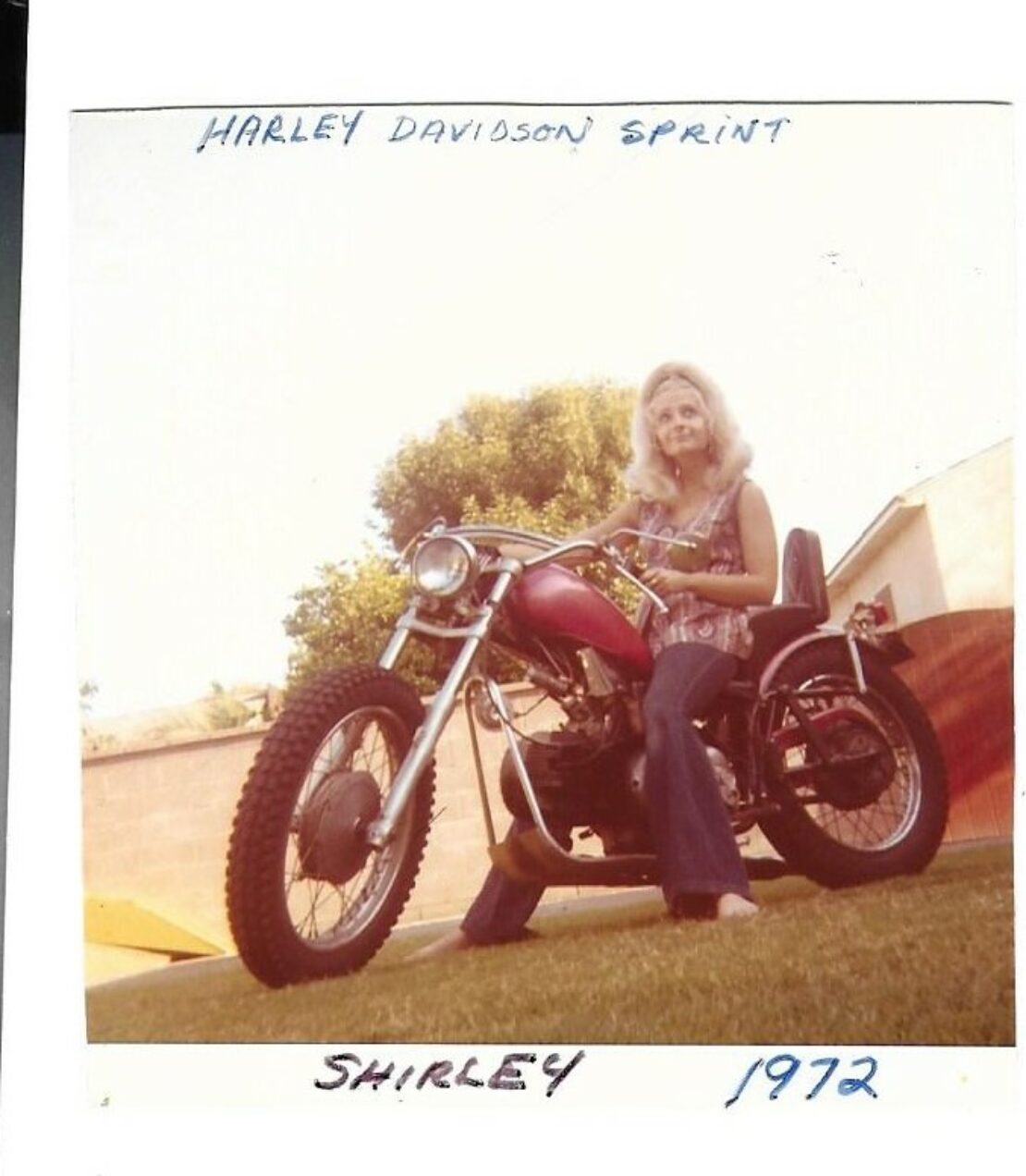 Shirley Vaughan, her trademark moxie and grit evident, loved riding her Harley back in the day. Photo courtesy of Sunny McNicol

“She and her husband Carney rode motorcycles, and she had her own,” Sunny said. “Her CB call sign was Purple Haze. She was far more a hippie girl than I ever was but she lived life to the fullest until the end. She was always volunteering, whether it was with or for the animals, at the Memorial Hospital Cancer Center, the Veterans or with her AA groups—she was very involved and developed friendships there. As we grew older, we didn’t get into much trouble anymore but we did stay close, sharing lunches and movies, our faith and our churches and our holidays.

Shirley will be most remembered as co-founder of Friends of Long Beach Animals (FOLBA), along with fellow animal lover Nona Daly, in 1989. She was the organization’s president for about 25 years before stepping down, but she continued her involvement by answering the countless phone calls about vouchers and pet placement in the office. Her experience as a desk clerk for a few years at Long Beach Animal Care Services—yes, that’s on her resume, too—served her purpose well.

“I met Shirley when I still had my shop [Nona’s Frames on Second Street, where there was always a cat to attract clients] and was showing shelter cats to help find homes,” Nona said. “I was at the shelter one Saturday morning to pick up a cat and met Shirley. She invited me to join Friends’ board and, of course, the rest is history. I can’t imagine how different my life would have been had I not run into her—I’m still having trouble believing she’s gone.”

Shirley’s devotion and action have in great part contributed to the benefits that shelter and rescue pets have received and continue to receive from FOLBA. During Shirley’s years as organization president and afterward as a board member emeritus, Long Beach Animal Care Services and several rescues received such gifts as medical and surgical assistance, supplies, a play-yard fence, veterinary-medical structures and surgery tools, donations and, most importantly, homes. I have Shirley to thank for Mildred, my abused little girl who came to me as a Shirley-inspired foster 15 years ago and hasn’t left yet.

Shirley also helped trap feral cats, some of them at her future home at American Gold Star Manor, and got them spayed and neutered. She transported shelter cats to veterinary offices and businesses around the city, where they’d lollygag in kennels waiting for adopters to come.

“As each applicant indicated an interest in adopting, Shirley would interview them and decide if the home would be appropriate,” said Margo Carter, former FOLBA treasurer and also a board member emeritus. “Shirley was hands-on in placing the homeless and abandoned cats.”

I witnessed this up close and personal when one of my good friends became enamored of a cat at Nona’s shop, and Shirley and Nona sat with us at Hof’s Hut on Second Street. Not satisfied with Kathy’s status as a friend of mine, the two of them grilled her more thoroughly than the cheese sandwich with fries at the next table. (Kathy got the kitty and had her for 15 years, when the cat passed away.) 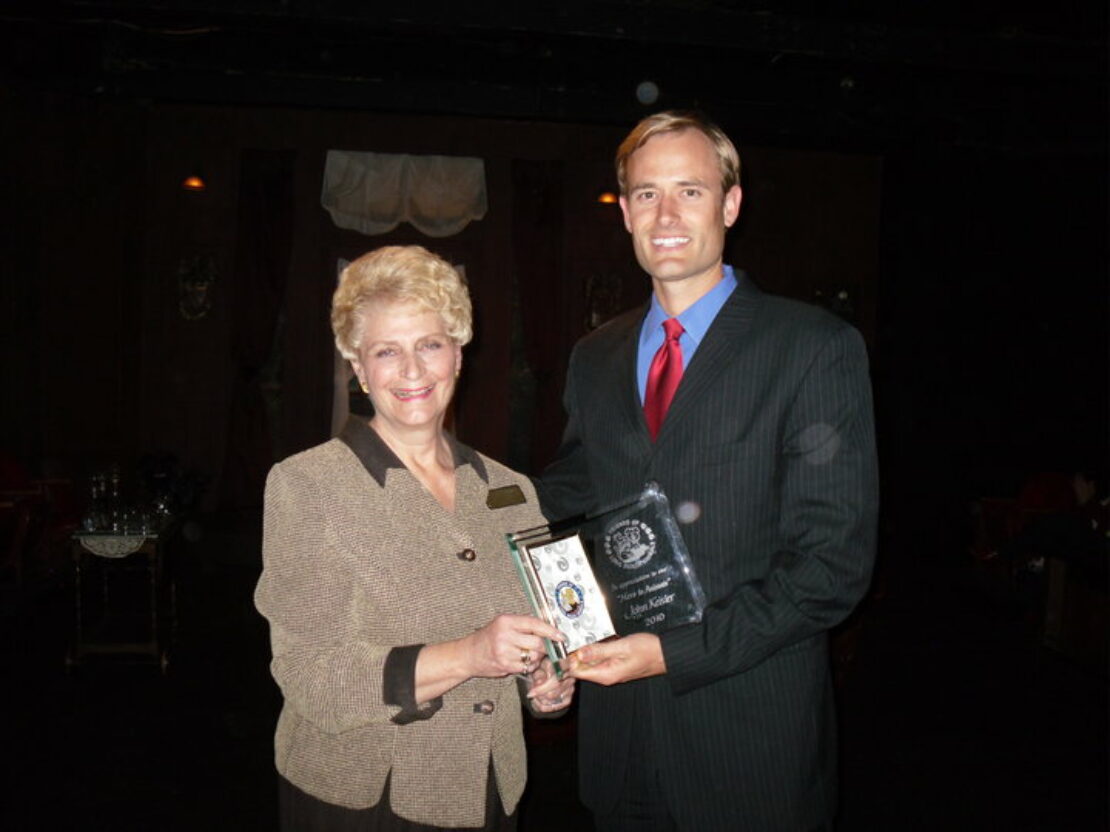 In 2010, then shelter director John Keisler presented Shirley with the well-deserved Hero to Animals award. Photo courtesy of Friends of Long Beach Animals

Helping to prevent multiple births of cats in the wild as well as mitigating shelter overpopulation was one of Shirley’s passions. She, Nona and Margo created SNIP (Spay/Neuter Incentive Program) in 1998. Until it recently sunsetted, the program sponsored over 18,000 free spay/neuter procedures for cats and dogs.

Her heart went out to canine police officers, too. Shirley joined the Long Beach Canine Officers Association board in 1998 and helped to raise money for training and medical care for the dogs and maintenance for the K9 cemetery near the police academy and firing range. She was elected vice president in 2001 and remained in the position up to her death.

“Shirley was an active participant in fundraising at the tables at the annual K9 car show and whenever Second Street would have its car show,” said Nancy Cotton, the nonprofit’s financial and correspondence secretary. “Her longtime support assisting at our fundraising events and input at the board meetings will be greatly missed.” 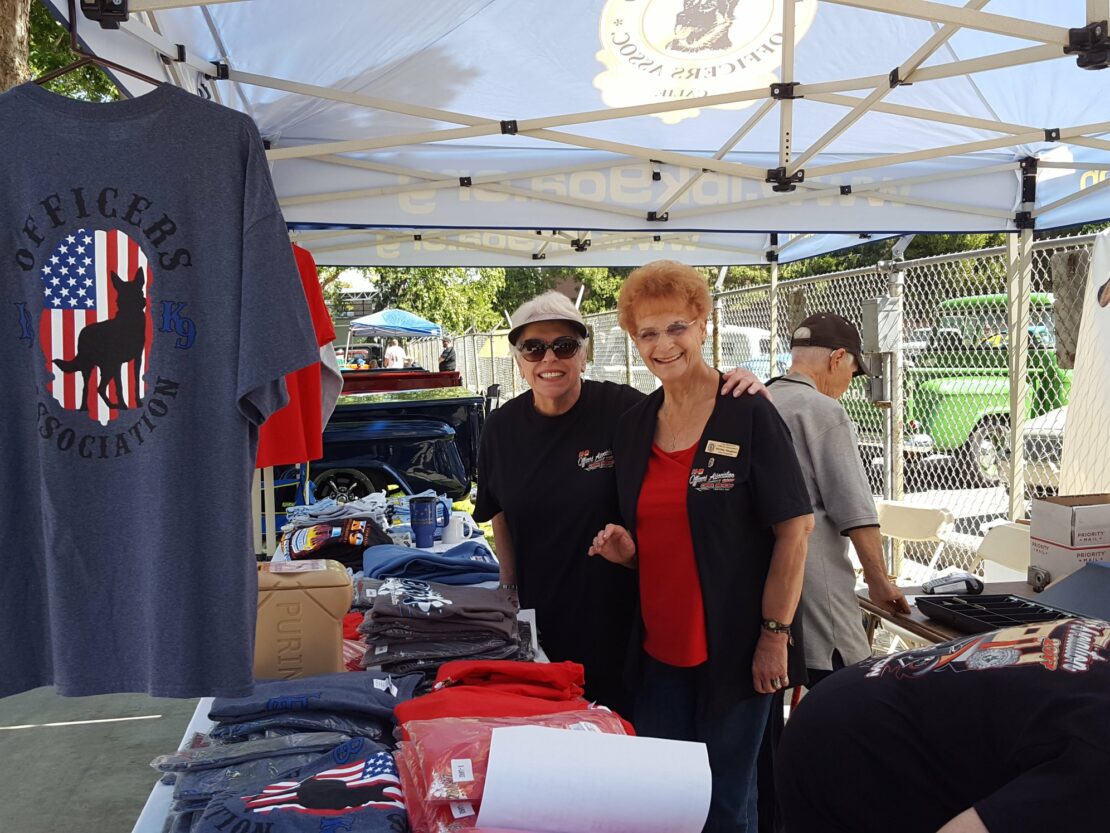 Shirley, pictured with former LB K9 Association board member Lynn Englehart, was invested in the well-being of the LBPD’s canine officers. Photo courtesy of LBK9 Association

Those who remember watching the late Fred Bergendorff’s “The Pet Place” TV show will have seen Shirley on every episode, along with Nona, Nancy Cotton and animal-control officer Louise DuBois. The group would bring animals from the shelter to appear on camera and glean enough celebrity cachet to get adopted.

Her truck, with its distinctive license plate “SVPWPWR,” put in as much work as Shirley herself did, schlepping big stuff to the FOLBA fundraisers at the Long Beach Playhouse and towing the float in the Belmont Shore Christmas Parade and Veterans Day parade. 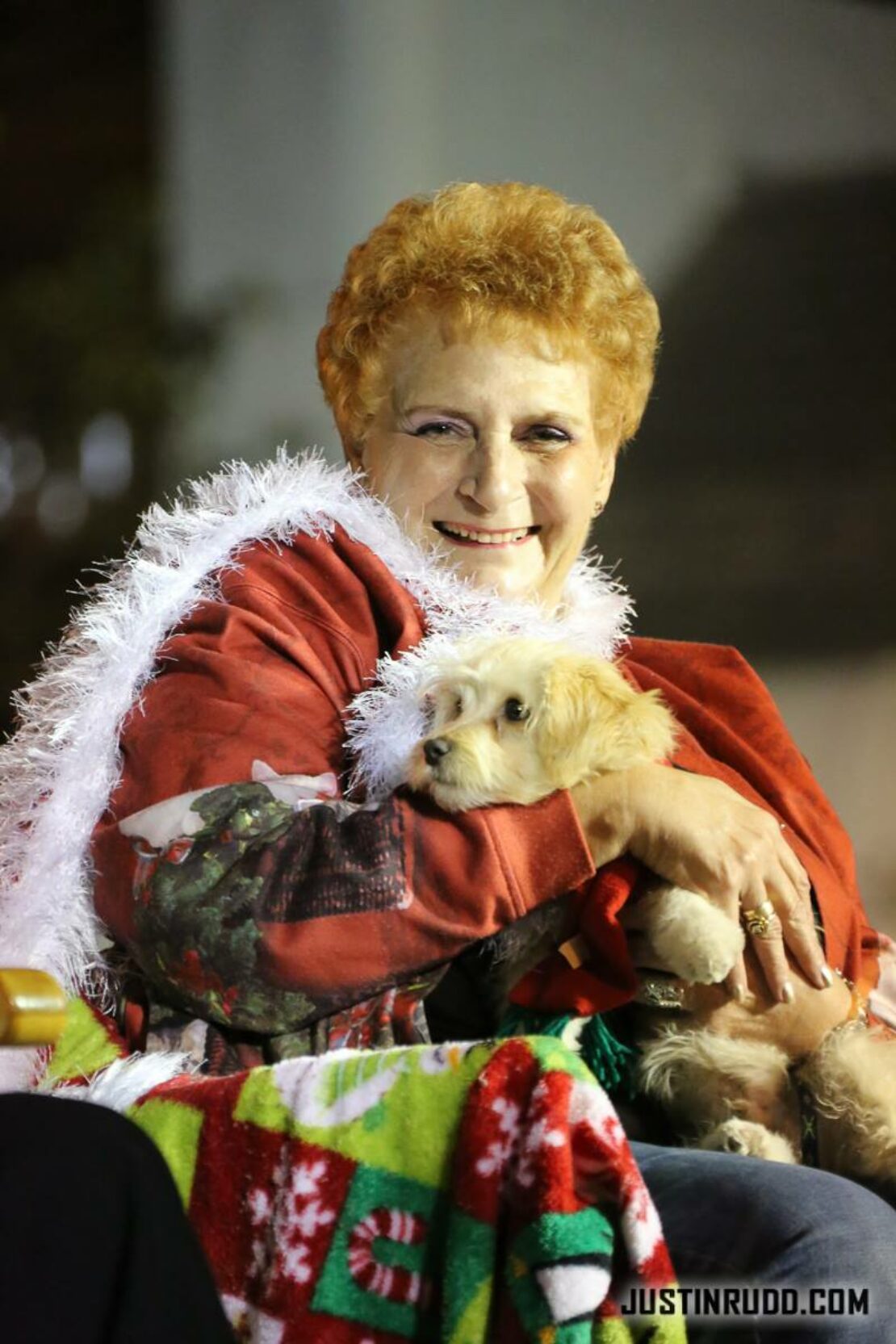 Shirley even managed to coax Long Beach Post columnist Tim Grobaty, then scribbling for the Press-Telegram, out of his cubicle to bring his dog Jimmy to lead a couple of WALK for the Animals FOLBA fundraisers.

“All Shirley had to do was ask—Jim was a glory hog,” Tim said.

At the closing of the Jan. 4 City Council meeting, Mayor Robert Garcia gave a tribute to Shirley in which he summed up her calling as an animal advocate.

“Shirley has been an incredible part of this community,” Garcia said. “We’ve all seen her at so many events, we’ve seen her activism, we’ve seen her care, particularly her love for her community and for all animals across our city. She’s going to be missed—a really incredible woman for those who’ve had a chance to know her.”

When I’d call Shirley and she wasn’t home, the last thing she’d say on the recorded message was “And remember—always be kind to animals.” We will, Shirley. We promise.

Shirley’s cat, Jet, needs a new home. Jet is a beautiful, sleek, black Manx cat with a thick coat and bright yellow eyes. He’s about 9 years old and has been neutered, microchipped, and vaccinated. He’s also had dental care. Jet, as can be expected, is anxious, hides a lot, and is probably an escape risk. Anyone wishing to adopt him should be willing to allow Jet to be Jet and understand anxiety in animals. Contact [email protected] if you’re interested in adopting Jet.

A celebration of Shirley Vaughan’s life will take place from 2 to 4 p.m. Saturday Jan. 29, at MWA, 835 E. 33rd St., Signal Hill. For inquiries, email [email protected], which Sunny McNicol is monitoring. Donations in Shirley’s memory to Friends of Long Beach Animals or the Long Beach K9 Officers Association would be greatly appreciated.