The Long Beach Independent Redistricting Commission continued its series of outreach meetings Wednesday night at Poly High School, which sits near the heart of what could be one of the most disputed districts where the majority of residents are Latino but Black and Cambodian communities are seeking more power.

Poly is in the city’s 6th Council District, which stretches from Gardenia Avenue to nearly the 710 Freeway and from 10th Street in the south up to Spring Street in the north. The district is home to much of Cambodia Town, but portions of the neighborhood were also splintered into three other City Council districts during the last redistricting in 2010.

The current redistricting process could dramatically change City Council district lines—shifting who is eligible to vote in those races and potentially changing where some residents would go to get help for district-specific issues. City staff and elected officials helped draw the existing lines but are now barred from the process.

The formation of the redistricting commission itself was fueled in part by Cambodian activists who helped petition for and write the ballot language for Measure DDD, which created the Independent Redistricting Commission after voters approved it in 2018. 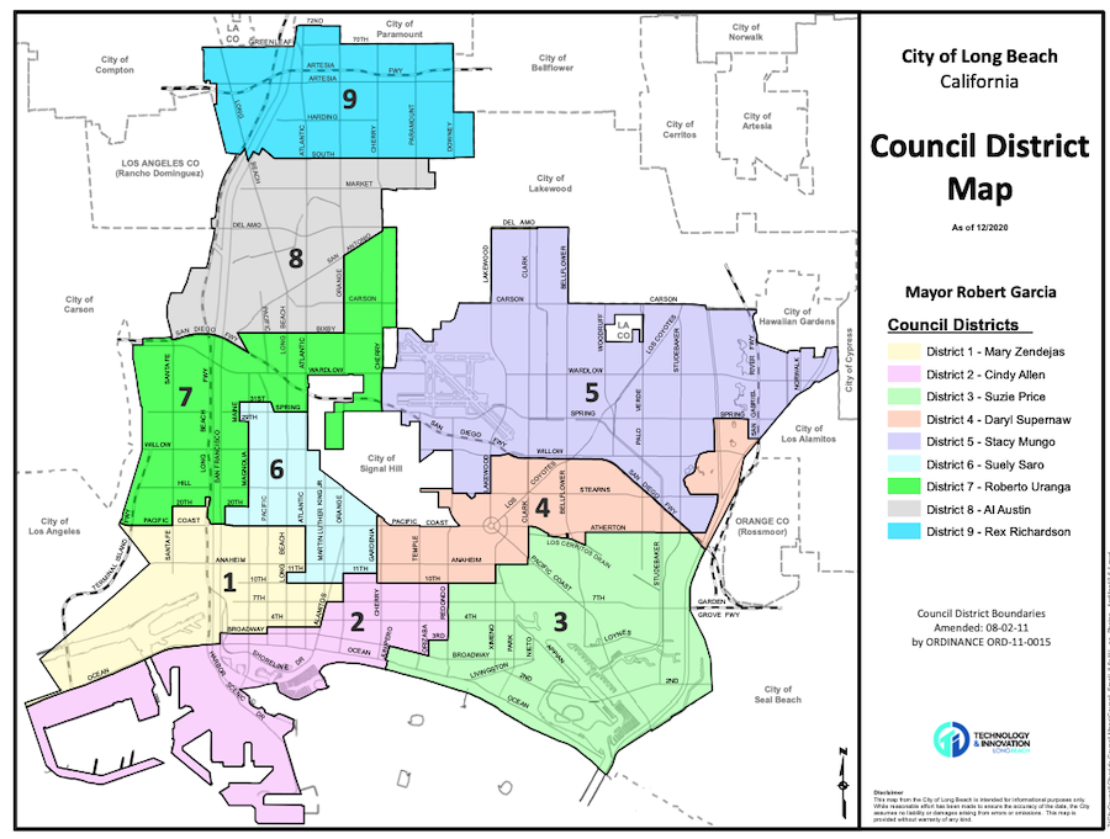 A screenshot of a Long Beach City Council District map. These lines are in the process of being redrawn by the city’s redistricting commission.

Now, those activists called on the commission to unify their community into a single voting bloc instead of leaving it split up among several districts, something some organizers believe they were promised during the ballot measure process.

“You cannot change the Killing Fields; I lost many family there,” said John Chen, a community activist who urged the commission to unify Cambodians. “But you can start the healing now.”

Cambodians started relocating to Long Beach and other cities across the world in the mid-1970s as they fled genocide and war in their home country. Many of them settled in Long Beach, but it wasn’t until 2020 that Councilwoman Suely Saro became the first Cambodian to be elected to the council.

A number of speakers denounced a legal opinion shared with the commission earlier this year suggesting it should use existing district lines as a starting point when drawing its own map later this year.

Some suggested the commission fire the city attorney and hire independent counsel to maintain autonomy from the city.

Senay Kenfe, a resident of the district and a business owner, said that the Black community had been historically bound to Central Long Beach due to discriminatory housing practices that forbade them from living elsewhere.

Kenfe said his community was worried about the intentions of the commission and the possibility it might disenfranchise the large clusters of Black residents that live in the current 6th District boundaries.

“We’re worried that we’re going to be written out of the agenda of what this district looks like,” Kenfe said.

Current population estimates presented to the commission earlier this year based off of surveys conducted by the United States Census Bureau show that Latinos make up about 55% of the district’s population followed by Asian residents (19%) and Black residents (14%).

The commission is not expected to receive updated Census data until sometime in September, and it can’t begin drawing new district lines until that happens. The process is expected to conclude by the end of the year.

There is also concern from those not living in the district that drawing district lines specifically to unite Cambodians could set off a ripple effect across the city.

Former Councilwoman Rae Gabelich, who represented the city’s 8th District, said she supported unifying Cambodians but cautioned the commission that disregarding existing district lines entirely when they begin to draw new ones would be troublesome.

“To say you’d start all over with all districts which could totally tear apart our neighborhood communities, that would be a terrible injustice for Long Beach,” Gabelich said.

The commission’s next two meetings are scheduled for July 28 at Longfellow Elementary School and Aug. 4 at McBride High School. The commission announced Wednesday it was pushing back meeting start times to 6:30 p.m. for all future outreach meetings to allow for more people to attend.

Editors note: This story had been updated to include the correct date of the meeting at McBride Middle School.