Goal of unifying Cambodians into one voting bloc could be in jeopardy, activists worry • Long Beach Post News
- ADVERTISEMENT -

Activists who pushed for an independent commission to redraw City Council district lines are now growing worried that their goal of empowering the Cambodian community is in jeopardy.

The Independent Redistricting Commission, established by a ballot initiative in 2018, is just getting started with its work as Census data is months away from being released. Its highly political task could shape the balance of power on the City Council, which passes laws and budgets and guides city policy that affects every resident.

Activists including Common Cause and Equity for Cambodians campaigned for the measure in hopes that the city’s Cambodian community, now scattered mostly among two council districts, will be unified into one district for more voting power.

But a recent letter issued by the city attorney’s office suggested the commission use the current district lines as a basis for starting the process in order to preserve neighborhood cores, rather than starting from scratch as activists want.

“Starting from districts that elected officials drew for themselves was definitely not our intent with this measure,” Dan Vicuna, national redistricting manager at Common Cause, said of Measure DDD that established the commission.

Redistricting is required by federal law to happen every 10 years after the release of Census data, however, this year’s process has been slowed by delays related to the pandemic.

Lines drawn this year will create new districts that will dictate who gets to vote in which elections for the next decade.

The lines cannot be drawn until that data is released to commissioners, and Vicuna said the intent was to start from scratch, not from existing council district lines, despite the city attorney’s letter stating that wasn’t the intent.

Vicuna’s group has worked to fight back against gerrymandering—the process of drawing political lines to illegally favor a certain party or group—and put that process into the hands of independent bodies made up of residents.

He said that the city’s letter stretches the wording of the charter to make the case that starting from existing lines is the correct thing to do.

The letter from Olson Remcho analyzed a section of the city’s charter dealing with numbering districts and opined that it means that the commission should start drawing new lines by using the existing districts as a starting point.

Drawing legal lines requires districts to be as close as possible in population—Long Beach allows a 10% deviation between districts—contiguous and in line with federal and state laws.

The city’s charter outlines eight priorities that need to be considered in order when drawing lines, with minimizing neighborhood division and protecting communities of interest at the top, and having lines that correspond to Census blocks at the bottom of the list.

Yet, the letter states: “The commission shall number each council district such that, for as many residents as possible, the number of [the] council district they reside in remains the same,” which is not part of that priority list.

The city manager’s office did not respond to requests for comment on why the city pursued the legal opinion.

Vicuna said that Common Cause and other groups are working on a formal response to the letter but they’re hopeful that the commission remembers that they have a mandate that grants them independence from the city during this process.

“The city attorney has an administrative role but they’re not the Supreme Court of the city,” Vicuna said.

The commission voted 8-5 earlier this year to not include the city attorney’s opinion as part of its criteria when drawing lines, however that was one vote shy of the nine needed to approve the motion. 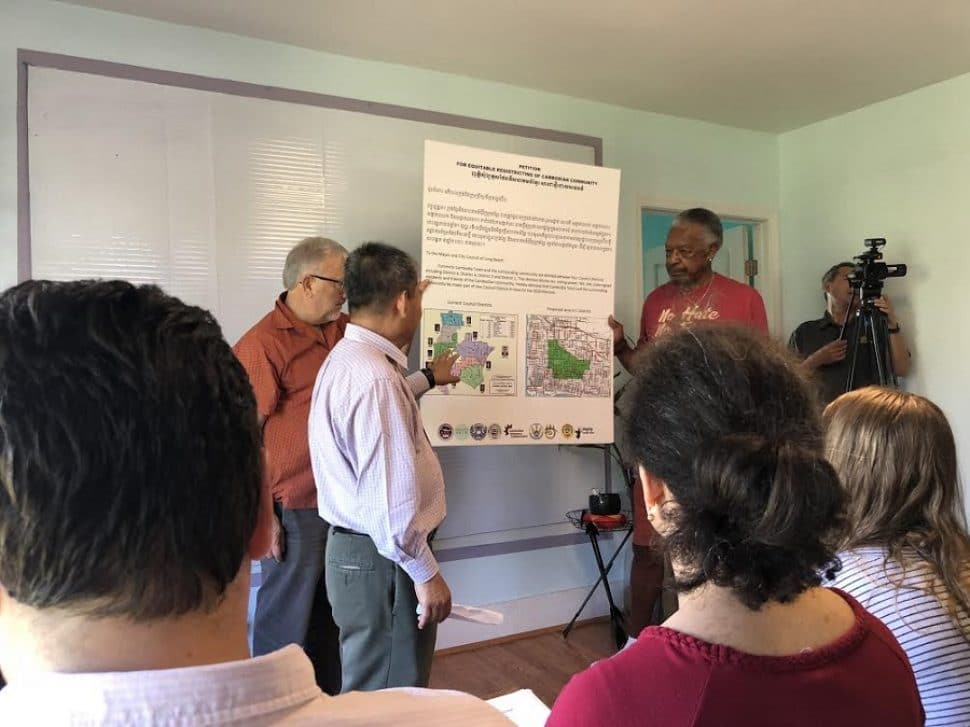 Members of Equity for Cambodians answer questions from the public regarding a proposed charter amendment that would create an independent redistricting commission. File photo by Stephanie Rivera.

‘The short end of the stick’

Justin Levitt, a political science professor at Cal State Long Beach who has done extensive analysis on the Census and California’s Voting Rights Act’s effect on redistricting, disagreed with the city attorney’s position.

Levitt said that part of the charter is there to ensure that as many people as possible maintain the same district number, not necessarily that the same boundaries are adhered to when drawing new maps.

He referenced work he did as a consultant in San Diego where the district lines were drawn and then an analysis was done to see what percentage of people within those new lines were in a given district before.

“But that was something we did after the lines were drawn,” Levitt said.

While the equal population requirements and federal laws protecting voting rights make it hard to make promises that certain groups will be grouped into certain districts, Levitt said it is his belief that the authors were trying to avoid what happened in 2011 to Cambodians in Long Beach.

Levitt said that Asian groups have historically been split at the expense of others in California, pointing to the San Gabriel Valley where district lines have favored Latino populations while splitting Asian votes. Conversely, Levitt said that Orange County tried to rectify this issue during the last redistricting process and ended up splitting up Latino communities to unify Asian communities.

“If you have two protected classes who ‘wins out?’” Levitt said. “The Asian population has often gotten the short end of the stick.”

The city attorney letter argues that starting from the current lines is a defensible practice because the districts were never challenged legally and have been widely accepted by the community. It added that a court should give deference to the commission if it chose to draw new lines based on the old ones.

Levitt said that “legal” means it went through an appropriate channel, adding that every law is presumptively legal until it’s challenged.

Based on estimated population changes, four districts in the city have shrunk in population while others have gained, according to data from the American Community Survey.

The largest population gain is projected to happen in the city’s District 5, where an estimated 1,375 more people now live. The biggest projected decrease (1,166) could happen in District 6, home to most of the city’s Cambodian population.

The city’s District 3, which includes Belmont Shore, Naples and Cal State Long Beach, could be subject to an undercount because so many students were forced to move home during the pandemic.

Estimates of how many Cambodian and Cambodian-Americans live in the city have reached as high as 50,000, which is about 20% of the 276,667 persons of Cambodian descent counted in the United States during the 2010 Census.

The Cambodian population in Long Beach has existed for over 40 years but it wasn’t until November that the city’s first Cambodian City Council representative, Suely Saro, was elected. 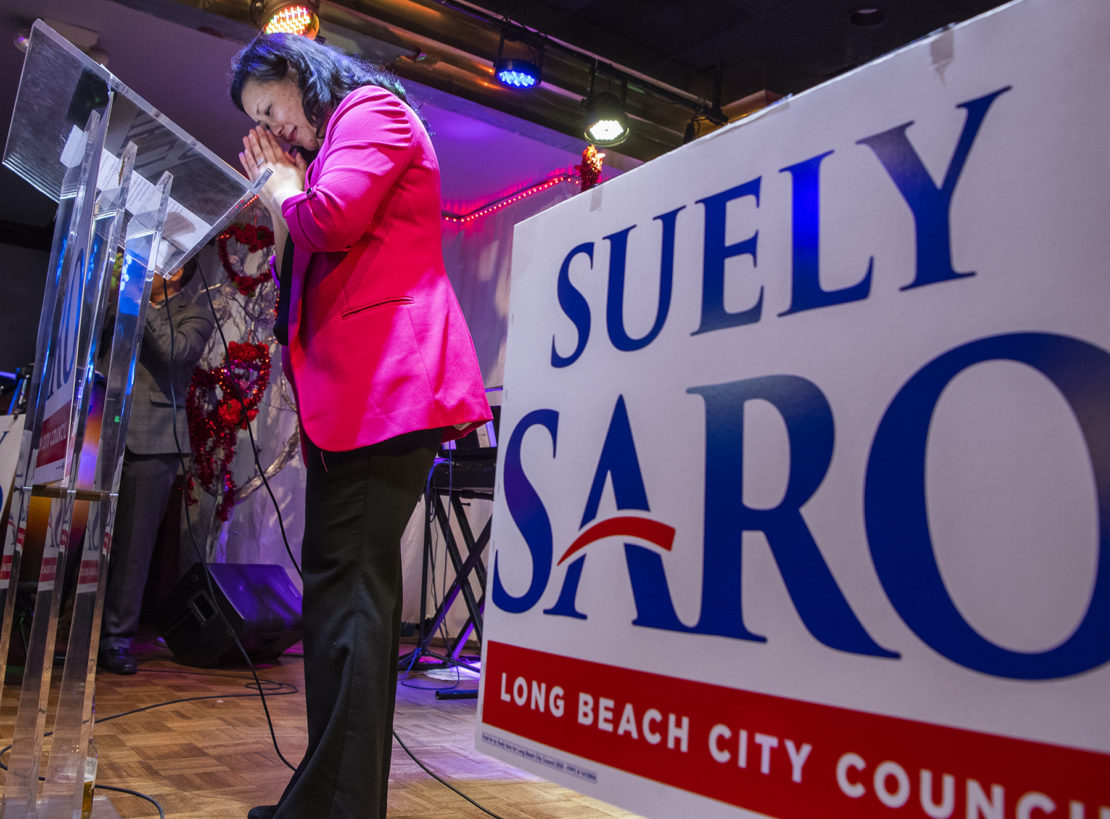 Laura Som, director of the MAYE Center in Cambodia Town and one of the lead advocates for Equity for Cambodians, said Saro’s victory required more work because the Cambodian community that wanted to support her was divided.

“More than 70% of the time we had to inform people that they couldn’t vote for Suely Saro because they didn’t live in the district,” said Som. “They really wanted to take part in this history but unfortunately their voice didn’t count.”

Som said that the way that current district lines are drawn Cambodia Town, located in the center of the city south of Pacific Coast Highway, is split with nearly half of it in another district.

She said she was shocked to see the letter from the city attorney and claimed it’s “perpetuating the same grievances against the Cambodian community from 2011.”

Proposed district lines drawn in 2018 by Som’s group in the lead-up to the passage of DDD showed a district similar in size to the current District 6, but with the lines shifted east and south.

In that scenario parts of Wrigley and Memorial Heights would be ceded while parts of the Zaferia, Hellman, Rose Park and Central neighborhoods would be folded into the new district.

Saro, whose family fled Cambodia during the Khmer Rouge era in the 1970s, said that unifying the community would make it easier for a Cambodian to win office again, but it wouldn’t guarantee it. She noted she had to speak English, Spanish and Khmer on the campaign trail.

Having a shared experience and history is important to Cambodian residents, Saro said, adding that her run for council turned into international news, with calls coming from all over the country for family and friends encouraging others to vote for her. Not all were able to.

“There’s a desire to be represented and vote for someone who is from the community,” Saro said. “Having a Cambodian representing Cambodia Town adds that layer of pride.”

The commission is currently in the process of doing district-specific public outreach meetings in anticipation of Census data being released later this year. Commission meeting schedules, archived videos and forms to designate communities of interest can be found on the city’s website.