A political mailer sent out this week has made one of the most aggressive and controversial attacks yet in the race for Long Beach mayor, accusing one of the top candidates of trying to defund the Long Beach Police Department, a claim he disputes.

“Don’t Let Rex Richardson Defund Our Police. VOTE AGAINST HIM FOR MAYOR ON JUNE 7th!” the mailer says above a picture of a clothing store that burned down during a night of looting and vandalism in Long Beach, which broke out after largely peaceful protests for racial justice in May 2020.

Richardson is one of the frontrunners to replace Mayor Robert Garcia this year, and the mailer—funded by a committee supporting his main rival and colleague on the City Council, Suzie Price—bolsters its case against Richardson by providing a link to an audio clip of him at a community meeting in June 2020.

“Should we defund the police? Absolutely,” Richardson says. “Am I advocating to take out the police completely? No.”

In the clip, which is no longer accessible online, Richardson was speaking in favor of redirecting funding to “upstream” violence-prevention methods like libraries, after-school programs and job opportunities for young people that could help reduce crime without the help of police.

The mailer, which was produced by an independent expenditure committee that has received almost $39,000 from the union representing Long Beach police officers, has drawn a pointed response from Richardson and his backers, who say it misrepresents his position. 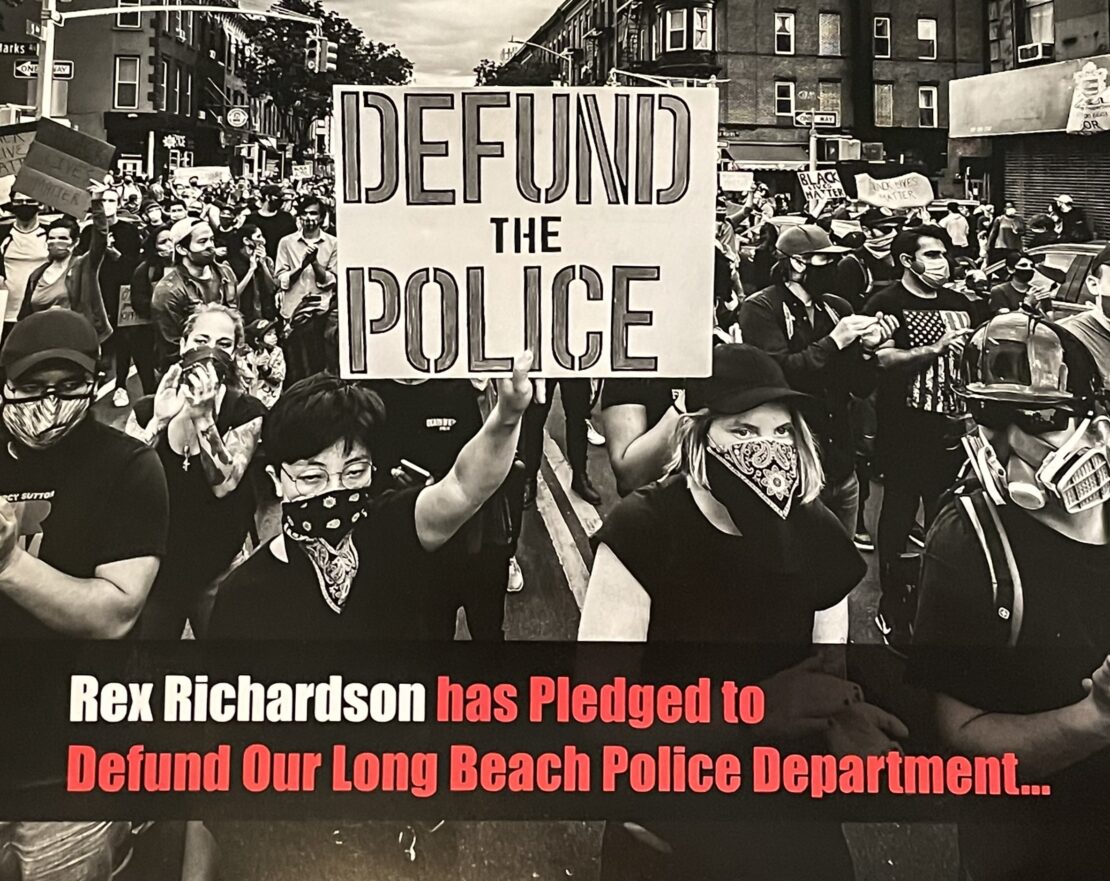 The front of a mailer sent to many potential Long Beach voters this week.

“I believe healthy and safe communities have a well-resourced police department to respond to criminal activity and emergencies as well as economic and educational opportunities,” Richardson said.

The mailer was sent by a recently formed political action committee called the Committee For A Safe And Strong Long Beach. Since January, it’s pulled in more than $230,000 in contributions from developers, unions, real estate and hotel groups supporting Price’s election bid. Campaign finance documents show that $38,333 of that total has come from the Long Beach Police Officers Association, which has endorsed Price, who works as an assistant district attorney in Orange County in addition to her position as a councilmember.

Although Price’s campaign is barred by law from coordinating with the independent expenditure committee, it echoed the attack Monday, saying the audio clip is an example of how Richardson takes different positions when speaking to different groups of people.

Richardson and his supporters have pushed back against the mailer. In an Instagram post, LBUSD School Board Member Juan Benitez, who has endorsed Richardson, called it “a hit piece on a progressive Black mayoral candidate” that was “two days removed from another horrific white supremacist mass murder in our country.”

After pictures of the mailer began circulating on social media Monday, Richardson’s campaign highlighted his policy proposals on public safety, which would enlist experts and residents to create a tailored approach to crime prevention and for the LBPD to hire and promote a more diverse police force. It also calls for investing in crime prevention but doesn’t say whether the money would come from police budgets or elsewhere.

Richardson also rejected a claim in the mailer that the audio clip shows he “absolutely” pledged to cut the LBPD’s budget by half. The councilman said he was referring to the LBPD budget being half of the city’s discretionary spending, not that he wanted to reduce it by half.

Richardson’s comment came during a series of meetings about a “Framework for Reconciliation” initiative he championed in the wake of 2020’s protests. He and other city officials hosted a series of meetings and listening sessions where community members were invited to speak about their experiences with racism, the police and other systems in the city.

The initiative hasn’t featured prominently in Richardson’s bid for mayor, but he says the essence is “threaded” through the policies announced by his campaign.

In this election cycle, many politicians are trying to thread a delicate needle with their messages on issues around crime and policing, according to Matt Lesenyie, an assistant professor of political science at Cal State Long Beach.

Despite a groundswell of support in 2020 for Black Lives Matter and the defund the police movement, Lesenyie said that it’s not surprising that we’re seeing more liberal candidates calling for funding the police as concerns about crime grow.

“What’s happened over the past few years is that the anger and the fervor seen during those protests have waned and the political calendar has presented candidates with a calculation to make over who is going to show up to vote,” Lesenyie said.

While Long Beach is now aligned with the state’s election cycle, the June 7 primary and Nov. 8 general elections fall into the national mid-term election cycle, something that has historically favored conservative voters because the president is not on the ticket.

California’s move to put off statewide ballot measures until the general election could further depress turnout in the primary, Lesenyie said, estimating that somewhere between 30% and 40% of registered voters should be expected to vote.

Lesenyie said that police funding is something that Democrats just don’t want to touch and have conceded it to the Republicans headed into this year’s election. President Biden has said multiple times he wants to “fund the police” and announced last week that he wants cities to use COVID-19 recovery funds on their police forces.

At the local level, Richardson and Price have voted similarly on police funding in recent years.

The 2020 police budget ended up being cut by about $10 million when the City Council adopted the fiscal budget in September that year but those cuts were self-imposed as most departments were asked to reduce spending as the pandemic blew a hole in the city’s finances.

City Council members actually softened some of those cuts by negating changes to the department’s K-9, violent sexual predator and park patrol units. A plan to replace LBPD helicopter pilots with civilians was approved but never implemented. The LBPD budget was increased by $16 million in 2021 to $285 million, nearly half the city’s general fund.

The City Council adopted the budget unanimously both times.

Editor’s note: John Molina, the primary investor in the Long Beach Post’s parent company, contributed $2,500 to the Committee For A Safe And Strong Long Beach, according to campaign finance records. He has no involvement in the editorial decisions of the Post. In an interview, Molina said he gave the money with no knowledge that negative campaigning would be involved, and had no knowledge of the mailer that went out.