A peaceful protest that drew thousands of demonstrators to the streets of Downtown Long Beach on Sunday was overtaken by widespread looting and destruction, which the city’s police chief said he had not anticipated.

The afternoon began with protesters marching down the middle of Ocean Boulevard, decrying police brutality and the death of George Floyd at the hands of a Minneapolis police officer.

But by sunset, police were firing rubber bullets trying to disperse protestors on Pine Avenue. Blocks away, crowds were breaking into stores at the Pike Outlets and elsewhere Downtown, fleeing with armfuls of stolen clothes.

Storefronts and walls throughout Long Beach were covered in graffiti with phrases such as “Stop Killing Us,” and “Anarchy in Long Beach.” Dozens of businesses throughout Downtown had their windows smashed and merchandise stolen.

Live television coverage captured scenes of car loads of emboldened looters rolling up to businesses, from chain stores to mom and pop shops, with virtually no police officers in sight.

A firework shoots off as demonstrators run at Pine Avenue and Broadway during a protest of George Floyd, in Long Beach Sunday, May 31, 2020. Photo by Thomas R. Cordova.

By 9 p.m., city officials said they’d asked for the deployment of the National Guard and other law enforcement agencies to Long Beach to help quell the looting and vandalism. City officials were still assessing the damage as firefighters rushed to at least one business engulfed in flames and officers belatedly chased off scores of looters carting off clothes, groceries, whatever could be stuffed into a backpack, car trunk or lugged out by the armload.

Chief Robert Luna, confronted with questions about the widespread looting, said the department’s leadership had not planned for the breadth of criminality that unfolded, despite violent eruptions just a day earlier in Los Angeles and cities across the nation.

“We deployed 4 or 5 more times the number of officers that we usually do on a Sunday. We brought in hundreds of officers. And, yeah, we’re going to debrief this at the end and figure out: should we have brought thousands in? I gotta tell you, maybe that’s the case. The expectation was that people were going to protest peacefully…But now we’re going to start dealing with it, and we’re getting those resources we need.”

By 2:30 p.m., there were hundreds of people outside the building, which had been fortified with concrete barriers and chain-link fencing overnight

The marchers headed east, picking up 20 or 30 people along each block until the group swelled to at least 3,000 strong and circled back Downtown. 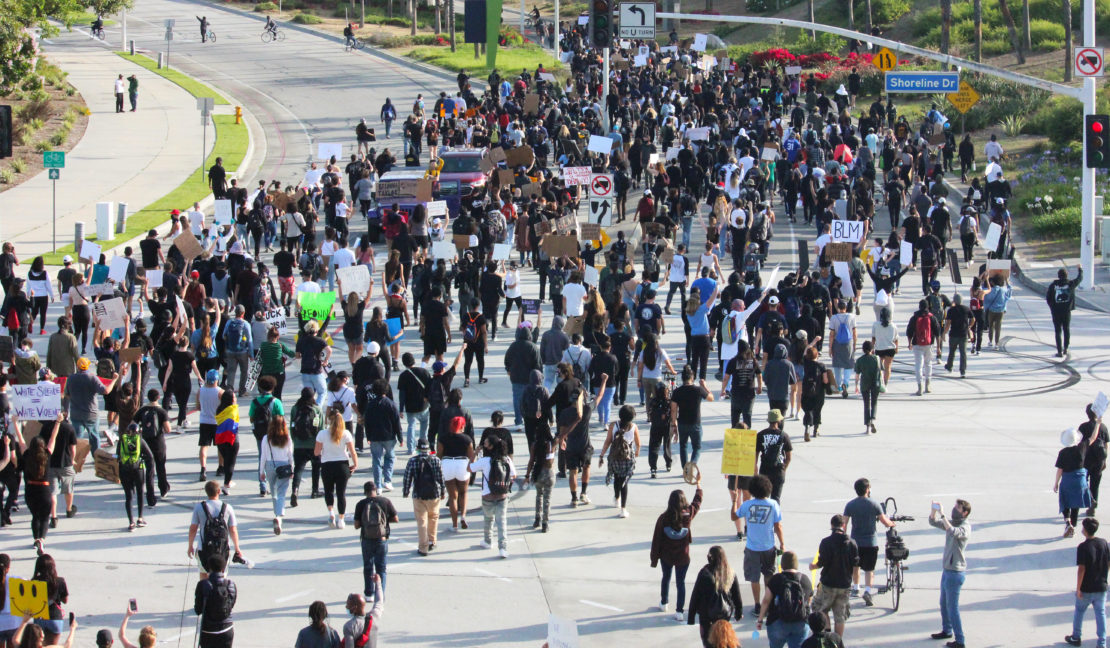 Protestors march across Shorline Drive toward the Aquarium of the Pacific in Downtown Long Beach, Sunday, May 31, 2020. Photo by Brandon Richardson.

At one point, the tenor of the protest seemed to change as the crowd came down Pine Avenue toward Ocean Boulevard and found 4 officers, standing in helmets and holding batons across a nearby alleyway.

A group split off from the march, yelling at the officers.

With attention focused on the confrontation, one man wearing a mask covering most of his face took what appeared to be a short-handled sledgehammer and smashed the back window of a police SUV parked a few yards from the 4 officers on Pine.

His actions drew cheers from some, but other demonstrators quickly pulled him away from the vehicle. When others tried to get to the SUV, protesters blocked them with their bodies. One of them appeared to have a lighter. 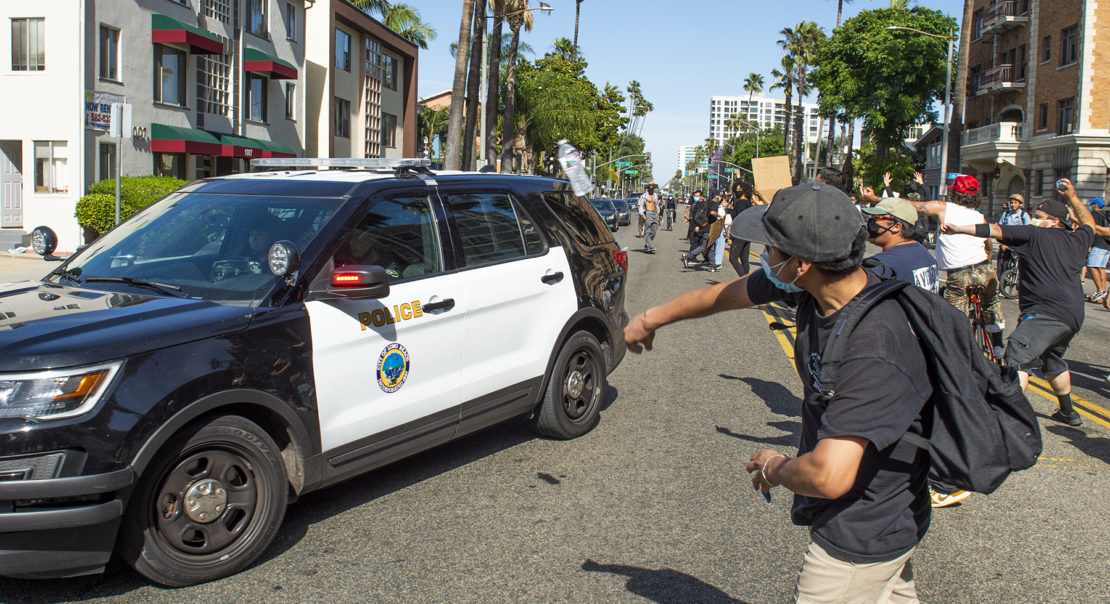 A demonstrator throws a water bottle at a Long Beach police as it comes through the crowd during a protest of the death of George Floyd, in Long Beach Sunday, May 31, 2020. Photo by Thomas R. Cordova.

Eventually, the 4 officers climbed back into the cruiser and were escorted from the site by a line of police vehicles as some protesters threw objects, usually water bottles, at them.

Around the same time, as the situation continued to deteriorate, the city of Long Beach issued an 8 p.m. curfew.

“This is vandalism,” LBPD tweeted with a picture of the cruiser’s smashed windows.

Soon after, the looting started. Luna said it began with a group breaking away from the main protest and heading toward the Pike Outlets. 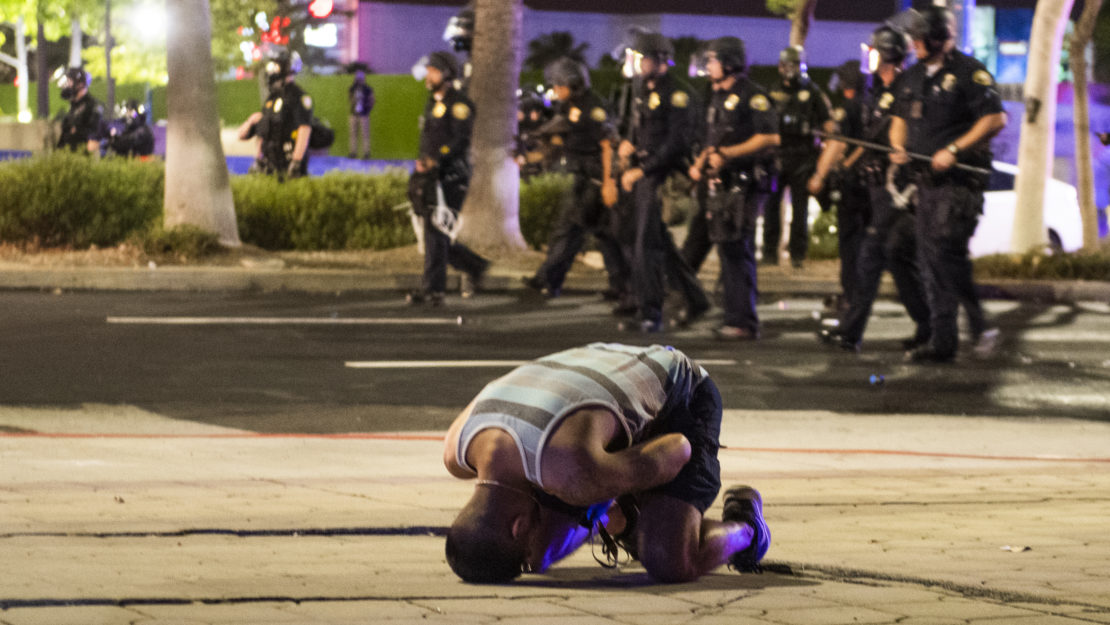 A man lies on the ground after being hit by a less-lethal weapon while protesting at Ocean Blvd during a protest of the death of George Floyd, in Long Beach Sunday, May 31, 2020. Photo by Thomas R. Cordova.

There, groups smashed windows of Forever 21 and The Guess Store and ran off with armfuls of merchandise as others yelled “please stop” and “don’t do this.”

At one point, they smashed through a metal security gate at Kay Jewelers, ransacked a Hot Topic and then scattered as Long Beach Police SWAT marched slowly through the street.

Citing police intelligence, Garcia said he believed the people looting were from outside of Long Beach and were trying to take advantage of the situation. The majority of demonstrators, he said, were peaceful.

As the looting continued, a standoff developed further north. 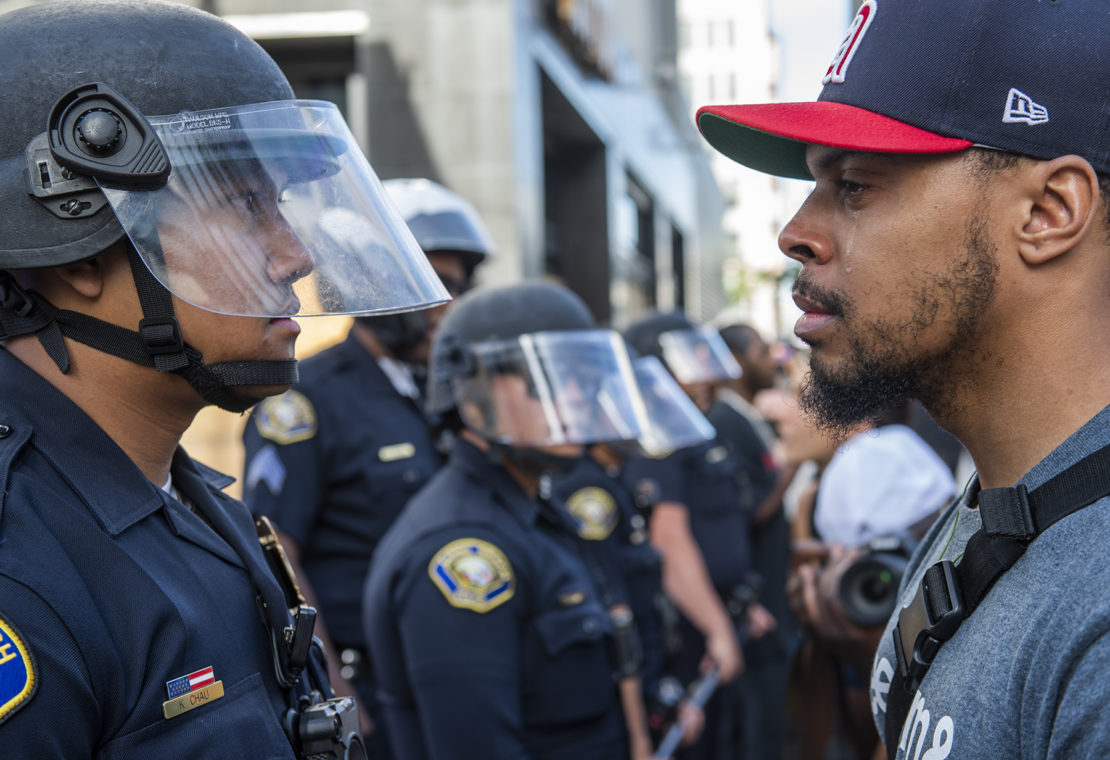 Kevin Anderson stands toe to toe with a Long Beach police officer as he sheds a tear during a protest of the death George Floyd, in Long Beach Sunday, May 31, 2020. Photo by Thomas R. Cordova.

A majority of the group was peaceful, sometimes taking a knee in front of officers, who had earlier fired non-lethal rounds at some protesters.

Friends Cheyenne Williams, 19, and Jaylenne Thatch, 20, held hands as they backed away from the police line saying, “We have our hands up. Don’t shoot!”

The pair, who are both from Long Beach, said they came to protest what they’ve said is long-time police brutality in the city.

“I see every day these cops terrorizing us,” Thatch said. 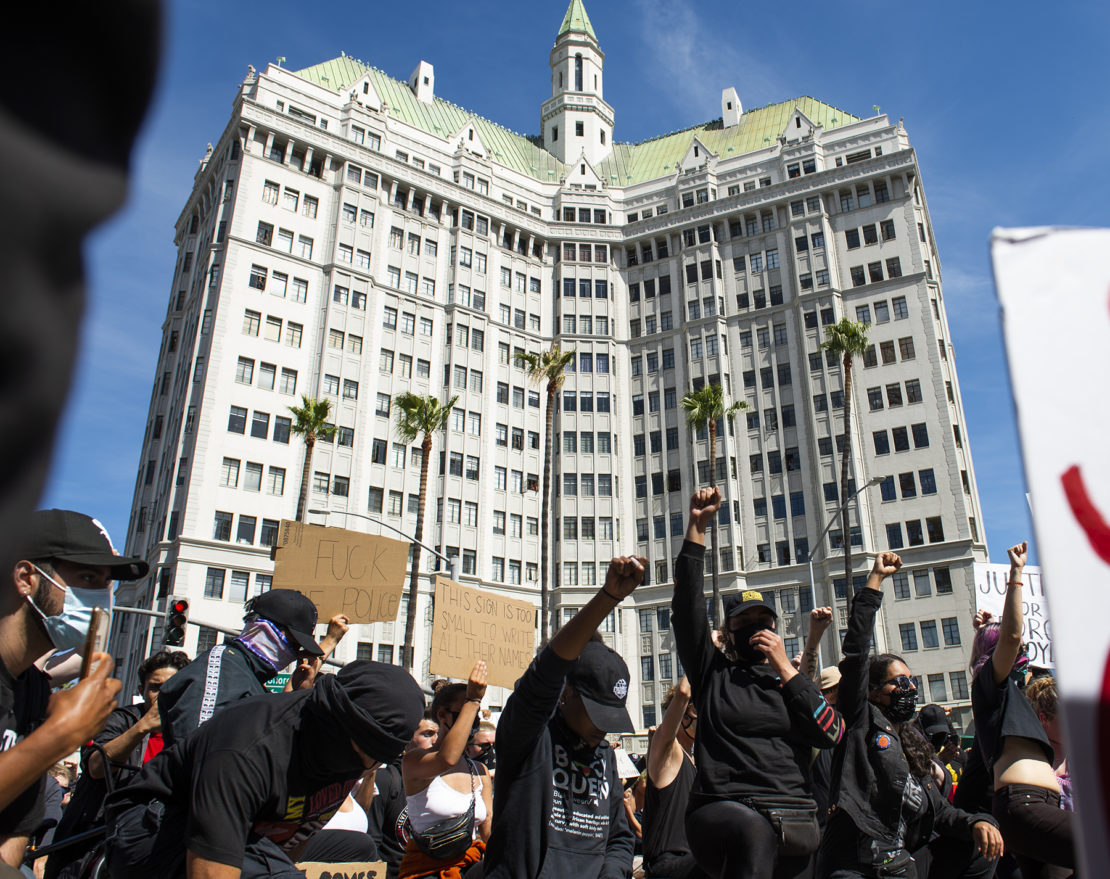 Demonstrators pause at Ocean and Alamitos as they put their fists in the air at a protest of the death of George Floyd, in Long Beach Sunday, May 31, 2020. Photo by Thomas R. Cordova.

At one point 3 women were burning sage. One protester was going around with a clear plastic bag picking up trash. A protester dragged in an 8-foot-tall purple painting of a tree and stood in front of the police with it.

Protesters closest to the line of police would turn away anyone who appeared to be approaching the officers in order to incite. At one point a woman confronted a man who was holding a hammer, yelling at him to put it down and leave.

Some protesters appeared to be trying to talk to police officers in the line, sharing their grievances.

Others in the crowd lit off fireworks over the intersection, prompting protesters to shout at them to stop, saying “that’s why they’re shooting at us.” 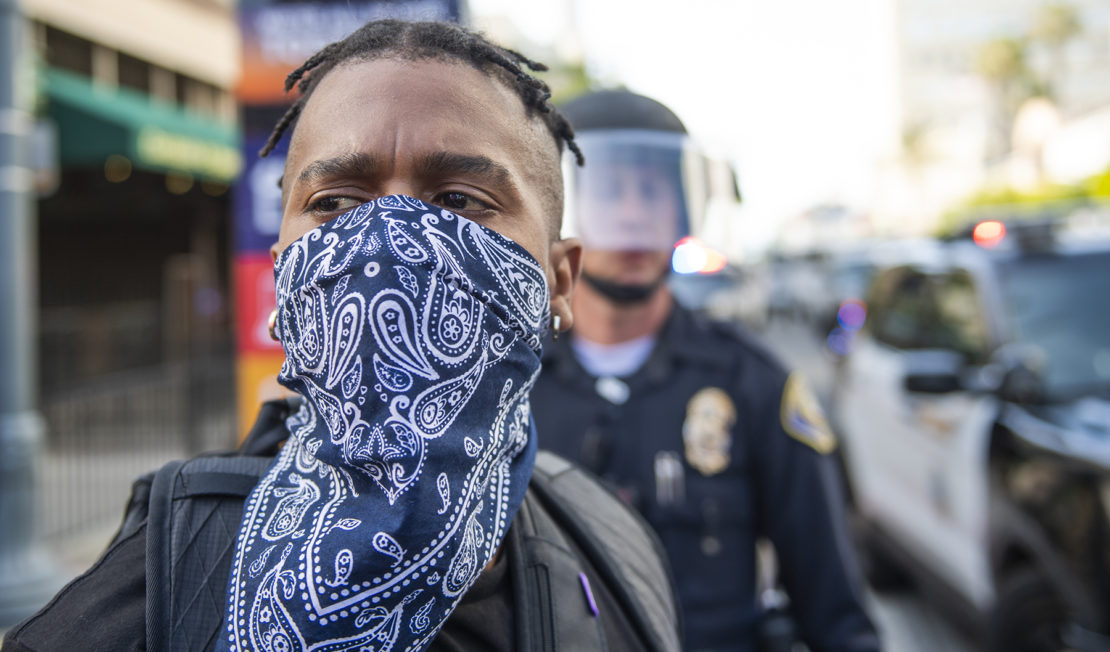 A protester stands in front of the Long Beach police line at Pine Avenue and Broadway during a protest of the death of George Floyd, in Long Beach Sunday, May 31, 2020. Photo by Thomas R. Cordova.

But on the edges of the scene, others were tagging the 7-Eleven with anti-police slogans. Across from the line of officers, someone broke the window to King’s Fishhouse and looters headed inside, carrying out boxes of wine and a trombone case.

As the 8 p.m. curfew hit, Long Beach police lined Pine Avenue and Broadway in an attempt to push back protestors. At one point, police put on face guards in anticipation of possibly firing tear gas as protestors fled down Pine Avenue toward Ocean Boulevard. Most of the protesters dispersed after that.

But calls to police continued, as officers spread through the city responding to reports of looting, often belatedly.

“Sometimes, you get the anger from people saying, ‘Where are the police?’” Chief Luna said during his briefing. “We were everywhere, but it takes time to get there.”

Luna said the department was unable to provide details on how many businesses were damaged, how many arrests were made and how many people may have been injured. “We’re in response mode right now,” he said.