Long Beach police last week revealed the designs of several commemorative coins the department allowed officers to produce, including one that features a vulture on a tombstone and another that displays a polarizing flag banned by some police departments.

Long Beach police provided copies of the designs to the Long Beach Post on Thursday in response to a public records request asking to see all department-approved memorabilia.

The Post requested the records in August after the department distanced itself from a controversial challenge coin featuring a skull and baton that was being sold without department approval.

Police provided designs of eight “challenge coins” that LBPD chiefs have signed off on. Challenge coins are small coins or medallions that are often traded among members of the military or law enforcement to commemorate missions or honor certain units.

The designs range from a cartoonish bag-man for the robbery detail to a cannabis leaf and syringe superimposed on the scales of justice to commemorate the drug investigations section. 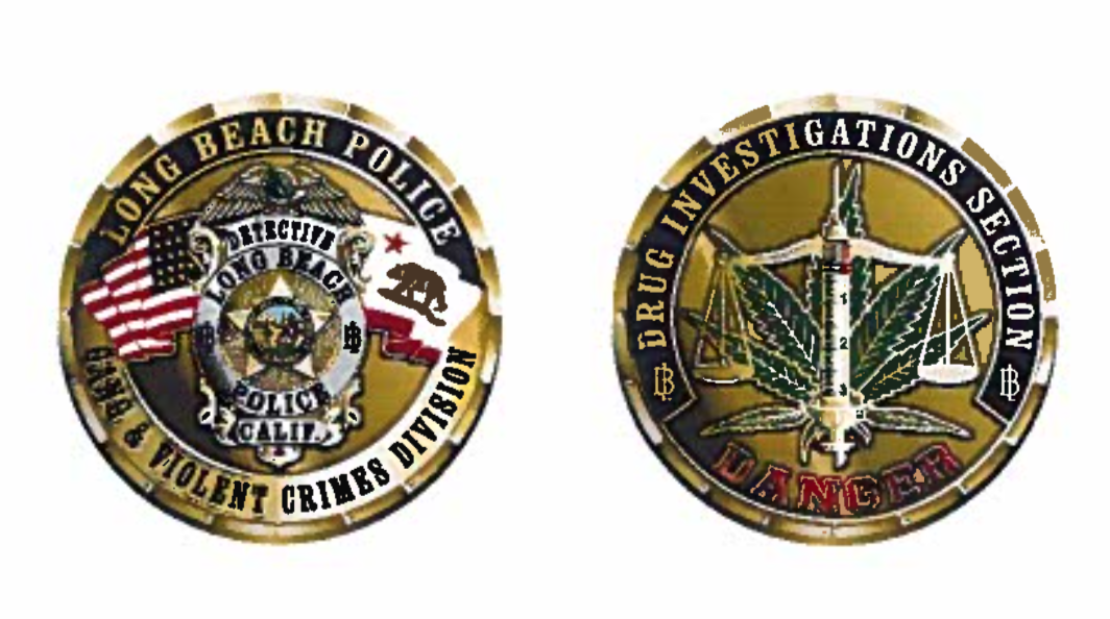 Long Beach’s police chief approved this challenge coin for the drug investigations section in 2013, but noted he was “still not crazy about” the word “danger” being used, according to public records obtained by the Long Beach Post.

A challenge coin made for the homicide division features a vulture on a gravestone and the slogan “Our day begins when your day ends,” something one Long Beach politician said “smacks of ignorance.”

“The idea that a police department would approve something that celebrates the death of others at the cemetery and a buzzard is disgusting,” Councilwoman Jeannine Pearce said. 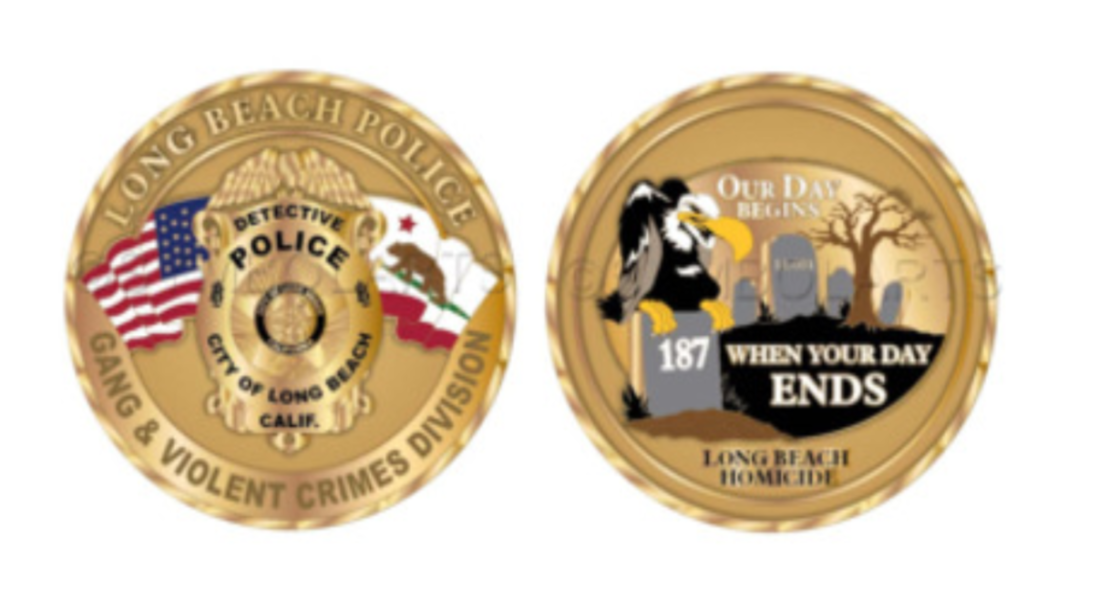 The Long Beach Police Department homicide detail was selling this department-approved challenge coin for $10 in 2015, according to public records obtained by the Long Beach Post. An earlier version of the vulture design was approved at least as early as 2009.

Pearce also took issue with a coin produced for officers assigned to the patrol division in North Long Beach. It features the geographic area filled by a black-and-white American flag with a single blue stripe.

The emblem, known as the “thin blue line” flag, was originally created as a symbol of support for police officers and their families, according to experts. But associations with white supremacist demonstrations and anti–Black Lives Matter groups have made the flag so divisive that some departments have banned officers from displaying it on the job. 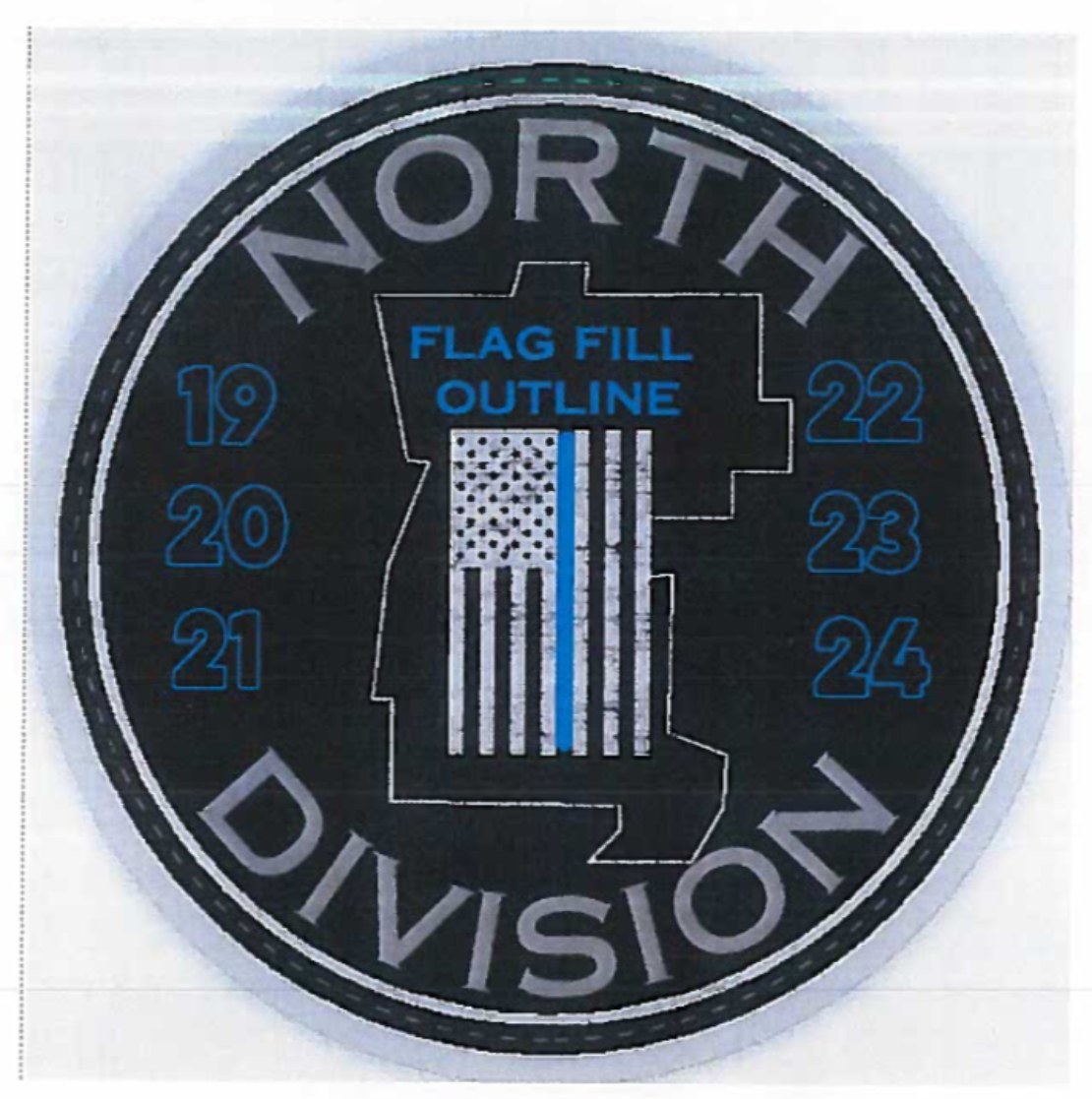 Long Beach Police Chief Robert Luna approved this design for the city’s northern patrol division in 2018. The numbers on the coin are the beats within the division.

“It’s really sort of transformed into a symbol that suggests you can’t be for law enforcement if you are for racial justice or support the Black Lives Matter movement,” said Stephanie L. Hartzell, a Cal State Long Beach professor who studies symbols and how they acquire meaning.

Hartzell said many people view the thin blue line emblem as completely noncontroversial—just a way to show appreciation for police—but the flag itself has been displayed at white supremacist rallies and as part of the Blue Lives Matter movement, which sprung up as a way to try to counter Black Lives Matter.

Hartzell said she would advise police departments to avoid the flag “because it will inevitably stoke further division and conflict with communities that have already been marginalized.”

Long Beach police said they’re reviewing their process for how challenge coins and other memorabilia are approved.

“The current LBPD Command Staff has a heightened awareness of images and language that may be considered unacceptable by today’s community standards,” the department said in a statement. “However, the department has limited options to address memorabilia that was approved under past administrations and paid for with private funding.” 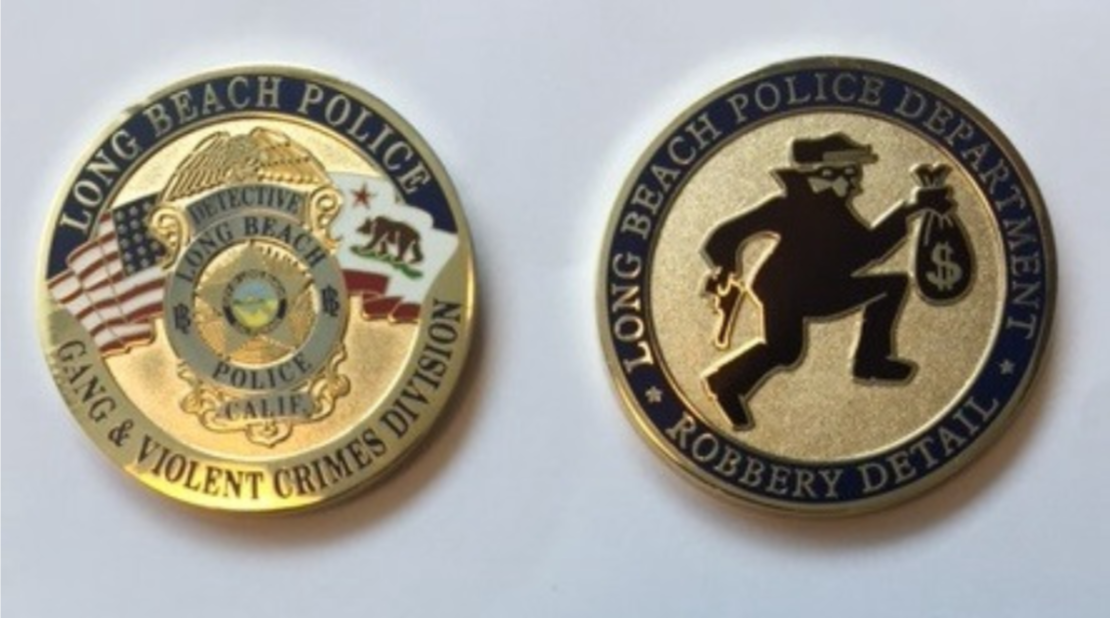 The Long Beach Police Department robbery detail was selling this department-approved challenge coin for $10 in 2015, according to public records obtained by the Long Beach Post.

The coins are not distributed by the department. They are typically designed and then sold by officers after getting approval from the chief’s office.

The homicide coin with the vulture has existed in some form since at least 2009 when it was approved by then-Chief Anthony Batts, according to records provided by the department.

Chief Robert Luna signed off on the North Division design in 2018. Under a section of the approval form labeled “Potential Controversy,” someone wrote, “None.”

The two councilmen who represent the northern part of Long Beach mostly agreed with that sentiment.

“I don’t think this coin is an issue,” Councilman Rex Richardson said.

Richardson said he understands the politics of the thin blue line flag, but most people in his council district are more focused on raising their families than “looking for things to be pissed off about.”

Councilman Al Austin, who also represents part of the area depicted on the challenge coin, said he doesn’t believe any harm was meant by the design. Just about any symbol can become divisive, he said.

“I think we need to be sensitive about the use of the flag always, but the flag in itself is offensive to some people these days—the thin blue line flag and the American flag,” he said. “That’s just the moment we’re in now.”

Councilwoman Pearce saw it differently. She called it problematic to have the flag used in Blue Lives Matter rallies laid over a map of historically Black neighborhoods.

She said the department needs to try hard to confront a racist past and gain more credibility with those same neighborhoods.

“When that’s not happening and we have symbols like challenge coins that could symbolize racism to some people, that’s not acceptable,” she said.