Long Beach police say they’re investigating whether any of its employees were involved in producing or selling a “derogatory” commemorative coin that refers to civil unrest and protests earlier this year as “riots.”

The coin appears to reference Long Beach’s massive May 31 demonstration against police brutality and racism, which was followed by looting across the city. Its design includes an “LB” logo along with the words “Long Beach Police Dept” and “2020 riots.”

On the opposite side, there’s an illustration of a skull wearing a helmet and the words “hats & bats,” a nickname for the riot baton and helmets used by police officers during civil unrest.

After images of the coin’s design started circulating on social media, Long Beach police officials called it unauthorized and derogatory.

“This memorabilia was not sanctioned or approved by our department and does not reflect our professional standards, core values, and commitment to our community,” the LBPD said in a statement.

The Long Beach Police Officers Association also disavowed any connection to the coin or the store selling it.

Similar memorabilia, known as challenge coins, are common in law enforcement and the military, with members often trading or collecting them.

Several Long Beach police units—such as the robbery and homicide teams—have coins of their own, as does the Long Beach Police Officers Association, according to two police employees.

Typically, any LBPD employee who wants to make or sell an LBPD-branded coin, patch or other item must get clearance through the chain of command, according to the department.

It’s not yet clear if any police employees were involved in creating the “2020 riots” coin, but nobody got approval for it, the LBPD said.

The coin was listed for sale on a website called Clear Hot Gear. The Whittier-based site sells tactical equipment, clothes and memorabilia. Much of it’s branded with the American flag, the thin-blue line or other law enforcement or military motifs.

Some of the merchandise is city specific, with LB, LA or HB logos.

A section of the website is dedicated to “2020 riots” gear, including patches, shirts and challenge coins referencing the LBPD and LAPD. 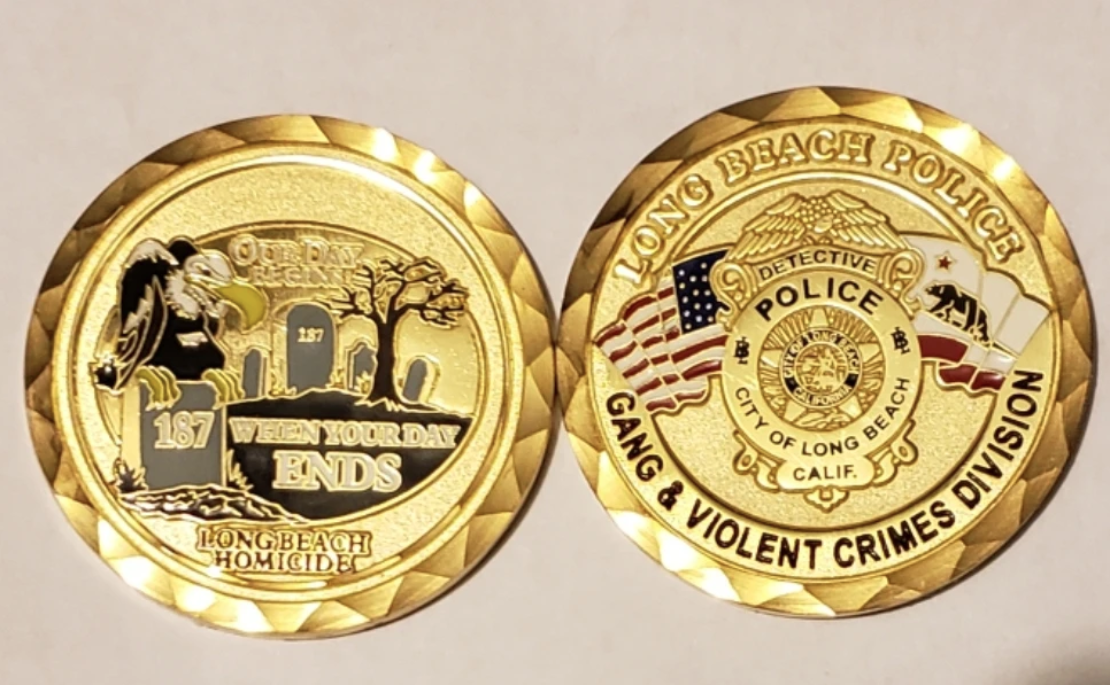 An LBPD homicide unit challenge coin for sale by Clear Hot Gear. The company claimed it was department-approved. Screenshot from clearhotgear.com.

On June 30, the company advertised a T-shirt reportedly made as a fundraiser for an LBPD officer who died in a motorcycle crash. And on June 2, the company’s Facebook page featured a picture reportedly taken in Downtown Long Beach that showed a riot helmet and a bag of less-lethal foam bullets like the ones LBPD officers used during the recent protests.