Everybody says our greatest weakness here in The Backroom is our abiding humility, our deference to the spotlight or any demand for reward or recognition. But we’d like to take a moment to let you know, our dearest reader, that when your day ends, our day begins.

Did you get that? When your day ends, OUR DAY BEGINS.

In case it wasn’t clear, let’s etch it onto little pieces of shiny metal and exchange them and look down on other people who don’t have them and then we’ll play drinking games and pogs or whatever else people do with these so-called “challenge coins.”

The Long Beach homicide detail has one that features the “when your day begins” slogan alongside a vulture, which can symbolize life and death (though mostly death). Robbery has one with a masked man bolting down the street toting a bag of cash with a dollar sign on it, like he just held up Scrooge McDuck. 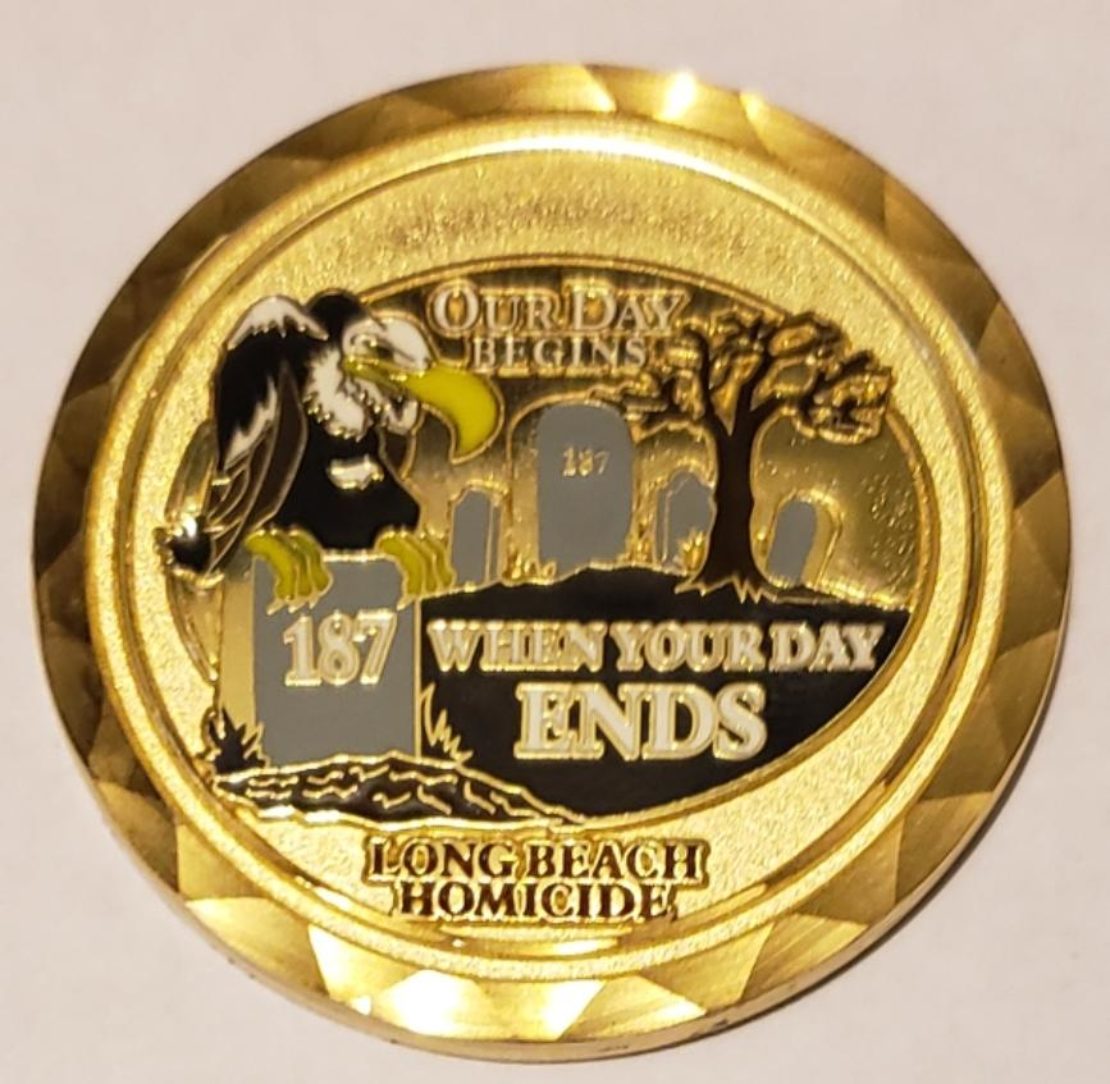 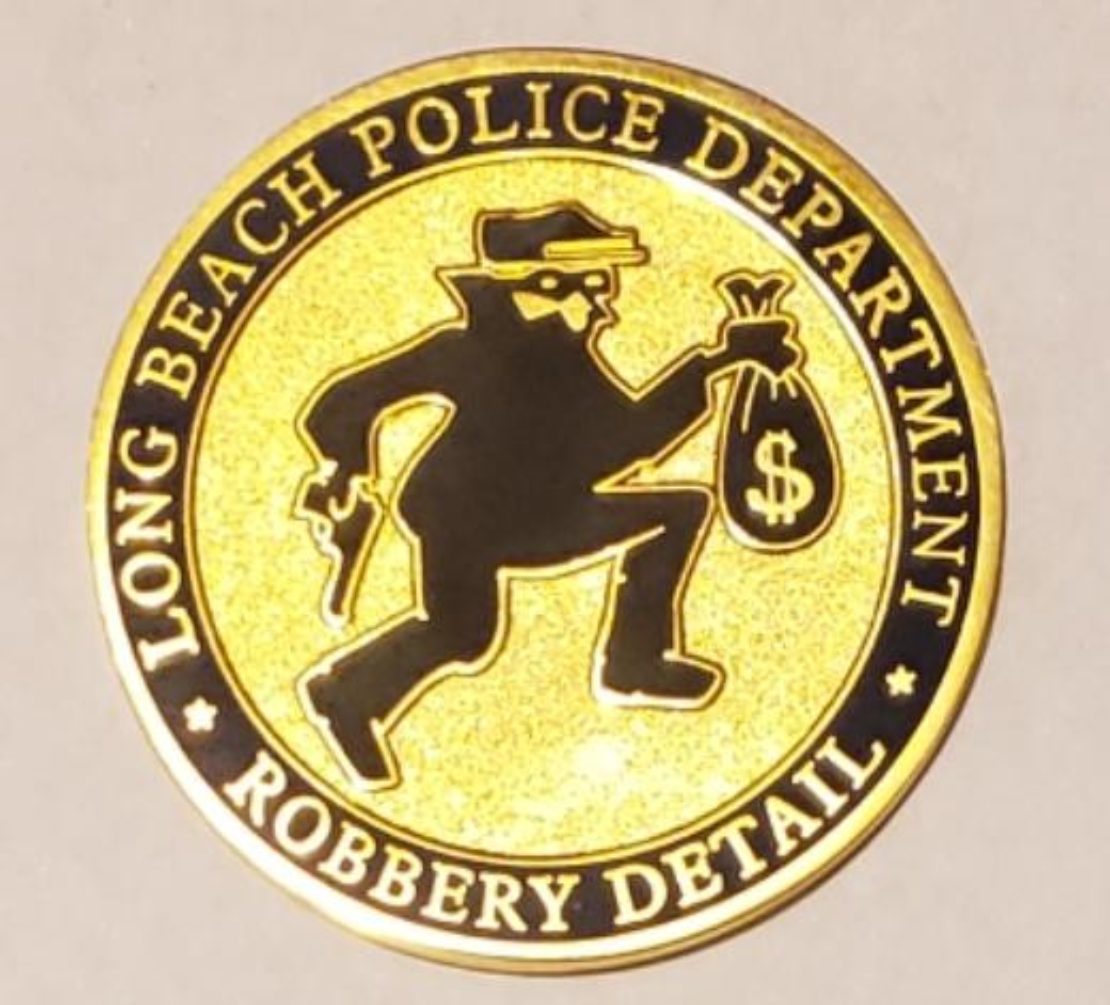 Burglary is cartoonishly similar, featuring a sly crook wearing a mask over his eyes—the reason everybody names raccoons Bandit—who looks like the Hamburglar branching out into the cat burglary business.

Challenge coins can also commemorate military campaigns and police skirmishes, and that’s where things turn a little dark in the otherwise harmless, almost childlike (we can’t get Girl Scout badges out of our head) business of collecting these coins.

The latest batch to come off the mint are for those members of law enforcement who survived the recent bit of unpleasantness in Long Beach when a largely peaceful protest turned ugly after looters broke into quite a few establishments in and around Downtown. To help keep the night fresh in the memories of police officers who were involved, the coin’s front features the words “Long Beach Police Department” and “2020 Riots,” while the back is a tad more graphic, with a person wearing a gas mask, face shield and helmet, above a criss crossed baton and rubber-bullet launcher and the slogan “Hats & Bats.” Unlike the other coins mentioned here, “Hats & Bats” was not authorized by the LBPD.

Being a student of semiotics, the coin that The Backroom has the greatest hankering for is the homicide detail one, “Our day begins…” with the vulture which, yes, symbolizes death, but the bird also symbolizes (and we’re not sure if the homicide folks know this) a time to break free from the shackles of one’s own ego.

When The Backroom tells you we love politics, that love doesn’t stretch all the way down to the Republican National Convention, featuring the Trump Family of Entertainers. Warning: Don’t play the drinking game in which you down a Shoot the Root every time a member of the Trump family tells a blatant lie. We played this and we had Xs for eyes before Donald Trump, who plays the strict but bumbling dad on the show, was wrapping up the first minute of his Day One speech.

By the time Tiffany Trump came on Tuesday night (she plays the sassy outcast sister, who only a father could love, but, sadly, doesn’t) we were rummaging around in our bathroom cabinet frantically looking for any color or shape of pharmaceutical.

On Wednesday, we called Stacy Mungo, the councilwoman who helms the Fightin’ 5th District and presumably the only Republican on the council, to find out how she was enjoying the convention coverage.

“I haven’t watched any of it,” she said as we slammed a Shoot the Root.

“I’m too busy,” she said. “I have two full-time jobs and a 2-year-old and we’re doing some home improvement so I have to deal with a contractor, too.”

Yeah, well we’re busy too, with a full-time job and a backlog of Netflix comedy specials that aren’t going to view themselves.

“What surprises me,” said Mungo, “is I haven’t read anything in The Backroom about the budget.”

So, we’ll take that as a Reader Request—and an effective way to change the subject.

Here’s the story: The budget is, in charitable and generous terms, a mess. We haven’t, in our collective two centuries in this business, seen anything like it. And, rather than make painful cuts, your mayor and city council seem to prefer dipping into the city’s dwindling surplus, and by “dipping into,” we mean “using all of.”

City employees, of the unsworn type, have agreed to take 26 furlough days—including City Manager Tom Modica, which helps a little—while the police department has magnanimously cut a handful of positions that aren’t currently staffed.

But the city’s elected leaders are hesitant to make any punishing cuts, and that hesitancy has prompted Modica and finance director John Gross to remind them of, as our parents would say, “consequences.”

We get that it’s tough. Who wants to close neighborhood libraries, or cut paramedic services, or lay off an animal care veterinarian? But if you’re not willing to meaningfully slash into the police department, which consumes nearly half the budget—forget politics; we’re talking only about finances—then something else has to go.

You pick it. No water for trees and grass in the parks? No new books and fewer days open at the libraries? Kick a veterinarian and other workers out of Animal Control? Or just break open the piggy bank and put off financial Armageddon for another year.

Give us the report

Here’s another story that feels like it happened 10 years ago: The Long Beach City College Board of Trustees—a reliable well of material for the Backroom —fired superintendent-president Reagan Romali just last March. Through a health pandemic, weeks of civil unrest and an economic collapse, the LBCC board is still investigating Romali, as well as one of its own: Trustee Sunny Zia.

The trustees held a closed-door meeting last week and had another scheduled for this week, we hear to discuss the now-completed investigation report, the cost of which is approaching $250,000.

We’ve also heard differing accounts of the significance of the report, ranging from humongous to something shy of a hill of beans.

But the frustrating part of this for us is that a quarter-million in taxpayer money has been spent for an investigation that the public may never get to see. The report, rumor has it, is locked somewhere in a SKIFF in the basement, with the college sure to cite “personnel privacy” as a way to withhold it from public view.

We’ll find it. Don’t you worry.

In the bitter and hotly contested battle between Robert Fox and Cindy Allen to be the boss of Council District 2, Allen bagged what may be an important, yet curious, endorsement this week from the incumbent Jeannine Pearce who, you’ll recall, has been the most forceful voice on the council for police reform, which, while that’s not saying much, you’d think would prevent her from cozying up to Allen, a former cop who’s married to a former cop and who we’re guessing spend a lot of time in their little condo griping about people who are forceful voices of police reform.

If The Backroom was cynical and trained in classical Latin rather than merely a country columnist collective that’s always looking on the sunny side of things, we’d suspect some quid pro quo involved in the endorsement.