Even the most hopeful outcomes for abuse survivors, whether human, cat, bird, rabbit or fluffy little dog, don’t always suggest happy endings tied up with a bow. Even in the best scenarios, many who suffered the abuse have to deal with its aftereffects, sometimes for a lifetime.

Chloe, the little white dog whom a resident discovered near death, wrapped in a plastic bag and covered with food waste and human urine, is one case. Her situation was once described by a veterinary-clinic employee as “the worst case of abuse I’ve seen in 30 years.” Chloe was barely a year old and had snapped legs and multiple bruises. Her skull had been fractured.

The severity of the abuse struck a nerve. When the Long Beach Post broke her story on Dec. 8, 2018, other media immediately picked it up. Horrified sympathizers as far away as Australia were sending prayers and contributions to pay her expensive medical bills.

Nonprofit spay/neuter organization Fix Long Beach carried out the rescue and sponsored the recovery. With financial assistance from Just Food for Dogs and contributions from the public, Fix Long Beach offered a reward of $25,000 for anyone offering verifiable information about the crime, preferably a video showing the actual abuse.

As of this writing, the abuser has not been identified. Chloe, however, made a slow but seemingly complete recovery. Her immense fan base on her Saving Chloe Facebook page followed her story—donations continued to pour in, and so did adoption requests. When it was safe to send Chloe home, volunteers winnowed down the applications, and the little dog finally went to live with Maryanne and Tiny James. The Jameses, no novices to pets with special needs, took care of Chloe’s remaining medical issues, kept her fur snowy and fluffy, and spoiled her silly with quality food and enough toys to entertain a doggie play group.

Chloe’s playfulness and joy is thanks to people who stepped up and the love showered on her by her humans.

But the credits haven’t rolled, and no closing theme is playing. The abuse has taken its physical and emotional toll on an undeserving, innocent creature.

“On Monday afternoon, Chloe got up off the couch and threw up everywhere,” Maryanne James said on Sept. 9. “Within two minutes, she runs for the back door, has an accident, and has diarrhea all over the house. And I thought, my God, there’s something really wrong her.”

Maryanne said that when she went over to comfort Chloe, the dog ducked her head and looked at her with apparent fear.

“I thought, she’s frightened. Maybe she thinks she’s going to get scolded or hurt. I thought, I’ve never, ever seen her do this, except when I first got her,” Maryanne said. “I thought, well, this is very unusual—maybe before we got her, she was going potty in the house. I told her, ‘It’s OK—you have to go potty, no problem, you’re a good girl.’ So, there I was rewarding her for going potty in the house! I was worried about what she’s thinking.”

The next morning, Chloe woke up Tiny to use the bathroom. Instead of jumping on him, as she usually did, she weakly pawed at him. The Jameses noted that her back feet were wobbly and that she couldn’t manage the single step leading back into the house. Their regular vet was closed, so they brought her to Long Beach Animal Emergency, which had cared for Chloe during much of her recovery. They suggested an allergic reaction and kept her overnight.

The next day, the Jameses rushed her to their regular veterinarian, Maggie Gamble, DVM, at Parkview Pet Hospital and Clinic. Gamble knew Chloe’s history and did not think it was an allergy. Some of the symptoms Maryanne and Tiny reported—not eating, licking her lips, belching—were signs of intestinal reflux.

When Chloe didn’t sufficiently respond to the medication prescribed by Gamble on the following day, she conducted an ultrasound. The results showed gastroduodenal and gastroesophageal reflux. This caused painful contractions from food pushing backward into the stomach, causing what manifests in humans as heartburn. Then, Gamble found something else.

“Maryanne and Tiny mentioned that she was drinking a lot of water,” she said. “I found that Chloe’s urine was watery—it wasn’t yellow enough. It looked like a kidney infection and kidney damage, which is atypical for a dog who’s 2 years old.”

“Not only were all her organs shutting down but she was hurt at the hands of someone else who was literally breaking and snapping her limbs,” Maryanne said of the past abuse. “She had a double whammy going on there. Her kidneys were already in failure when she was rescued back then. But she was a fighter, and the doctors were fighters to keep her alive. They got back all the functions they could, but there was already damage done that can’t be reversed no matter what you do.”

None of this presented in the year and a half that the Jameses had Chloe until it became a problem. Although she mentioned a slight chance of poor kidney function being heritable, Gamble said that Chloe’s previous history suggested trauma was the cause.

“Trauma could be from being thrown against a wall, thrown into a dumpster,” she said. “Also, she could have been in shock after the incidents and have low blood pressure. She couldn’t move around in that dumpster, and that means a horrible problem for circulation. Not enough of the blood was going to an essential organ. There’s no way of proving it 100%, but her kidneys are like those of an older dog. A number of things could have caused this, and abuse is high on the list.”

Because of all this, Gamble said that Chloe might have a shorter lifespan than normal.

“It’s hard to say,” she said. “One thing leads to another. There’s a domino effect. Something’s messing up the intestine, possibly her pre-care—a bad diet, worms, neglect and abuse. But this can be managed with diet and medicine, and our job is to slow it down as much as possible.” 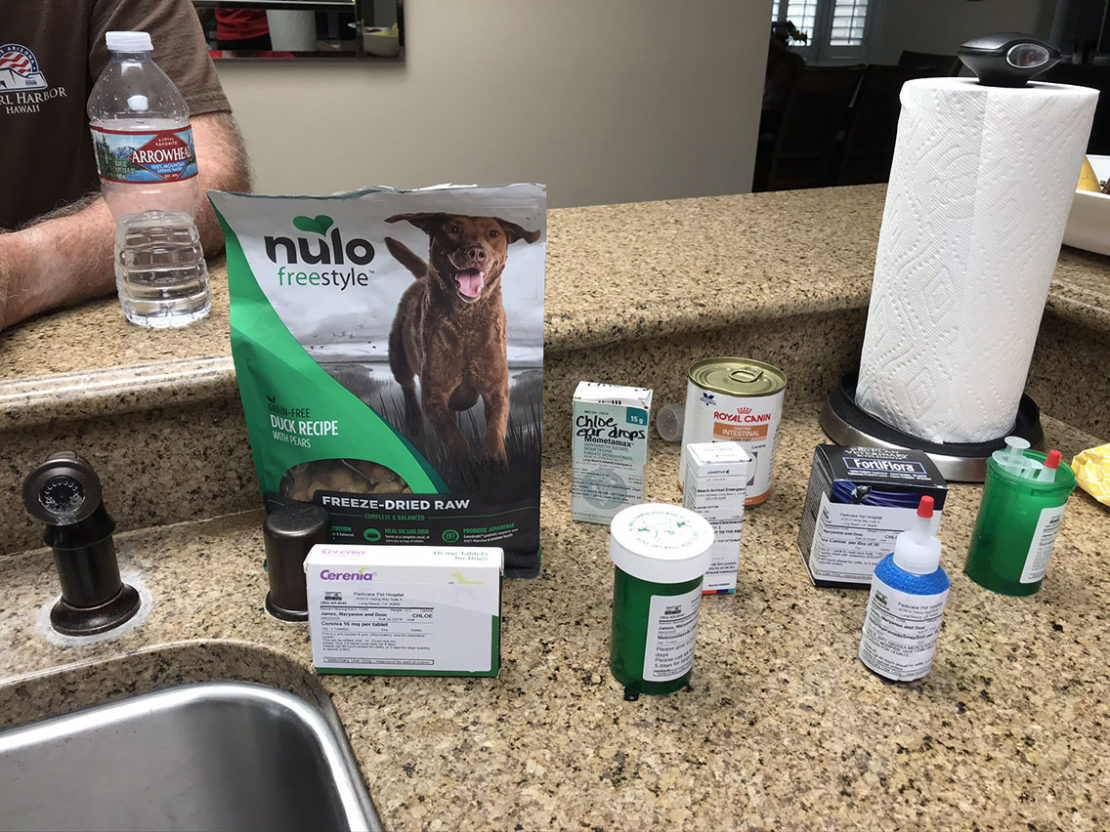 Chloe will be on meds for the rest of her life. Maryanne James said that she will also transition to a prescription food for kidneys. Photo by Kate Karp

But as Maryanne said, Chloe’s a fighter. Furthermore, she has Maryanne and Tiny in her corner, and they’ll continue to give her the life she should have had from the beginning.

“I feel anger and resentment, but mainly sadness for her that she has to go through this again,” Tiny said. “We were hoping she’d have a normal life after the abuse, and now we find that the abuse is going to follow her.”

Chloe’s abuse case is still open. Fix Long Beach and Just Food for Pets are offering a $25,000 reward for information leading to the arrest of Chloe’s abuser. Call the Special Investigations Division of the Long Beach Police Department at 562-570-7250 or email [email protected] if you have any information about the case. 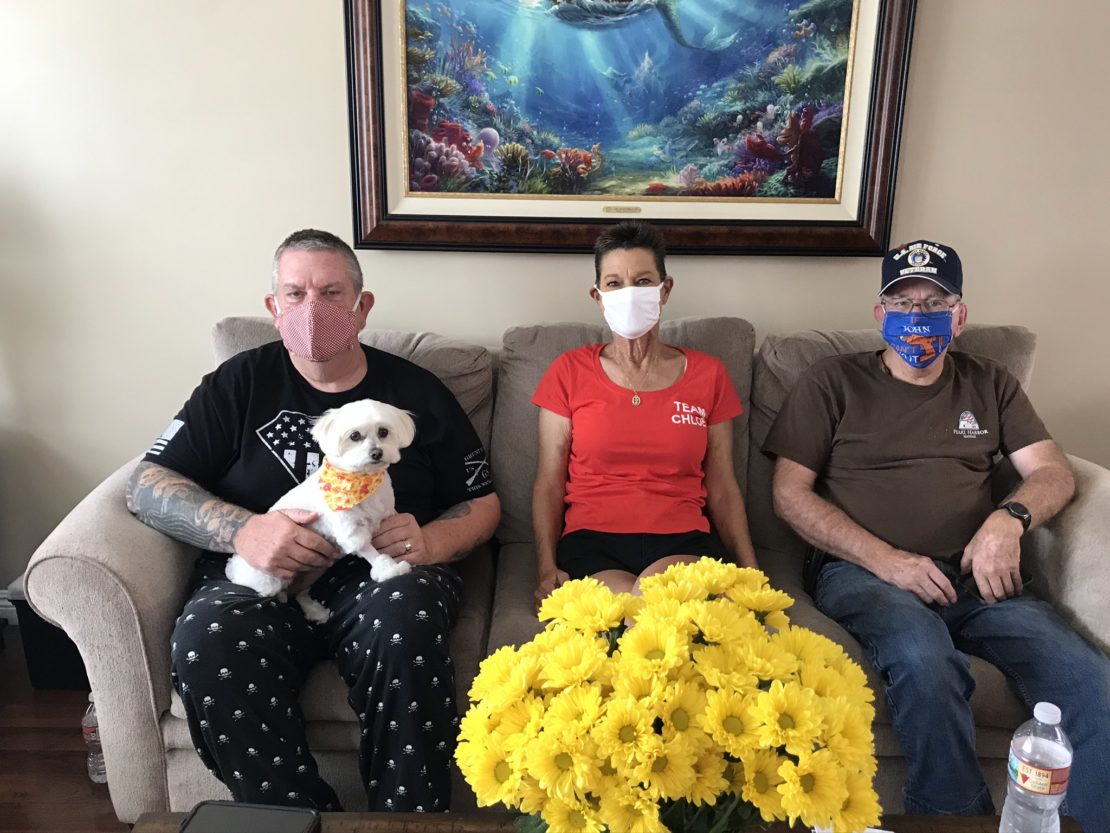 “Chloe was everybody’s baby, and we want to keep people up to date about her—people still follow her,” Maryanne James said. From left, Douglas “Tiny” James, with Chloe; Maryanne James; and “Papa” John Vanderpoel, The Jameses neighbor and Chloe’s favorite uncle. Photo by Kate Karp

The Jameses would appreciate any help with her medical bills, which now total $2,400. Chloe will need medical care for the rest of her life and may need surgery. If you want to donate toward Chloe’s medical bills, her Venmo and Zelle account may be accessed at [email protected] and 562-310-3890. The couple has offered to make Chloe’s medical records available upon request.

Please report any suspected animal abuse to your city’s shelter. Long Beach’s general phone number is  562-570-7387. If you’re in an abusive situation and need help, reach out to an approved domestic violence shelter.