A handful of people gathered at the corner of Broadway and Junipero Avenue Thursday afternoon for the public unveiling of the first updated rainbow crosswalk, which now features new colors taken from the progress pride flag.

That flag, which adds a five-striped chevron to the left side of the rainbow covered pride flag, is meant to celebrate the diversity of the LGBTQIA+ community and calls for a more inclusive society. The progress pride flag was created in 2018 by American artist and designer Daniel Quasar and incorporates elements of the original 1978 design by Gilbert Baker and the transgender flag created by Monica Helms in 1999.

Mia Farrow, a local drag queen and activist who attended the event, said the rainbow crosswalks send the message that, “everyone belongs in Long Beach.”

“For so many years we continued to be oppressed, and even now as things are going in what seems like regressing, we have to be a lot more vocal, visible and we have to stand for our allies,” she said. “This to me lets me know that there are people within my city that will always have my back.”

The city first introduced the rainbow-striped continental crosswalks in 2016 to the Broadway Corridor as a way to symbolize pride for the LGBTQIA+ community while creating safer intersections for pedestrians, cyclists and drivers. Crosswalks on the Broadway Corridor at Junipero, Cherry, Falcon and Orange avenues were all painted as part of a vision by then-Councilmember Suja Lowenthal.

On Thursday, the Broadway and Junipero crosswalks became the first of five intersections to be updated with new colors: black and brown stripes to represent marginalized LGBTQIA+ communities of color and pink, light blue and white to include components of the transgender pride flag. Newport, Cherry, Falcon and Orange Avenues will also be updated during the first week of July, city officials said. 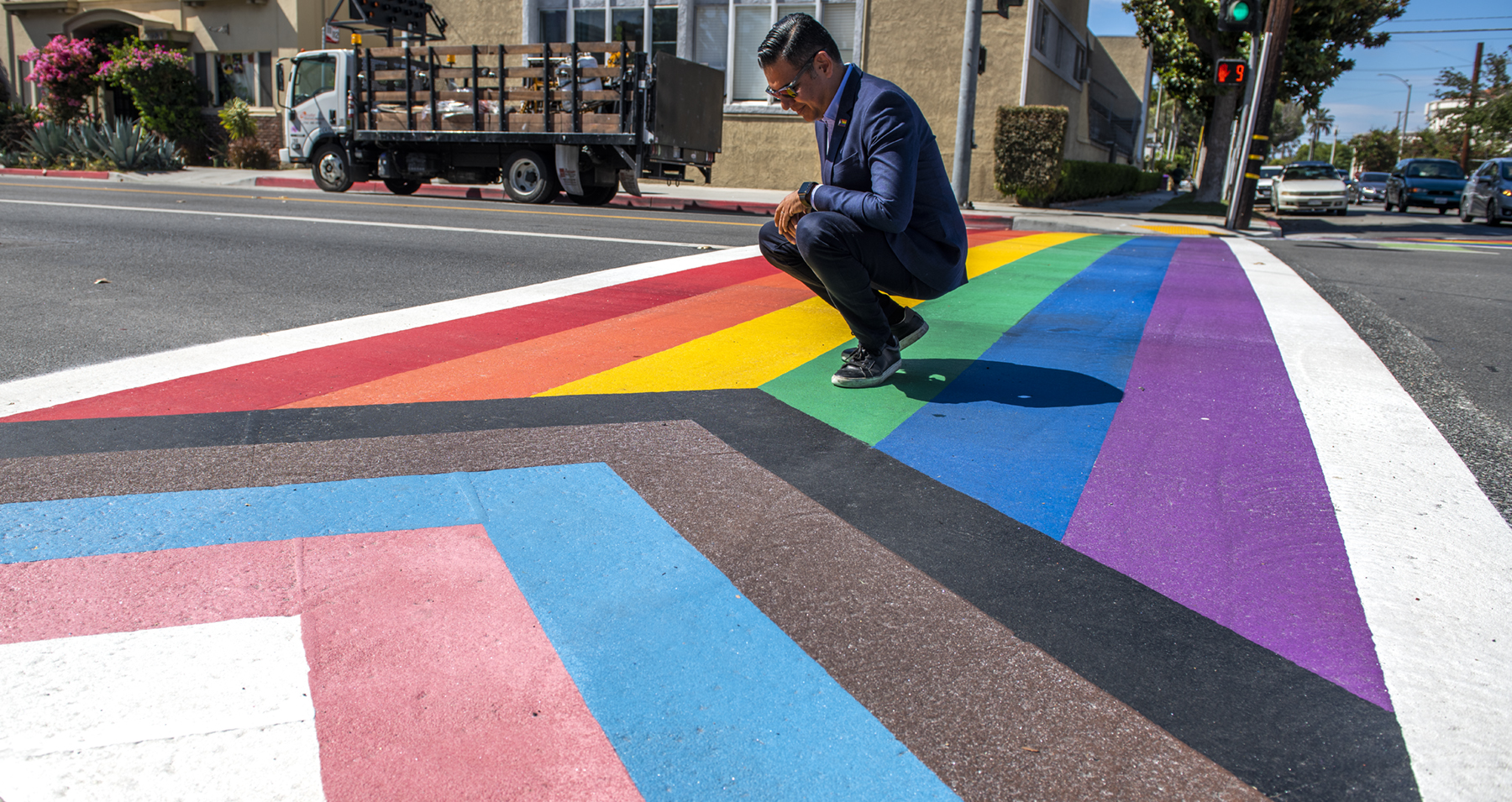 Mayor Robert Garcia kneels on the updated pride crosswalks, which feature the progress pride colors including black and brown stripes to represent marginalized LGBTQ+ communities of color, and the colors pink, light blue and white to incorporate elements of the transgender pride flag. Photo by Thomas R. Cordova.

“We do have a very big gay community, a very big trans community,” Farrow said. “We’re finally being seen, we’re not getting ostracized anymore.”

Earlier this month, Mayor Robert Garcia, the city’s first openly gay mayor, proposed to officially recognize the Broadway Corridor—with its rainbow crosswalks and Pride flags flapping in the wind outside of LGBTQIA+-owned businesses—as a cultural district.

“Clearly identifying the Broadway Corridor as a space that has a significance to the community,” Garcia said then. “Everyone knows it as the heart of the LGBTQ community but if there’s a way to make sure that history is preserved, that’s what we’re trying to do.”