The Long Beach City Council took a final step toward adopting a plan that will guide development of 437 acres of coveted land west of Long Beach Airport, saying they wanted the former Boeing C-17 manufacturing site to become a “21st century business district.”

The Globemaster Corridor Specific Plan includes parcels that run along Spring Street from California Avenue to the airport’s main runway west of Redondo Avenue. Other parcels run along Cherry Avenue between Spring and Carson streets.

They include a blend of commercial, industrial, business park and airport parcels, which could bring a mix of hotels, retail, restaurants and newer manufacturing businesses to the area. No residential parcels are included in the Globemaster plan.

The plan has been in the works since 2014 when it became clear that Boeing began closing its C-17 Globemaster III production facility after the Department of Defense notified the company it would no longer be ordering military cargo planes.

Boeing sold the former C-17 production site to the Goodman Group in 2019.

“This plan establishes a vision, it establishes what we want Cherry to look like in the future, but that’s not tomorrow,” Long Beach Development Services Deputy Director Chris Koontz said.

What the stretch of Cherry Avenue could look like is not set in stone, but Koontz said that over the years residents have made it clear that they don’t want “dead warehousing” along the corridor. A special zoning exemption could allow for retail and dining to be developed along the front of the Cherry Avenue corridor much like it is on the eastern side of the airport at the Long Beach Exchange. 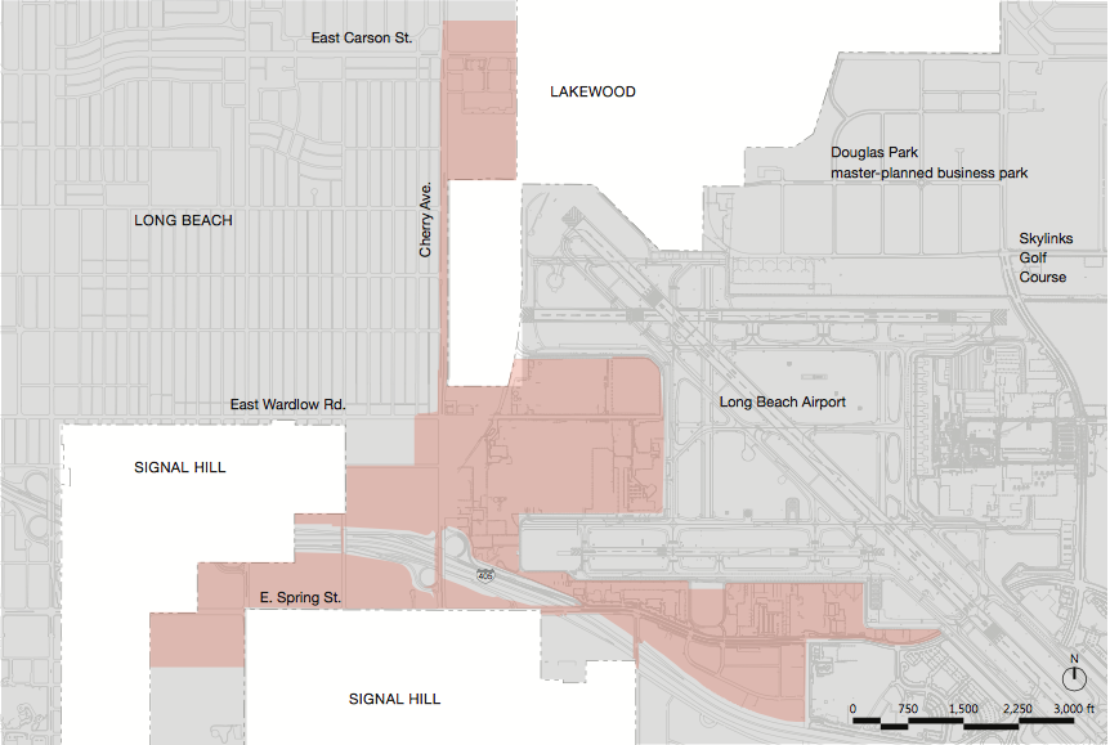 An outline of the Globemaster Corridor Specific Plan shown in red. Photo courtesy of city of Long Beach

There, a shopping center, restaurants and gyms are the front of a much larger commercial development where businesses like Virgin Orbit and Universal Technical Institute have leased office space. That portion of the Globemaster plan is located southeast of the intersection of Wardlow Road and Cherry Avenue.

Some minor changes were made to the plan at the request of Councilwoman Stacy Mungo Flanigan, one of two council members who represent areas near the airport. Mungo Flanigan asked that the plan bar any properties from serving as storage for shipping containers, something that roiled the surrounding communities last fall.

Mungo Flanigan also asked the city to work with neighboring cities (Lakewood and Signal Hill) on potential traffic impacts brought on by future development. The council also agreed that existing businesses that don’t conform to the zoning changes would be given a 10-year window to comply with allowed usages outlined in the plan.

Koontz clarified that window would likely only apply to a few businesses, notably the Enterprise rental car location and a car wash located at the corner of Cherry Avenue and Wardlow Road.

Koontz said the area is likely to have new tenant announcements coming soon.

“For the large parcels we expect projects to be entitled this calendar year and for you to see new, exciting companies employing hundreds and thousands of people during calendar year 2022,” Koontz said.

Other members of the council were supportive of the plan and its potential to bring back jobs to the area. Councilman Al Austin recognized that there may be traffic impacts brought on by the development but said that the area had more traffic in past decades when thousands of workers commuted there to aerospace and aviation jobs that have since left the city.

“It was impactful, but I think impactful in a positive way and I hope we can get back to that soon,” Austin said.

A procedural vote at the next council meeting will make the plan official, but implementation will be incremental as the city works to attract new business to the area and to make improvements to the two main corridors. The city recently put out a request for proposal for one parcel earlier this year and Gulfstream’s departure last year has freed up other land in the Globemaster plan’s footprint.